Vlad Sokhin - Crying Meri: Violence Against Women in Papua New GuineaAccording to the statistics, in Papua New Guinea two thirds of women are constantly exposed to domestic violence and about 50% of women become victims of sexual assaults.  Local men don’t respect their meris (“meri” in Pidgin means “woman”), constantly beating them, often using bush knives and axes.While in traditional villages such attitudes toward women can be attributed to tribal culture, today in Port Moresby violence against women shocks modern society. The main danger comes from the Raskol gangs that rule the settlements in the capital city. Raping women is a “must” for the young members of the gang. In most Papua tribes, when a boy wants to become a man, he should go to enemy’s village and kill a pig. After that, his community will accept him as an adult. In industrial Port Moresby women have replaced pigs.It is very rare that violence-against-women cases are brought to court. Most assailants are kept in a prison cell at the police station for a couple of days and then released. The police claim the lack of conviction stems from the fact that victims often fear filing a statement or that many wives take pity on their husbands and insist on the termination of the case. According to the Family Support Center’s statistics, more and more violence against women happens in middle class families, where lawyers, policemen or even church pastors strike their wives. Rejected and beaten women are often kicked out of home to the street, where they became easy targets for the Raskol gangs. 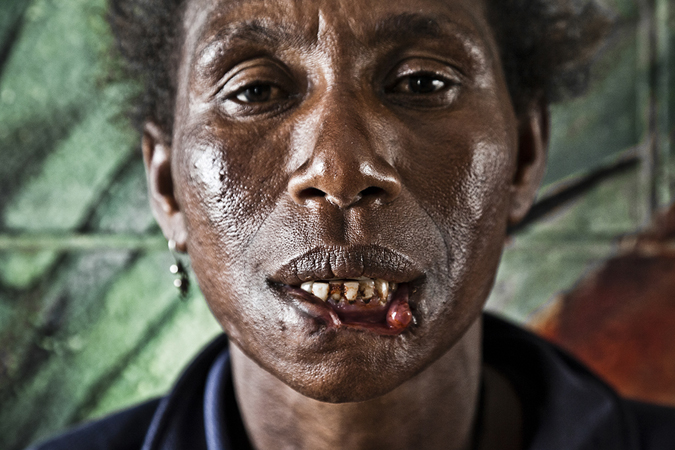 Helena Michael (40), mother of seven children. On December 27th (2011) she was attacked by a "cannibal" near the Boroko police station, in the central part of Port Moresby. The attacker bit off Helena's lower lip and wanted to sink his teeth into her throat. The woman managed to escape by kicking her assailant in his testicles and biting three of his fingers forcing him to release her. Police arrested the man and found out that it was his third attempt to eat human flesh. Having spent three days in the hospital, Helena went to the police station to initiate criminal proceedings against the cannibal, but discovered that he had been released due to the lack of complaints. Helena is still waiting for the hospital’s approval to start surgery for skin graft on her missing lip. 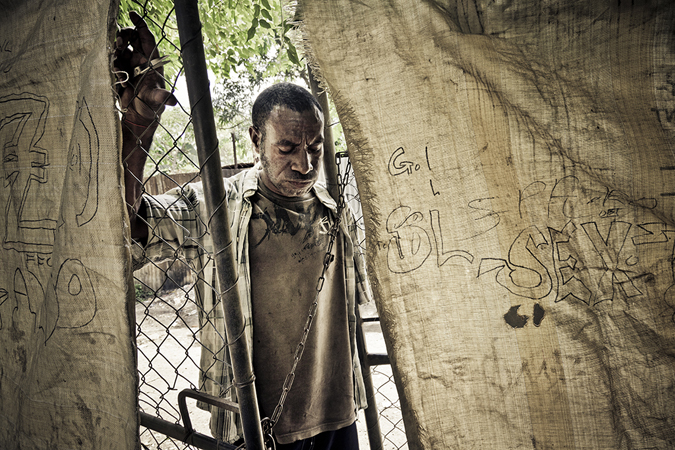 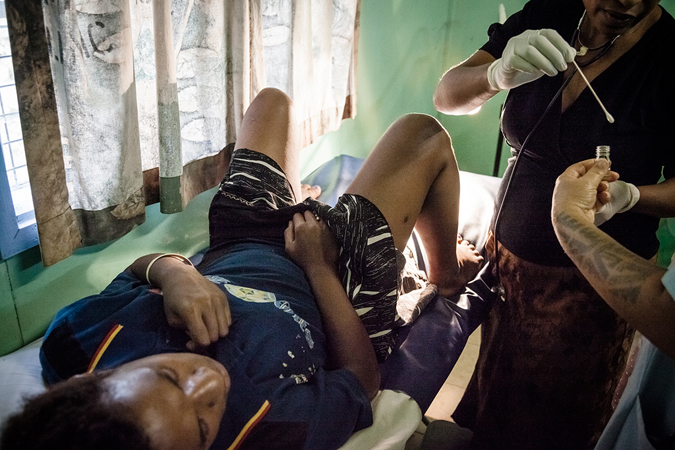 Gynecologist Dr. Freeda Wemin examines the genitals of 14-year-old Freda Masked, who was raped by a 40-year-old lawyer. Freda said that the man was a friend of her family and she didn’t suspect anything when he offered her a lift to the market. Instead he drove Freda to his house, raped her and then left her on the road of the settlement. Freda’s father brought his daughter to the hospital but wasn’t sure if he wanted to sue the rapist.Richard Bal (45) shows disfigured ear of his wife Agita Bal (32) in the Morobe block, Port Moresby. In December of 2010 after coming home drunk, Richard took a bush-knife and cut half of Agita’s left ear. He spent one night in the police station and was released next morning due to "insufficient evidence" to initiate criminal proceedings. Agita’s relatives didn’t allow her to leave Richard, having received 500 kina (about 240 USD) from him for the “potential damage”. 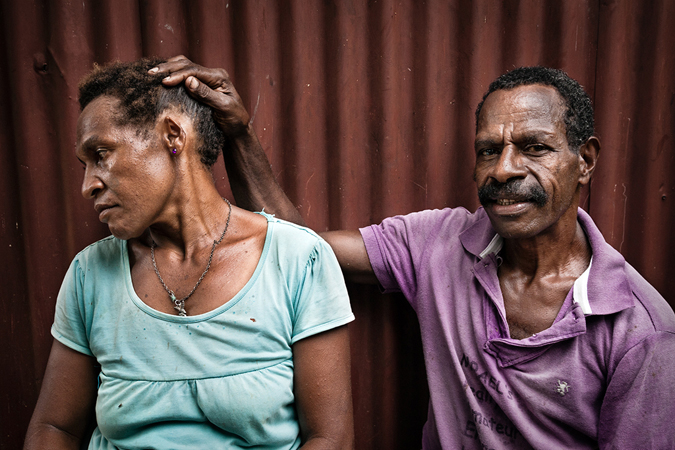 Richard Bal (45) shows disfigured ear of his wife Agita Bal (32) in the Morobe block, Port Moresby. In December of 2010 after coming home drunk, Richard took a bush-knife and cut half of Agita’s left ear. He spent one night in the police station and was released next morning due to "insufficient evidence" to initiate criminal proceedings. Agita’s relatives didn’t allow her to leave Richard, having received 500 kina (about 240 USD) from him for the “potential damage”. 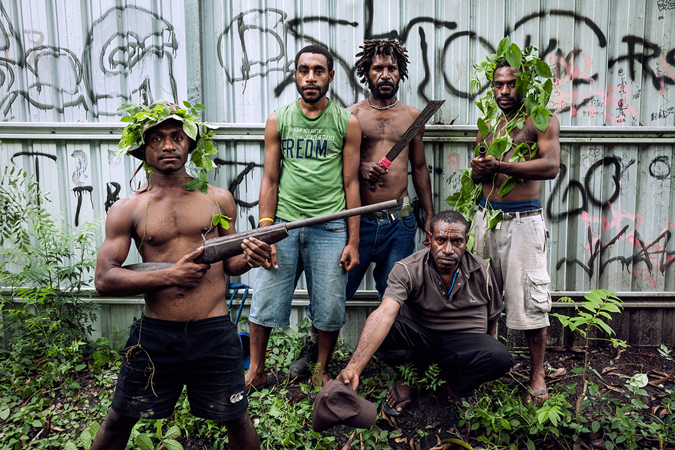 Members of the Raskol gang “Dirty Dons 585”, Nine Mile Settlement, Port Moresby. All of these young men committed a set of rapes and armed robberies. The gang members admit that two thirds of their victims are women. 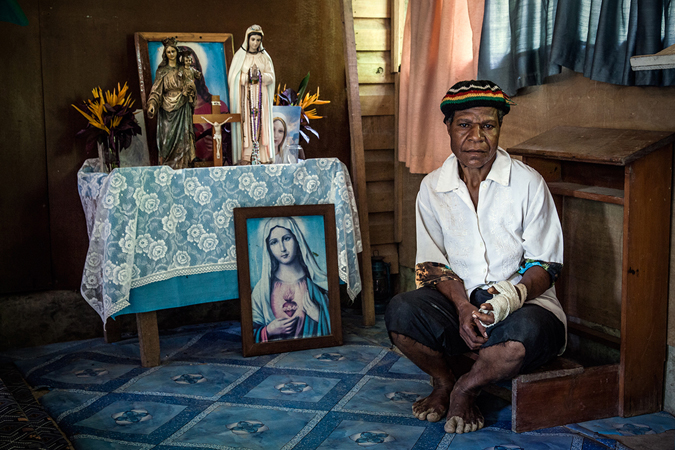 Mary Elaes (48), a wife of a Raskol gang member, called Blackie. Her husband hangs out with the gang almost all the time, coming home from time to time for food only. When there is no food in the house, he beats Mary, causing limb fractures and other injuries. Because of his criminal activities the police repeatedly look for Blackie in his house and, quite often, having failed to find him at home, arrests his wife. Mary was taken to prison many times, often with her children. To escape from her husband and police brutality, Mary often finds shelter in the local Catholic Church. Port Moresby, Eight Mile, Settlement. 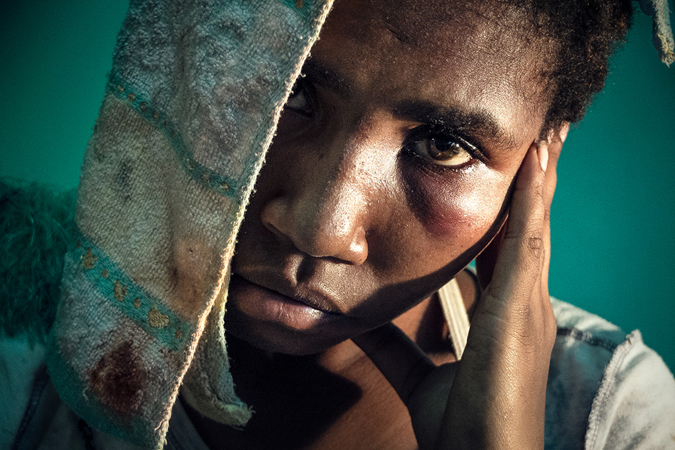 Banil Yalomba (16) came to the Antenatal Clinic of Port Moresby after having been sexually assaulted by her ex-boyfriend. A day after they separated, her former partner came to her parents’ house and dragged Banil to a bush area, threatening her with a knife. There he beat her and raped her. Banil’s father managed to find his daughter laying unconscious on the ground and brought her to the hospital.A Prison cell of the Boroko police station is mostly filled with murderers and rapists. The police officers on duty admit that it is very rare case that men are imprisoned on accusation for domestic violence. 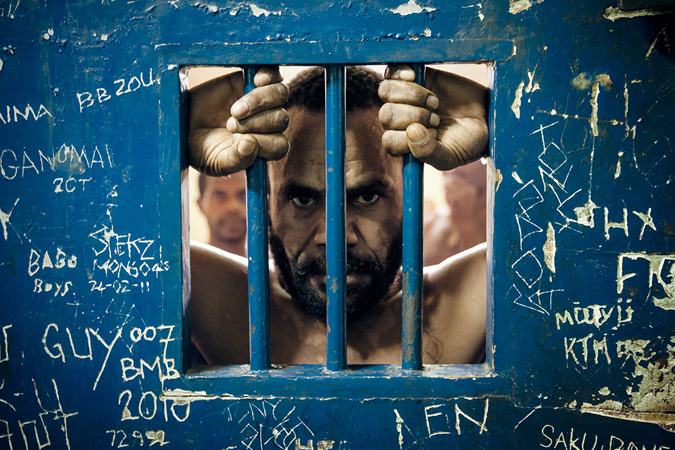 Andres Sime (39), is waiting for trial in a prison cell, having been accused of multiple rapes. The Boroko police station, Port Moresby. 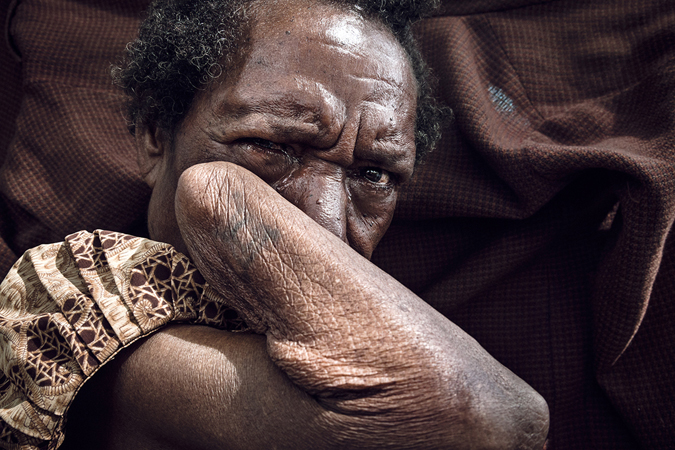 Rasta was accused of sorcery by the people in her village after the death of a young man.  She was set upon by the crowd at his funeral and beaten and strangled before she escaped.  she lost her hand in the attack. 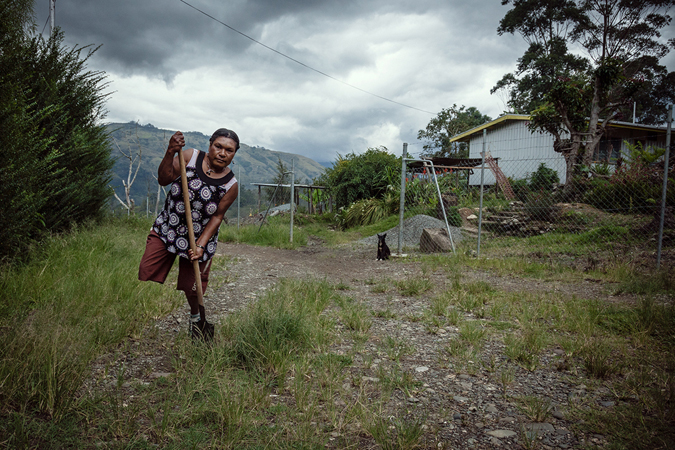 Helen lost her leg during a fight withe drunk husband: Alai.  Alai chopped of Helen's right leg with a bush knife in front of hteir children, who called for help.  Alai was arrested by the police, however, after receiving treatment Helen left her home out of fear that her husband might be released.  She returned when discovered that Alai had died in prison. 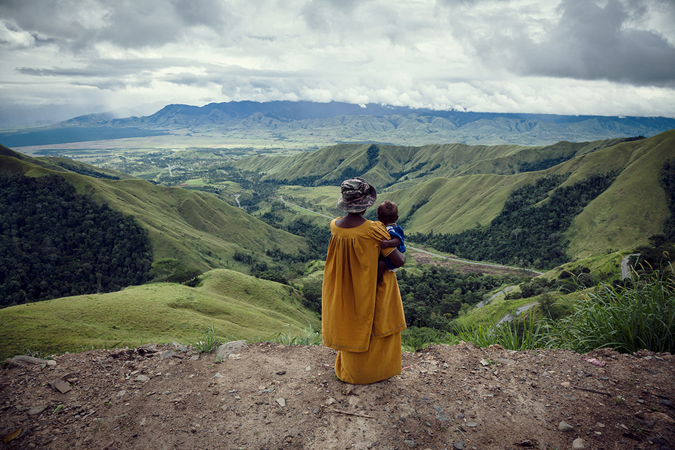 A woman looks down the valley from Kassam Pass, Morobe Province.  The beautiful landscape of Papua New Guinea's highlands belies the brutal reality of life in the  region, where more than 90% or women report suffering gender-based violence.