Australian photographer Patrick Brown  has lived and worked since made Thailand his base for nearly 20 years, devoting himself to documenting critical issues across the Asia region often ignored by the mainstream media. One of his major project on the illegal trade in endangered animals won a World Press Photo Award in 2004 and a multimedia award from POYi in 2008. Continuing to work on the subject, his book ‘Trading to Extinction’ was nominated in the 10 best photo documentary books of 2014 by AmericanPhoto.Patrick is the recipient of the 2019 FotoEvidence Book Award and World Press Photo Award 2018, 3P Photographer Award, Days Japan Award, Picture Of The Year Award, and NPPA’s Best of Photojournalism Award for his work. His work has been exhibited at the International Centre of Photography in New York, the Metropolitan Museum of Photography in Tokyo, and Visa pour l’Image in France.Patrick has been represented by Panos Pictures since 2003.You photographed theatre before becoming a photographer. What triggered this transformation?The move from photographing theatre – in particular dance -  to document social issues was in many ways a process of professional development for me. Capturing moments on stage require you to carefully anticipate where the dancer will go next and to allow for a degree of artistic interpretation. Movements and expressions on stage exist within their own universe and you need to be able to capture this in such a way that it still carries its message within, even when it’s no longer in the context of the theatre. In a similar manner, documenting social issues requires you to watch, wait and seek to capture that moment that extends beyond itself, and at the same time, it also requires you to open yourself up to a degree of artistic expression in an attempt to not only capture the action, but also to convey the atmosphere, the mood or, in the case of the Rohingya, the hopelessness and the sadness. 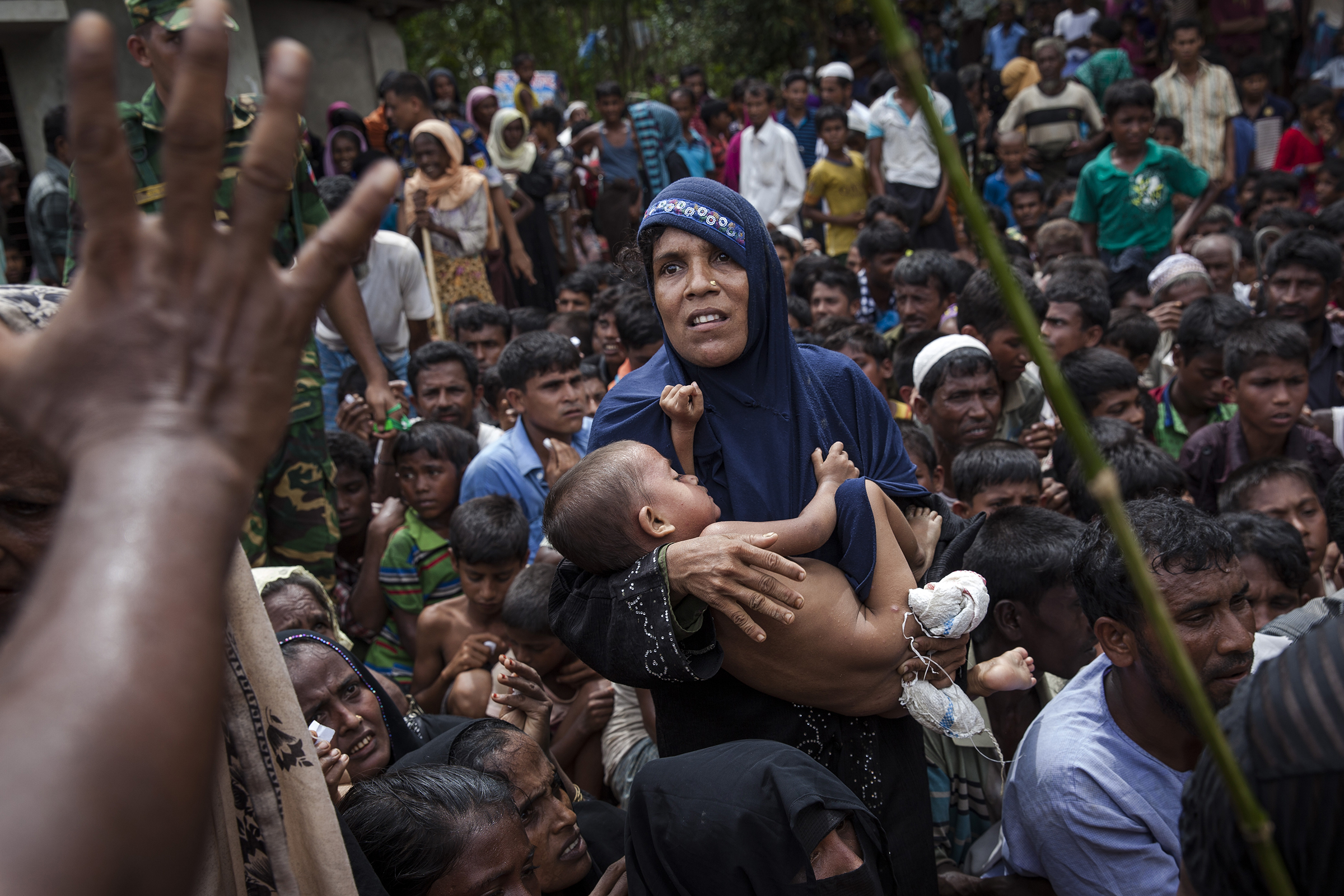 A woman carrying a baby tries to move through a crowd of Rohingya refugees as they wait at the Balukhali camp for the distribution of aid.Patrick Brown © 2019 Panos/UNICEFHow has this change affected your life?The theatre gave me some very important tools and visual insights that I continue to apply in my present documentary work. In many ways, the biggest change was when I decided to pursue a career as a photographer since it was also a commitment to pursue my two passions: the visual narrative and giving a voice to some of the injustice in the world….That said, being a photographer, and in particular a freelance photographer, is not a rosy affair. The value of the visual narrative has in some ways suffered from the visual oversaturation we experience via social media, and the importance of the narrative of the photo is often neglected. Even within our own industry, photographers are often merely considered as advocates and often expected to work for free or simply donate our work – for the sake of the cause and in the interest of simply having our own work promoted. But photography is not simply my passion, or my hobby, it is how I make a living. I think one is allowed to be passionate about ones’ work AND expect to be paid for ones’ time, and according to qualifications. Do you have moments of regret for the path you chose?No. Life is less predictable working as photographer and I will never become rich doing what I do, but lending a voice to the ones that are not allowed one, and to do this using my visual skills, is what I am meant to do. If only one thing I regret, that is that I didn’t get around to hire an assistant to help me with all the practicalities that take up almost 75% of a photographer’s time! Your work about the Rohingya Genocide won the 2019 FotoEvidence Book Award with World Press Photo and it will be published in a book. In your statement you mentioned, that nothing from your past experience, prepared you for what you witnessed there. What did you see?I meet people that had gone through something worse than hell, and survived but who will never be free from the horrors they have experienced. I never witness any of these horrific crimes myself, but the stories I listened to were beyond comprehension in their cruelty and unbelievable sorrow and pain inflicted. Mostly it was the pure scale of the crisis and the amount of people fleeing that took me by surprise and which I wasn’t prepared for. On top of this came the stories I was about to hear, such as the Tula Toli massacre, which involved some of the most horrific stories I’ve ever heard in my life. 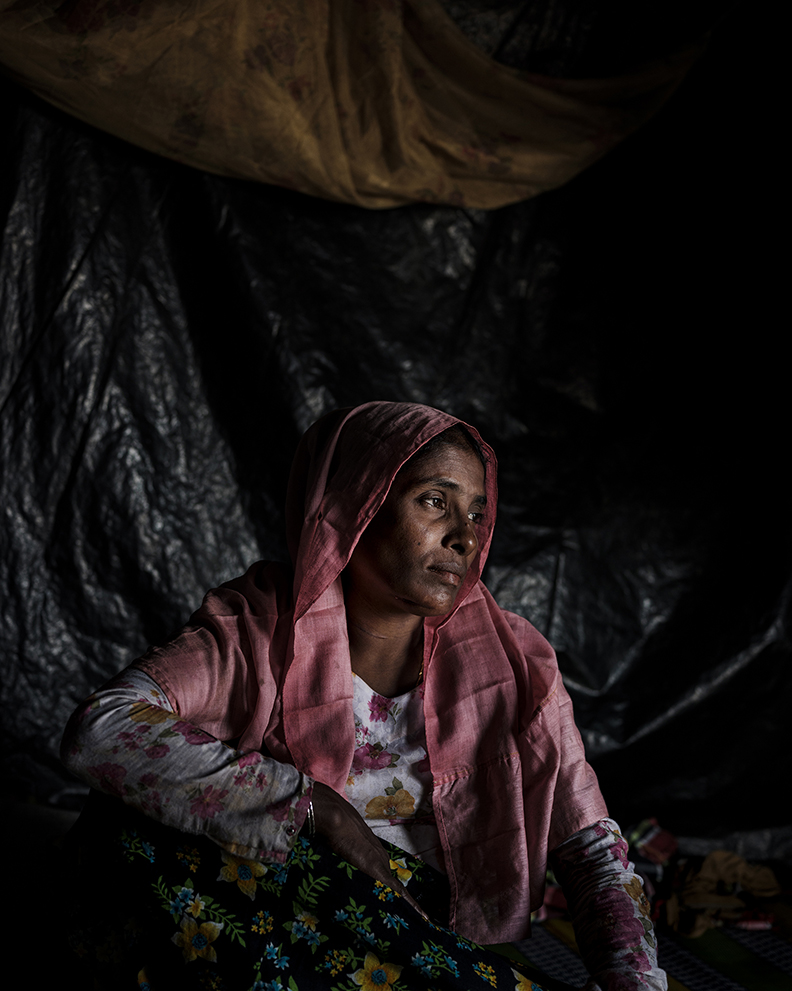 Almas Khatun, 40, survived the massacre at her Tula Toli village in Myanmar. She says a soldier held her arms behind her back and forced her to watch as other soldiers killed her seven children, her husband and two brothers. She came alone to Bangladesh.14 December 2017 Patrick Brown © 2019 Panos/UNICEFYou saw and photographed the worst of what humans can do to another human or an animal. Do you still have faith in humanity?I think it is important to remember that in the case of the Rohingyas, it is not about one mans evil and random actions, but about systemic eradication of a people that has been happening for many many years. The discrimination against the Rohingyas has been institutionalised at a level and to a degree that has legitimised an intimate hatred against an entire population, for the only reason of their ethnic descent. I still have faith in humanity, yes, but I also have learned that humans are able of despicable horrific actions against each other. I knew this before, but never fully understood what this meant until I met the survivors of the Tula Toli massacre. There is a section in the book with testimonials from survivors and another with images of the tools that have been used to torture and kill Rohingyas. In fact, your work and the book provide evidence of a massacre at scale which has been termed genocide by recent report by the UN. Do you expect your work to influence policy makers?I would hope it would. As such his is not just a photographic book, but an attempt to contribute to the awareness and recognition of the mass atrocities committed against the Rohingya people. The emphasis on the personal narratives, their lives in the refugee camps and the interviews of the some of the survivors of the Tula Toli massacre, hopefully will contribute to a deeper understanding of the urgency of political intervention and immediate aid needed. If this book in any way can contribute to some of the ongoing work towards recognition and justice for the Rohingyas, that’s all I can hope for. Are you a voice or photographer?I am a photographer and to a certain extent, sometimes, I am given the opportunity to also have a voice, or to lend a voice to the ones who don’t have one. This doesn’t make me an activist. As a professional documentary photographer, all issues and all causes are of interest, and I cannot only dedicate myself and my voice to once issue. That said, the current situation of the Rohingya and the unimaginable horrors they have been through, have become a personal dedicate of such – for the sheer injustice and extreme need of attention towards these people who have been persecuted their whole life and now, the ones I meet, have lost everything they ever had.