Maxim Dondyuk - Tuberculosis Epidemic in UkraineIn December 2010, I went to the Donbass region in Ukraine. I was greatly influenced by what I saw on the first day. One of the first patients I photographed was suffering from gastrointestinal tuberculosis. He was lying naked on a hospital bed and staring at the ceiling. A week later I was with him in the last hours of his life. He could not move or talk, his body was like a skeleton covered with skin. He clutched a cross to his chest and prayed. Afterwards I met his wife and she told me how he had walked around the house with a torn stomach and intestines dragging across the floor, because the ambulance had refused to transfer him to the hospital. They had to call for a taxi.After a while, I realized that this was happening all over the country, that the tuberculosis epidemic had become a national problem. Many prisons release convicts with serious health conditions so as not to spoil their mortality figures. Two-thirds of former prisoners are released into the country without being kept under medical supervision. Hospitals are in a terrible state and rely on doctors who are long overdue to retire. Patients with drug-resistant TB have to use public transport to get their medicine and food. Those without money just die in their beds. In the midst of the current political conflict in Ukraine everybody is just indifferent to the problem of tuberculosis and its victims. 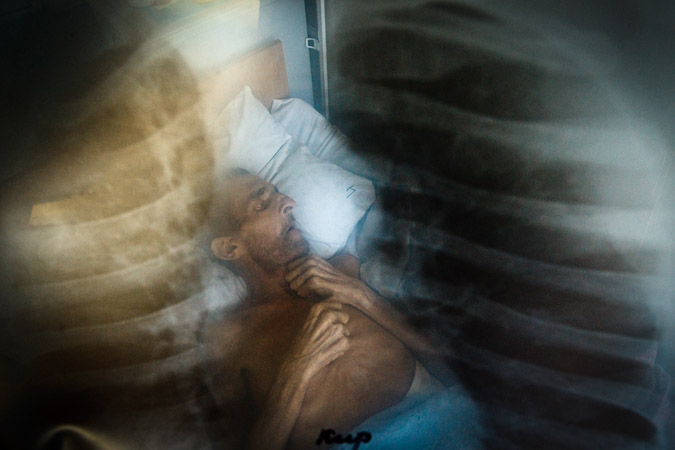 Gennady, 49 years old. Diagnosis: multidrug-resistant TB and HIV. Donetsk TB dispensary, December 23rd, 2010.From the words of his wife:He worked at the mine. In 2007 pulmonary tuberculosis was discovered. The treatment was prescribed, felt himself better. He didn’t finish the treatment and started to drink alcohol. In 2010, the acute abdominal pain appeared. The numerous ulcers have formed in the bowels, a diagnosis - intestinal tuberculosis. Doctors have demanded to transport the patient to a TB hospital or home immediately. He was transported by taxi. After another operation all the sutures on his stomach diverged because of multiple ulcers. The doctors told that he could probably live just a couple of days, the family decided to take the dying man home. He was walking around the apartment and brawling during the whole month with an open wound on his stomach. The wife had to beg doctors to take him to the hospital.Died December 23, 2010, this photo has been made two hours before his death. 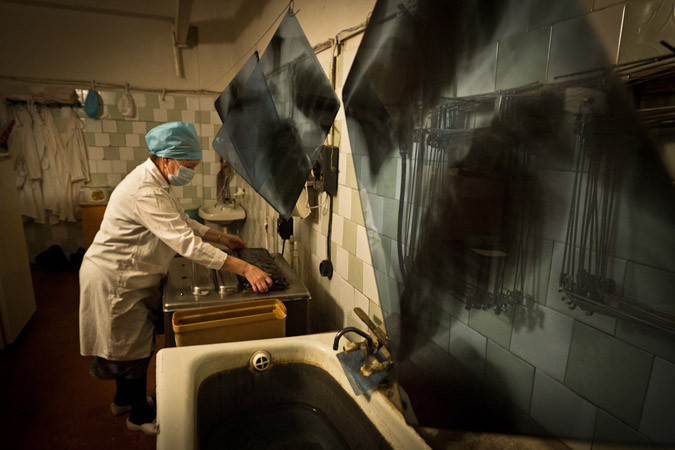 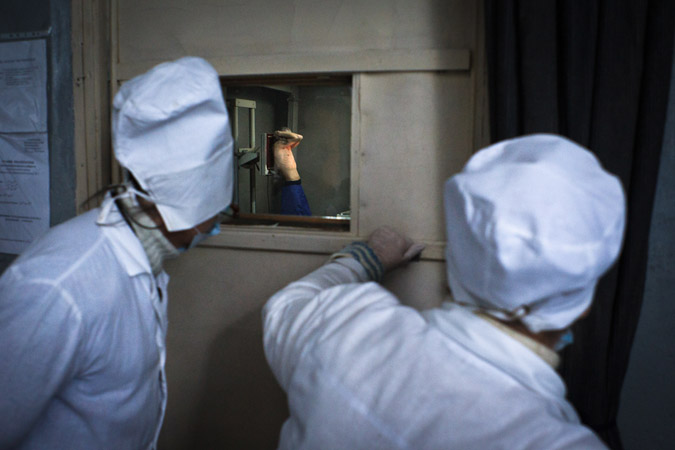 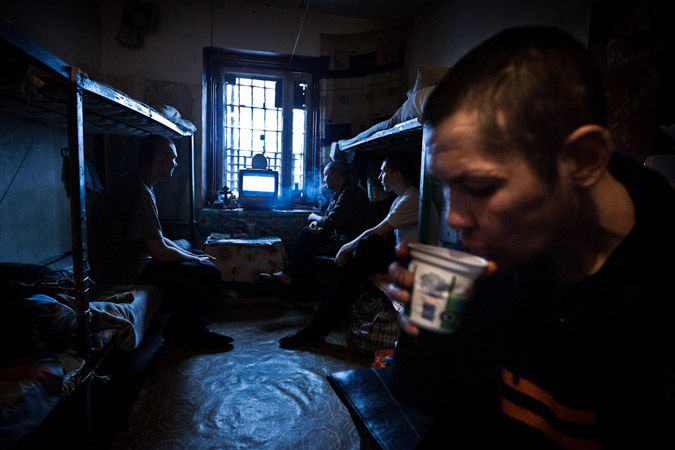 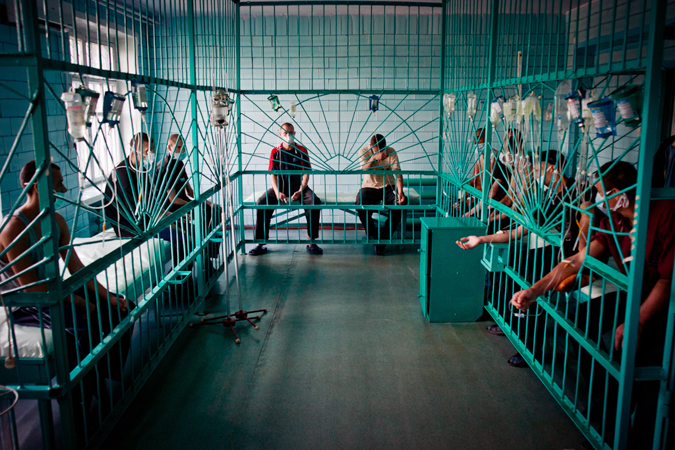 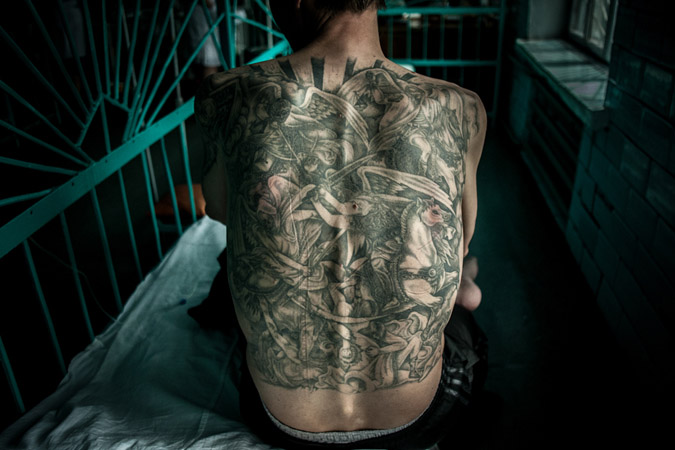 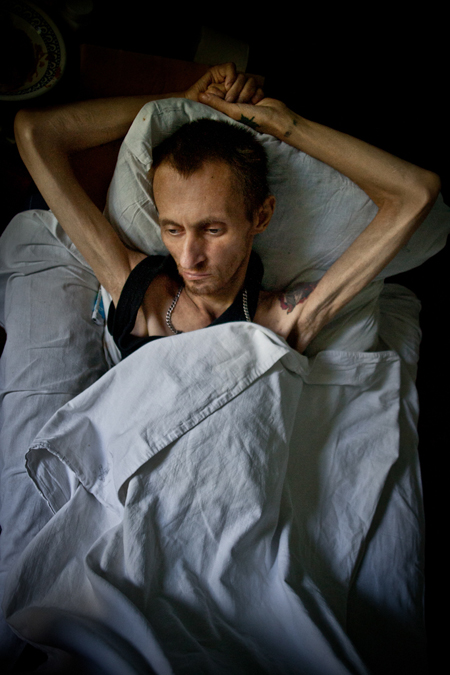 Konstantin, nickname "Salman", 42 years old. Diagnosis: multidrug-resistant tuberculosis with HIV. Kherson TB Dispensary, August 04th, 2011.As a child he was beaten by his stepfather, tried to shoot himself, but the bullet had passed through,leaving a blind right eye. After resuscitation, he began to use drugs. He has been using drugs for more than 25 years. The dose reached to 5 cubes of opium and 2 cubes of amphetamine. He delivered the poppy from Western Ukraine. He was serving his sentence only. In the prison he stopped to use drugs. In the second year of being there the polio appeared. X-rays were taken and the diagnosis was tuberculosis. In tuberculosis colony ones began to make TB drugs injections, he has an opinion that because of the incompatibility of HIV and TB drugs his feet began to refuse. He was treated for four month. His mother was coming every evening, bringing food and medicine.He died August 24, 2011. 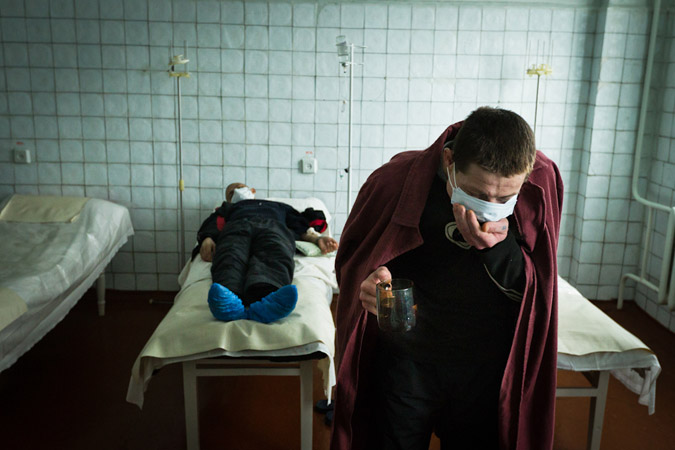 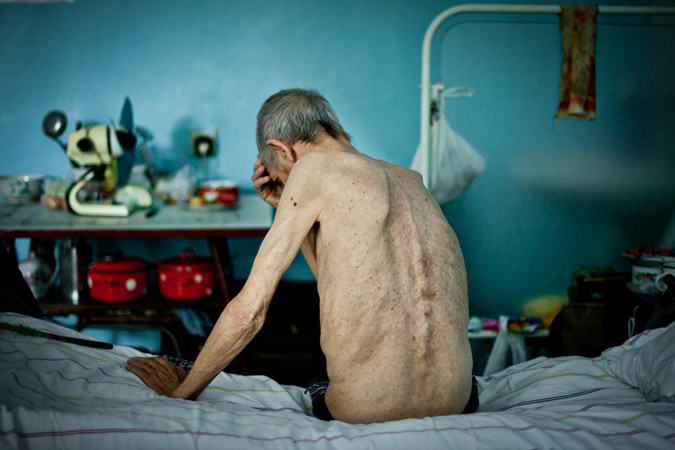 Michael, 63 years old. Diagnosis: multidrug-resistant tuberculosis. Kherson TB hospital, July 19th, 2011.From the words of the patient:worked as a bricklayer on a construction site. After surgery on the stomach, he went for the check to a doctor, who found spots in the lungs,after this he was sent immediately to the clinic. He has been treating with the intervals of 2-3 years since 1983. The reaction of his organism becomes acute every autumn, so he always stays in hospital for the prevention. Earlier, in USSR times the food was very good, but nowadays he buys food by himself. 4 years ago his wife died, and then he had a stroke. He started to walk using the stick and had problems with speech. Son buys all the medications and products. 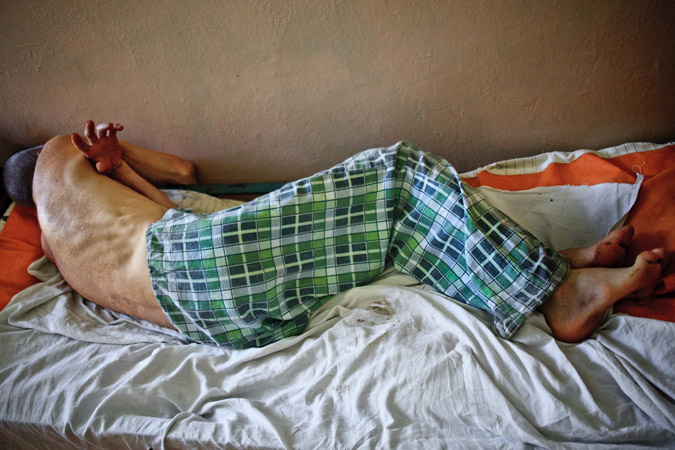 Alexander, 54 years old, mentally sick. Diagnosis: tuberculosis. Novotroitsk TB dispensary, July 25, 2011. The medical staff story: He was severely beaten, lost memories. We could not find his relatives. He is anxious and aggressive. When TB treatment is over, he would be send to an asylum. The patientÕs story:My name is Bukarev Alexander Michailovitch. I was born in 1957 and now I am living in Cherson. I am married and have two children. 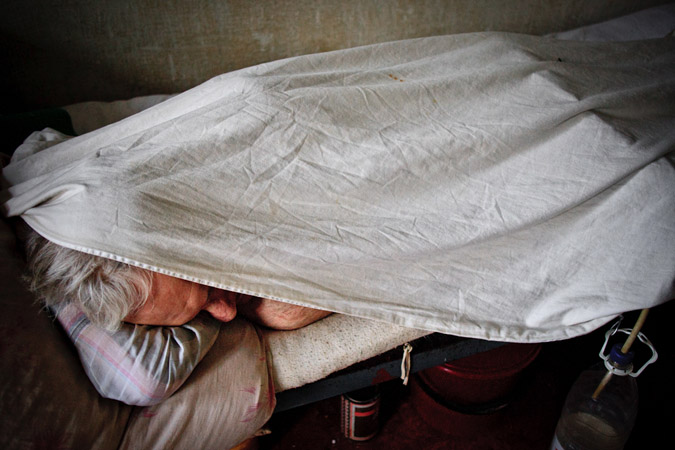 Nikolay, 66 years old. Diagnosis: tuberculosis. Novozburevsky TB Dispensary, August 16th, 2011.From the words of the patient:used to work as a combiner in Kazakhstan. He has no relatives and children. He used to live in a nursing home, during the medical examination was diagnosed with tuberculosis. Transferred to the dispensary. He broke his leg and could not get up. All the belongings and documents have disappeared from the ward. He is not able to receive a pension. He is treated for a second time. He considers a nursing house as a concentration camp, afraids to go back. 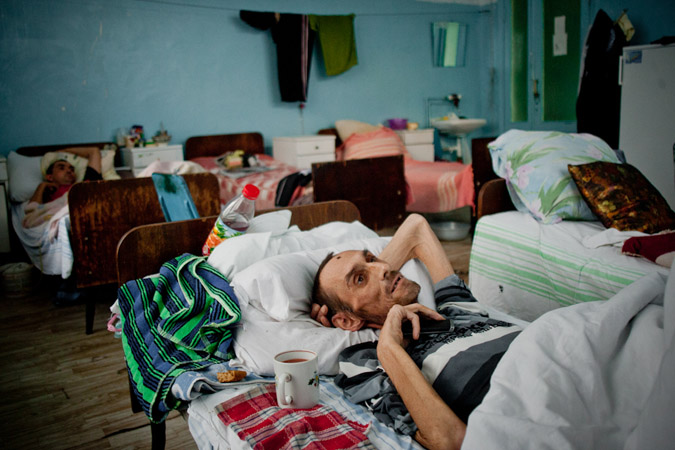 I met Gena in their courtyard, sitting on a bench. He told me that he had TB for six years, no idea how he got it. He worked on a fishing boat on Kamchatka, after receiving a letter from his mother telling that she`s dying he returned home, couldn`t find a job and started drinking.   At the time he was fishing to earn his bread. A week later we met in the hospital. All week he was drinking vodka heavily until the ambulance took. As time passed, the disease progressed and Gena started using a walking stick. In the hospital I met his mother, it turned out she was alive and well, but she had to sell her belongings and gather bottles for recycling to be able to pay for her son’s treatment and food. Gennady, 42 years old. Diagnosis: multidrug-resistant TB and HIV positive. Died October 12th, 2011. 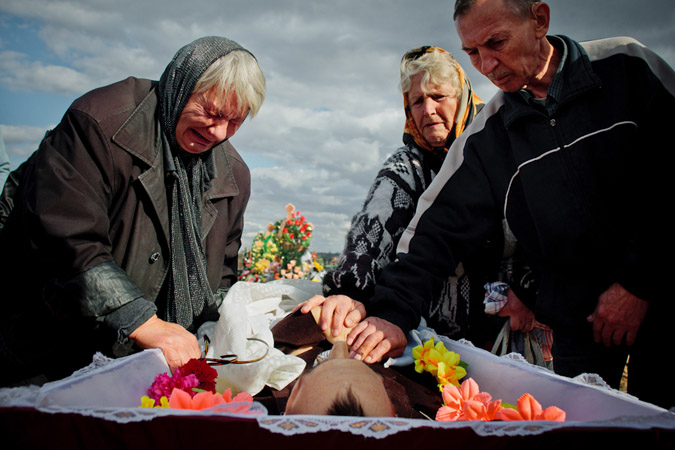 Mother and the close friends of Gena at his funeral. October 14th, 2011 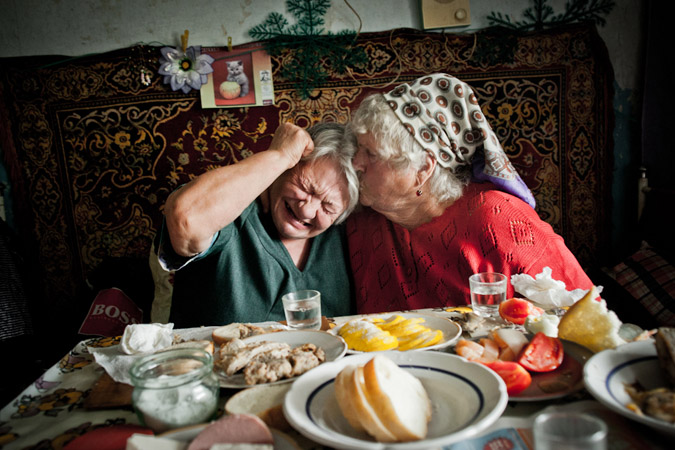