The Battle of Mosul to retake the city from the Islamic State (ISIL) is a joint offensive by Iraqi government forces with allied militias, and international forces. The offensive, dubbed Operation "We Are Coming, Nineveh," began on October 16, 2016 with forces besieging ISIL controlled areas in the Governorate surrounding Mosul. The battle for Mosul is considered key in the fight against ISIL, which seized the city in June 2014. Outnumbering ISIL forces 10 to 1, Iraqi forces are experiencing their largest deployment since the 2003 war in Iraq. The offensive began with Iraqi troops and Kurdish fighters engaging ISIL on three fronts outside Mosul, going from village to village in the surrounding area. More than 120 towns and villages were liberated from ISIL control in the first two weeks of fighting. At dawn on November 1st, the Golden Division Iraqi forces entered the city on the eastern front.  The Iraqi advance into the city was met with fierce fighting and was slowed by elaborate defenses, including road blocks, booby traps, suicide bombers and snipers, and by the presence of civilians. More than 800.000 civilians were trapped in the city, caught between being held hostage by ISIL and used as human shields or besieged by the Iraqi army and the constant fierce battles.  Forced into an Exodus, many tried to escape but found themselves caught in the fighting, with many wounded and killed. Often, they were directly targeted by ISIL mortar fire behind the frontlines as they tried to get to safety. The areas already liberated are often destroyed and left burning by ISIL, who had two years to prepare for the offensive. 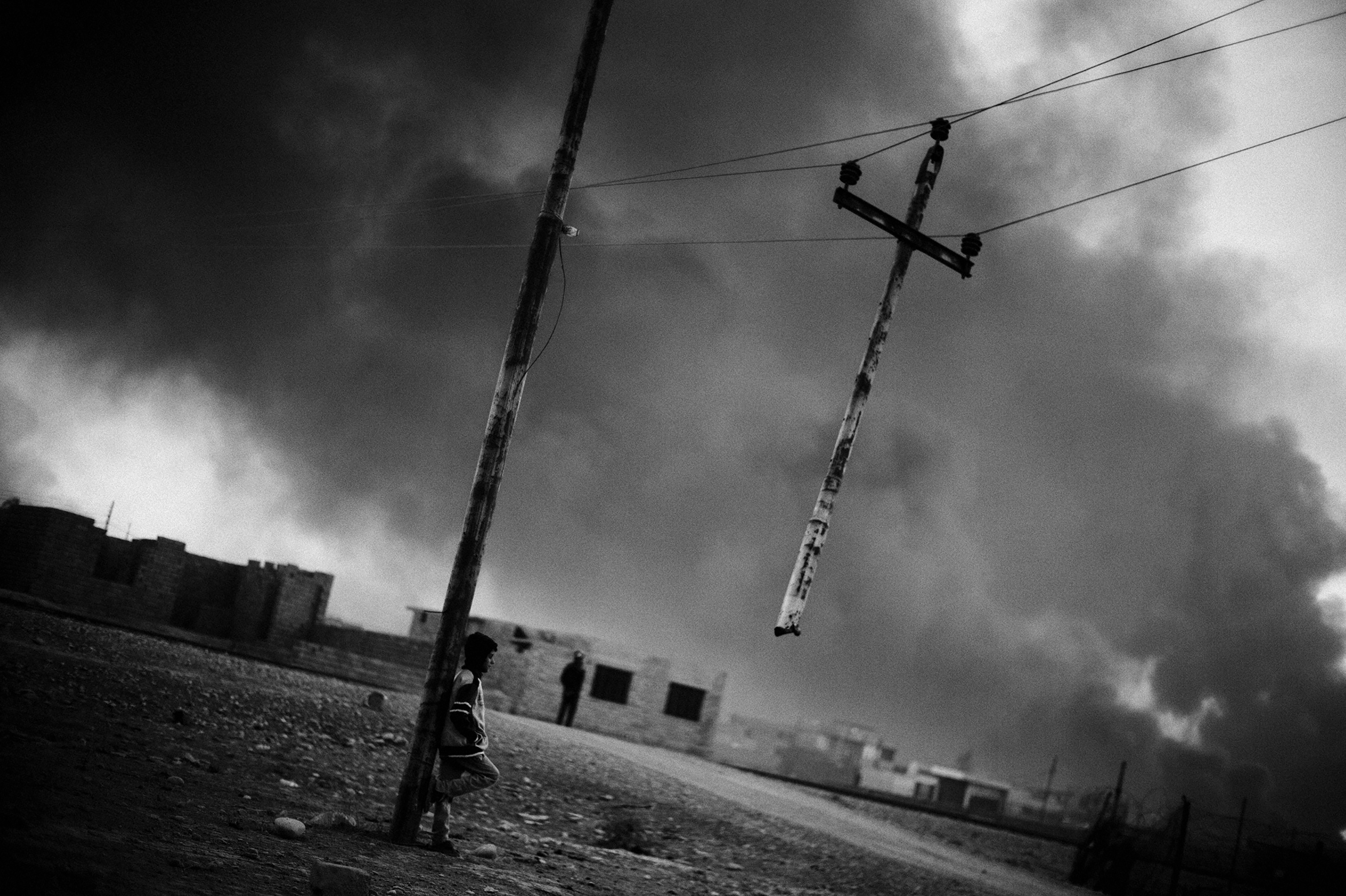 A boy watches as troops move down the main road leading toward Mosul, in the city Qayyara, south of Mosul.  The dense plumes of smoke are emanating from multiple sites about 30 miles (50 km) south of Mosul. The fires were deliberately set by ISIL militants before abandoning the city. The smoke has been persistent over the past three months, blotting out the sun hours before nightfall and creating major health issue, especially for the children in the area. 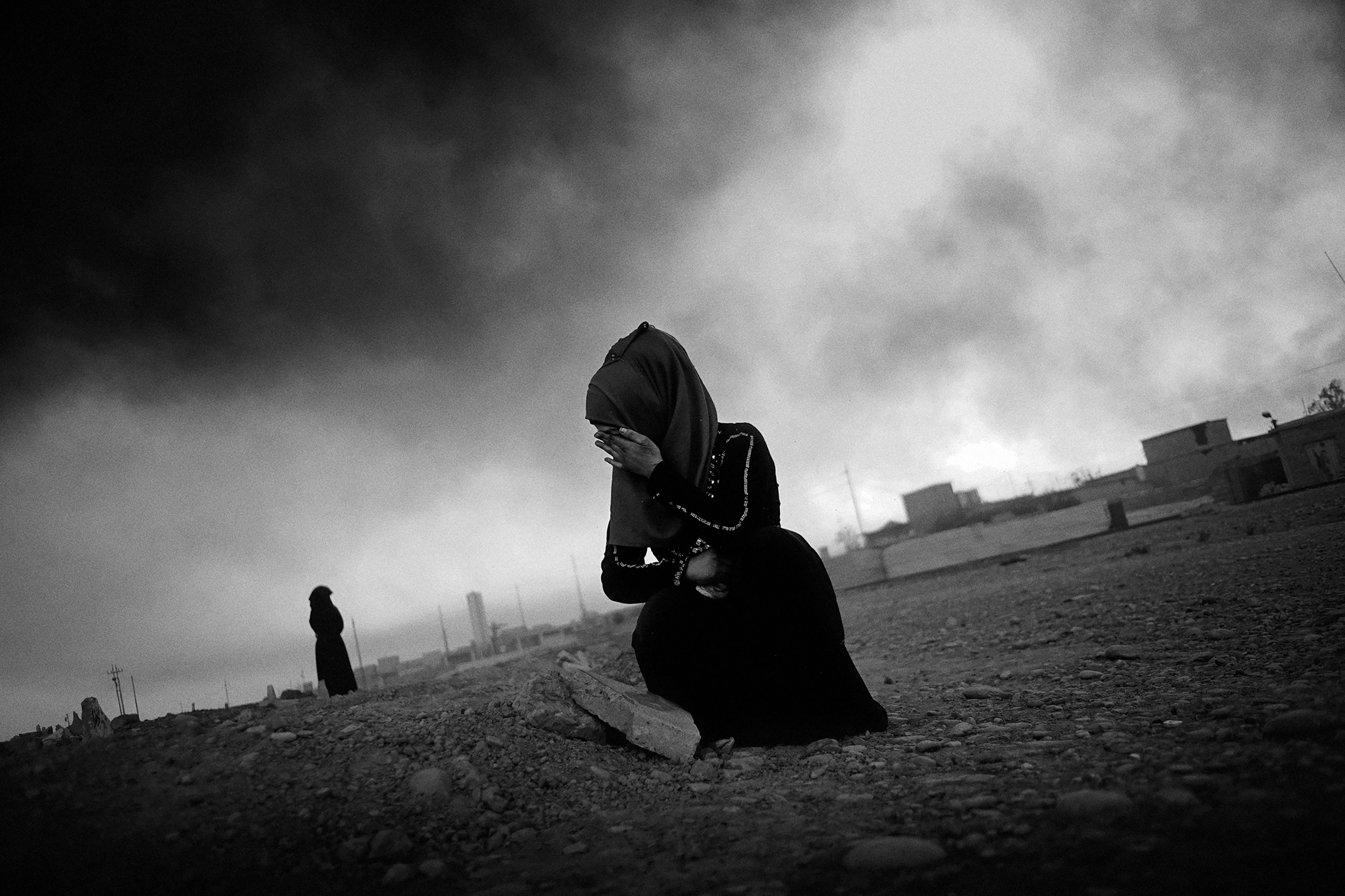 A young woman in grief, cries at her mother’s grave on the outskirts of the city Qayyara, south of Mosul.  Her mother was killed in an airstrike by coalition forces as they backed up Iraqi forces retaking the city from ISIL. Before leaving the city, ISIL destroyed all the tombstones in the graveyard. 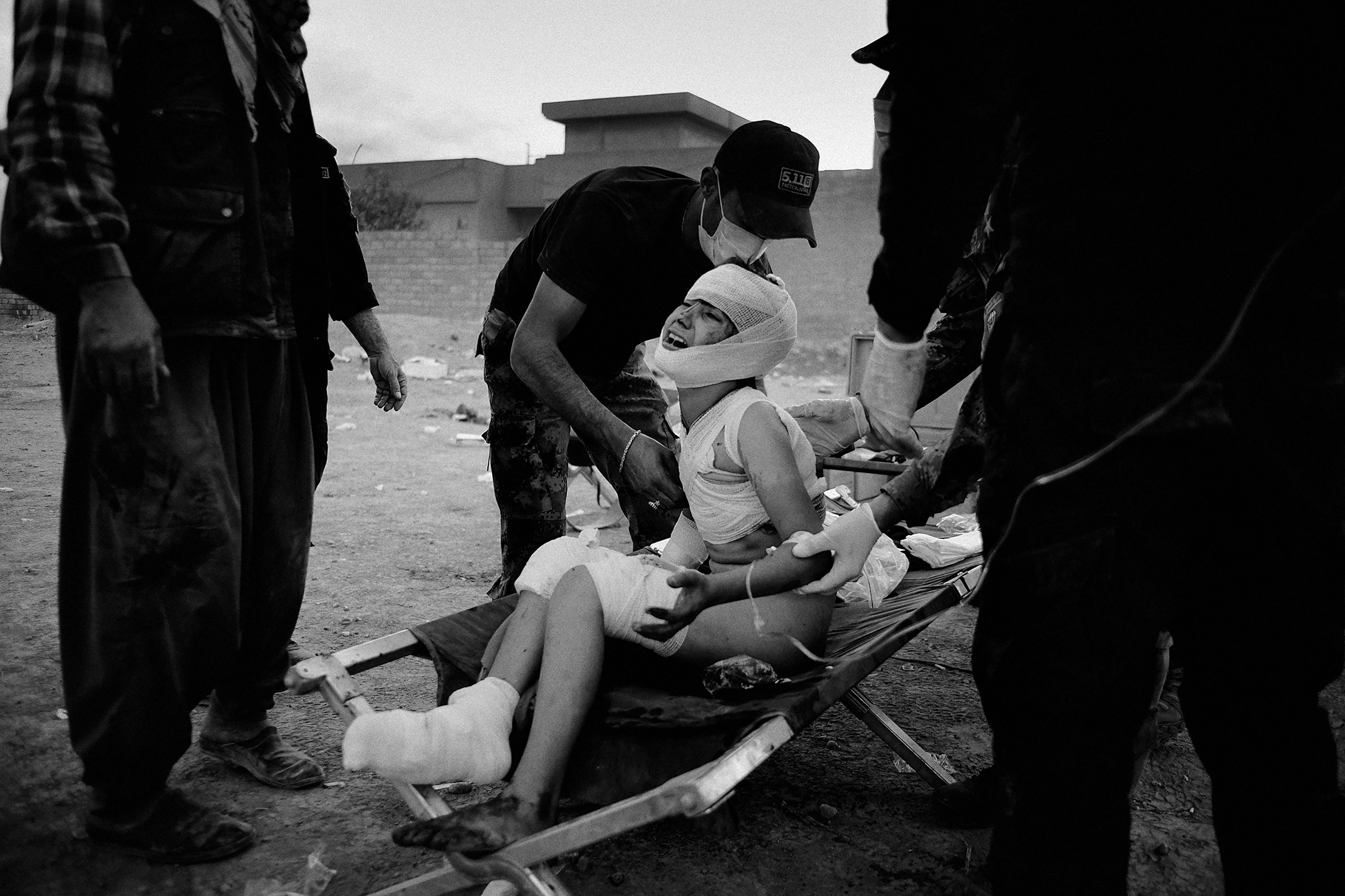 A young girl severely wounded by shrapnel from a mortar attack from ISIL aimed to hit refugees trying to leave Mosul and get to safety on the other side of the front lines. Daily, ISIL targets civilians who try to escape ISIL’s iron grip on the city, where they use civilians as human shields. 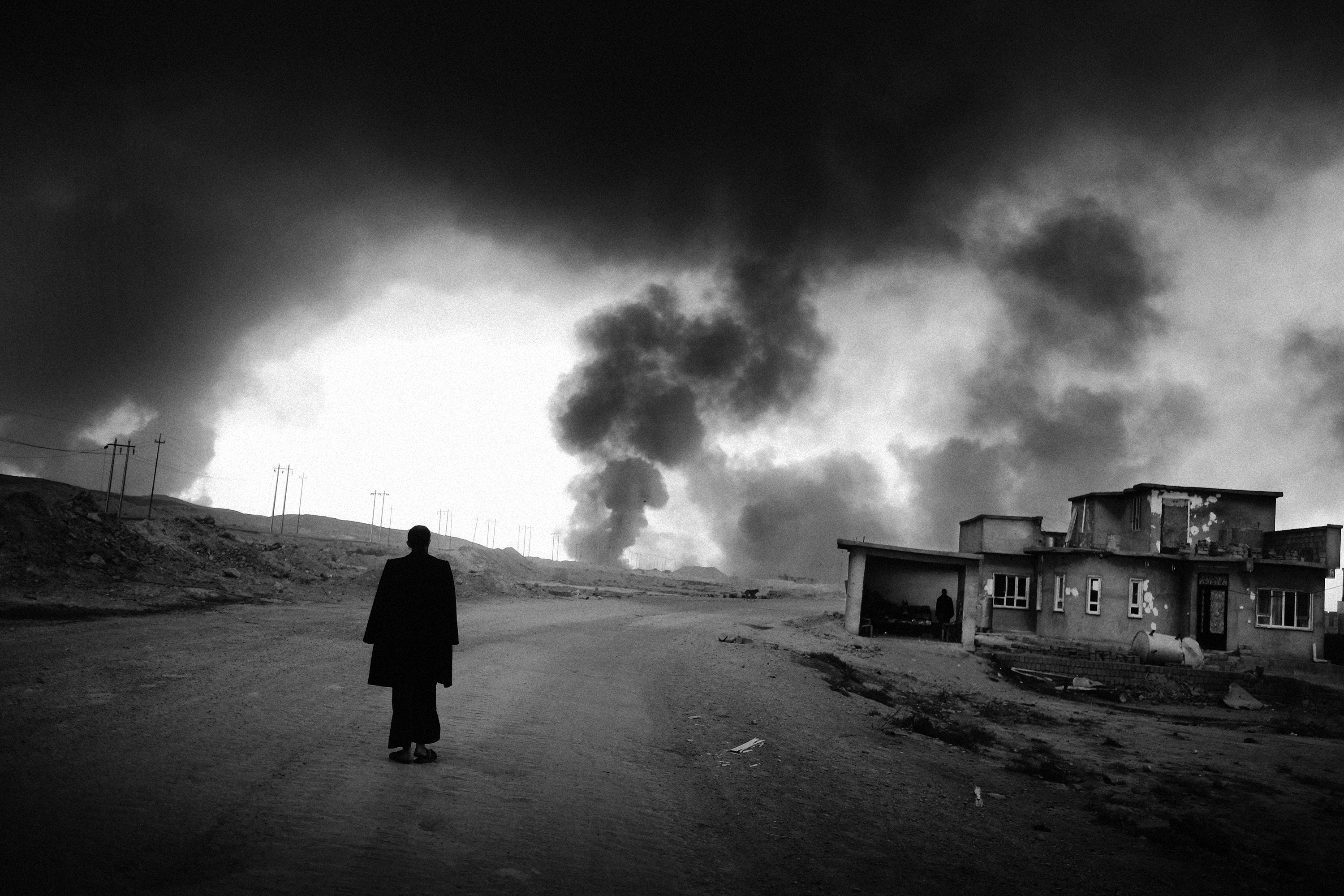 An old man walking down the main road leading toward Mosul,in the city Qayyara, south of Mosul. 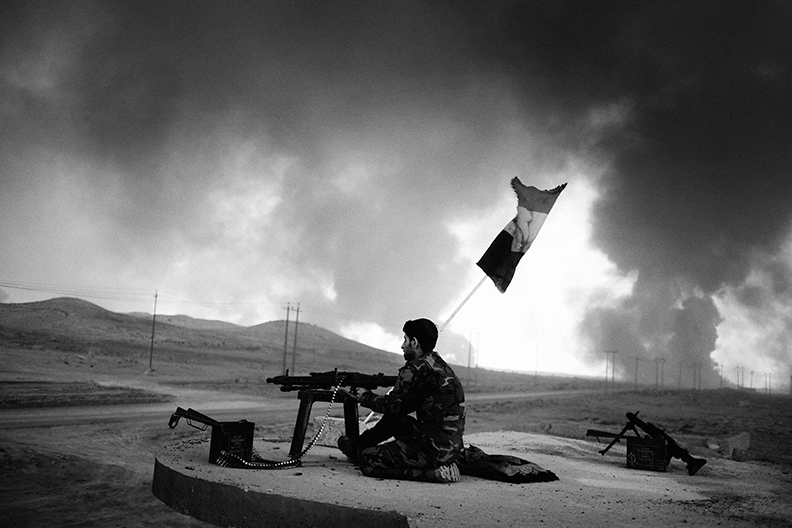 A soldier from the Iraqi forces prepares his heavy machine gun, at a checkpoint on the main road leading to Mosul from the southern part of the country. 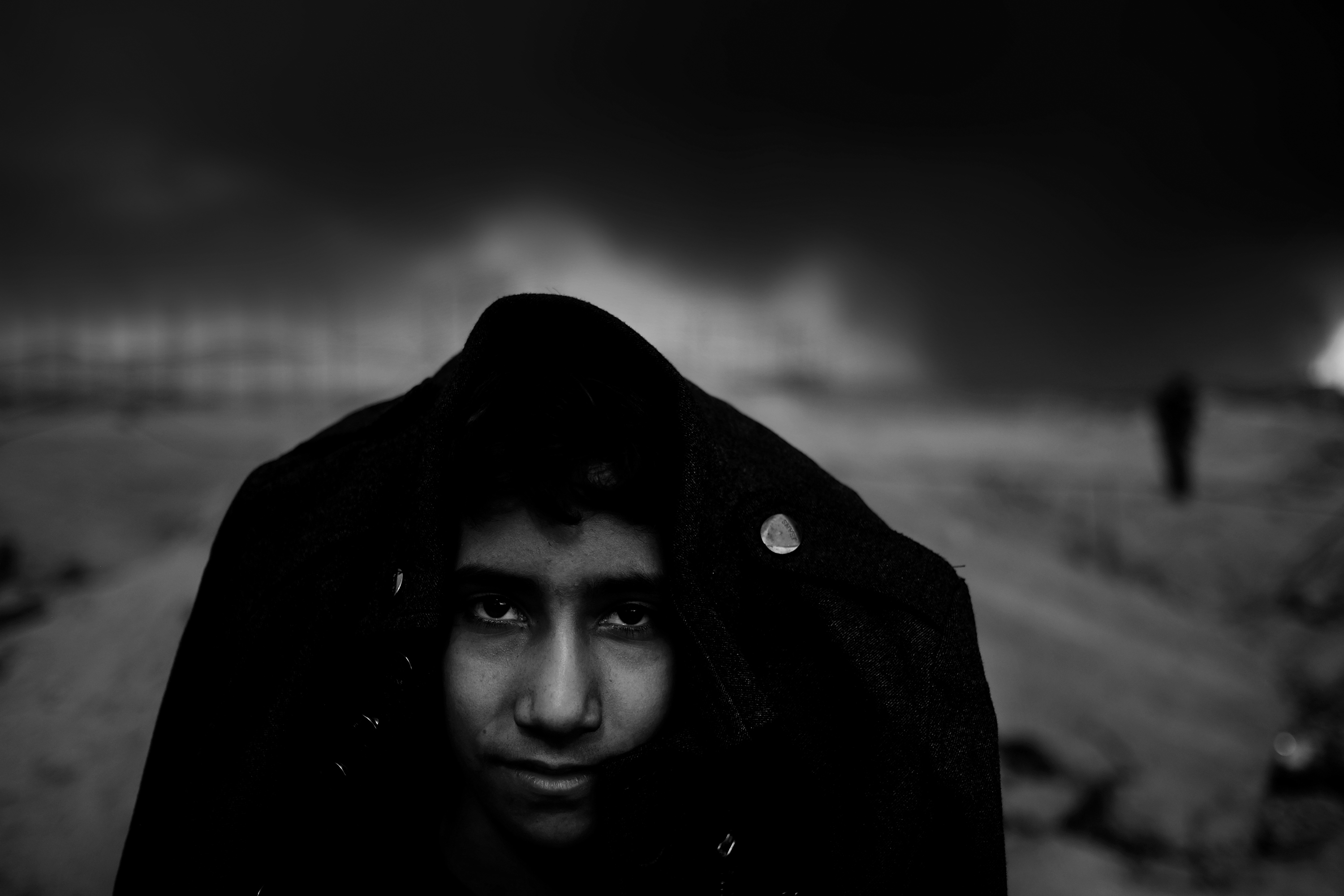 A boy covers his head with his jacket in the city Qayyara, south of Mosul. 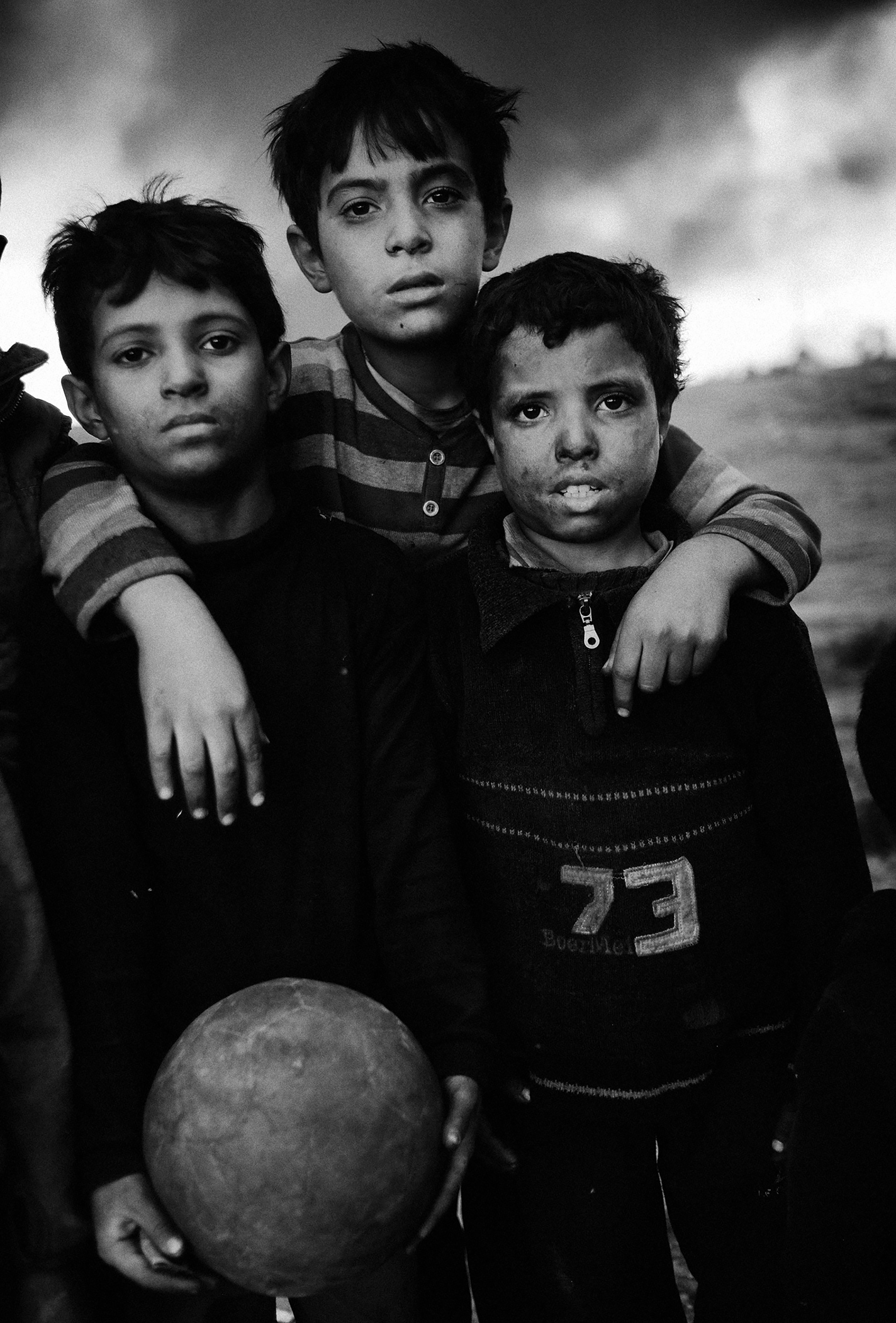 Three boys at the football pitch in the city Qayyara, south of Mosul. 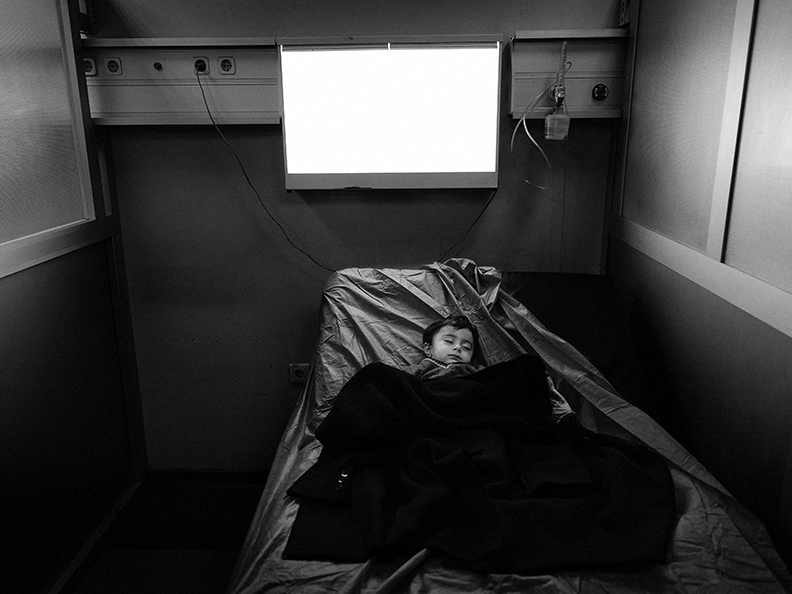 A little boy sleeping under his father's jacket, after he and his family have been taken to a hospital in Erbil on Christmas day. 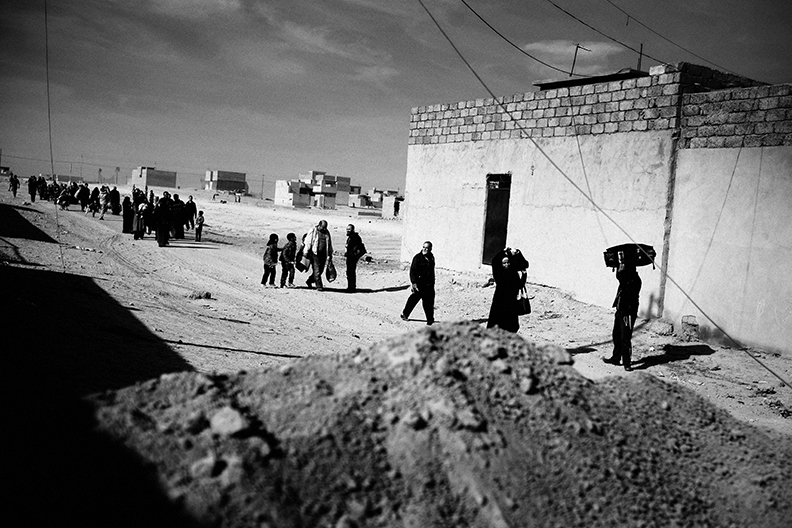 Refugees crossing the front lines in the outskirts of Mosul into the suburb Gogjali, from where they will be transported further into the northern part of Iraq. 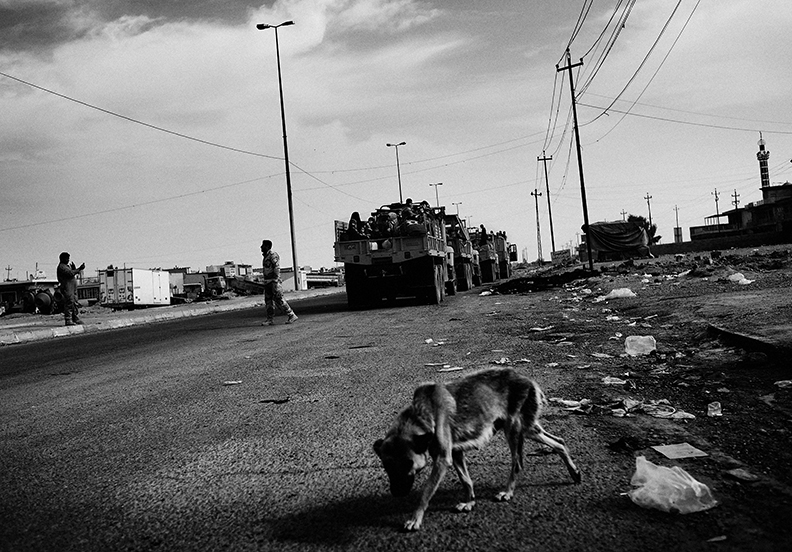 Trucks full of refugees waiting to be transported to safety, away from the Gogjali district in the outskirts of Mosul.