Tanya Habjouqa - Occupied PleasuresMore than four million Palestinians live in the West Bank, Gaza, and East Jerusalem, where the political situation regularly intrudes upon the most mundane of moments. Movement is circumscribed and the threat of violence often hangs overhead. This creates the strongest of desires for the smallest of pleasures, and a sharp sense of humor about the absurdities that a 47-year occupation has produced. This is an exploration of the moments where ordinary men and women demonstrate a desire to live, not just simply survive. Media coverage of the occupied Palestinian territory (oPt) is certainly not lacking; however, Palestinians are often misrepresented and suffer from a loss of a focus on the individual. Because they are typically viewed as proponents of violence or victims of violence, their simple human narrative is often denied. Within these “fringe pleasures” there are also quiet moments of release and escape. In humor there is often sadness, longing for more possibility. There is a momentum forming, as Palestinians “reimagine” their reality—using their environment, such as Israel’s separation wall in Qalqilya, to deftly fly away or watching the World Cup projected on it in Bethlehem. This project brings together these glimmers of hope, dignity and laughter; all of which –sometimes—override the emblematic stresses of an occupied reality. 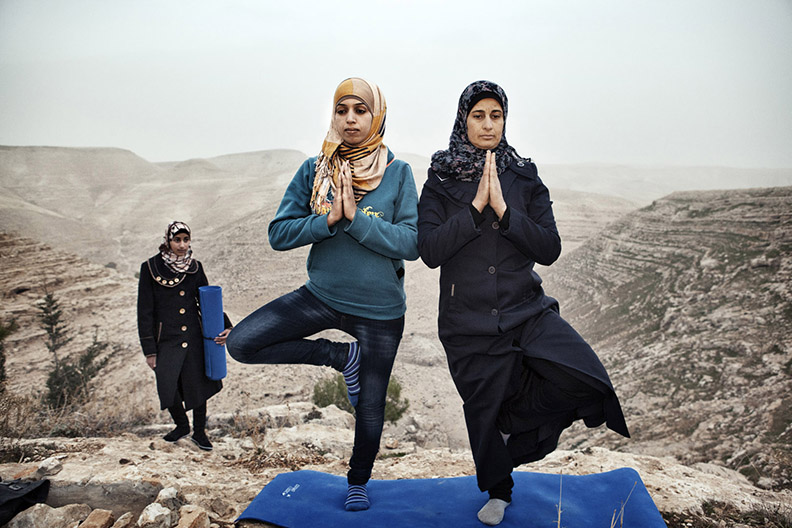 Hayat Abu R'maes, 25, and Nabila Albo, 39, take students out on a nature walk for yoga in Zatara, on the outskirts of Bethlehem. Sometimes they go to nature spots (one popular spot with Roman ruins) that settlers try to intimidate Palestinians from accessing. They call it "inner resistance". 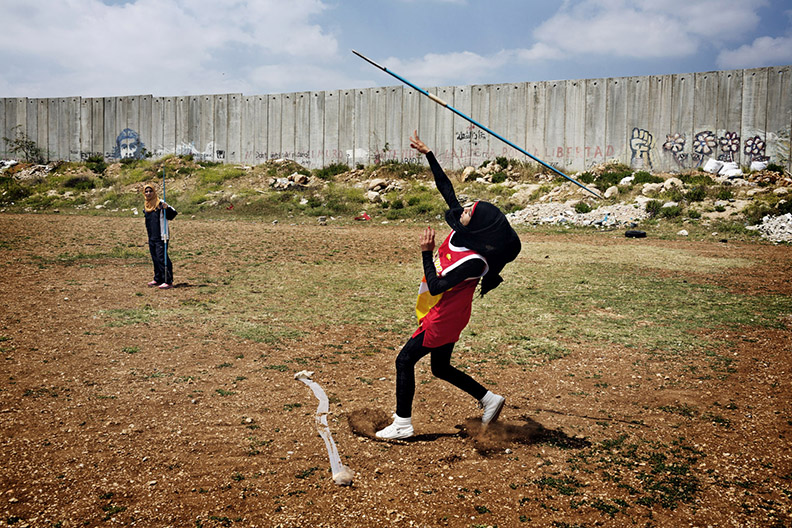 Students  from the Al-Quds University javelin team wrap up the last practice before summer vacation in the West Bank city of Abu Dis, next to the Israeli Separation Wall. 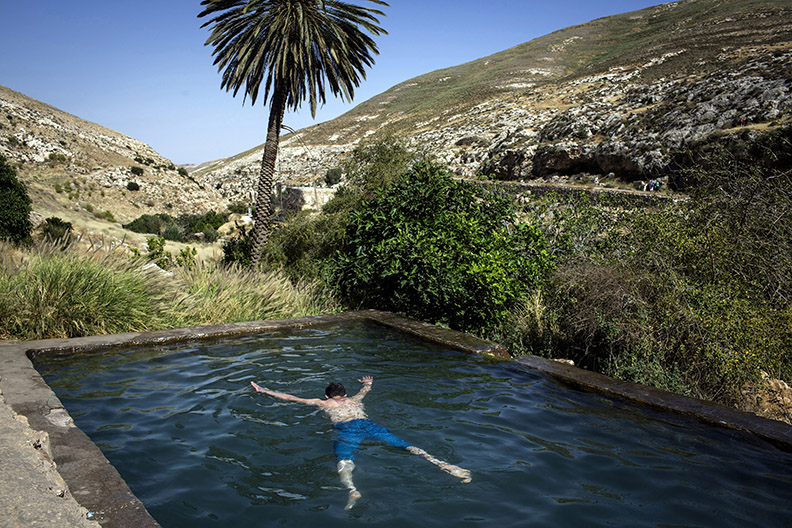 Ein Fara, West Bank:  A Palestinian youth from Hebron enjoys a swim in Ein Fara, considered to be one of the most beautiful nature spots in the entire West Bank. It, like many other nature reserves and heritage sites in the West Bank, is managed by the Israeli Nature and Parks Authority. 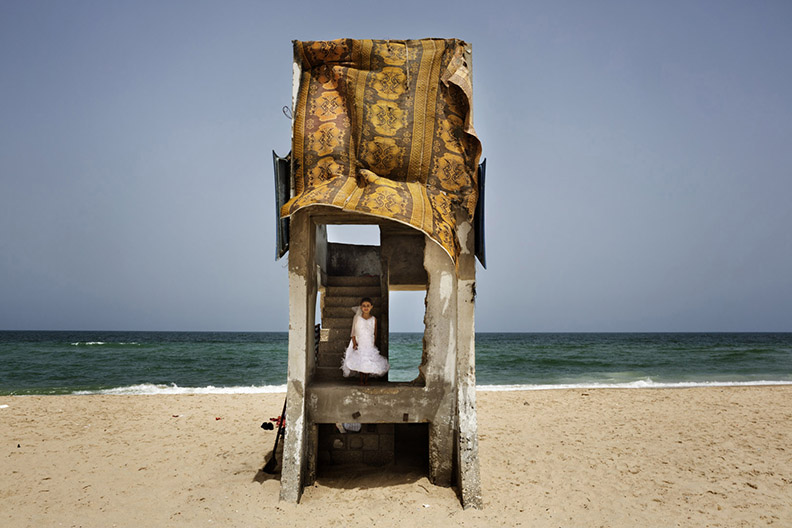 A young girl plays on the beach in the party dress she wore to a wedding the night before, at the Deir al-Balah Refugee Camp in Gaza. 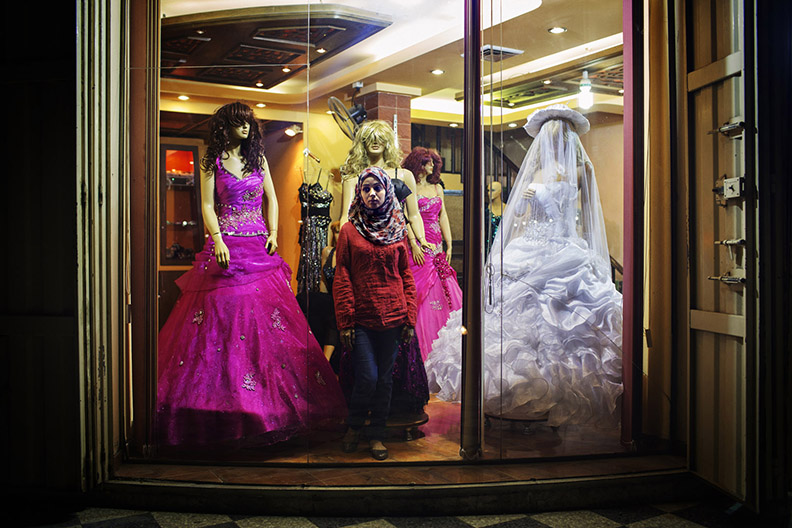 A young fiancée shops for a wedding dress in Gaza. Her future husband is working in Libya, where she hopes to join him. Since the Israeli siege, many Gazans say that girls are marrying younger as there are less possibilities for both work and travel. Most young girls say they hope to find a husband who is based outside or will find work that will take them away from the confines of Gaza. 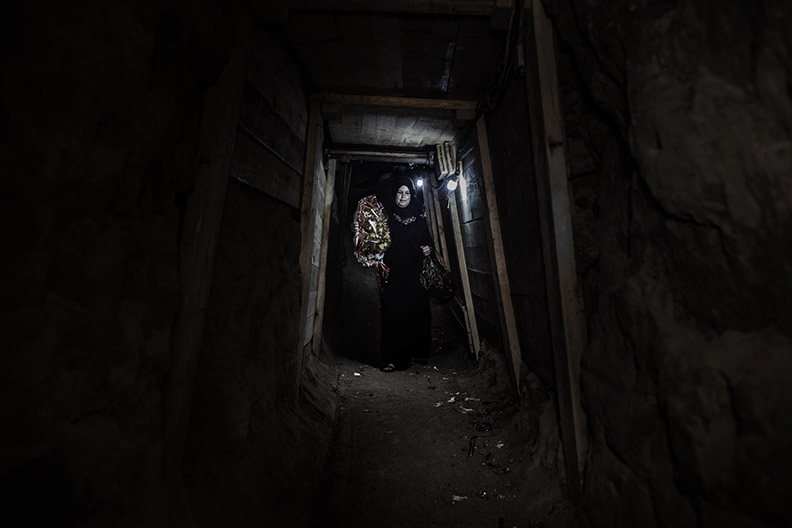 A woman in Gaza, without a travel permit, marches through the silent dark of an underground tunnel on her way to a party in Egypt, clutching a bouquet of flowers. 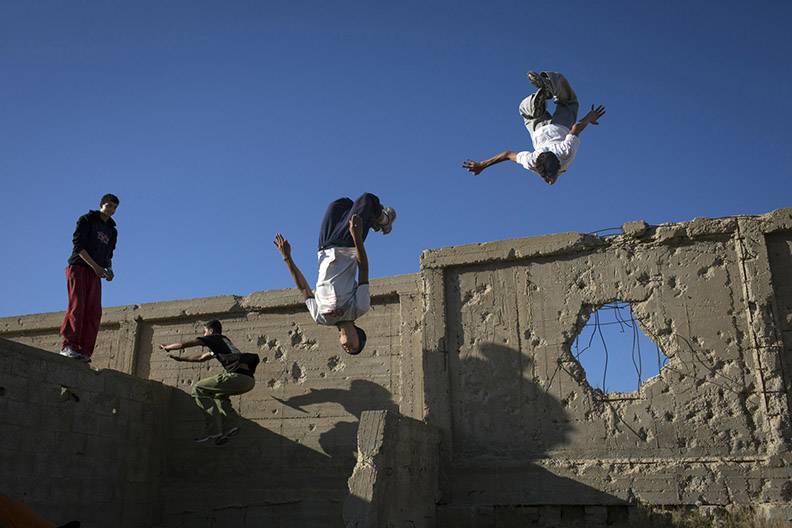 The Gaza Parkour team practices in a cemetery on the outskirts of their refugee camp in Khan Younis, Gaza. The walls show damage from past Israeli incursions. 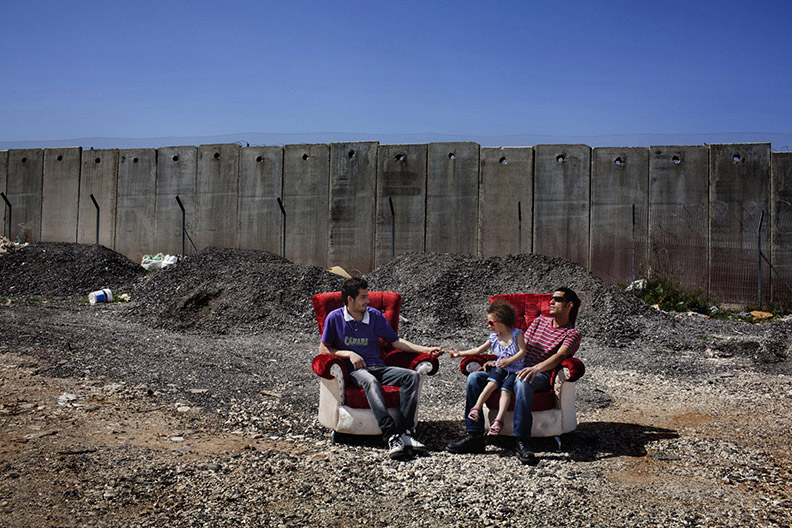 Two furniture makers take a break in a pair of plush armchairs (of their creation) in the open-air in Hizma, in front of Israel's 26-foot high Separation Wall. 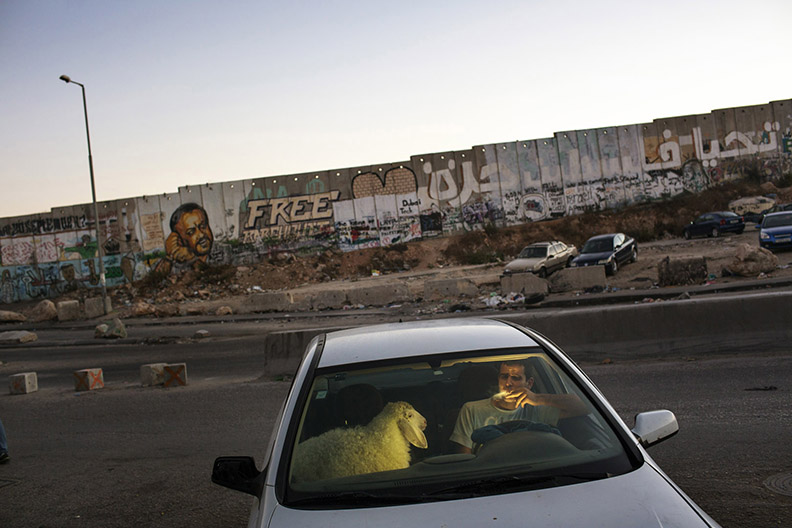 After grueling traffic at the Qalandia check point, a young man enjoys a cigarette in his car as traffic finally clears on the last evening of Ramadan. He is bringing home a sheep for the upcoming Eid celebration. 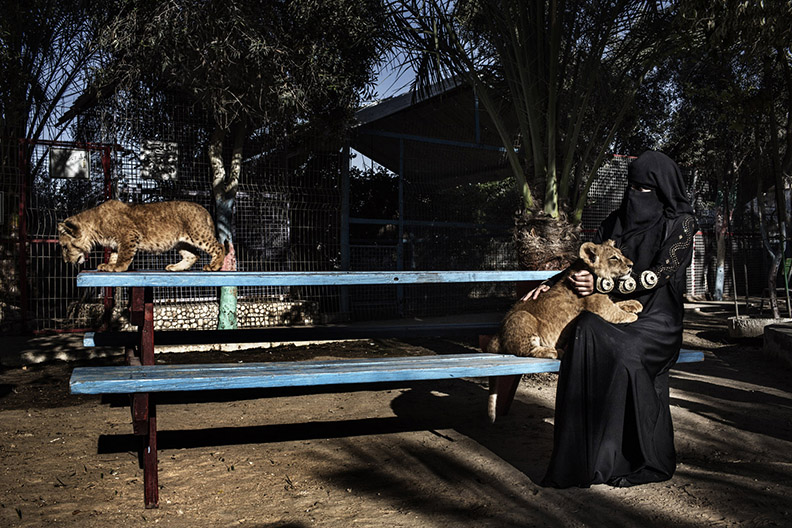 ­A woman plays with two baby lion cubs born in the Rafah Zoo.  Gaza once had six zoos, but two were closed due to financial losses and the deaths of large animals. Gazan zoo keepers are renowned for creativity in limited options, having famously painted a donkey as a zebra, smuggling in animals in the tunnels, and stuffing them once they are dead as animals are not easy to replace. 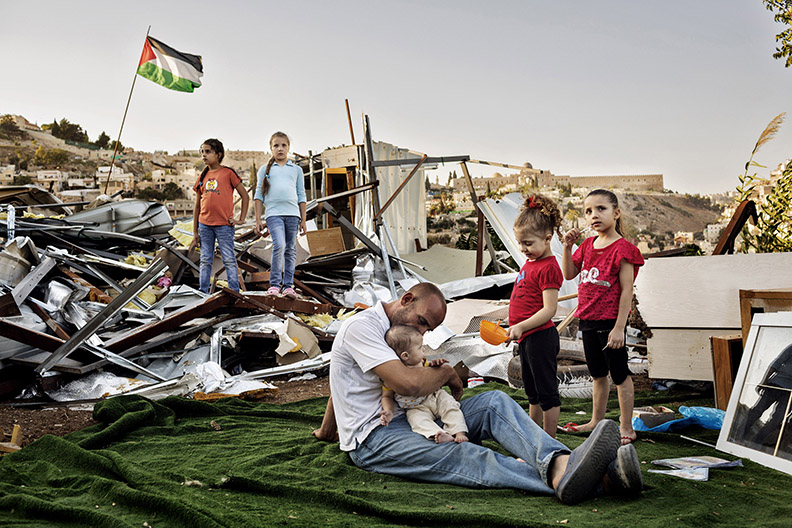 Khaled Zir and his five daughters took a break beside the demolished ruins of their East Jerusalem neighborhood of Silwan. 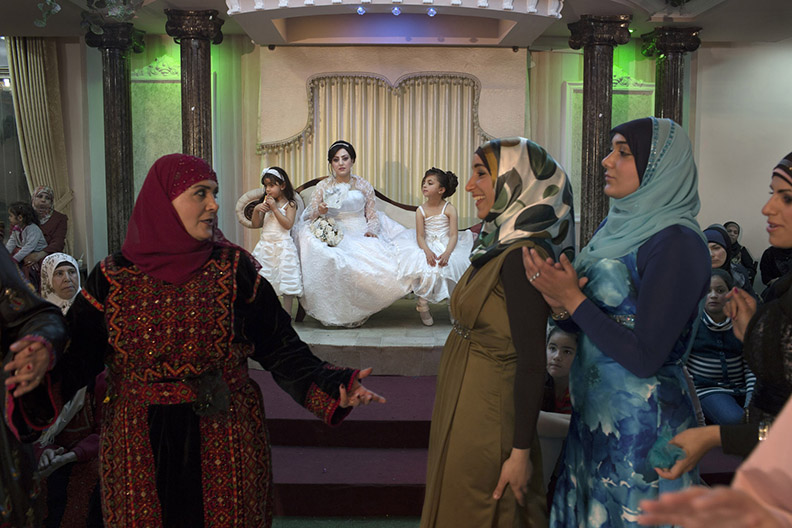 A West Bank wedding celebration during the women only portion of the party. 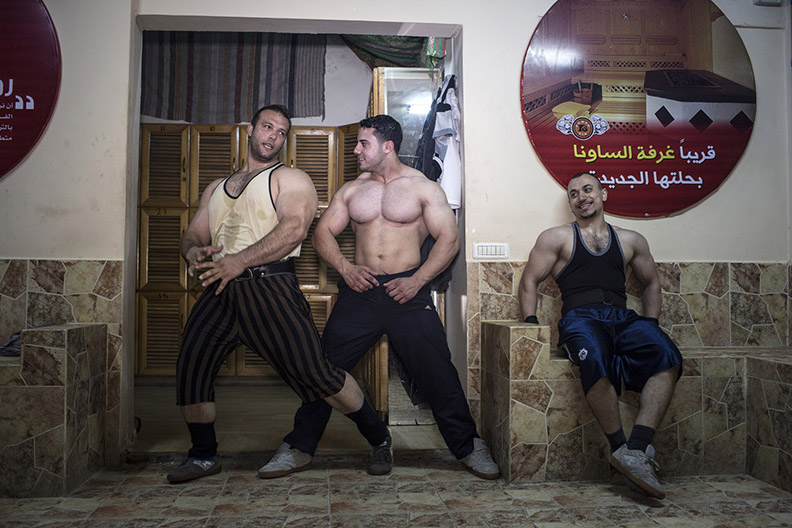 Gazan body builders jovially strike poses after a work out. 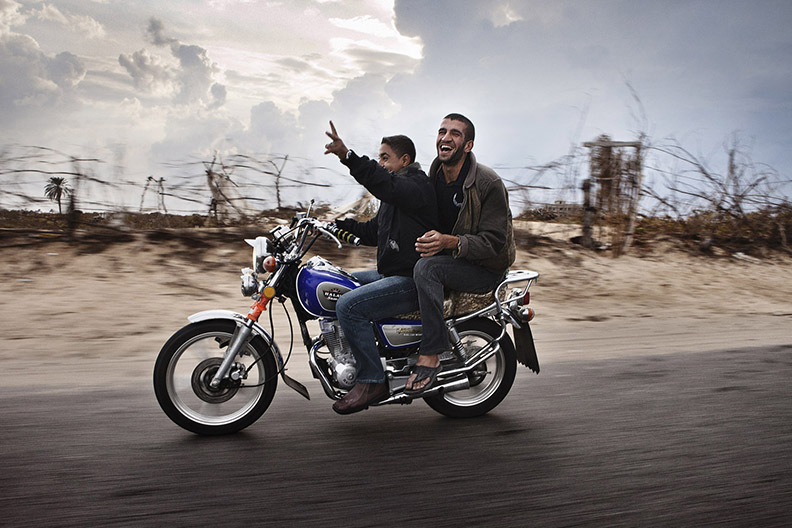 Young men go for a joy ride on the outskirts of Rafah in the Gaza Strip. 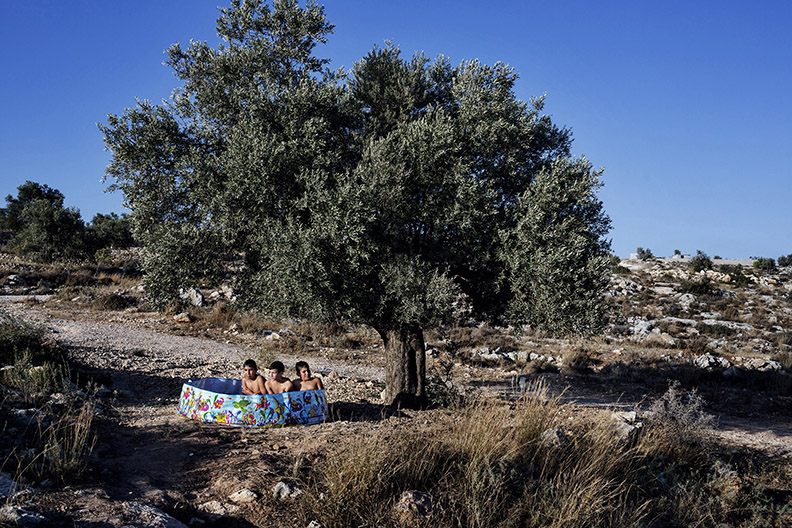