Fernando Moreles - Breaking the CircleThis photo essay is focused on juveniles incarcerated in adult prison under terrible conditions and the new realities they face in Sierra Leone when they are released after long periods in prison without rehabilitation.In 2010, I did a reportage of minors held in the maximum-security prison of Pademba in Freetown, where they were serving time alongside 1,300 adult prisoners. Many of these boys spend years awaiting trial and the lack of legal assistance keeps them defenseless.  Their lives are placed in danger by the long sentences imposed as well as their prison living conditions.  Hygiene is non-existent, food and water are scarce.  There is a constant struggle for survival that sparks tension and violence.  Quite often, the younger inmates suffer brutality at the hands of the older adult population.I followed the lives of some  minors when they were released from prison, both those that have returned to the streets trying to survive, as well as those cared for in a social reintegration program  of the NGO, Free Minor Africa (FMA).  Rehabilitation is related to lowered indices of criminal relapse. 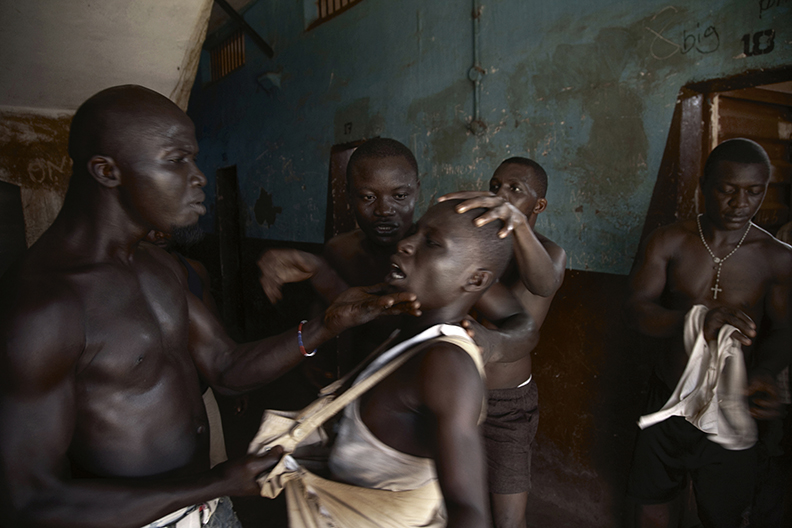 Ibrahim Sesay being interrogated by prisoners  for the disappearance of a pair of slippers. Ibrahim was accused of stealing a mobile phone at his  school. He was arrested in August of 2009 and spent eight days at the police station without food. The police report identified him  as 19 years old instead of 14. He was sentenced to 18 months in Pademba prison. 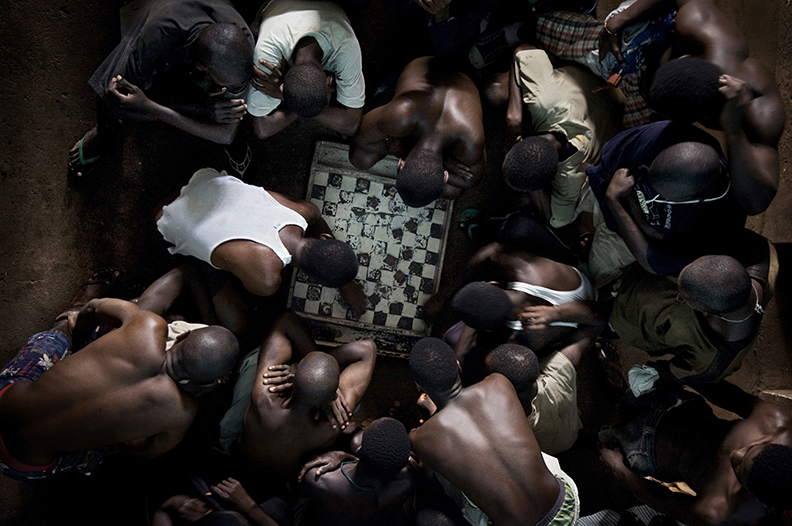 The game of checkers is very popular in prison. Sometimes inmates gamble and often it ends with serious disputes and fights. 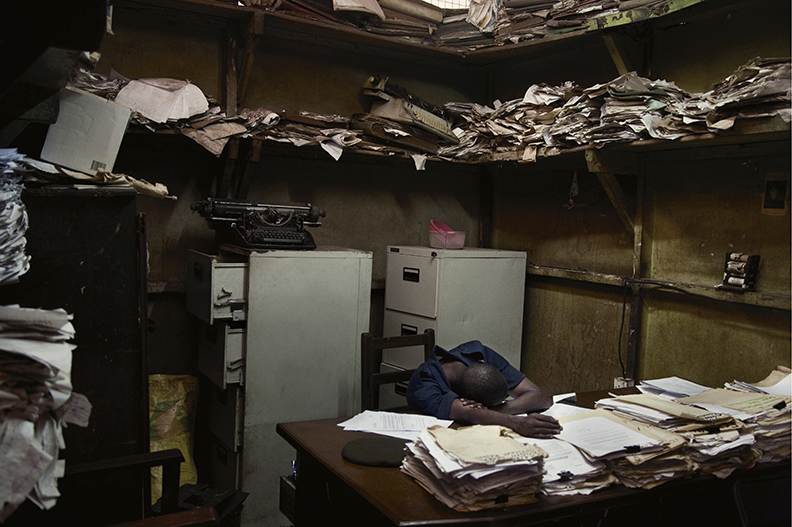 An officer in the registration room. In Pademba there are  around 1400 prisoners and it is not easy to find a prisoner’s records. There  are many similar names and surnames and it is evident that officers are careless and even negligent about maintaining the records. Their  salary of 60 U$ per month doesn’t provide a lot of incentive to be diligent in their job. 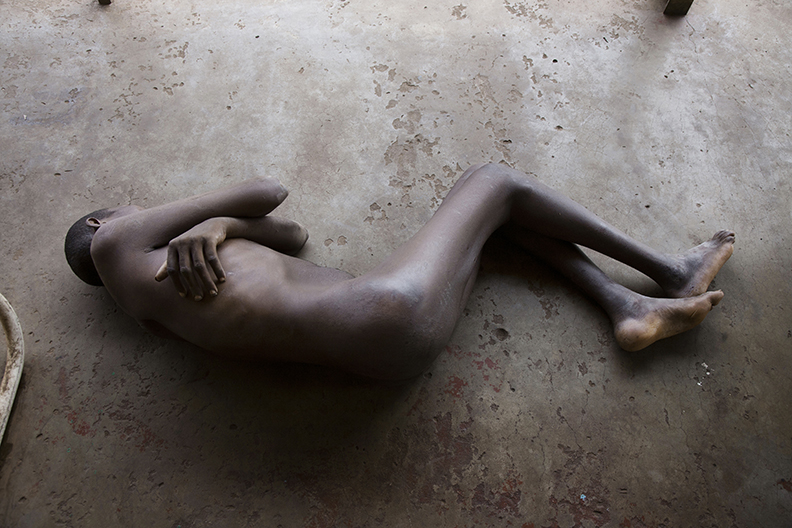 Isaka spent several days lying on the floor of the infirmary  balcony with severe dysentery. He was not able to  stand up.  He has not received visits since his imprisonment in 2008. He was accused of stealing fishing nets. His trial is pending. 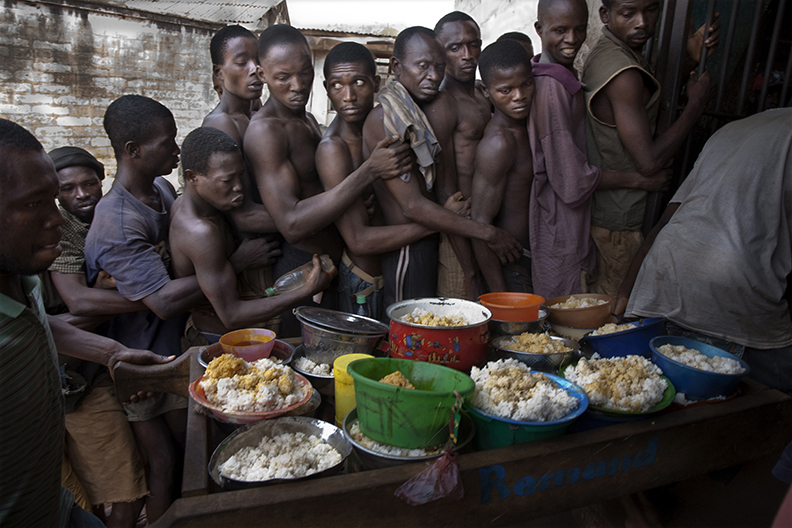 Food scarcity requires to precaution to ensure food delivery. There is only one solid meal daily, consisting of rice and leaves. Juveniles are the big losers in the distribution of food and water. The distribution of water is a big problem with one third of a liter daily and that is not always guaranteed. If you have money you can buy water or food. But the vast majority of prisoners don’t receive  visits and therefore have no access to money. 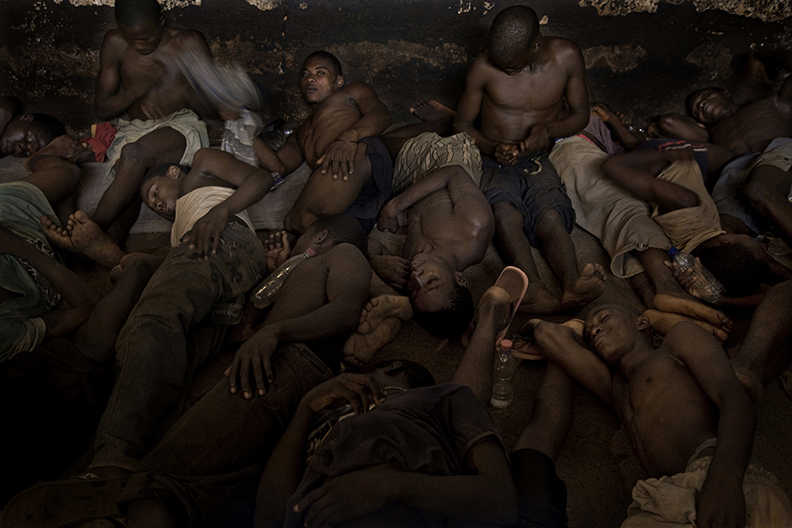 A 30 sq. m. cell for  60 inmates and 16 hours inside the cell. The toilets are a bucket or plastic bags. Most prisoners have scabies and others infectious skiin diseases.  They spent eight months without receiving a bar of soap. The biggest problem is the lack of drinking water. Pre-trial prisoner block in  Pademba. 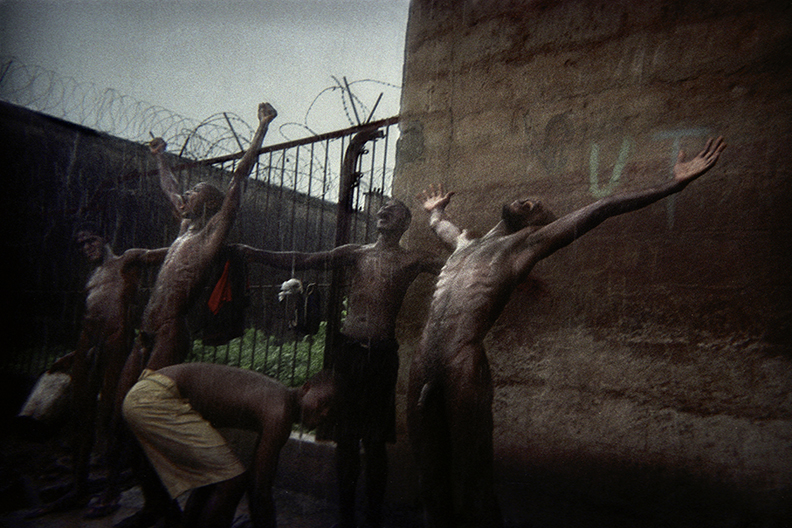 Inmates bathing with rainwater. The raining season has benefits because the inmates can have  a free bath.  One of the main problems in Sierra Leone prisons is the lack of potable water. There is no running water.  Sometimes there is no drinking water at all, except you have  money.  If you  want to  have a bath you  need to pay 1000 leones (0.25U$) for  a bucket. The raining season is a blessing time. 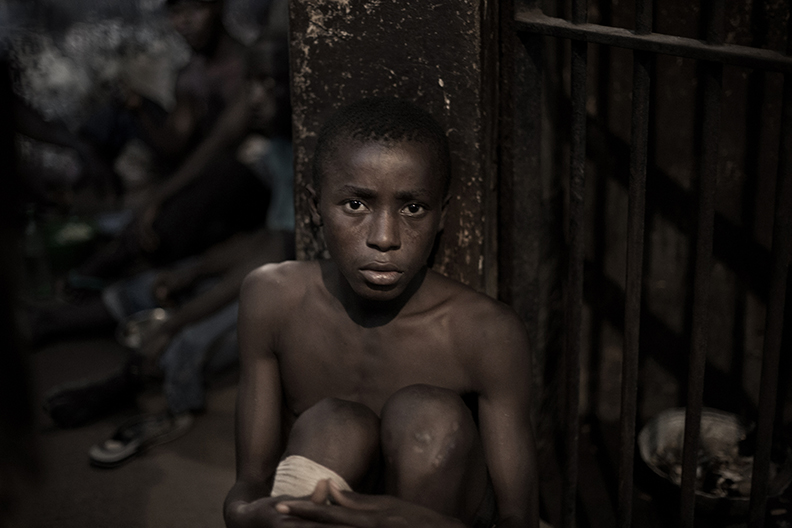 Abdul Sesay was  jailed on July 26, 2010  in pre-trial  section  of Pademba prison , the  maximun  security prison  of  Sierra  Leone. The day  that I met him he had not eaten or had his daily allotment of water. Why?  Because he was too small to fight for food. 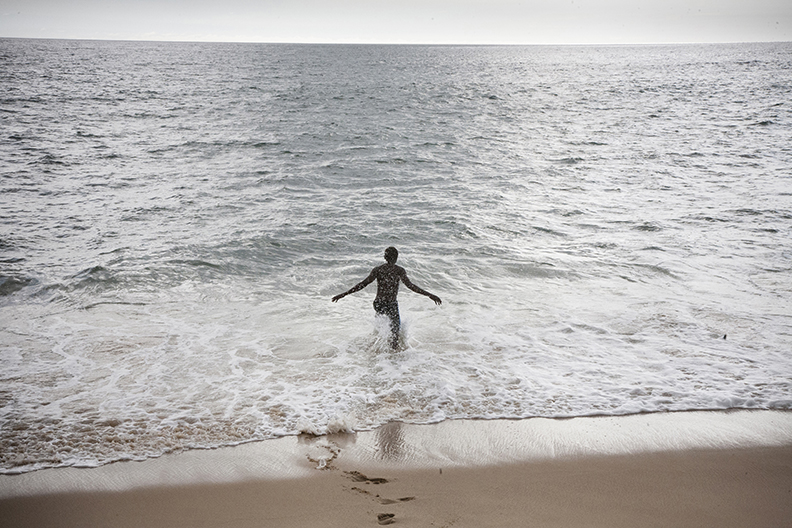 Abdul  Sesay was freed in October 2012 from his indictment. He entered the rehabilitation center of Saint Michael, where he took his first bath for a long time. 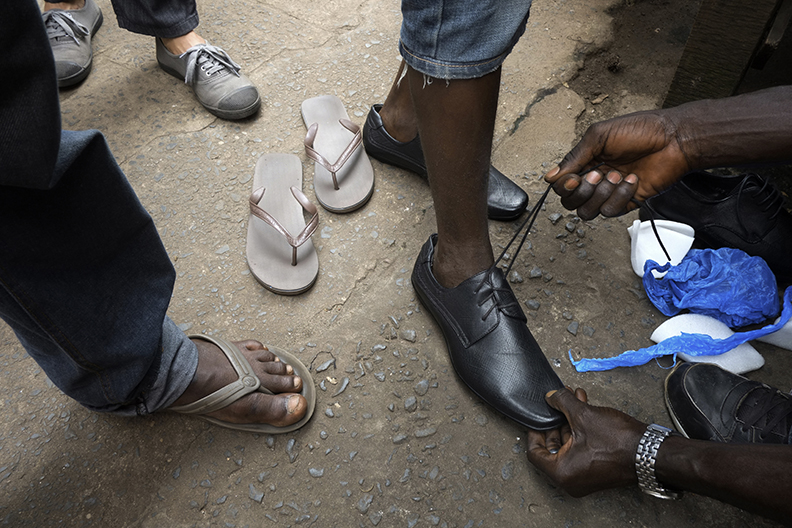 Abdul  Sesay was  accused of stealing a phone. He was incarcerated in Pademba prison. He was  discharged at the trial in the juvenile court after I paid the  cost  of  the  mobile phone to the owner. The NGO Free Minor Africa accepted him into the social rehabilitation program. Here  he is buying  shoes for school. 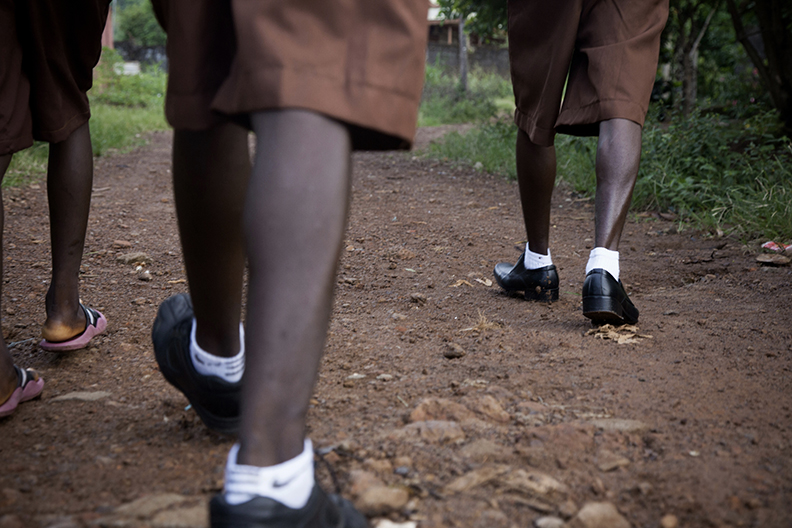 Abdul with his new shoes. After five years without school, he  now returns to the class under Free Minor Africa rehabilitation program.  He is  at  class  5 of primary  school  with much younger students  and he is living in Saint Michael center, 20 km away from Freetown. 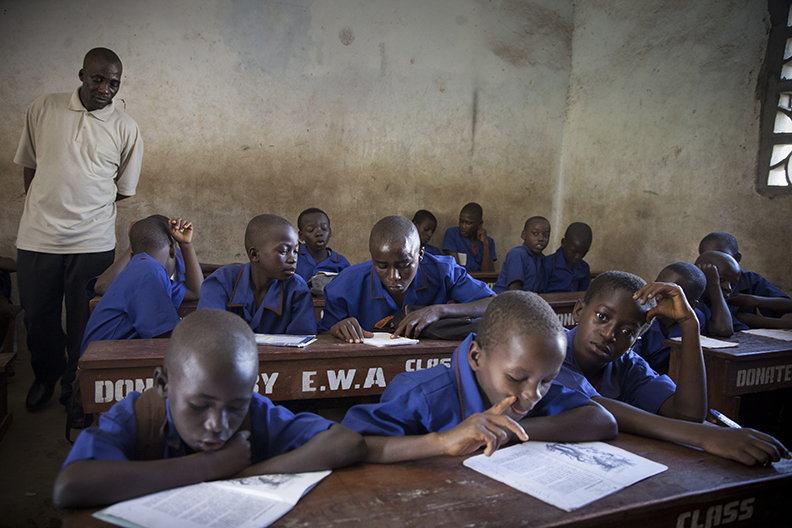 Abdul Sesay at class 5 of primary school with much younger  students. He is  very  keen to  go  to  school and recover the lost  time  on  the  streets. 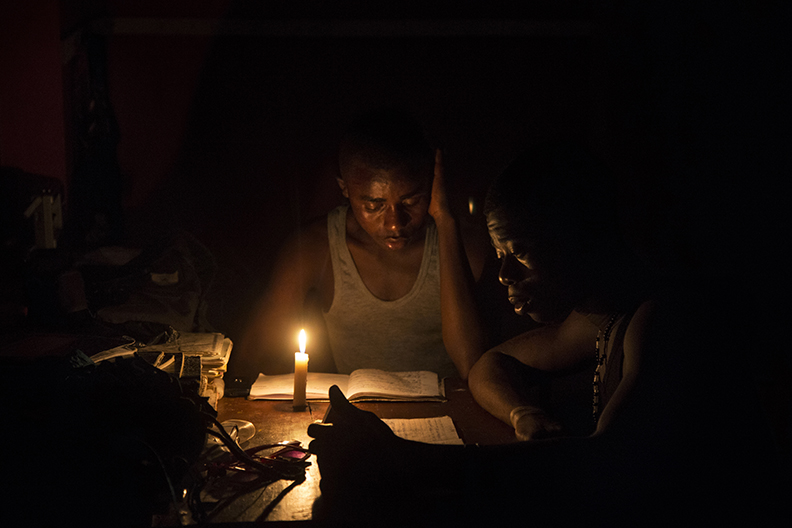 Abdul Sesay studying at  Saint  Michael  center, March 2013, He is finishing primary school and  wants to continue meanwhile is doing carving class in afternoons. Abdul  is inside Free Minor Africa  program to  reintegrate  in  society  after six  years living on the  streets and several times in prison.