Joao Piña - Shadow of the CondorIn 1975, at the height of the Cold War, six Latin American countries - Argentina, Bolivia, Brazil, Chile, Paraguay, and Uruguay  - that were ruled by right wing military dictatorships created Operation Condor. It was a secret military plan aimed at eliminating political opponents using shared military resources and shared exchanges of information, prisoners, and torture techniques. This extensive campaign carried out over a period of more than three years resulted in the “extrajudicial executions” of at least 60,000 people, mostly leftist youths inspired by the Cuban revolution and its role models, Fidel Castro and Che Guevara. The number of victims may be much higher but cannot be confirmed, both because of the secrecy in which the repression took place, and because many of the mass executions were carried out in ways so that the bodies “disappeared” forever in oceans, rivers, and unmarked mass graves. From the Amazon jungle in Brazil to the cold open lands of Patagonia, thousands of victims remain buried in unmarked graves, while the survivors struggle to cope with their own memories. I have witnessed survivors and families dealing with problems such as acute depression, paranoia, and other psychiatric illnesses due to the immense traumas they underwent at the hands of the regimes that ruled 30 years ago. The secrecy of Operation Condor has endured because of the nature of the political transitions that took place. In most of the countries involved, sweeping political amnesties for the military were forced upon the fragile democracies that succeeded the dictatorships by powerful militaries. It has taken years for these amnesties to be overturned and, in some places, it remains an ongoing battle. Many relatives of the victims still don’t know what happened to their loved ones and the majority of those responsible for their deaths and disappearances have never been brought to justice. The main challenge in this project was to create images of something that happened in the past.  By returning to the places where the torture and disappearances took place, along with portraying survivors and families of the “desaparecidos” in the present, contrasting it with archival images taken by local photographers and the security forces in the past, created a visual narrative on one of the darkest periods of South America’s recent history. A documentary project of this scope covering all six “Condor” countries has never been conducted, especially with a photography component. It is my hope that the resulting images can be used not only to create a visual memory, but also to provide legal evidence to help survivors and human rights organizations bring those responsible for Operation Condor to justice. 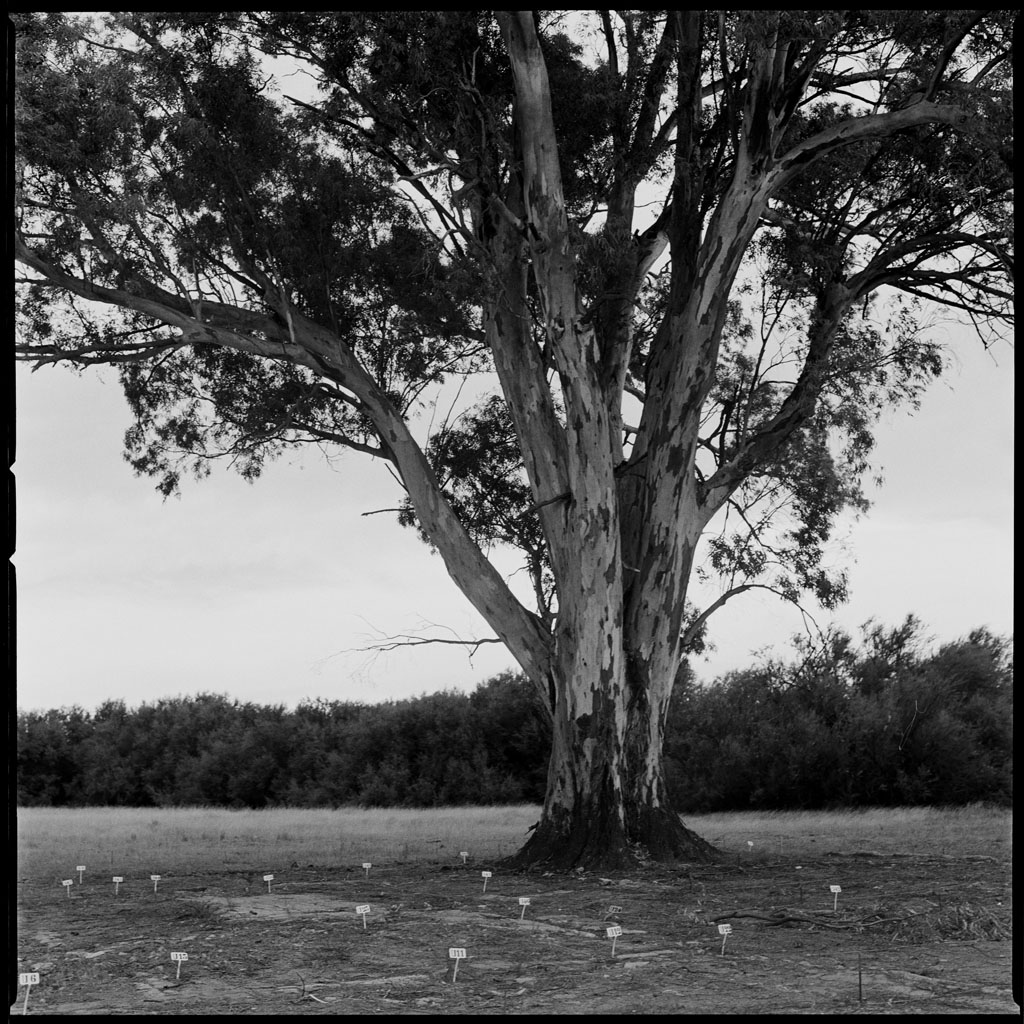 The archeological marks of what used to be "La escuelita" a former clandestine detention and torture center used by the army to interrogate and kill left-wing militants during the military dictatorship 1975-1983, in Bahia Blanca, Argentina. 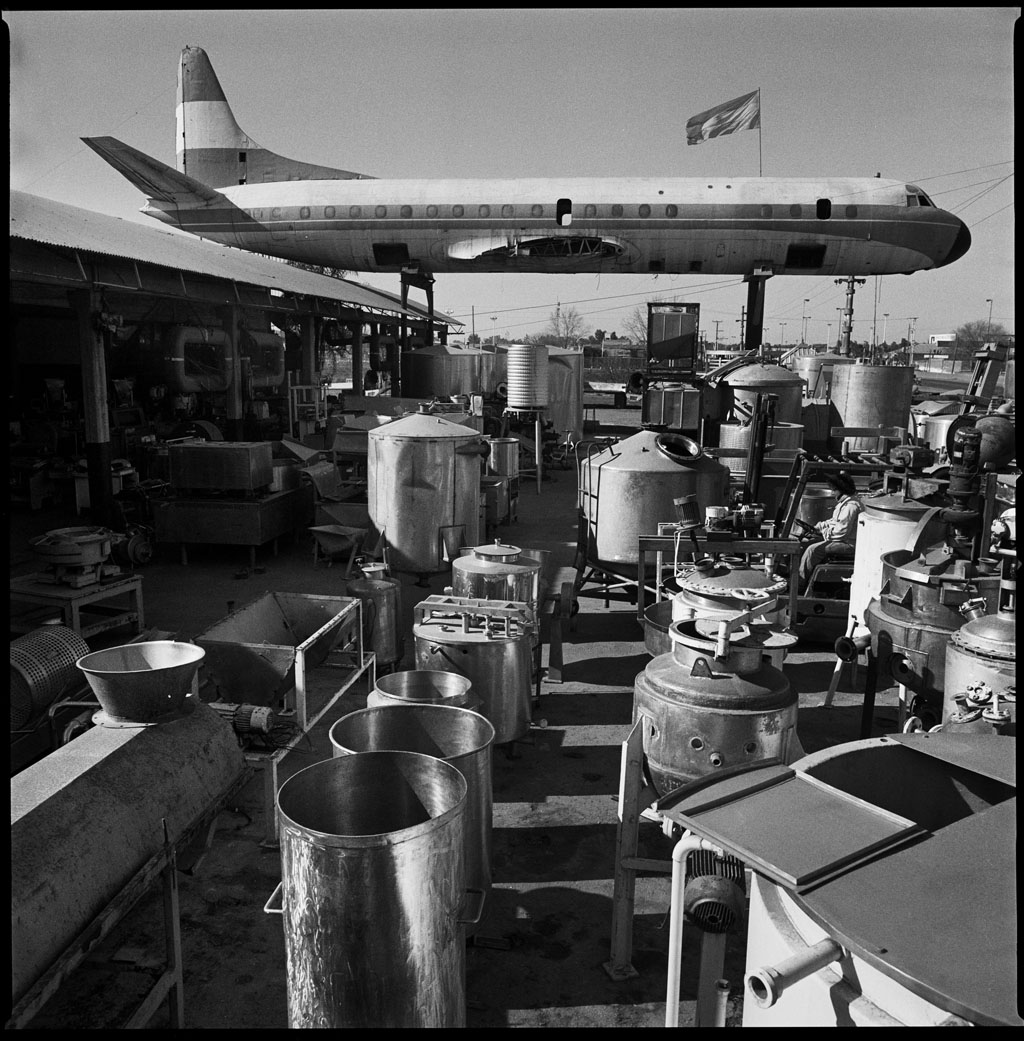 An airplane used by the Argentinean military for “Death Flights” to drop left-wing militants alive into the La Plata river and Atlantic ocean during the military dictatorship is now used as an advertising object for a construction materials store on the outskirts of Buenos Aires. 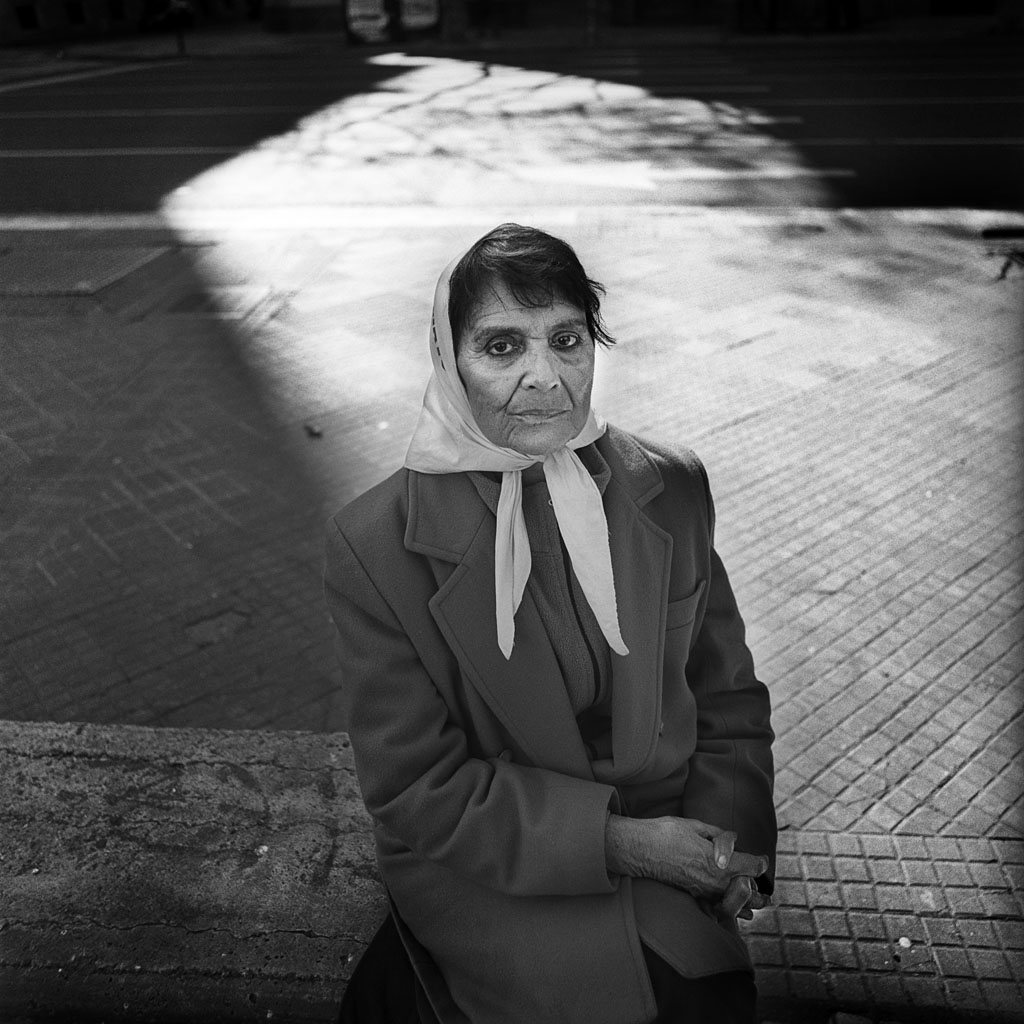 03- Tati Almeida, a member of the Mothers of the May Square movement in Argentina. Ms Almeida had her son Alexander Almeida arrested and disappeared by the Argentinean military in the early 70's. Buenos Aires, Argentina, August 2006. 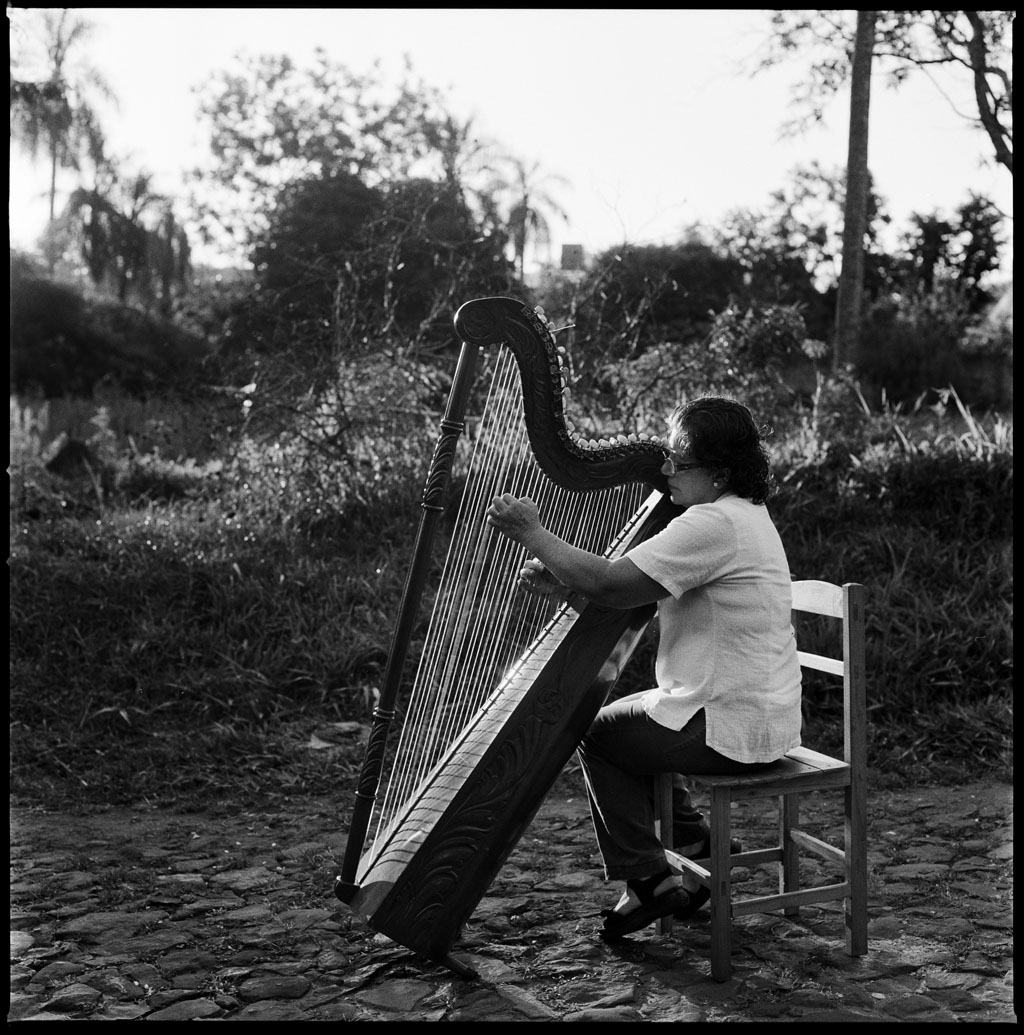 Celsa Ramirez, a former Paraguayan political prisoner and a member of the Paraguayan Communist Party, playing the harp near her house in Ita, Paraguay.  Ms. Ramirez played the harp since she was a child, but during her years living underground as a member of the communist party she couldn't play for safety reasons. Only recently did Ms. Ramirez come out of the traumatic experience during the underground years and the years she spent in jail, and started to play again. Ita, Paraguay, November 2012. 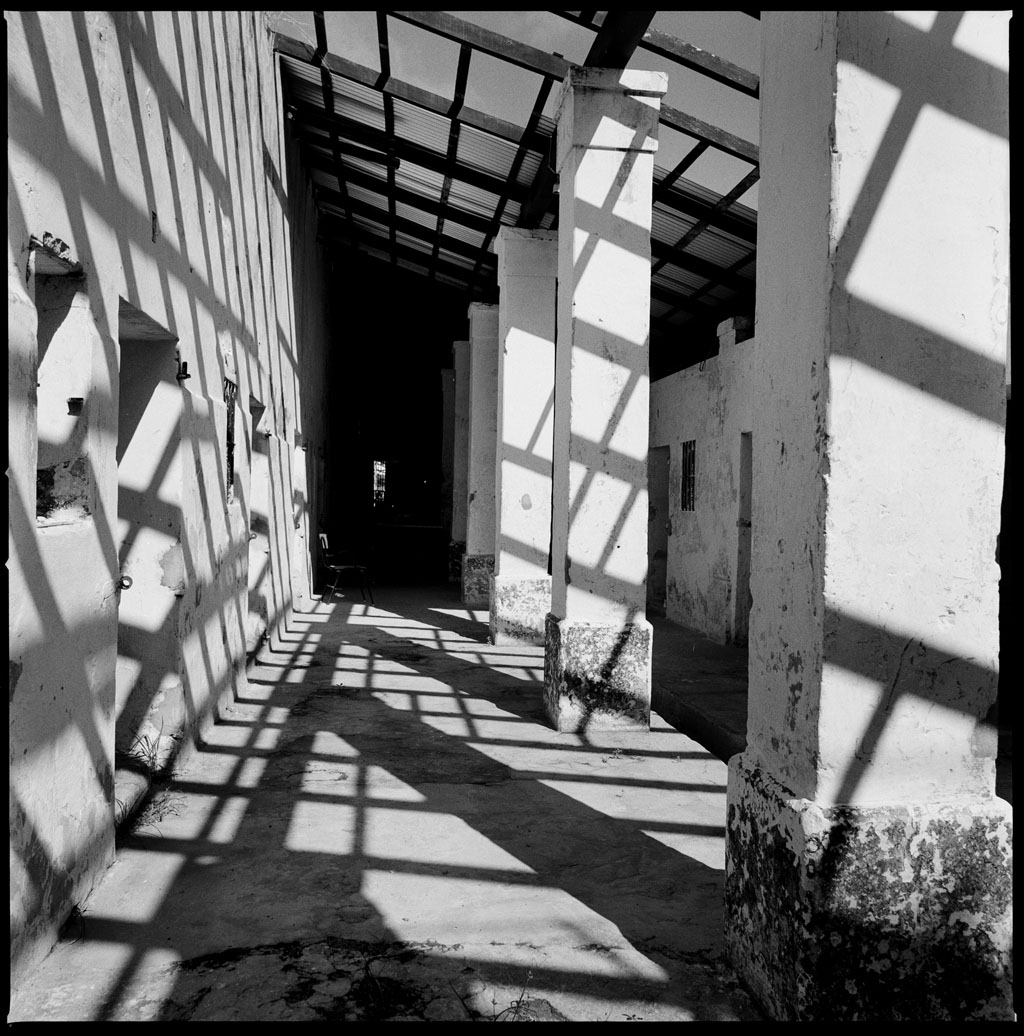 A view of what used to be the cells of the Emboscada concentration camp in Paraguay. This camp was built for detention of political prisoners in Paraguay during Alfredo Stroessner's military dictatorship. Today the place is a high-security prison and the former cells are used for workshops and as a school for the inmates. Emboscada, Paraguay, November 2012. 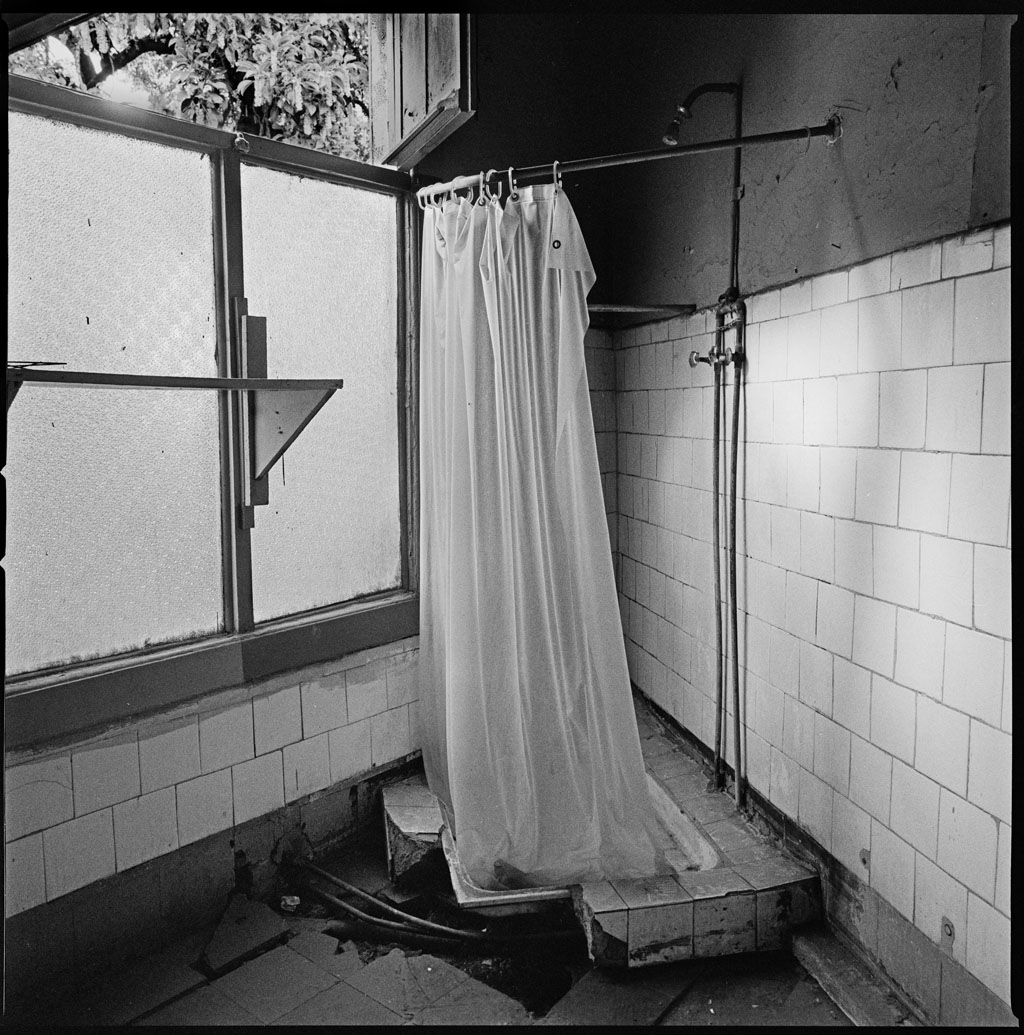 A detail of a bathroom in Londres 38,  a former clandestine detention and torture center during the military dictatorship of Augusto Pinochet in downtown Santiago de Chile. 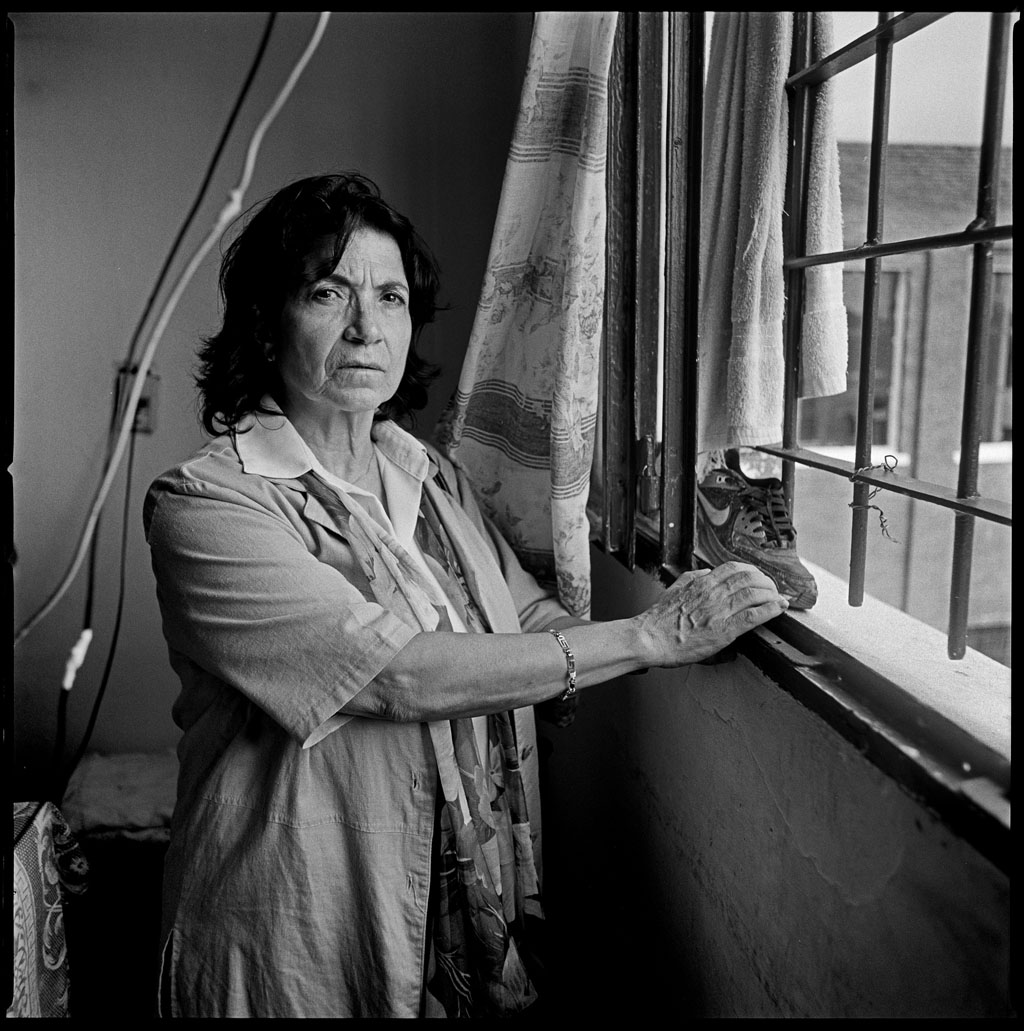 Anahit Aharonian, looking from the window of her former cell in the Punta de Rieles prison in Montevideo, Uruguay.  Ms Aharonian is a descendant of survivors of the Armenian genocide and was born in Uruguay. She became involved with politics in her teenage years and embraced the Tupamaro movement. She was arrested by the military during the early days of the Uruguayan dictatorship and spent 12 years in jail during Operation Condor. 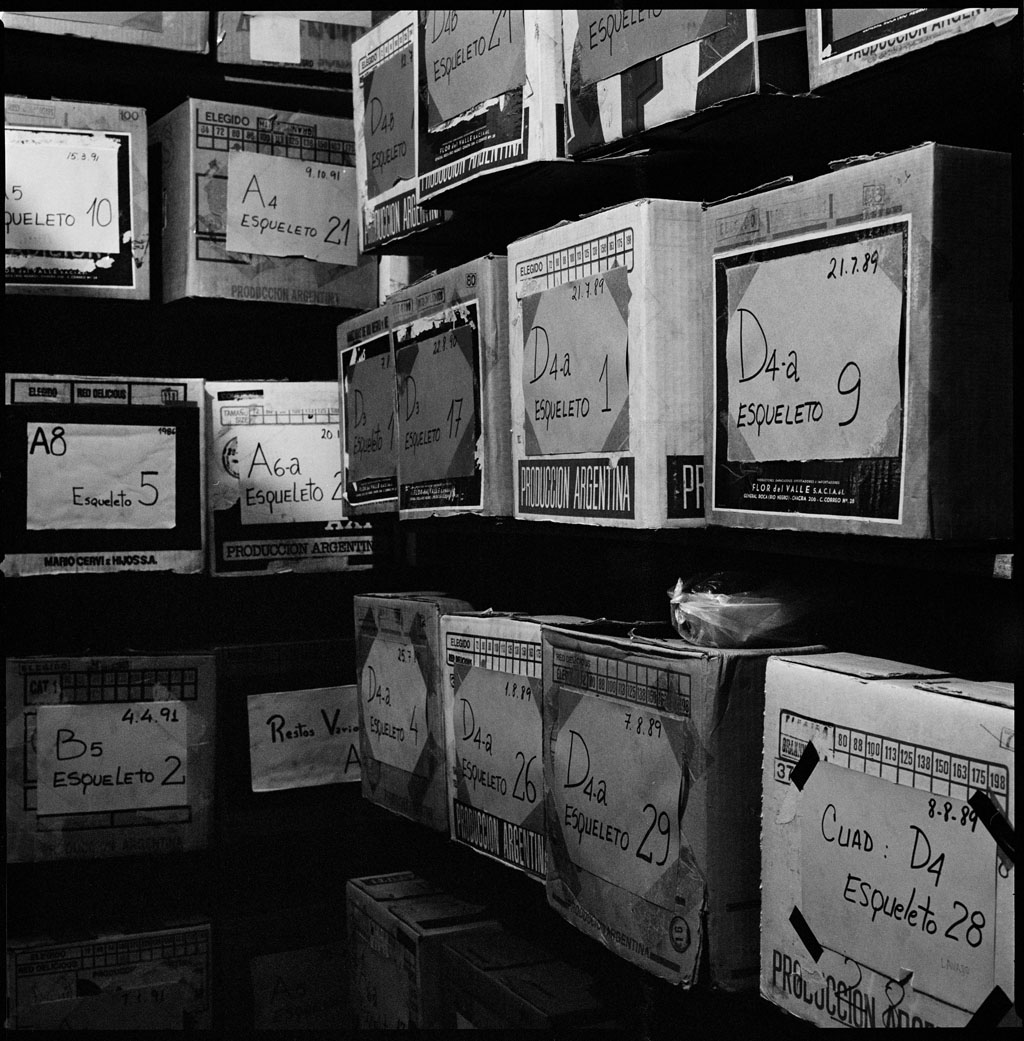 One of the storage rooms of the Argentine Forensic Anthropology Team (EAAF) filled with boxes of recovered remains of disappeared people. These remains are in storage to be identified and are returned to the families of the disappeared only when there is very strong evidence of identification. Buenos Aires, Argentina, January 2012. 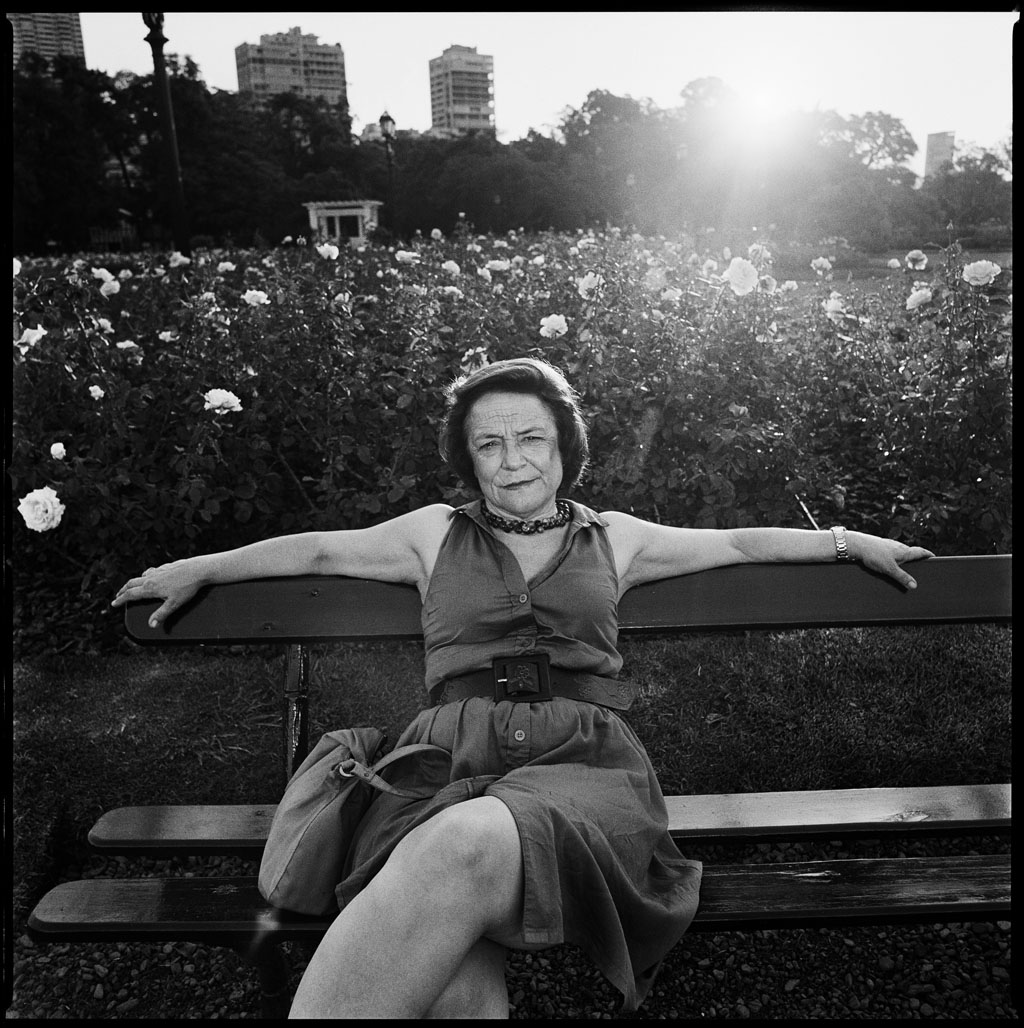 Mirta Clara, a former Argentine political prisoner. Ms Clara was arrested with her husband in November 1975 for being part of the Montoneros political group. While in custody she was tortured while pregnant with her second son, who today suffers from mental problems.  Her husband was executed in what is known as the Margarita Belen massacre and she spent eight years in jail, being released only after the first democratic elections in 1983.  Today she lives and works as a human rights advocate and psychologist in Buenos Aires.  Buenos Aires, Argentina, February 2012. 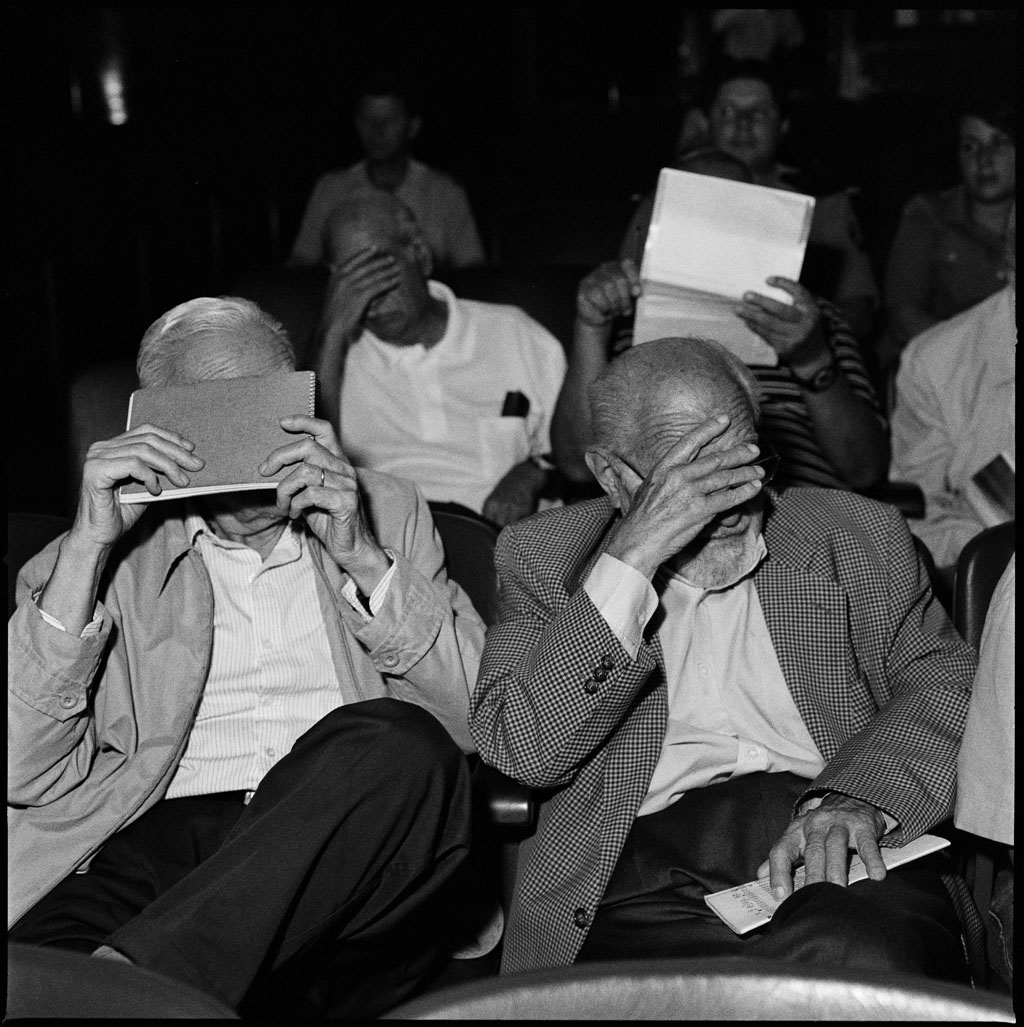 Former military men, hide their faces from the photographer during  their trial for crimes against humanity during the dictatorship from 1976-1983. 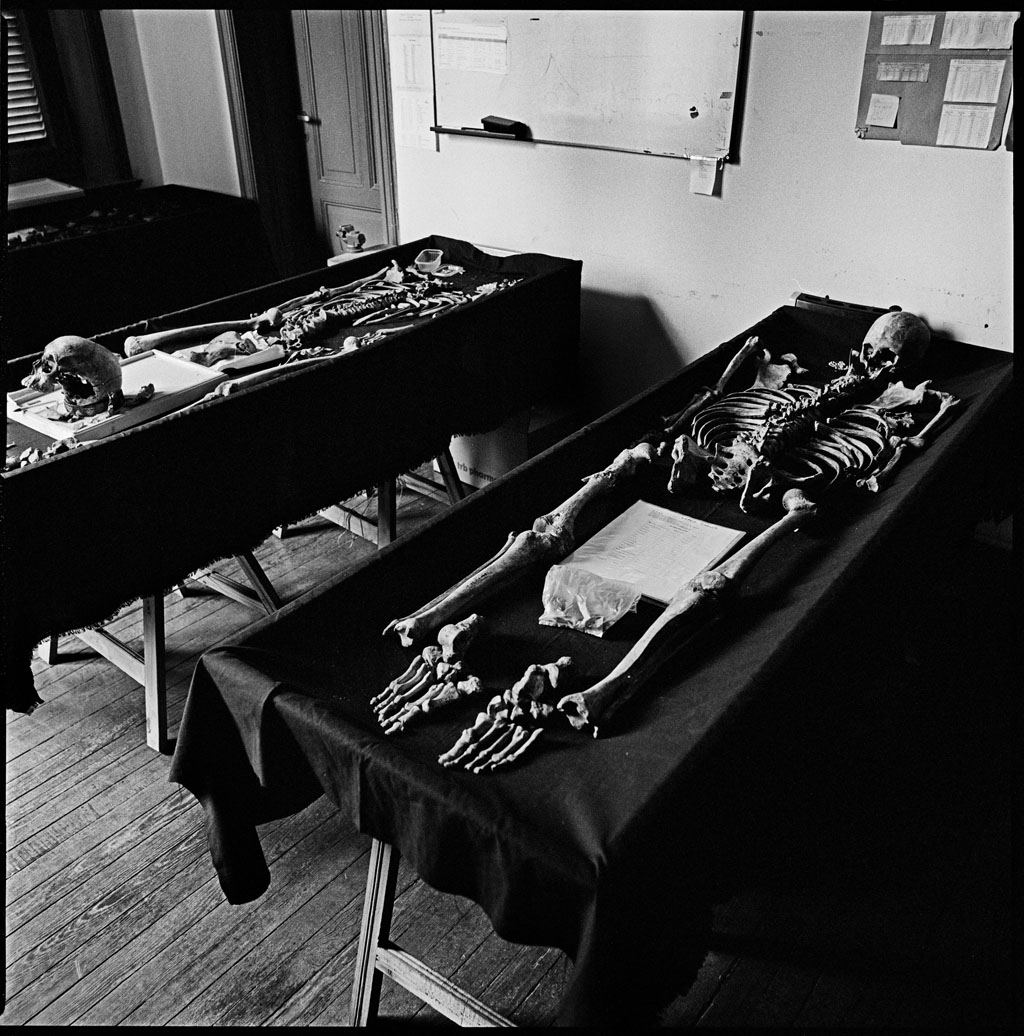 The remains of two bodies of the disappeared lay in the lab of the EAAF (Argentine Forensic Anthropology Team) in Buenos Aires to be studied and to try to make an identification. Buenos Aires, Argentina, January 2012. 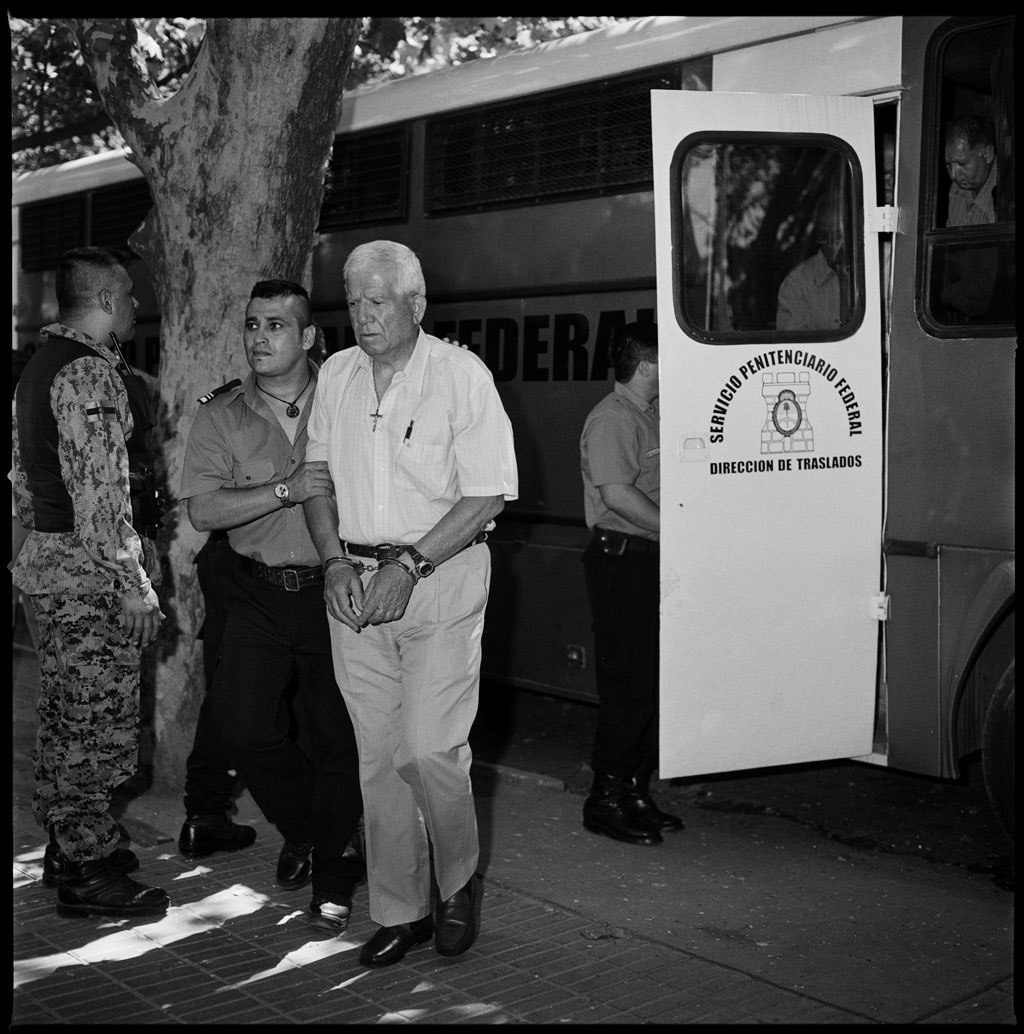 Colonel Hugo Delme (white shirt) being transported from jail to the court house in Bahia Blanca by prision guards. Mr. Delme is a retired army colonel accused of being involved in crimes against humanity by torturing and disappearing left-wing militants during the last Argentine dictatorship 1976-1983. 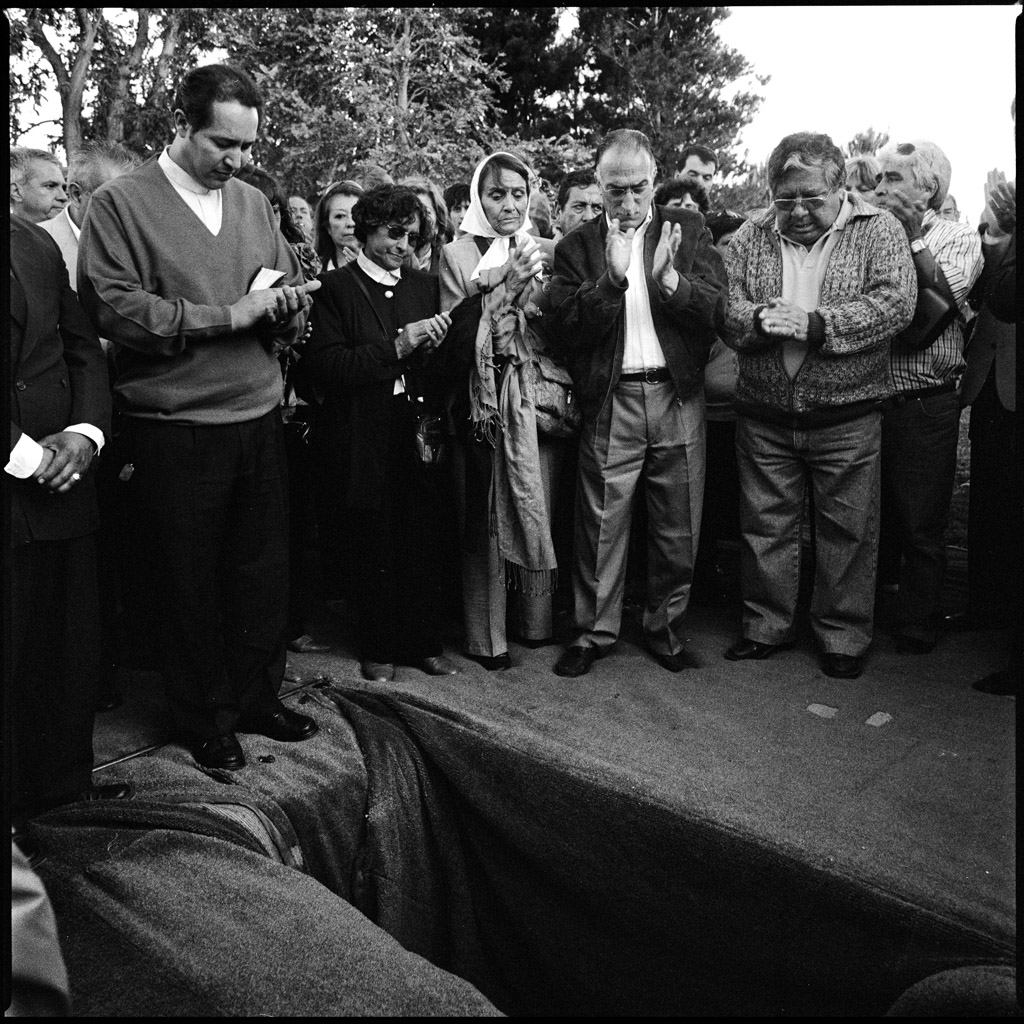 The funeral of Horacio Bau a left-wing Montonero militant from Trelew in the Argentine Patagonia who disappeared in La Plata, Argentina in November, 1977. His remains were found buried in a cemetery in the city of La Plata as a "no name" in early 2007 and the burial ceremony took place in Trelew in November 2007. 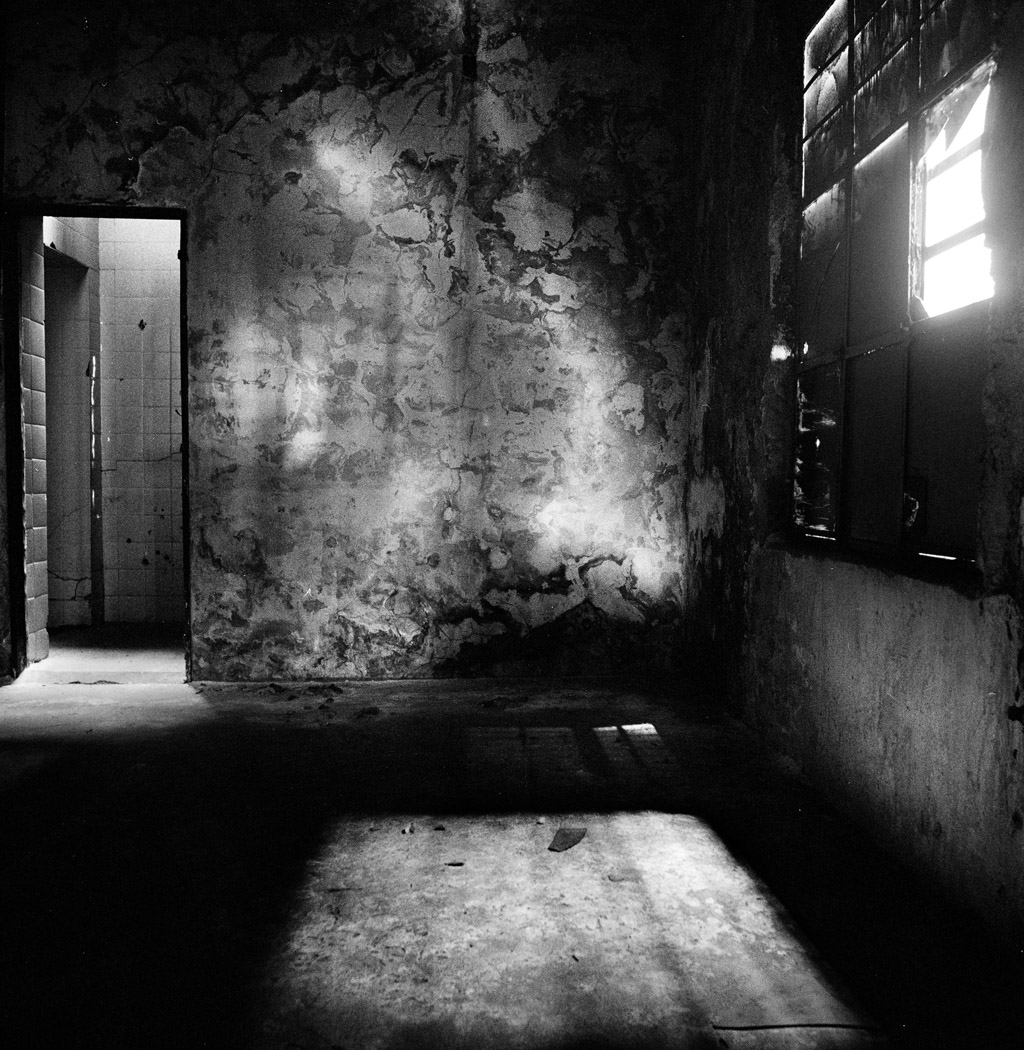 The torture room of "Olimpo" a former clandestine detention and torture center used by the federal police and military to interrogate and kill left-wing militants in Buenos Aires, Argentina during the military dictatorship 1975-1983.