Ingetje Tadros - This Is My Country

‘‘This is My Country’ is a compelling look at people balanced on the precipice of life, who are largely disenfranchised, neglected and, often, forgotten.

To document Australia’s indigenous people, I travelled to remote regions of Australia’s vast and unforgiving outback and spent time in Aboriginal communities. I witnessed a high incidence of alcoholism, domestic violence, general health issues and an alarming frequency of suicide: communities fractured and in distress. I documented sections of communities mismanaged by their governments, not fully understood by the wider aid community and largely left unseen by most of Australian society. A voiceless and unseen minority consigned to lives of quiet desolation.

One day I heard about a young boy who was lost and who suffered from alcohol syndrome. The whole community went out to look for him. They found him two days later, in a croc-infested country where he had been attacked by a croc. This story and many others, especially the suicides in these communities, compelled me to start documenting Aboriginal people: to give them a voice. I feel strongly that the Aboriginal people are not treated with the respect they deserve as the Original Peoples of this country. When you sit with the people and hear their stories, the depth and beauty of these people becomes obvious. Their connection with the land, their Country, and with their families are things we all can learn from.

I took photographs that make visible and make heard the plight of the most exposed and vulnerable people in Australian society. I tried to reveal many of the moments that are often under-represented in the documentation of Australia’s original inhabitants. Their approach to community, family, nurture, spirituality, nature, story -telling and, importantly, healing.

I want my documentary photography to question, communicate and debate the most pressing social issues facing society today: to remind us not to turn a blind eye to the suffering of our fellow man. 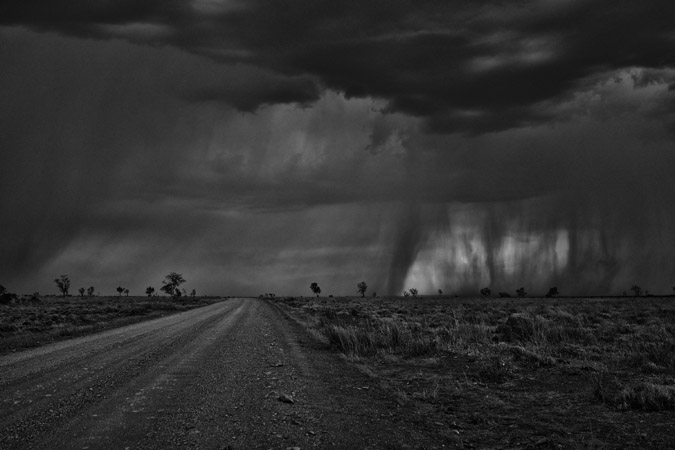 A sweeping government policy of settlement closure and dissolution of Indigenous Australian communities is devastating people who live in them. The displacement policy creates a painful physical, emotional and spiritual disconnect from their sacred land. The Kimberley,Western Australia. 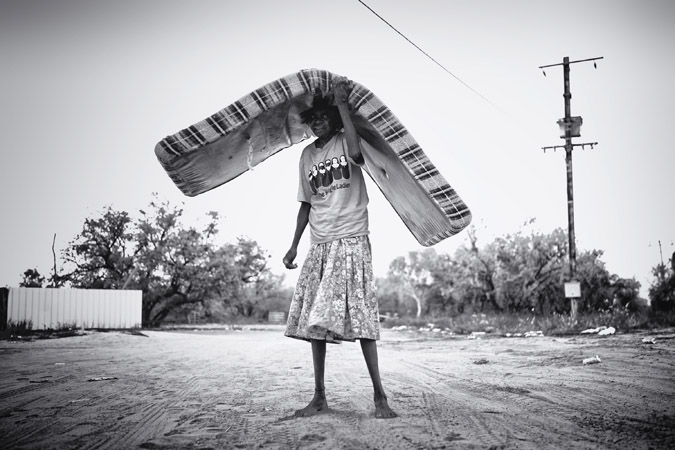 A lack of affordable, short-term accommodation for Aboriginal people moving in from remote communities has led to people camping on bush blocks and parks in town. Lydia is moving her mattress to the side of the road. One Mile community, Broome, Western Australia 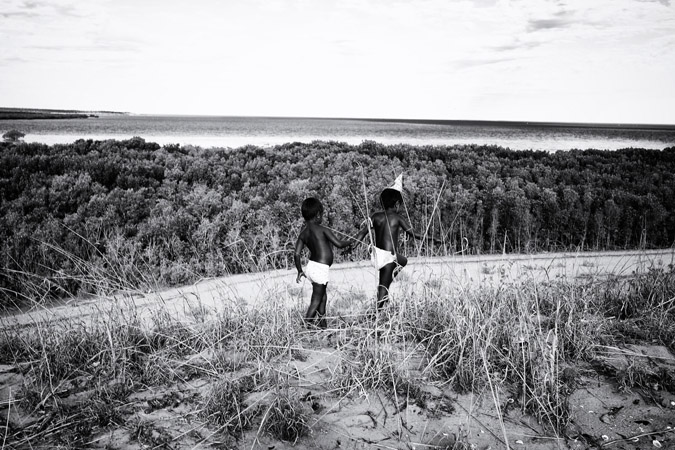 Meah (5 years old) and Marjorie (3 years old) playing on ‘the Hill,’ sand dunes behind their family home in Kennedy Hill. Free as little birds they run and play in the sand dunes, unaware of the problems their community is dealing with. This is a very beautiful place: the sand is white, the water is turquoise, the sky is blue and the view is spectacular. This is a pristine location.  Broome, Western Australia. 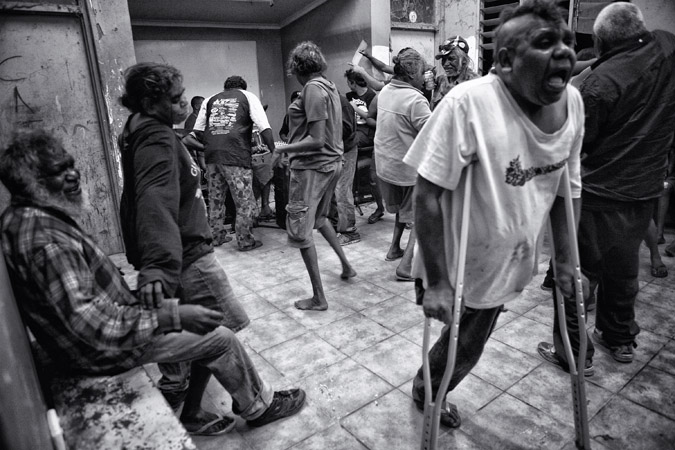 A 21st birthday party is celebrated by homeless and residents in the old office in Kennedy Hill, which has now been demolished. Broome, Western Australia. 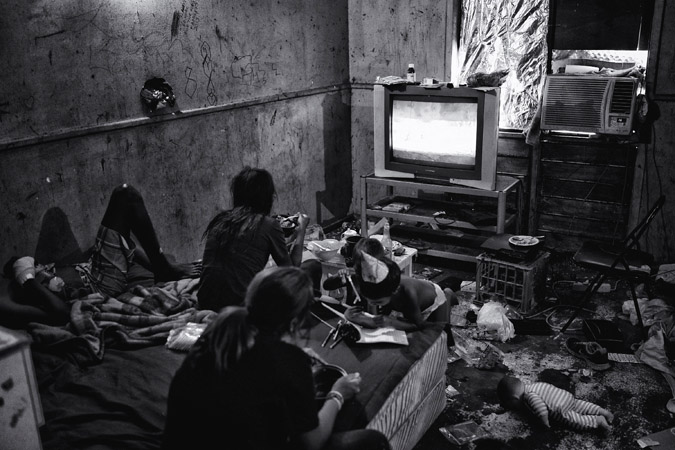 Liam, Charlette, Quane, Marjorie and Megs relaxing while watching television in Charlette’s room. Tourists fly in from all over the world to Broome to enjoy the Cable Beach resorts and the surrounding pristine environment but for the residents of Kennedy Hill this reality is totally removed from their world. Broome, Western Australia. 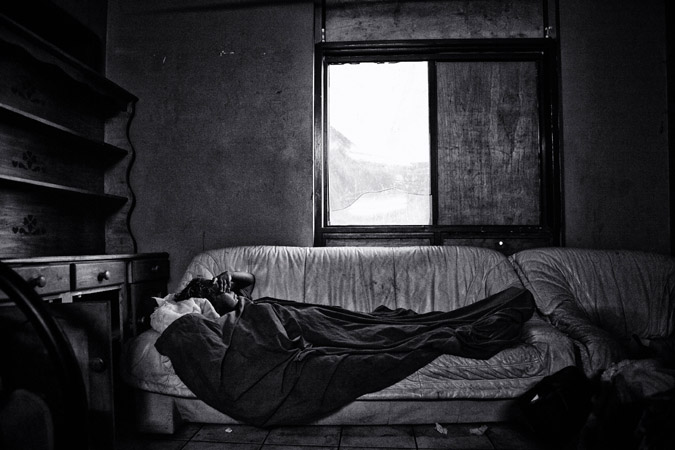 Amanda Lewis lays on the couch in Esther’s house in Kennedy Hill wondering what the day will bring. The word is that Kennedy Hill will slowly but surely be completely demolished. There are now seven dwellings left. When all the dwellings are gone, where will all the people moved on by the Mallingbar Aboriginal Corporation go? The land may either be sold or developed in some sort of joint venture.  Broome, Western Australia. 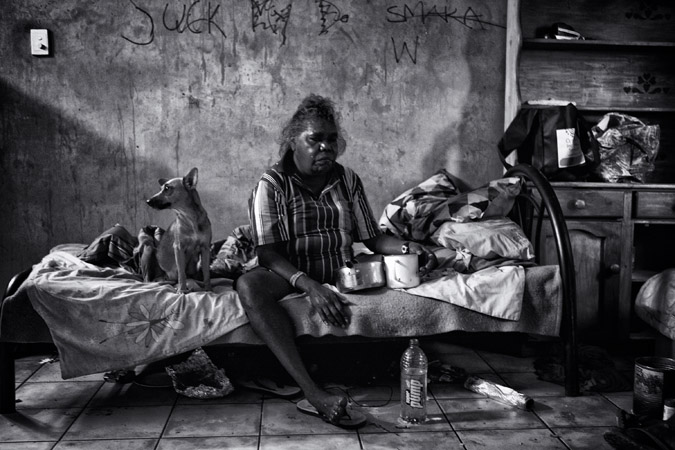 Esther Yumbi having breakfast in her home in Kennedy Hill. Due to excessive alcohol consumption, she has been diagnosed with kidney disease and now is being treated in Perth Hospital 2300 km away. Broome, Western Australia. 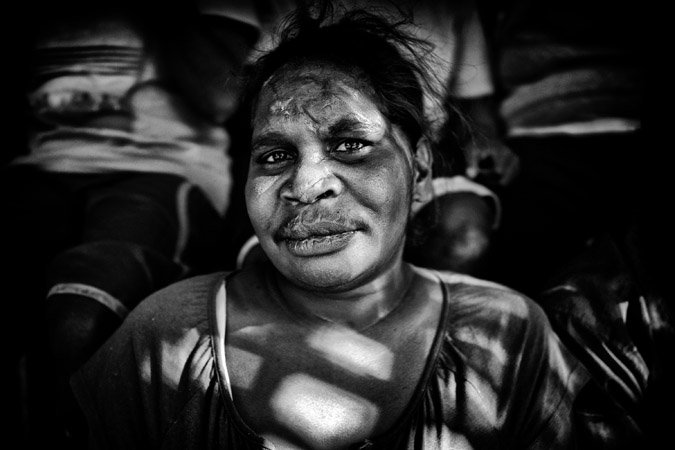 An Aboriginal woman is 45 times more likely to experience domestic violence than a white woman. Violence patterns are passed on from parents to their children. In Australia it takes police up to two years to respond to cases of domestic violence and take victims seriously. Broome, Western Australia.  “They had no more use for Aboriginal people. . . when they closed down the stations we lived in, they moved us out. That’s how Balgo and surrounding communities started.” Hityer Gordon, Kununarra, Western Australia. 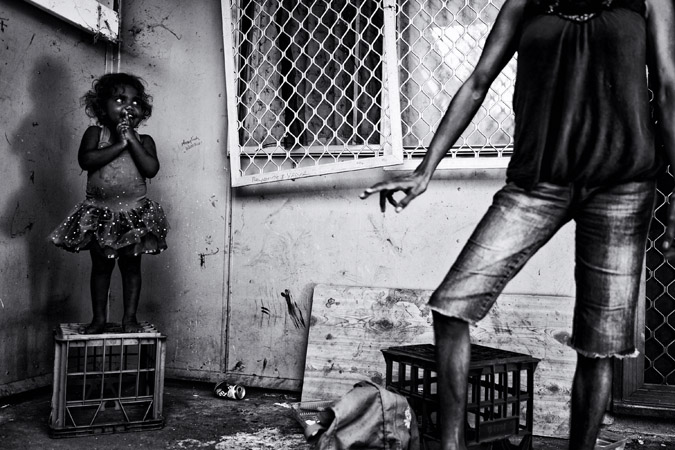 “I did not have any support from Goverment’s Services after I lost my niece in Mowanjum. One and a half years later I am still waiting for assistance of services or organizations to talk about a lot of things that’s happening in our Community. Naa, nothing still happening! . . . Are they too selfish, too ignorant and too proud in the head to deal with the issues and not the people?” Sharon Wiggan ® and her little niece Antoinette. Broome, Western Australia. 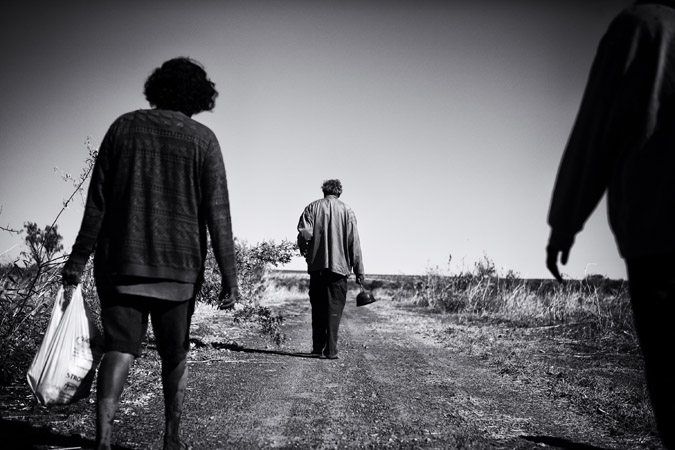 Suicides have increased and many are homeless. Others had no option but to move in with family members as not enough new houses where provided.

In 2011, all families living at Oombulgurri were evicted from their homes after the government of Western Australia deemed the community “unviable”. The government demolished the Aboriginal homelands community of Oombulgurri in 2014. 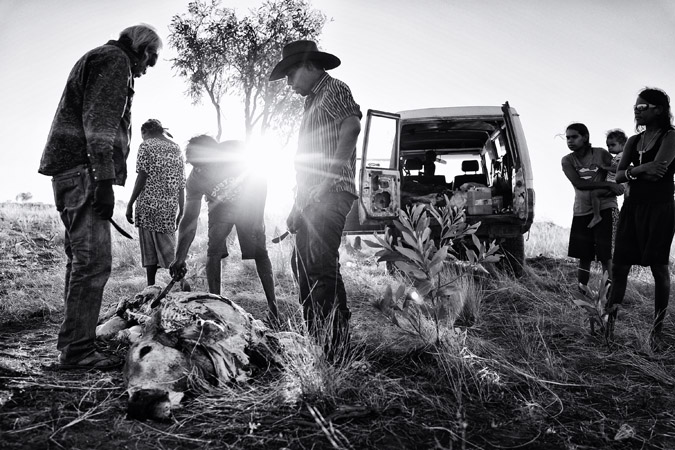 Although many refused to leave, Western Australia’s Government closed the health clinic, school, police station, store and shut off  the town’s power and water. The last residents from Oombulgurri were relocated to Wyndham, the northernmost town in the Kimberley region. Oombulgurri’s residents and traditional owners have been fighting to return ever since.

Before the white men invaded, Aboriginal people had a great food source to choose from which came from the bush, the land, the sea and the waterways. The people have a great understanding of the changing seasons and the natural environment. Aboriginal people on the coast would have a diet of shellfish, turtles, dugon, fish, and berries.  People inland would have fresh water fish, yabbies, emu, duck, kangaroo, snakes etc. 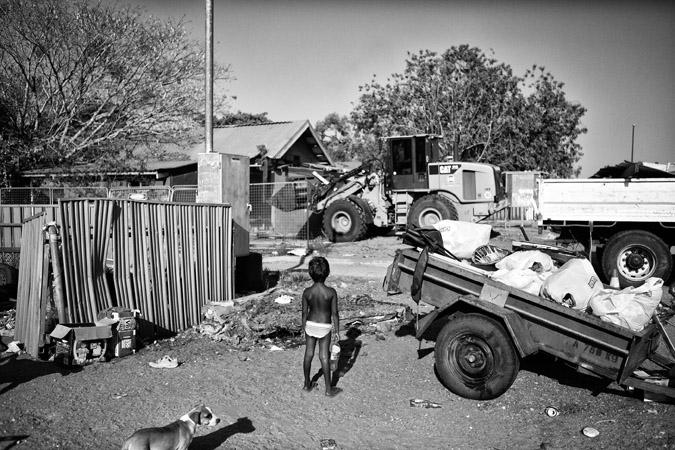 Meah (5 years old) standing outside her family home watching the bulldozer demolishing Kennedy Hill’s office. By now, four houses and one office have been demolished and seven houses remain.  Recently the Premier of Western Australia, Colin Barnett, committed to closing down approximately 150 remote Aboriginal Communities in Western Australia. What will the future be for Kennedy Hill? Broome, Western Australia. 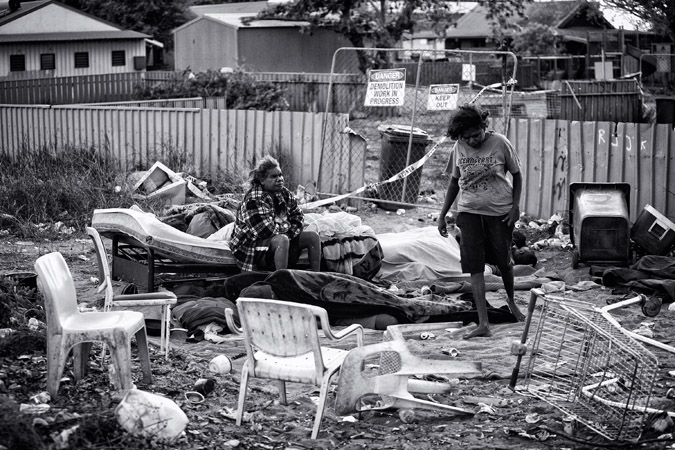 Sussanne Charmawina and Jacquelin waking up in their new camp, on the other side of the fence, as the condemned house they used before in Kennedy Hill has now been demolished.  Even today, this camp is still being used by many homeless people. Broome, Western Australia. 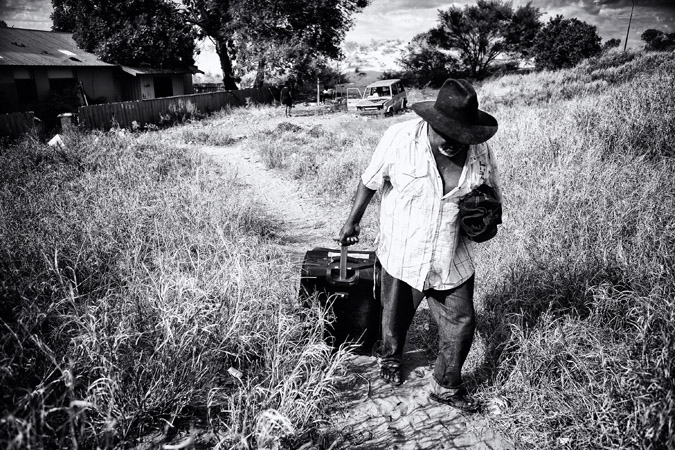 Alan Dededar leaving Kennedy Hill on his way to Centacare. Centacare Kimberley in Broome provides a range of services to people who are homeless, at risk of becoming homeless or are experiencing financial hardship. Centacare have an outreach team that engages with people sleeping rough throughout the Broome area, with a primary focus on finding access to social housing.  Centacare runs a homeless breakfast. Alan is from Balgo a dry community (alcohol is not permitted) and was squatting in a condemned house in Kennedy Hill, which has now been demolished. Broome, Western Australia. 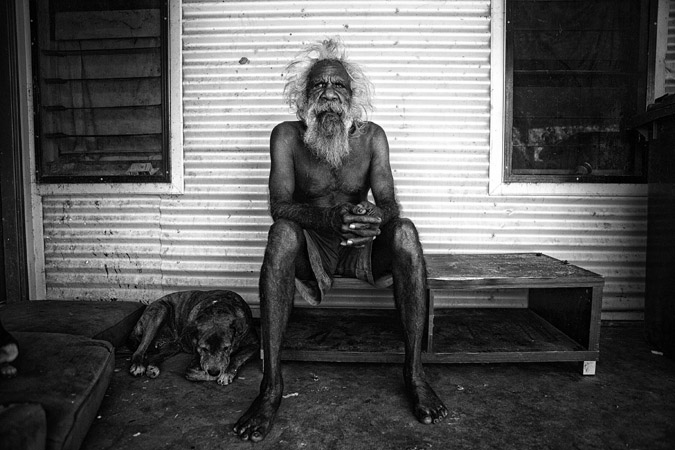