Before the Islamic Revolution in 1979, Iran under the Shah had close relations with the United States, which saw it as a reliable ally and an important bulwark against the Soviet Union. With its vast oil reserves, Iran was a pivotal power in the Middle East and the Shah's drive to secularize the country aligned with Western intentions. All this changed, however, with the revolution that brought Ayatollah Khomeyni and his anti-Americanism ideology to power. For over twenty years, the news and imagery of Iran has been dominated by chador-clad women, flag burning demonstrations and the reports of nuclear skullduggery. The reality of daily life, however, is much more complex and diverse.

Hossein Fatemi, born and raised in Iran, has been photographing his native country for over 15 years. What emerges from his images is a very different picture of a country that has been demonized and isolated for years. Over 60 % of Iran's 73 million people are under the age of 30 and have little, if any, knowledge of their country before its transformation into a theocratic state. Despite this, Iran's younger generations are champing at the bit to break free from the paternalistic oppression of the Mullahs' republic and experience all the usual trappings of youth and modernity that are increasingly being beamed into homes via the internet  and the still-illegal satellite TV. Iran's Basiji volunteer militia prowls the streets looking for women whose headscarves reveal too much hair but behind closed doors, Iran's largely secular majority tries to live life as undisturbed as possible.

The country has increasingly become a nation of two halves with public office largely held by vetted individuals of spotless Islamic credentials and a large majority navigating a precarious path through the thicket of religious legislation and custom. Mixed parties where alcohol flows liberally, DJs playing Western music to dancing audiences, increased access to officially banned websites, organized prostitution and a worrying proliferation of hard drug use, are all signs of a slow but pronounced divergence between what Iran's Islamic government perceives to be the rightful state of society and the realities lived by the majority of citizens. While the state tries to contain certain practices such as prostitution and pre-marital sex with work-arounds such temporary marriage, where two people enter a marriage agreement that can last for as little as an hour, it has proved impossible to curtail liberal, western influences with the spread of internet use in Iran. Daily, millions of young people engage in activities that are officially illegal and can carry severe penalties. While the government likes to think of Iranian society as a monolithic unit occupying the moral high-ground in stark contrast with a degenerate, immoral West, the reality of daily life in the Islamic Republic is one which bears all the hallmarks of a modern hybrid with all the usual problems and vices.

Over the years, Hossein has tried to document all parts of Iran's complex society, lifting the veil on some of the less observed areas of daily life, showing the conflicts that arise between the official version of Iranian life promoted by the authorities and the reality of daily life for Iran's youth, struggling to find an identity in a fast moving, ever changing world. Travelling across Iran for over a decade, meeting and convincing hundreds of individuals to allow him into their lives, observing the interaction between different types of people in their daily lives, Hossein shows a complex and changing society from the inside. The deal recently reached between Western governments and Iran which is meant to ensure that the country's nuclear program remains exclusively civilian is now promising a loosening of the sanctions regime that has throttled the Iranian economy and may yet lead to a political opening in its wake. 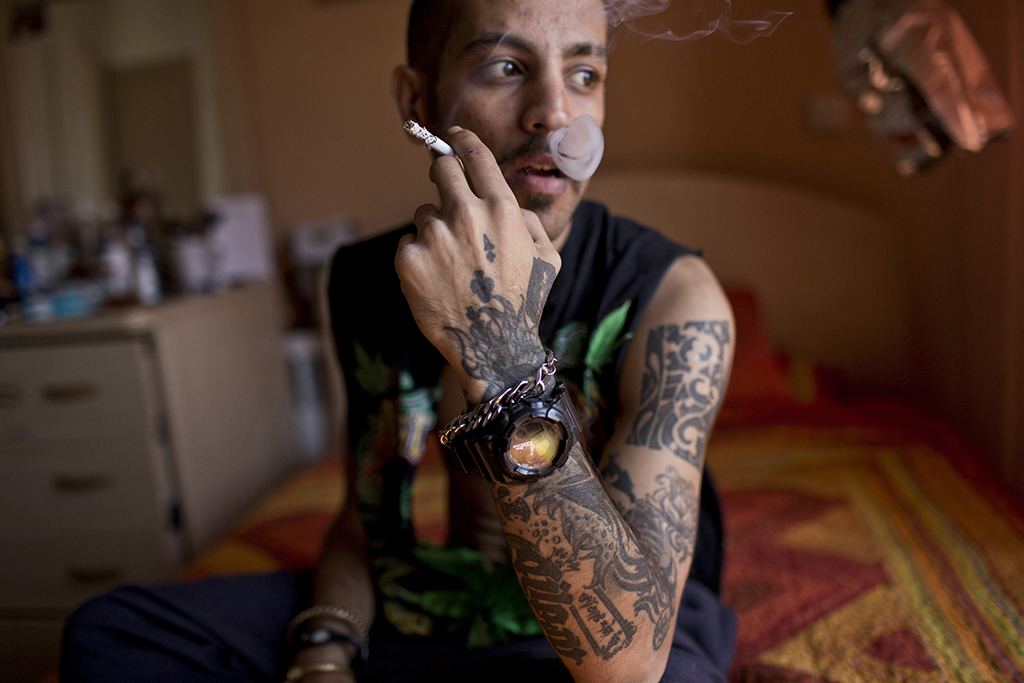 Siavash, a tattoo artist, smokes a cigarette. While not illegal, Islamic law is often used to denounce those sporting tatoos. 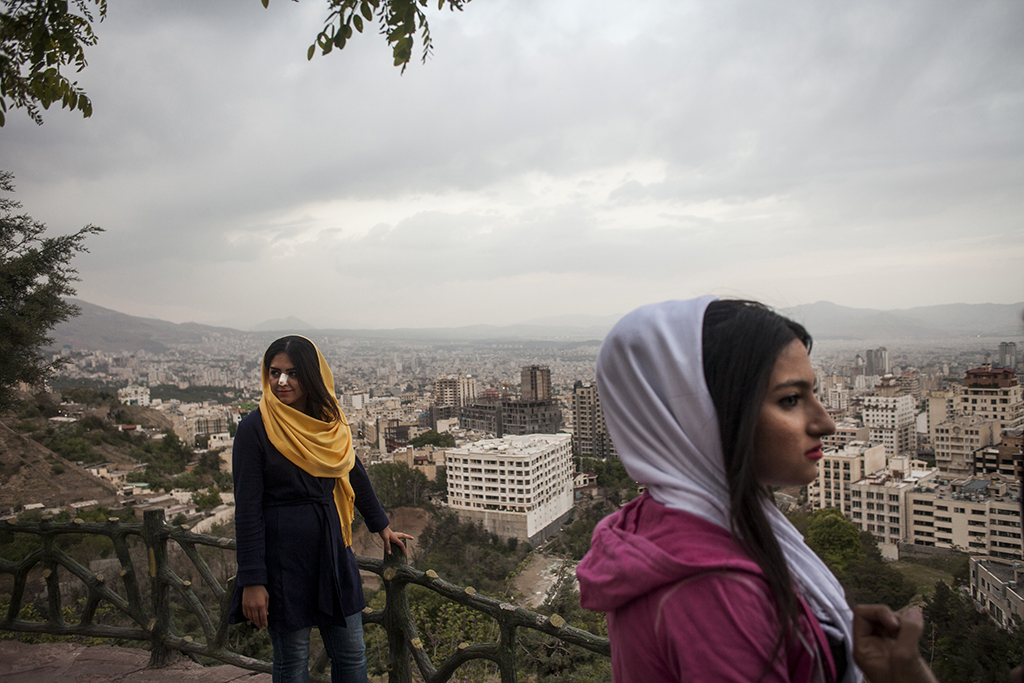 A group of young women stand on a terrace at Bam-e Tehran, the 'roof of Terhan' an area overlooking the capital. One of the young women has a dressing on her nose following plastic surgery. Iran has the highest rate of nose surgery in the world with a reported 200,000 operations taking place each year. 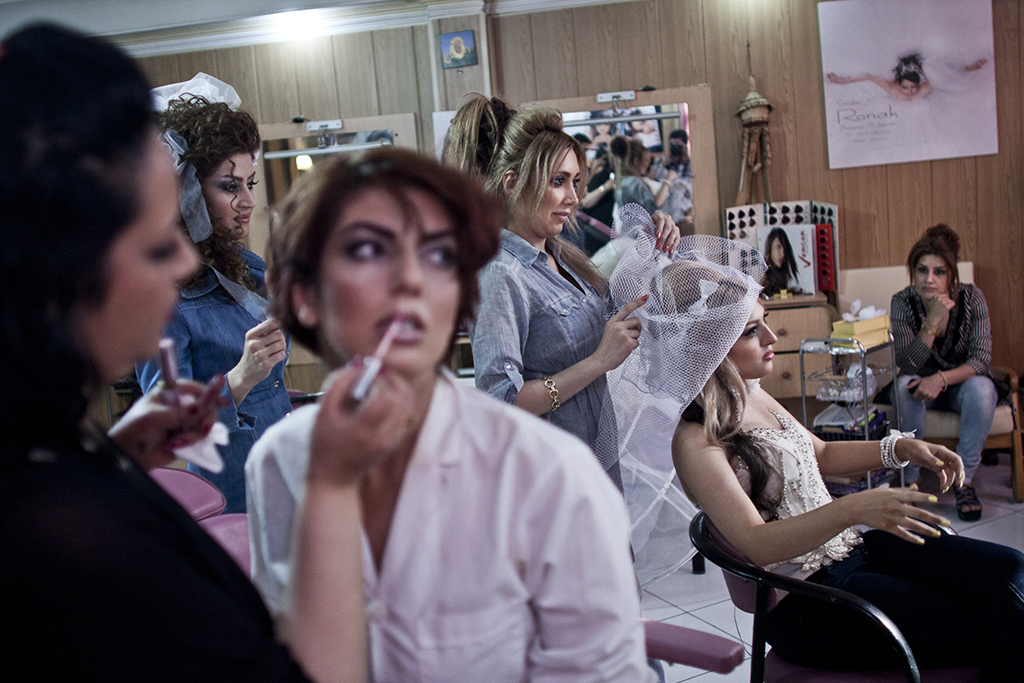 Women being made-up in a beauty salon, where it is illegal for men to enter or do a woman's make-up. 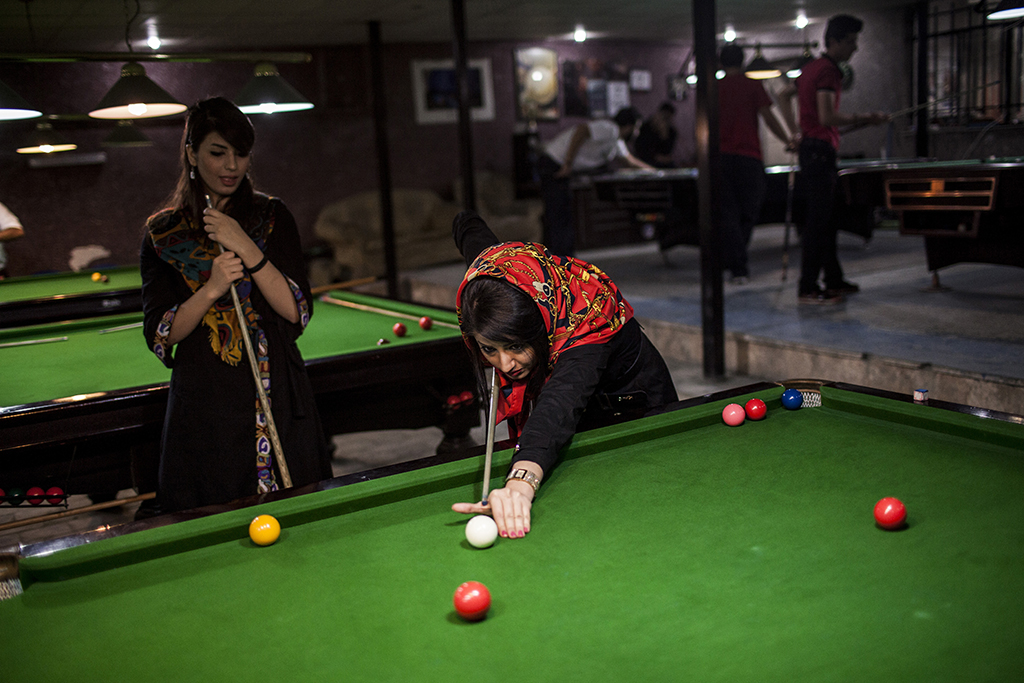 Women play pool in a men’s gym, where women are forbidden to enter. 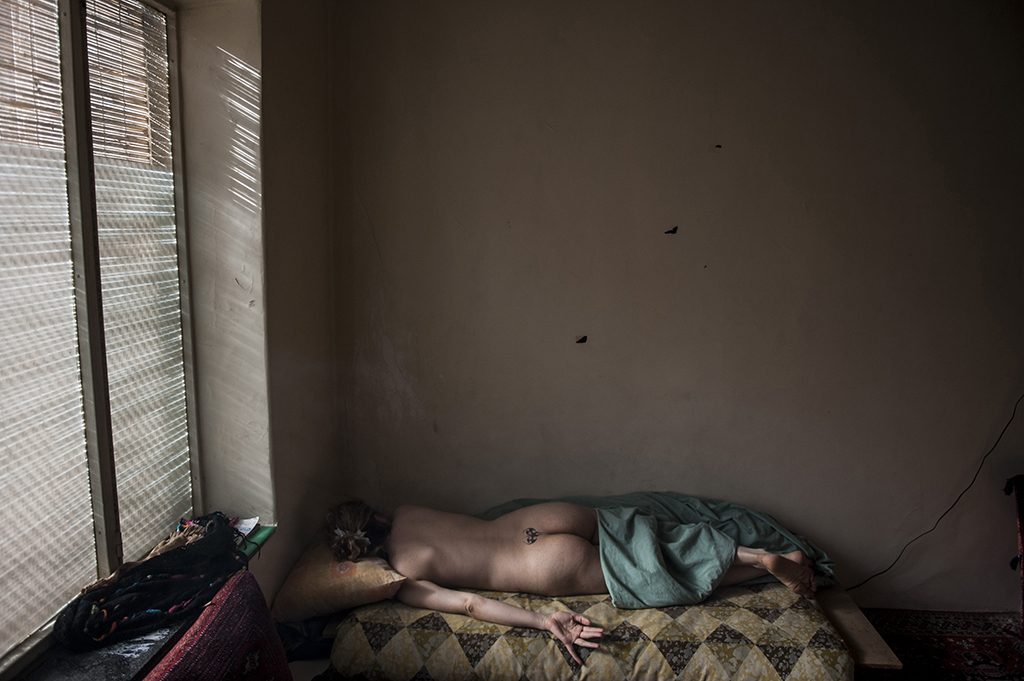 A naked woman, with a tattoo at the base of her spine, lies on a bed. The woman is a prostitute working to pay for the cost of raising her two children 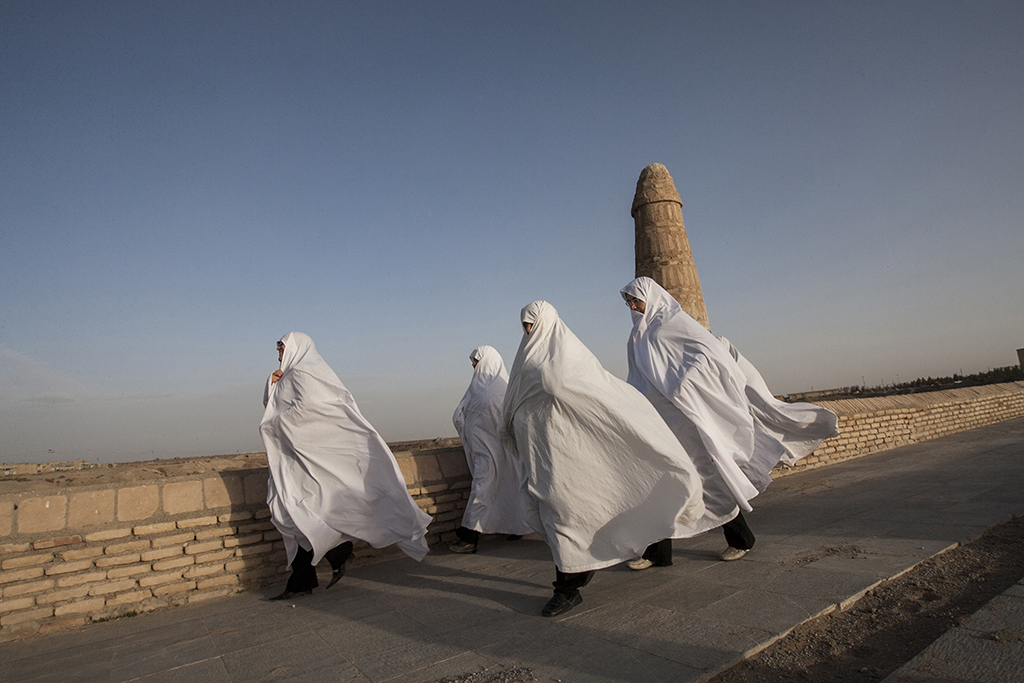 A group of women, dressed in white chadors, crossing the Varzaneh Bridge. Traditionally, in the region, white is worn to ward off evil. 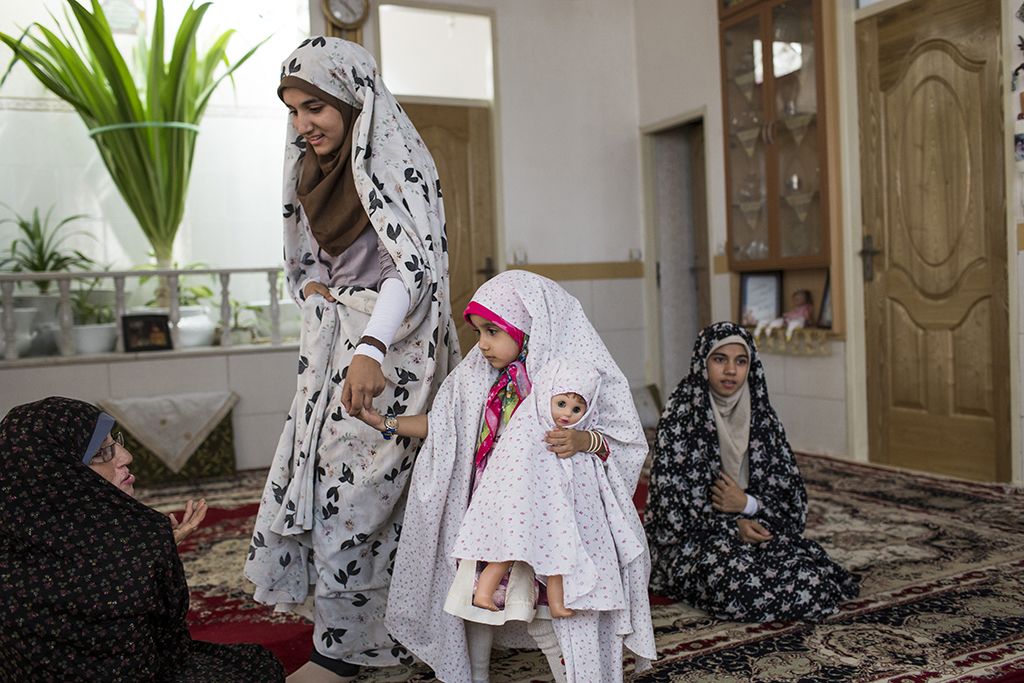 The female members of a family at their home where even the youngest girl wears a chador. 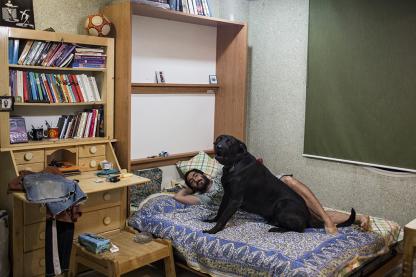 Shervin is in his bedroom with his dog. In Iran, because of Islamic rules about dogs being considered a dirty animal, people are not allowed to keep dogs. Most people who have dogs, keep them in their houses as the police are likely to take them if they walk them in public. 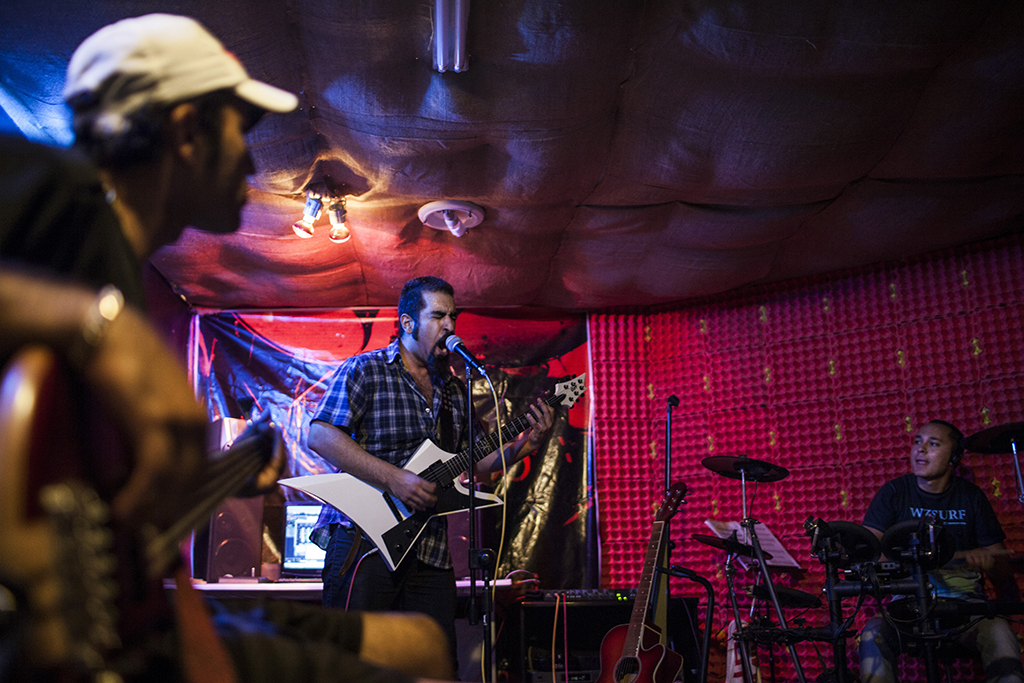 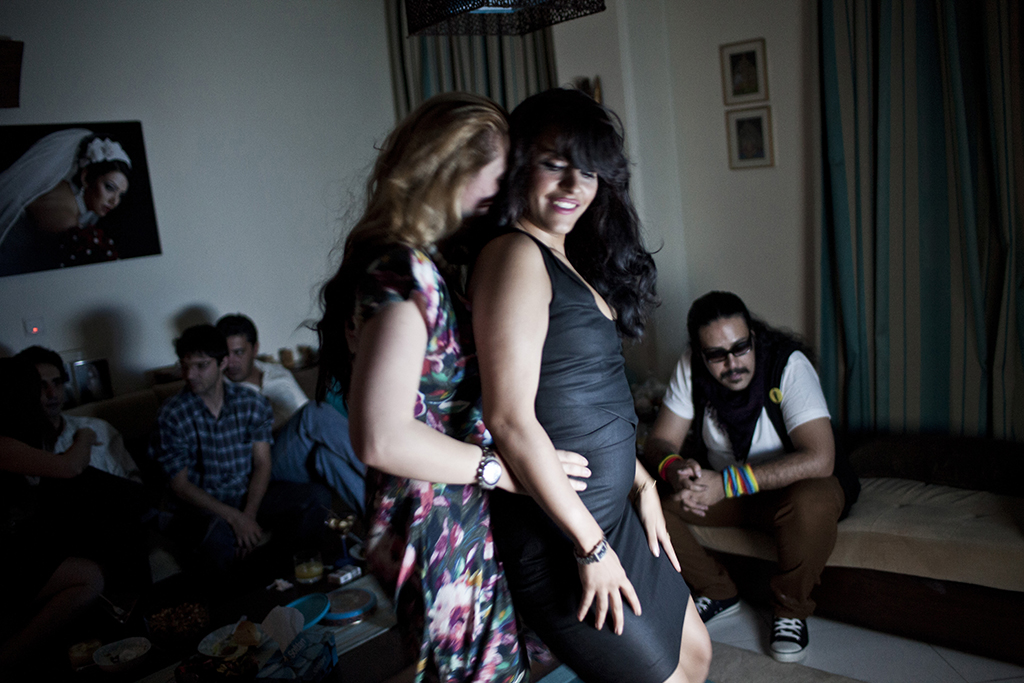 Two young women, having enjoyed a drink at a party, dance together. Although unrelated men and women are forbidden to socialize together many people ignore these strictures in the privacy of their own homes. 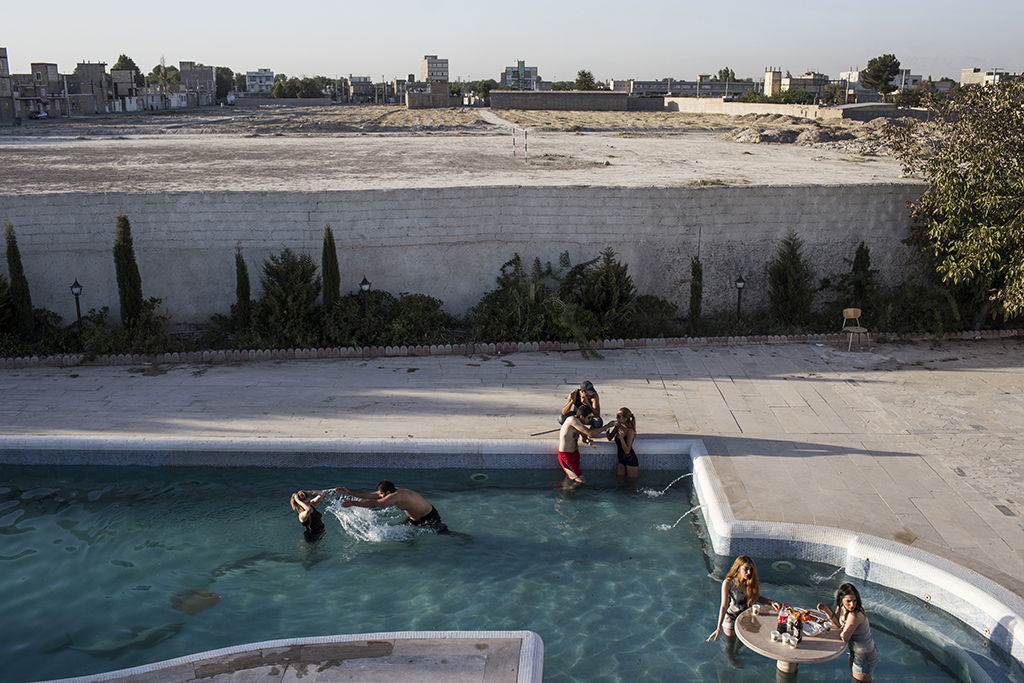 A group of young men and women play, eat, and hang out in a swimming pool. 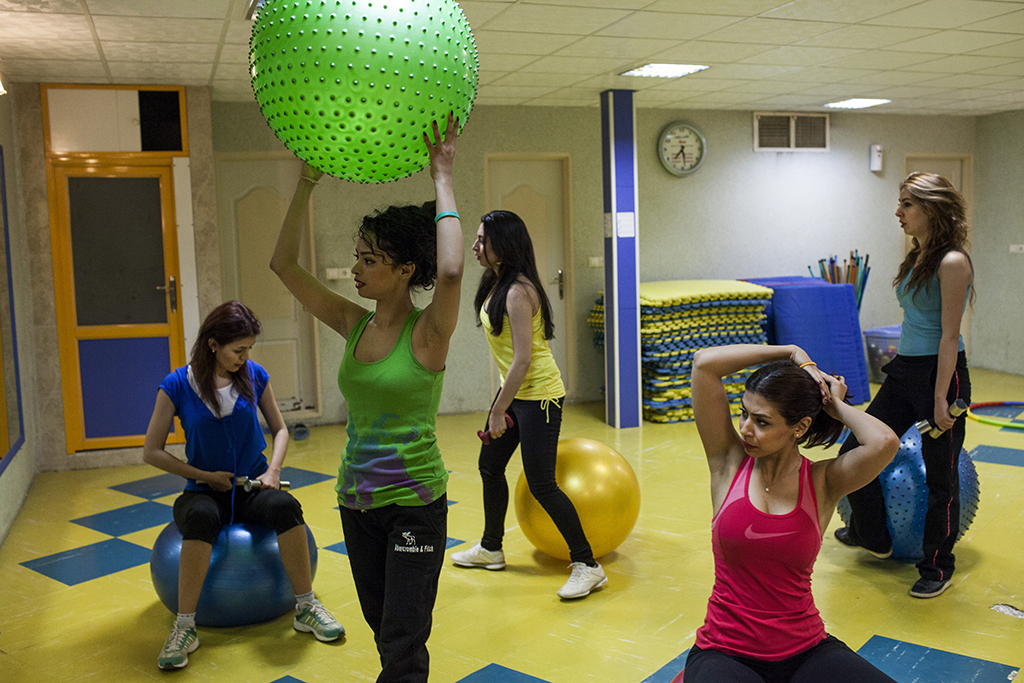 Women exercise in a gym. 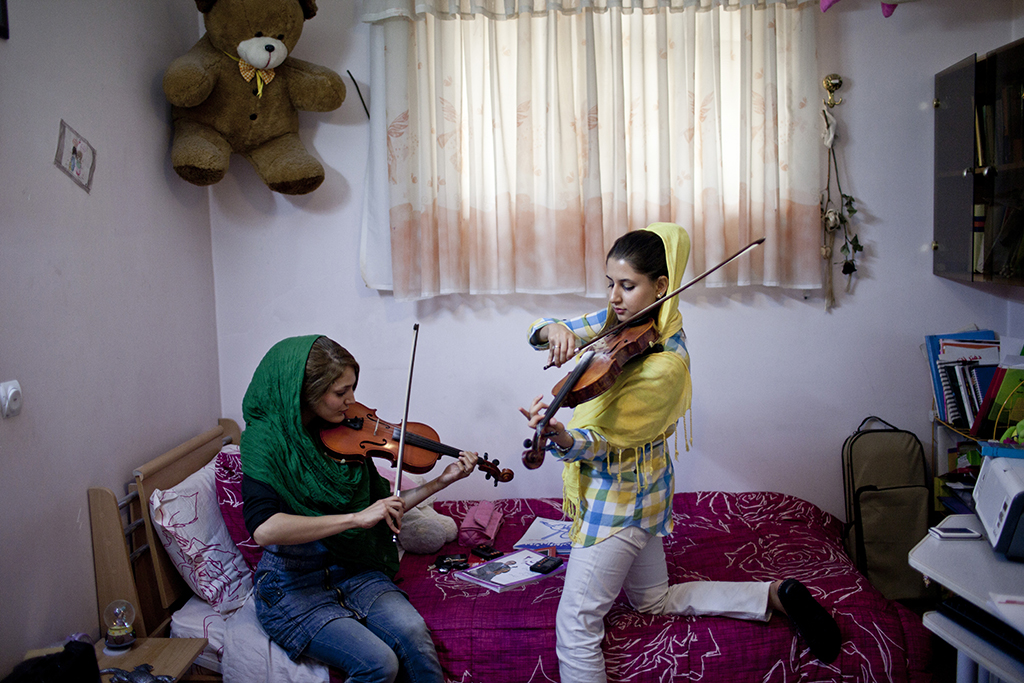