Jan Grarup - Somalia in TransitionThe state of Somalia, born in 1960, when British Somaliland and what had formerly been Italian Somaliland united and declared independence,But for the past 22 years, this east African state has been one of the world’s most troubled countries. Chaos and violence have reigned since civil war broke out in 1991, and several famines in the past decade have caused hundreds of thousands to flee.In 2006, the Islamic Courts Union (ICU) took control of much of central and southern Somalia, imposing a strict interpretation of sharia law over the areas it ruled. The embattled Transitional Federal Government (TFG) was relegated to control over only a small part of Mogadishu, the capital. In 2011, a severe drought exacerbated by ongoing civil strife caused thousands to flee to neighbouring Ethiopia and Kenya and pushed many Somalis to the brink of starvation.Over the last years, Somalia have had a new, less-corrupt government and parliament, however corruption is still widespread and former warlords are positioning themselves to regain power and control over area of the country. At the same time the government is - together with African union forces, fighting the still present Al Shabaab militias, even though they lost control in the country. Insurgents are still killing journalists, politicians and people fighting for the principles of democracy. Car bombs and suicide bombers are still frequently happening in Mogadishu as well as attacks on AMISOM (African Union Forces in Somalia) forces.In the middle of the chaos are the Somali civilian population who are struggling to survive and navigate thru the still very chaotic state. Many civilians have fled to massive refugee camps like Dadaab in Kenya and in the border region in Ethiopia. Others live as internally displaced refugees in camps within Mogadishu and other major cities in the country - Most of still hoping for a peaceful future and the possibility to return to their villages... 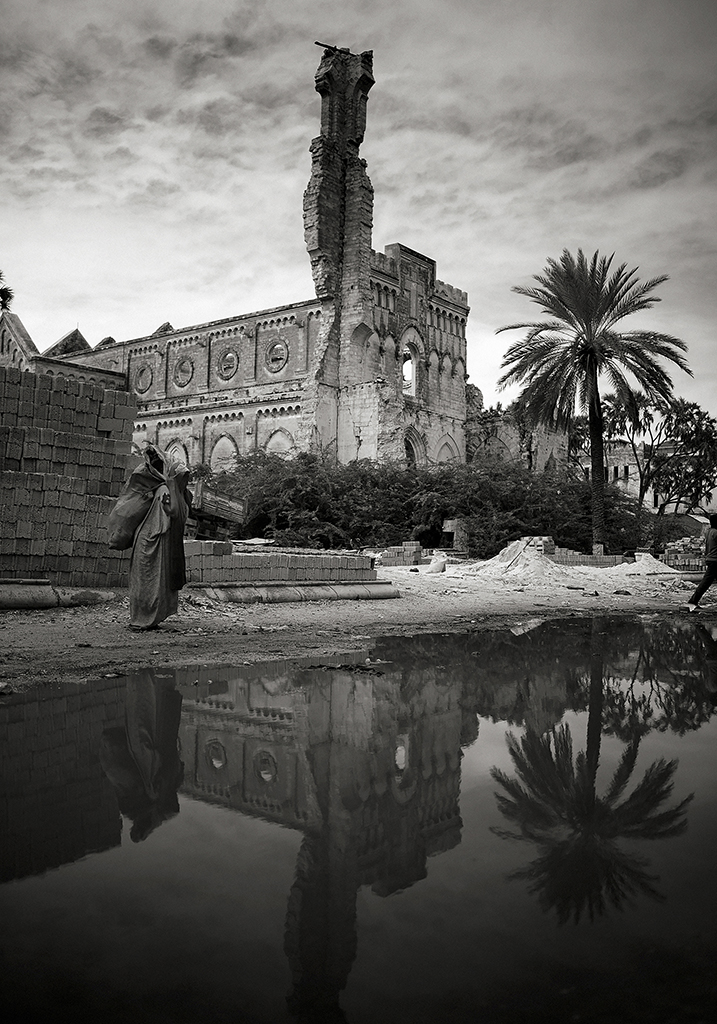 The Cathedral in the center of the Somali capital Mogadishu. 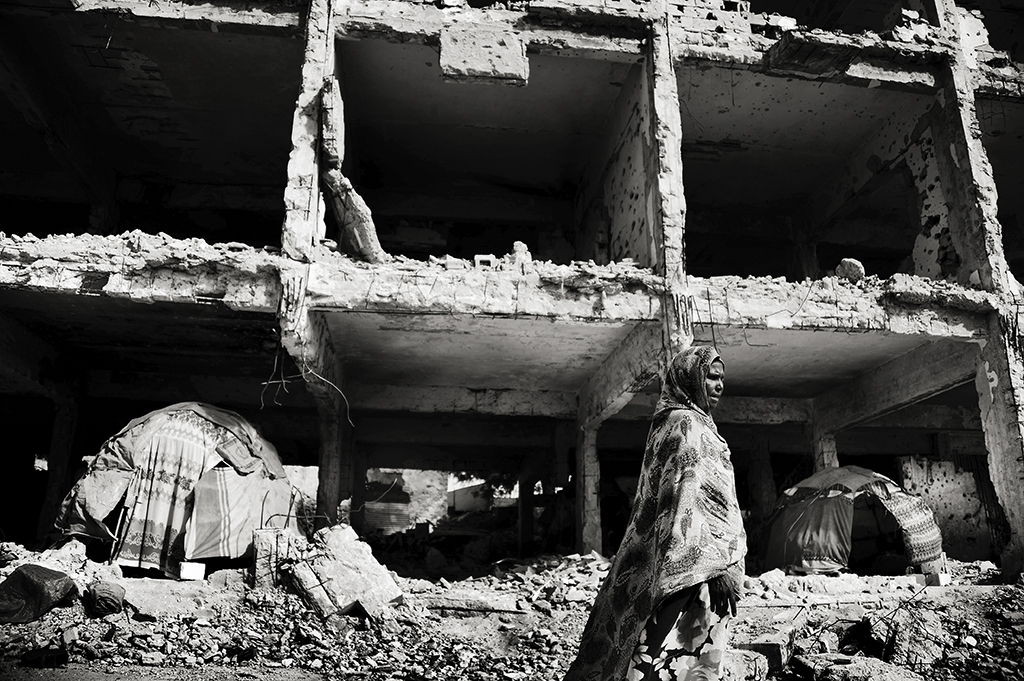 Refugees living in the ruin of the war torn city, Mogadishu. Many refugees live sporadically in the city while others live in some of the many IDP camps which are scattered all over the city. More than 200.000 refugees are believed to live in the city.The Horn of Africa is facing a severe crisis due to the convergent effects of the worst droughts in decades and the persistent effects of armed conflict in Somalia. These factors combined to trigger one of the sharpest refugee outflows in a decade to Kenya and Ethiopia. Over ten million people are at high risk including 2.85 million people in Somalia, 3.2 million in Ethiopia and 3.5 million in Kenya. Despite access and security limitations, UNICEF is working with local partners in Somalia to bring much-needed relief to over 200,000 people newly displaced by the recent upsurge in conflict in the capital, Mogadishu.For hundreds of thousands of displaced Somali children, daily life is a mixture of fear and insecurity. Communities break apart, as one by one families leave their villages to flee ongoing conflict. If they survive the journey to Mogadishu, life is not much easier, as they are faced with the daily challenge of finding food and shelter. For children, this experience can be traumatizing. Having fled their homes in search of safety, they find themselves in overcrowded camps, away from all they know. While most children arrive in the displaced camps with their families, some are tragically separated from their parents and are either left to fend for themselves or forced to rely on already overburdened community members. Each Child Friendly Space has facilitators from UNICEFO’s NGO partners who work with the children. Several of the partners also have social workers to help identify and refer children in need of care and protection to the appropriate services. 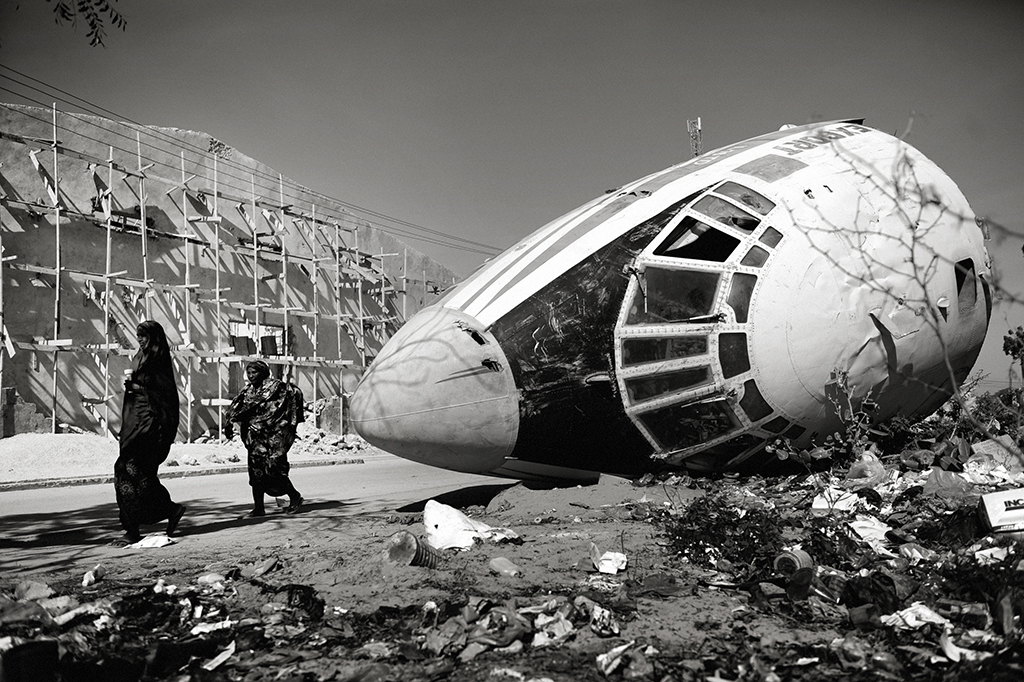 Close to the Mogadishu airport an old Russian Ilyshin IL76 cargo plane lies scattered in the street, while a small school on the other side of the road is being rebuilt. The plane crashed when it was hit by Al-Shabaab antiaircraft fire. Eleven people died in the crash. 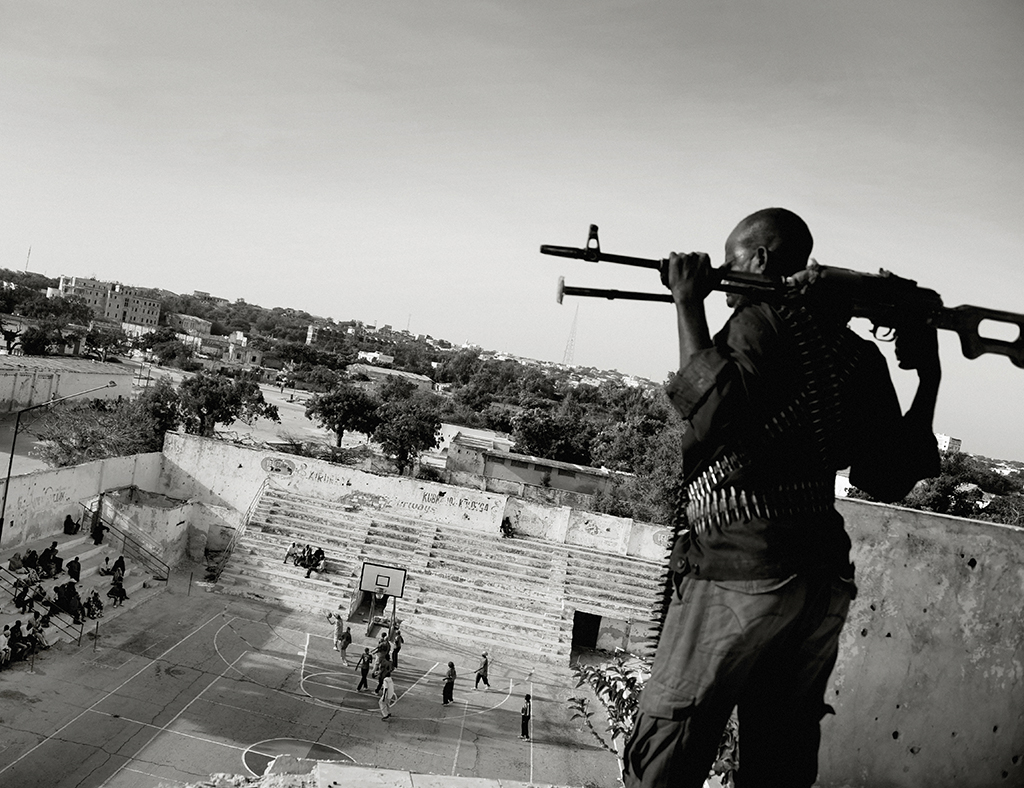 Death or Play. Women's basketball in Mogadishu. Women's basketball? In Europe and the U.S., we take it for granted. But consider this: In Mogadishu, war-torn capital of Somalia, young women risk their lives every time they show up to play. Suweys, the captain of the Somali women's basketball team and her friends play the sport of the deadly enemy, called America. This is why they are on the hit list of the killer commandos of Al Shabaab, a militant Islamist group, that has recently formed an alliance with the terrorist group Al Qaeda and control large swathes of Somalia. Al Shabaab, who sets bombs under market stands, blows up cinemas, and stones women, has declared the female basketball players 'un-islamic'. One of the proposed punishments is to saw off their right hands and left feet. Or simply shoot them. Suweys' team trains behind bullet-ridden walls, in the ruins of the failed city of Mogadishu protected by heavily armed gunmen. The women live in constant fear of the Islamist killer commandos. Stop playing basketball? Never, they say. Women's basketball in the world's most dangerous capital. 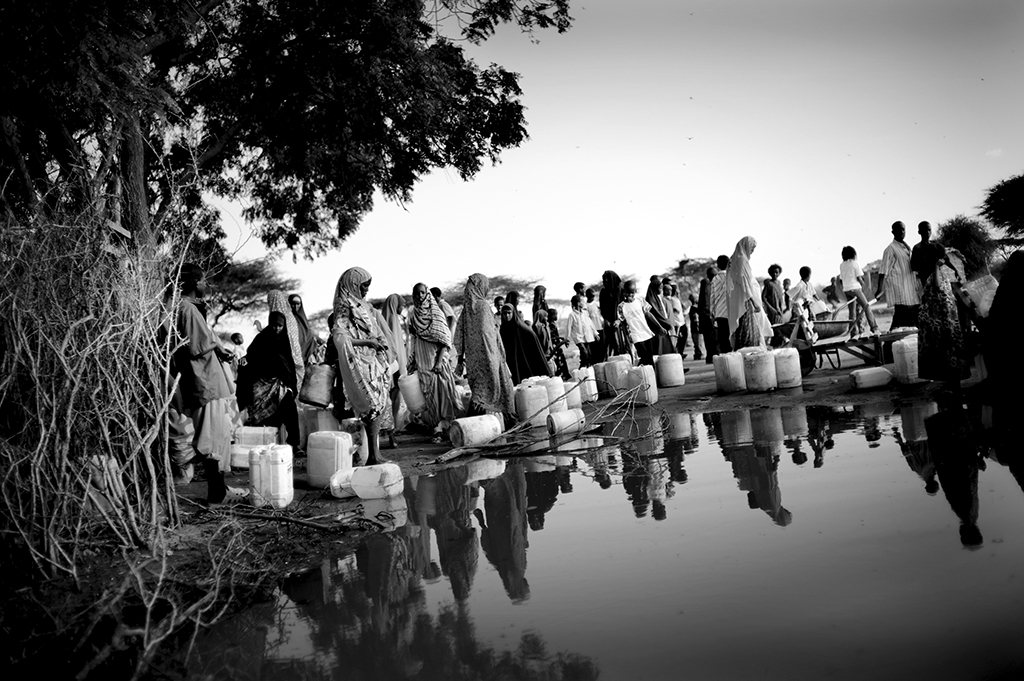 Dadaab refugee camp - 90 kilometers from the Somali border. The world biggest refugee camp with approximately 300,000 people living there. Due to heavy rain, big areas of the Dadaab refugee camp is flooded, contaminating the drinking water. More rain is expected. The contaminated standing water creates perfect conditions for malaria mosquitoes and the increase of Malaria cases is already evident. 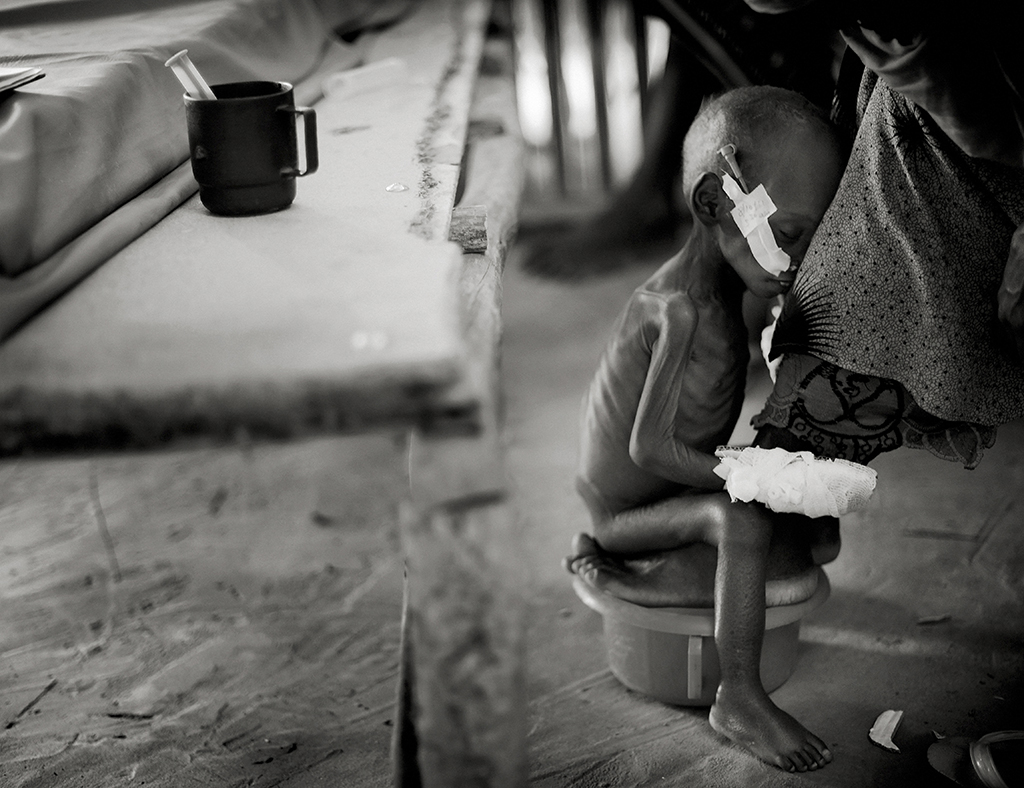 A small severely malnourished boy has just arrived in the medical facility in the "Hilowen" camp with his concerned mother. Only fast and intensive care of the boy can save his life. At the age of three and a half his weight is lower than a that of a healthy one year old. 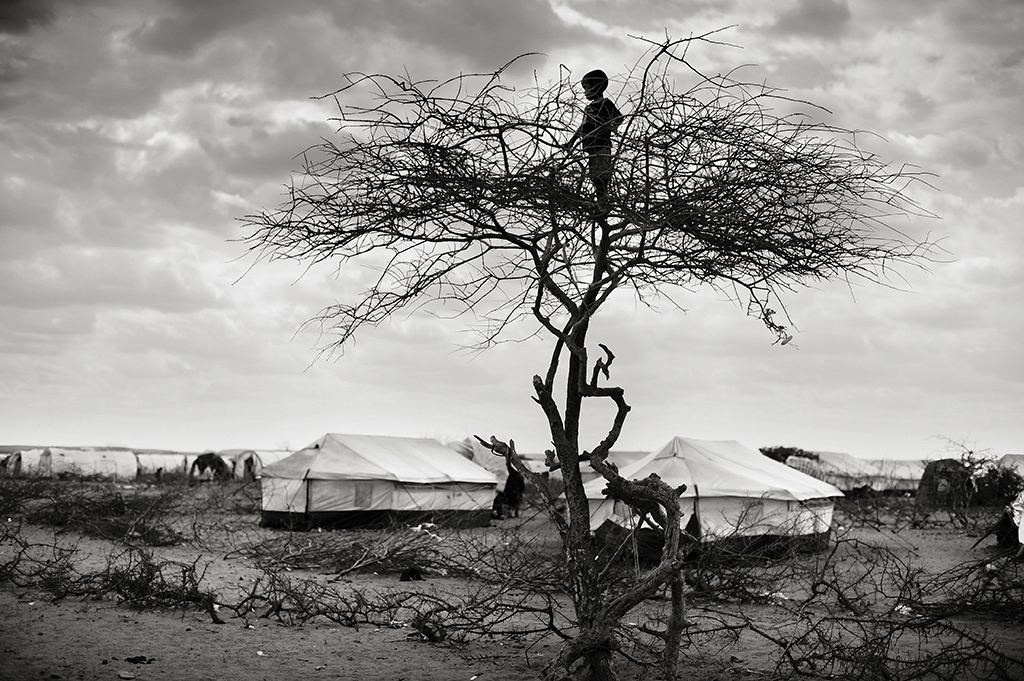 Dollo Ado, Ethiopia. In the refugee camp " Hilaweyn," also called "Hells Wind," a small boy overlooks the massive camp which has grown to more than 40.000 refugees. Refugees are still arriving in large numbers and relief organizations have started to build a fifth camp in the area. Save the Children is working in all the camps, trying to improve the daily life for the many children there.The drought in the horn of Africa is affecting more than 4.5 million people in Ethiopia. In addition, more than 140.000 refugees from Somalia have settled in camps in the border region between Somalia and Ethiopia. In the area around the border city Dollo Ado, four large refugee camps are already overcrowded. Many of the refugees are children, arriving severely malnourished. The mortality rate among small children has been brought down, but still children are dying on a daily basis. The four camps: Hilaweyn, Kobe, Malkadida and Bokomayo are now hosting more than 120.000 refugees and more are coming daily. 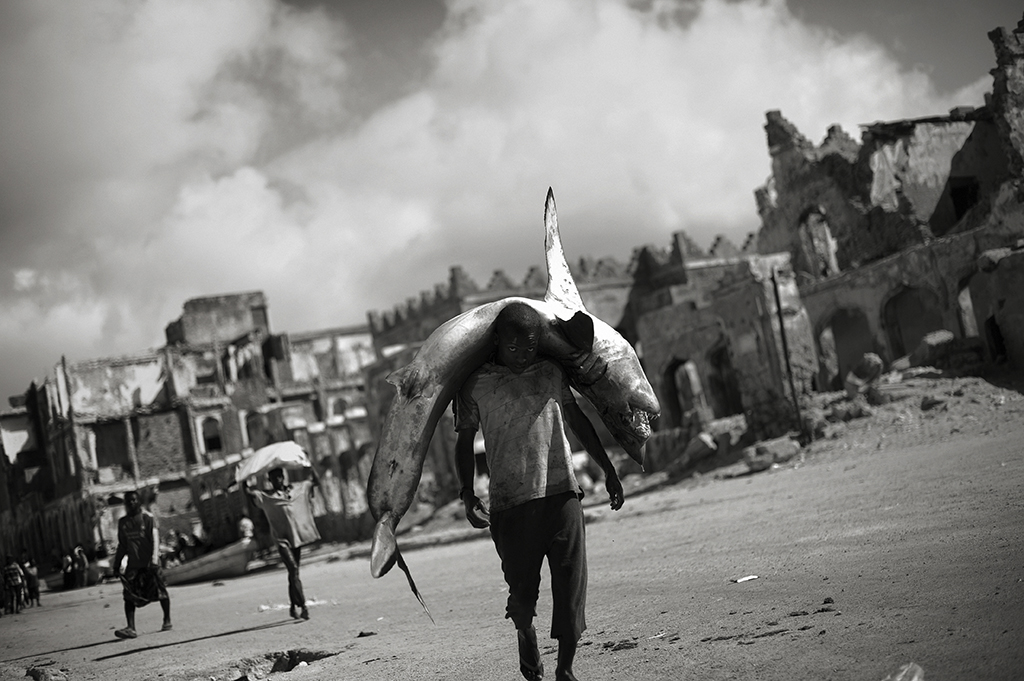 A young man carries a shark to the city's fish market to be cleaned and sold after a morning fishing trip. With piracy a growing issue on the seas, no Western fisherman risk entering the surrounding Indian Ocean, leaving it abundant with sharks and other sea creatures. Mogadishu. 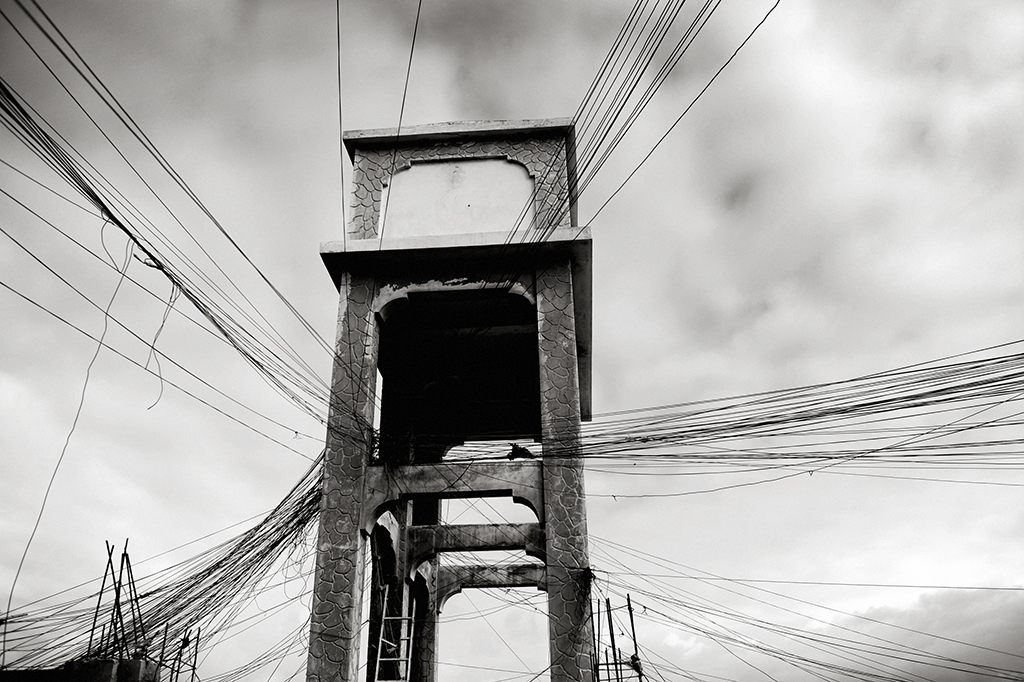 Power lines in the center of Mogadishu. After the famine struck the country in 2011, more than 400.000 people fled to the capital for aid and security. Still more than 340.000 internally displace people (IDP) live in the ruins and in makeshift camps around the city. Only a few of them receive aid from the relief agency. 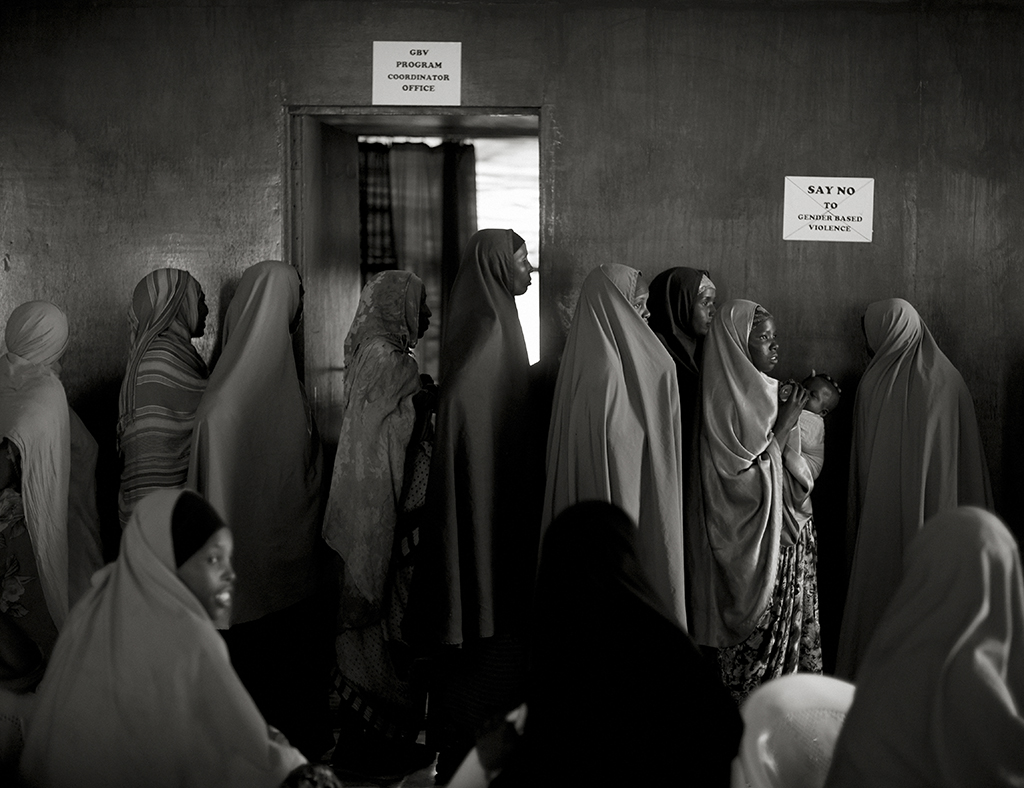 Local women meeting in a center that offers support to some of the many women living in the IDP camps that have suffered sexual violence. 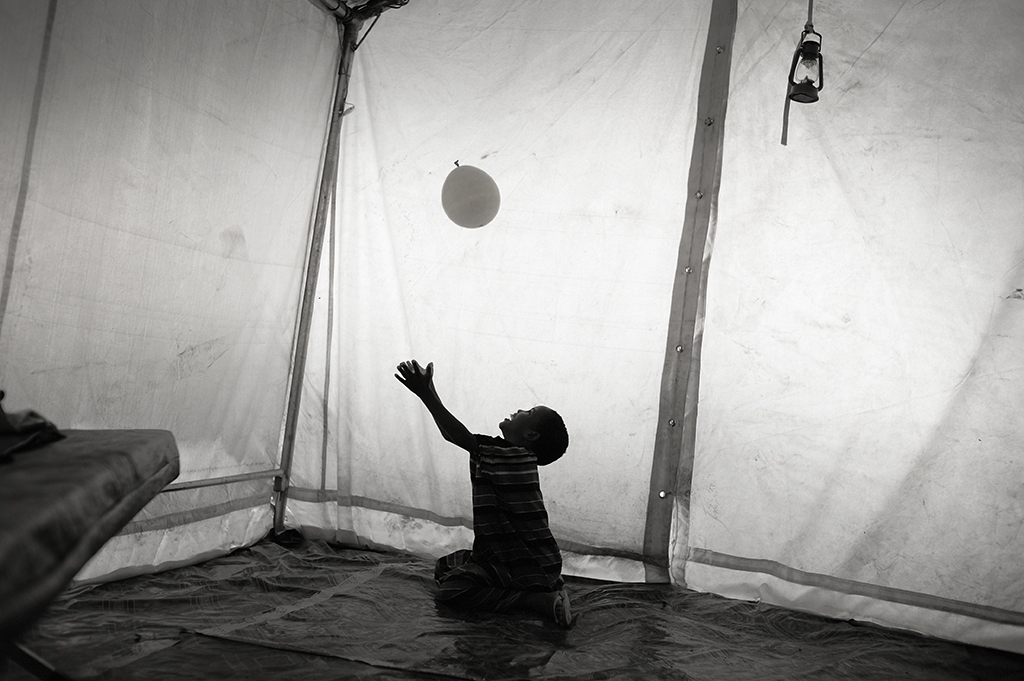 A small mentally ill boy plays with a balloon in his tent at the Hospital in "Hilaweyn" refugee camp. Due to severe malnutrition many children arrive sick, mentally as well as physically, and are in need of special care from the medical staff. Dollo Ado, Ethiopia.