Paula Bronstein - Afghanistan: Between Life and WarFrom my very first visit, in late 2001, I was drawn to Afghanistan’s astounding landscape along with the Afghan’s inner strength to survive and a story that was both compelling and challenging. I returned often for the on-going news coverage but found myself more absorbed with the human condition, and the diversity of  daily life. As a result, these images here are a “slice of life” of Afghanistan, looking at the worn-torn country starting in late 2001 to present day. Now in its 10th year, the war in Afghanistan, which began as a violent retaliation after the 9/11 terrorist attacks, has escalated into a war with a growing price tag of both money and lives with no clear end in sight. As we see the death toll increasing by the day, the numbers of the war wounded continue to skyrocket with the war costing an average of roughly $5.7 billion per month. While governments and aid organizations do their best to improve the lives of ordinary Afghan people, the last few years has seen an increase of violence and instability as the Taliban continue to show they can successfully carry out brazen attacks in various parts of the country. Afghanistan still remains the world's largest producers of opium, which is refined into heroin for sale in many parts of the world. The fight against the narcotics economy is a slow and arduous process. Afghanistan’s annual opium harvest is worth up to $3 billion. Profits from heroin fund the Taliban, along with corrupt Afghan officials. Afghan women maintain a classic subordinate position in a world where conservative Islamic traditions dictate what a female is allowed to do in a male dominated world. More than 87 percent of Afghan women suffer from domestic abuse according to the UN, and between 60 and 80 percent of marriages are forced.  Women also deal with incredible hardships due to war, poverty and tribalism. For women, the dangers of the war go far beyond the violence of combat.  The killing of Osama Bin Laden and other Al Qaeda leaders is unlikely to end the war or stem the violence in Afghanistan. It looks as though the people of Afghanistan will continue to inhabit the space between life and war for the foreseeable future. 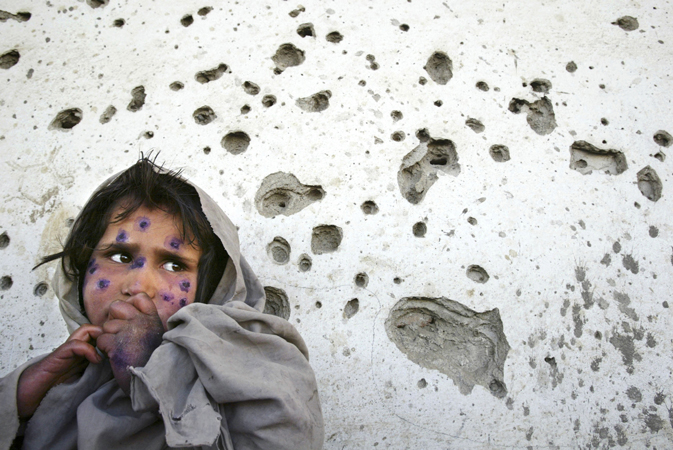 Mahboba, age 7, stands against a bullet-ridden wall waiting to be seen at a health clinic for a disfiguring skin disease called Leishmaniasis which is a parasitical bacterial infection transmitted from tiny sand fleas. 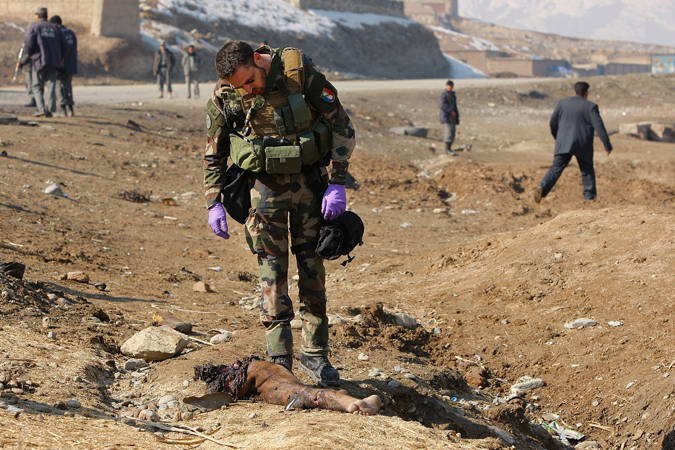 A NATO medic looks at the severed leg of a suicide bomber after an attack on a convoy of foreign troops on the outskirts of Kabul. 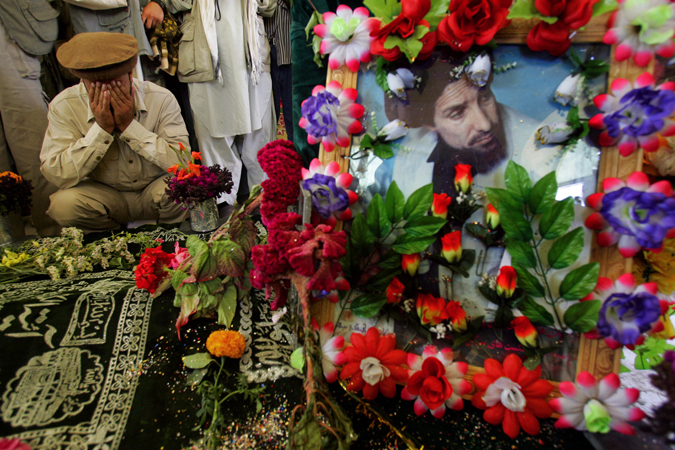 Afghans pay tribute to national hero Ahmad Shah Masood at his gravesite on the 4th anniversary of his assassination. Masood was one of the leaders of the anti-Soviet resistance and the battle against the Taliban. 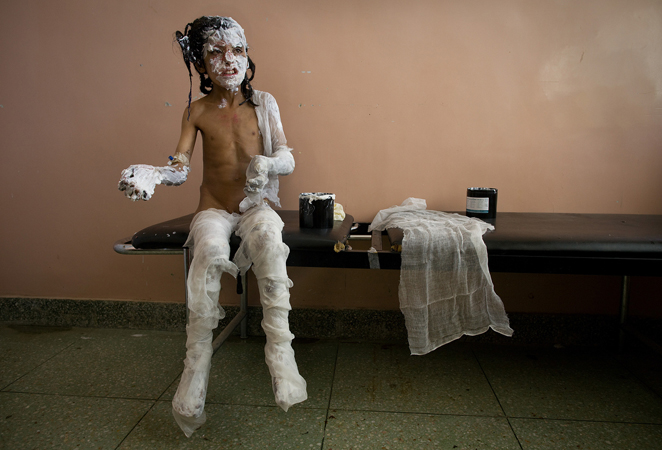 Asan Bibi, 9, sits on a bench with burn cream covering her body. She and her sister and mother were badly burned when a helicopter fired into their tent in the middle of the night. Three members of the family were killed in the incident. The family belong to the Kuchi ethnic tribe who are nomads living in tents out in the open desert and are very vulnerable to a war of which they have little understanding. 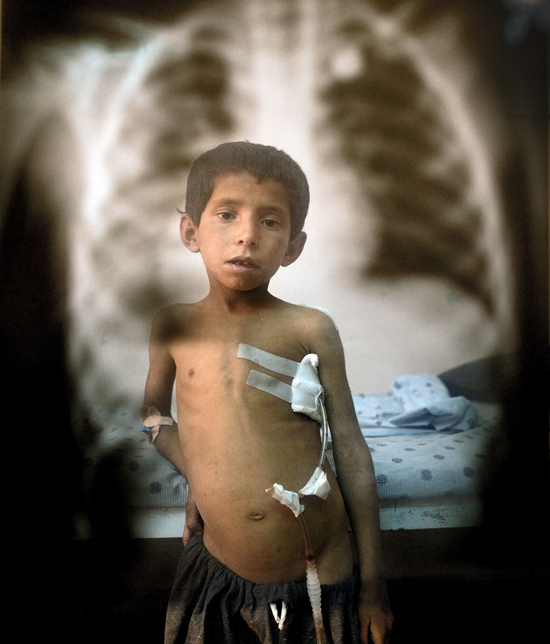 Attiullah, 7, is standing by his bed at Mirwais hospital in Kandahar, in front of an x-ray of the bullet that entered his back and coming out through his chest. The small boy was shot by U.S forces as he was walking in the field near his home in the village of Sangissar watching the family's flock of sheep. The soldiers apparently shot at a vehicle that was supposedly Taliban and the boy got hit in the cross fire. 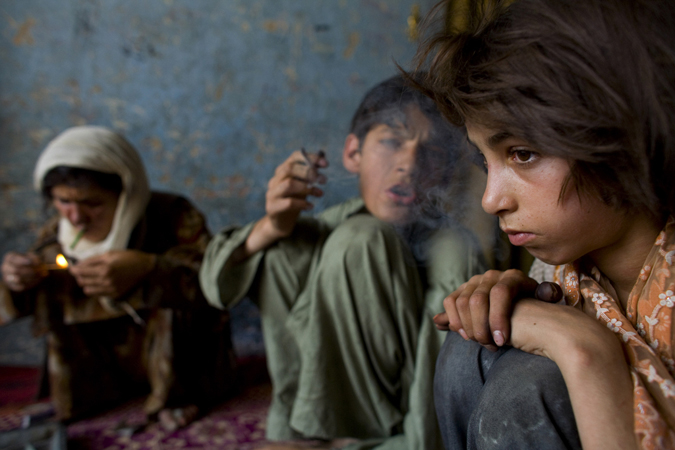 Zaher, 14, smokes heroin along side his mother and sister, Gulparai, 11, in Kabul, Afghanistan. The children began smoking at a very young age after watching their mother Sabera, who is a widow and a heroin addict for 4 years. 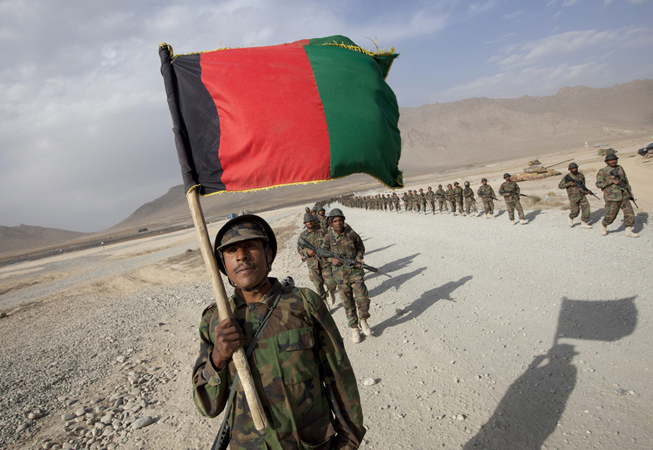 An Afghan National Army (ANA) battalion marches back to the barracks at the Kabul Military Training Center. There are between 5,000 to 7,000 troops at the training facility in eight week cycles trained by the coalition forces to ultimately take over the role of military operations in the country. 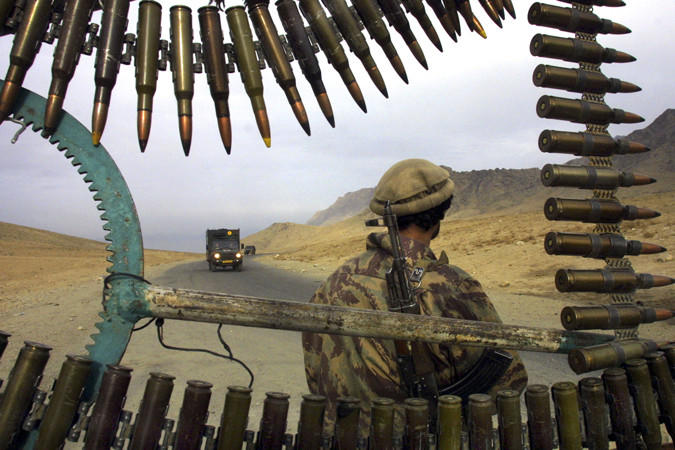 Afghan military stands guard at a checkpoint at the outskirts of Kabul. 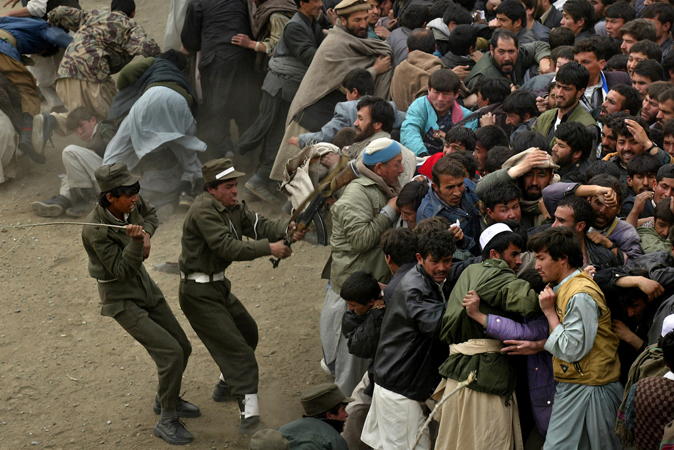 Afghan security officers try to control a massive unruly crowd of soccer fans as thousands without tickets push to get into the Olympic stadium to see the first ever soccer match between Kabul United and the ISAF (NATO forces). The stadium was once the site of public executions during Taliban rule. 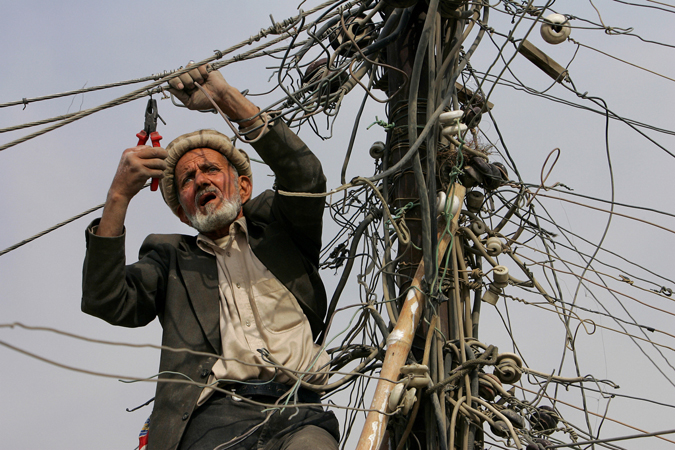 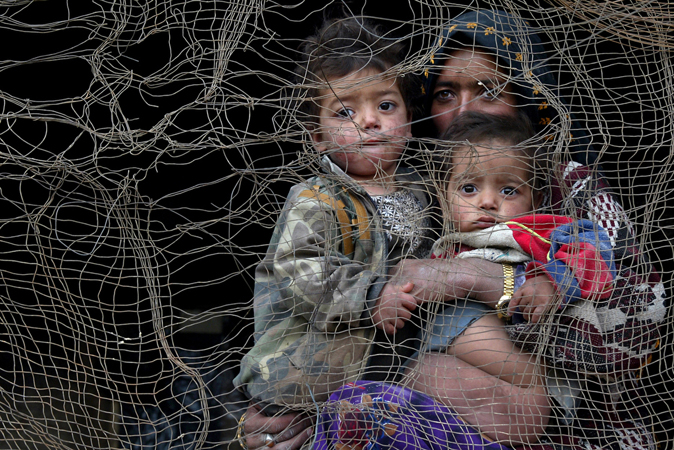 A mother and her two children look out from inside their cave dwelling. Many families took refuge inside caves that are adjacent to the destroyed ancient Buddha statues in Bamiyan. The cave dwellers have reestablished their homes inside the caves after fleeing from Taliban rule. 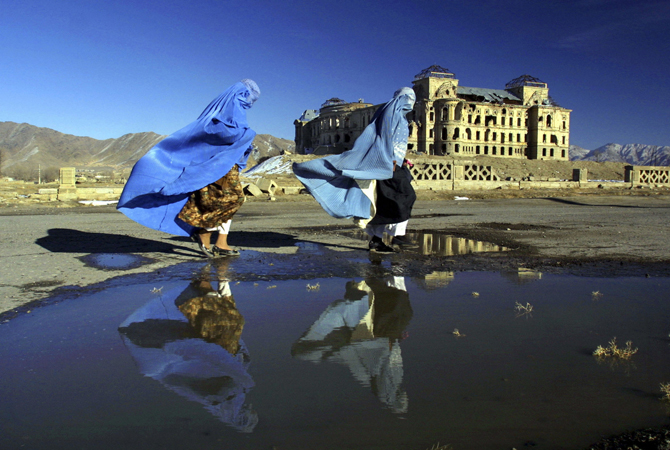 Afghan women in burqas walk in front of the Darulaman Palace in Kabul, Afghanistan on a breezy winter day. The palace lies in ruins. It once was the masterpiece of Kabul built by King Amanullah in the early 20th Centruy. 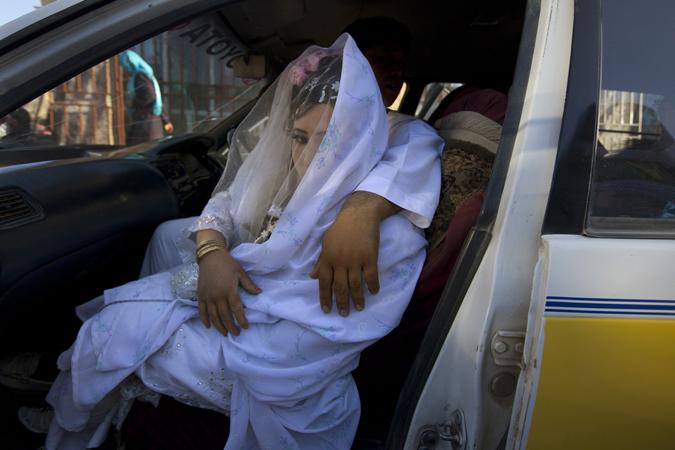 Afghan bride Zahara,24, is held by her groom Gulam Ali as they leave for their wedding ceremony. At local beauty salons, behind drawn curtains, isolated from the males, Afghan women spend hours getting ready for engagement parties and weddings. In accordance with Afghan culture the men are required to be segregated from the women with the exception of the bride and groom. 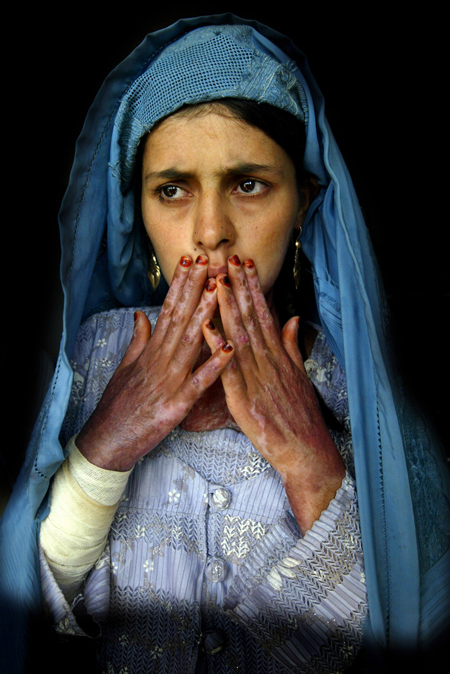 Masooma,18, has severe burns on 70% of her body from self immolation. Forced marriages, domestic violence, poverty and lack of access to education are the main reasons for suicide. 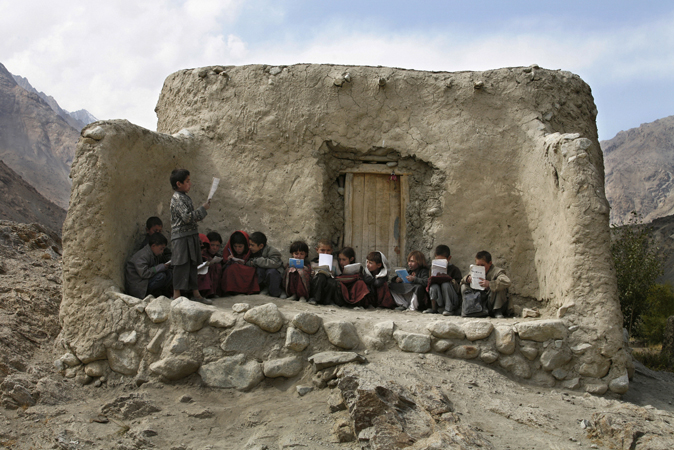 Afghan students recite prayers in a makeshift outdoor classroom in a remote mountain village in the Wakhan Corridor.