Omo Change documents the story of big investments from European and Chinese countries in the Omo Valley, in Ethiopia. The Omo Valley  is internationally recognized as a rare dry and semi-dry region with extraordinary biodiversity. It has been included in the list of UNESCO heritage sites.

The area has approximately 500,000 inhabitants who work mainly in agriculture and sheep farming. An extremely fragile area, the Omo Valley is inhabited by different ethnic groups that were able to develop an agricultural system that works on a delicate and precious balance between the survival of humans and the use of natural resources and natural forces, like the floods of the Omo River.

The construction of large dam, and foreign investments in new cotton farms and   a sugar factory, are dramatically changing both the natural environment and the local population’s daily life.

The Omo Valley embodies a deep contradiction in many investments in so called ‘development’: the valley is being turned into a pool of resources for the rest of the world but not for its own population.

Omo Change reflects on the social anthropological and economical complexity at the heart of this contradiction. Omo Change aims to be a meditation on how large-scale investments can put at risk a delicate balance between humans and their environment that has persisted for hundreds of years.  How the influx of large amounts of cash changes human behavior and upsets the traditional balance of a fragile geography. 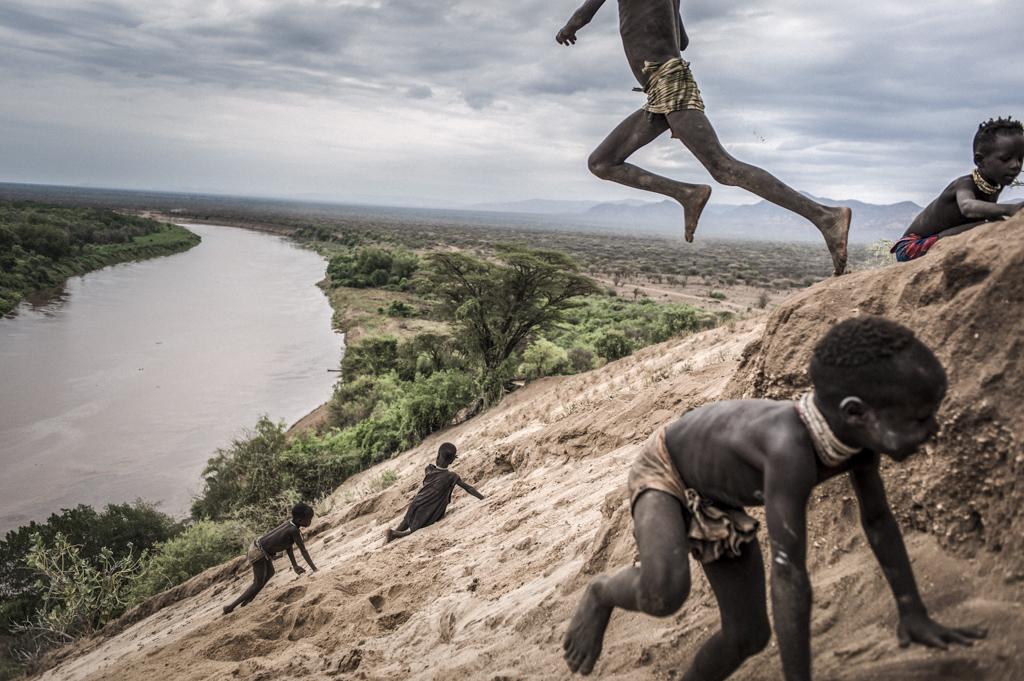 Children are playing on a sand bank jumping in the sand along the eastern shore of the Omo River near a Karo village. The Karo village is located in a natural bights of the Omo River. Karos are a small tribe with an estimated population between 1,000 and 3,000 people and lives thanks to fishing and cultivation made possible by the flooding of the Omo River. Currently, the river forest seen in the background has been demolished and replaced by an extensive cotton plantation of a foreign private company. Following the construction and commissioning of the Gibe III dam, the flooding of the Omo River has stopped, depriving the Karo population of the possibility of cultivating those products that today they’re forced to buy at the market. Omo Valley, South Ethiopia, 2011 Foto: Fausto Podavini 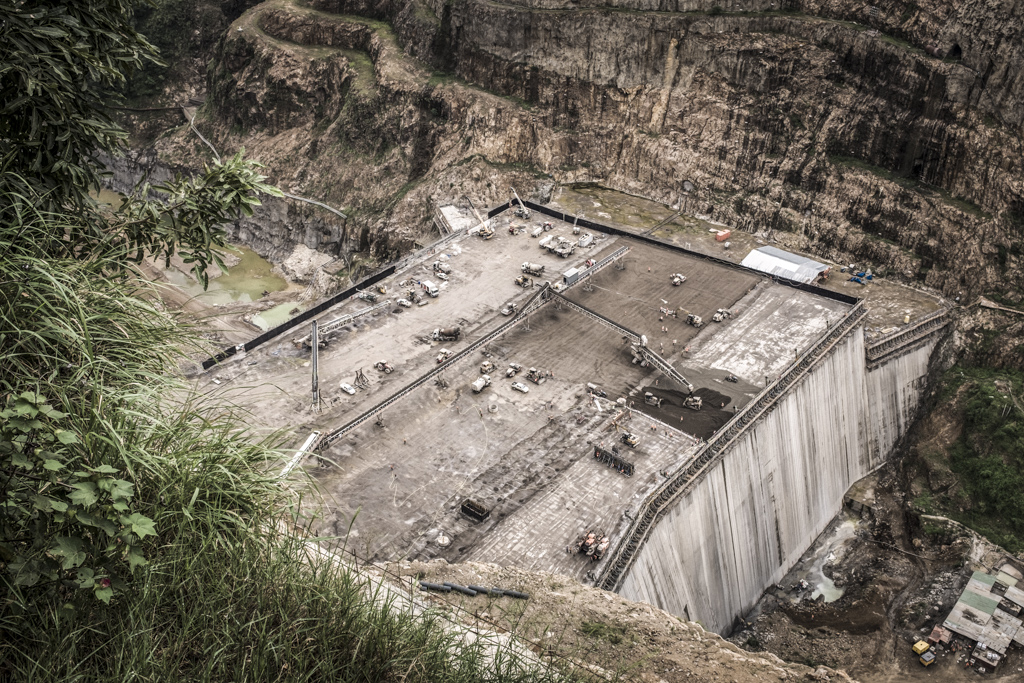 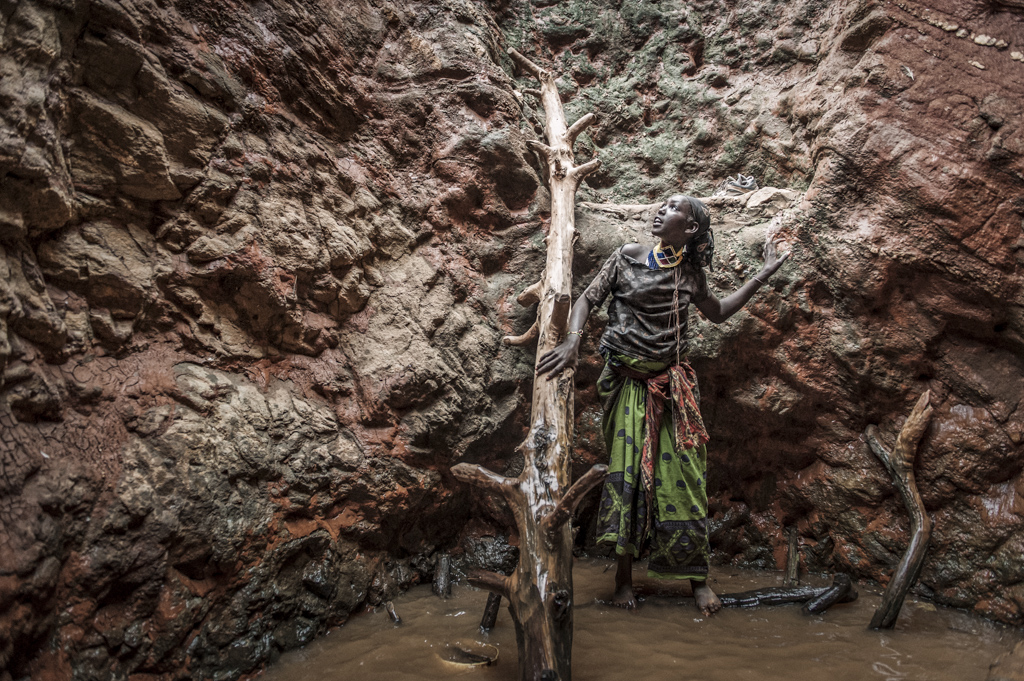 A Borana woman inside a well is getting water for her animals. In this extremely dry area, in the dry season, water is taken from 20 meter deep wells, where the aquifer is located. The appropriation of land by the Government for the construction of sugar cane plantations, is resizing the geographical borders of the tribes of the Omo Valley. The tribes are forced to migrate to other areas, and to change their customs and lifestyles. South Ethiopia, 2013 Foto: Fausto Podavini 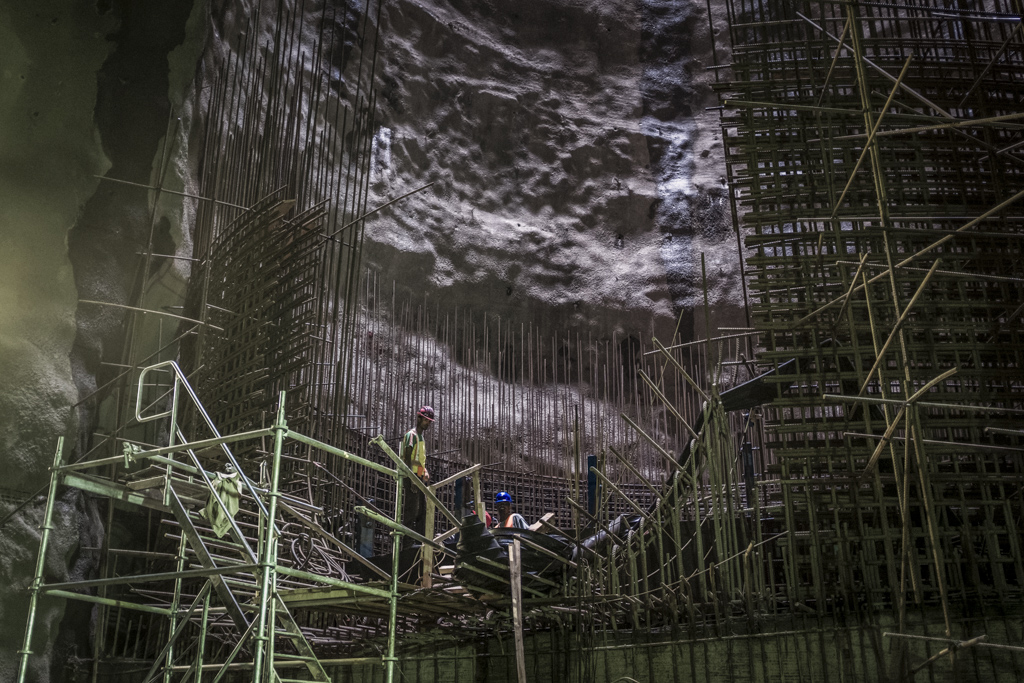 Ethiopian workers are working on the construction of one of the twin adduction tunnels of the Gibe III dam. The work on Gibe III started in 2006. In a 2009, document written by MID International Consulting Engineers, in the chapter of the positive benefits and impacts of Gibe III, reads, “There are no ethnic minorities or tribal people whose traditional lifestyles could become compromised through the development of the proposed Gibe III dam and the creation of the reservoir. Therefore, no indigenous development plan will be required.”  Loma Ethiopia, 2013 Foto: Fausto Podavini 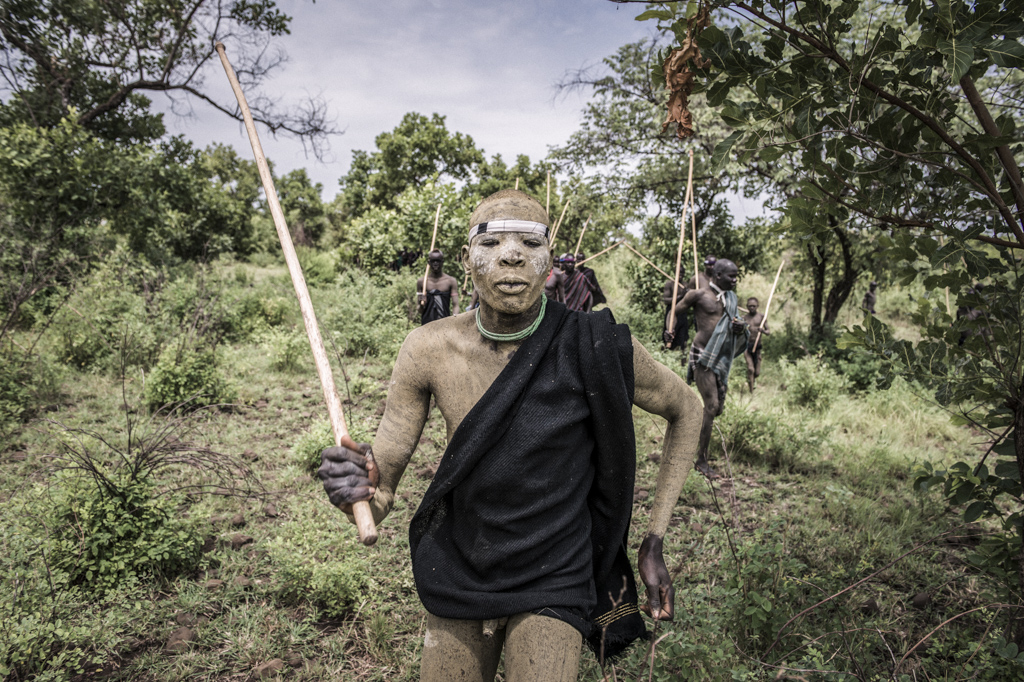 Near a village of the Mursi ethnicity. A man from the Mursi ethnic group prepares for the Dunga, a typical tribal rite among the Mursi. The Dunga is stick fighting between people of different villages, and is practiced in order to assert the supremacy of one village over the other. Historically these tribal rituals of local ethnic groups marked times of the year or special events (weddings, coming of age, propitiatory rites) but, today, almost all have become shows for tourists willing to pay just to see fake tribal rituals. South Ethiopia, 2016 Foto: Fausto Podavini 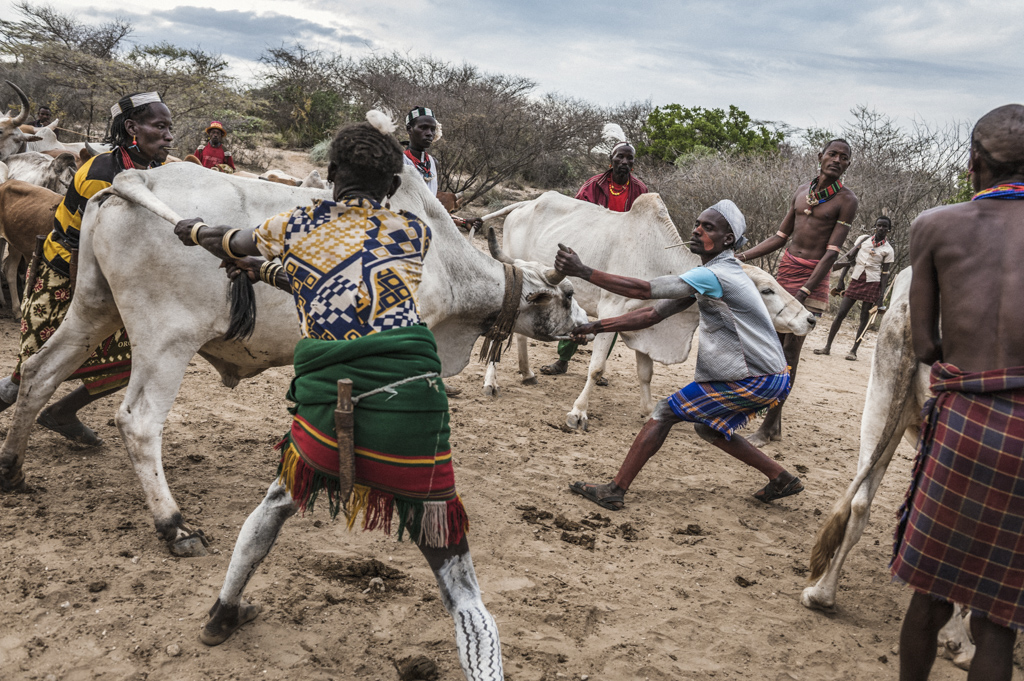 Some men from the Hamer ethnic group take their cattle to pasture in the dry river bed during the dry season. Hamer mainly live off of sheep farming and their territory is next to the territory of the Karo. At the moment the borders are being redone due to the lands being taken by the Government for their sugar cane industry development project. It is known that the land was sold at a price between 0.50 and 1.00 US dollar per hectare, with leases valid from 50 to 100 years. Recently, Survival International has reported serious human rights violations in Ethiopia due to land-grabbing. Near Turni, South Ethiopia, 2012 Foto: Fausto Podavini 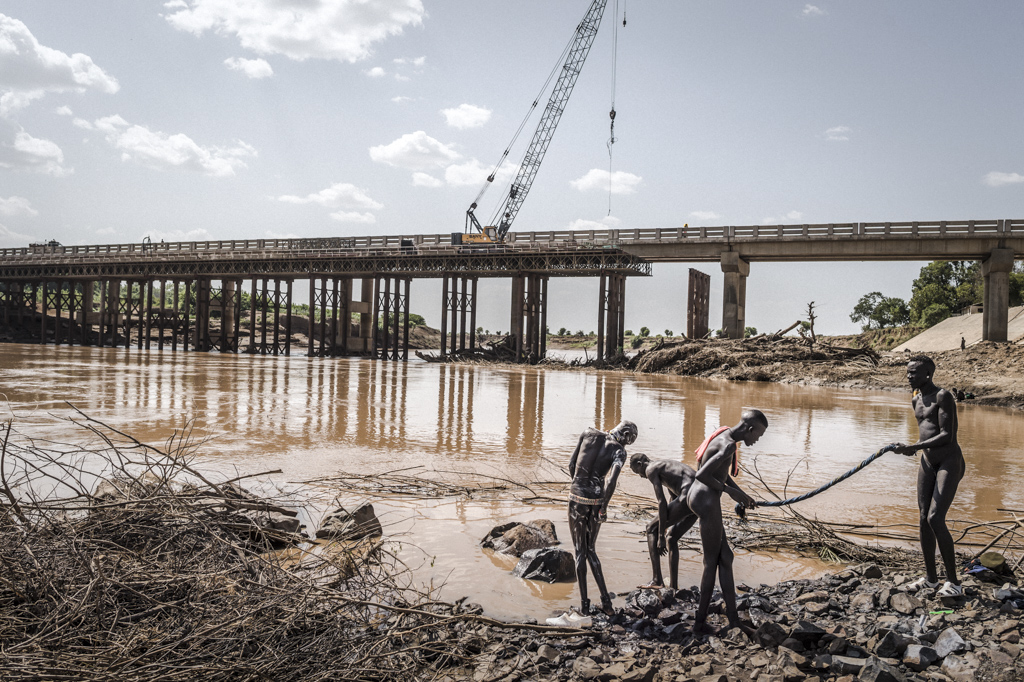 Men of the Nyangatom ethnic group work by the shore of the Omo River. Behind them, a bridge under construction will merge the territory of the Karo with the territory of the Nyangatom. The bridge is being built by the China Communications Construction Company, one of the major building companies in China. John Hopkins University states that, since 2000, Ethiopia has become the second largest payee of Chinese loans in Africa, with a total balance of 12.3 billion US dollars. Kangata, South Ethiopia, 2017 Foto: Fausto Podavini 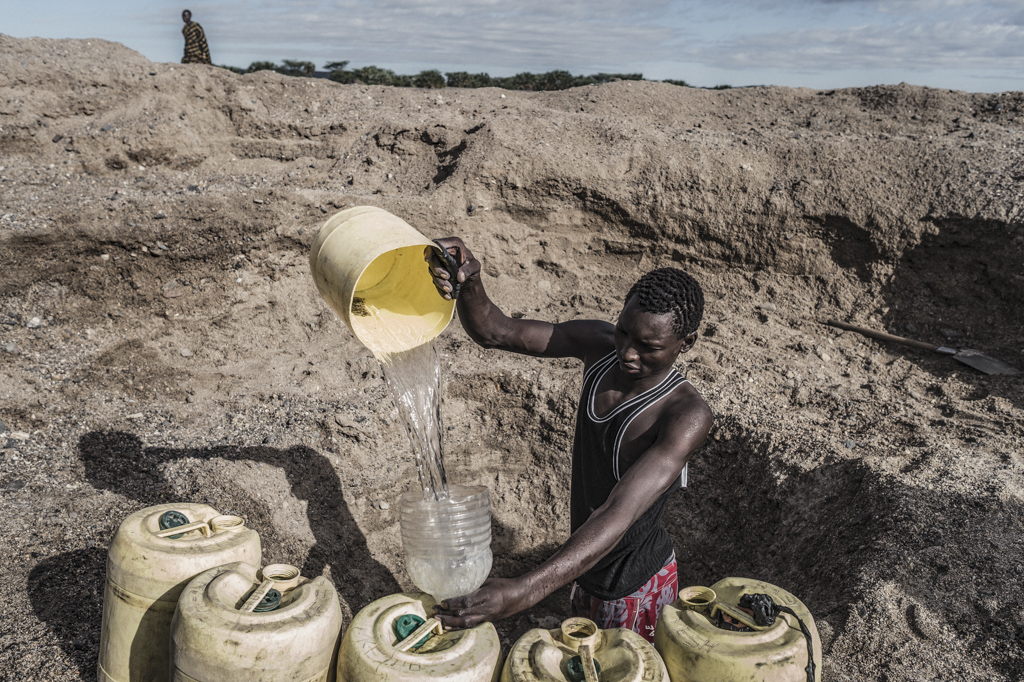 A man recovers water from a pit dug in the bed of a river.  These wells are the only source for water for the needs of the population. The depth of the well is a sign of the great drought that the area is experiencing. The population of Turkana is directly impacted by the operation of the Gibe III dam upstream on the Omo River. The river which flows into Kenya and the Turkana Lake, is the main tributary that produces 90% of the water to the lake. Near Kalokol, Kenya, 2017 Foto: Fausto Podavini 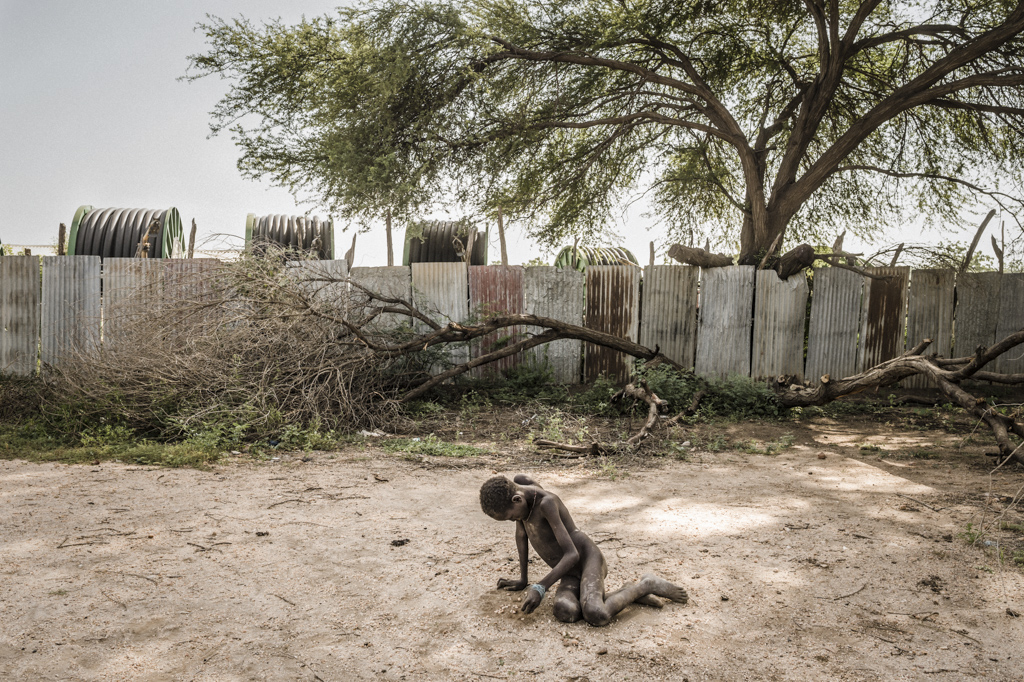 In the last village before crossing into Kenya, a boy, sitting on the ground completely naked, plays in the sand near where the area used as a warehouse for construction material. The International Commission on Dams requires that, before starting construction,  the impact and full consequences for the local populations, need to be taken into consideration. In a report from 2010, the Commission states, that in the case of the Gibe III dam that advice has been disregarded. South Ethiopia, 2017 Foto: Fausto Podavini 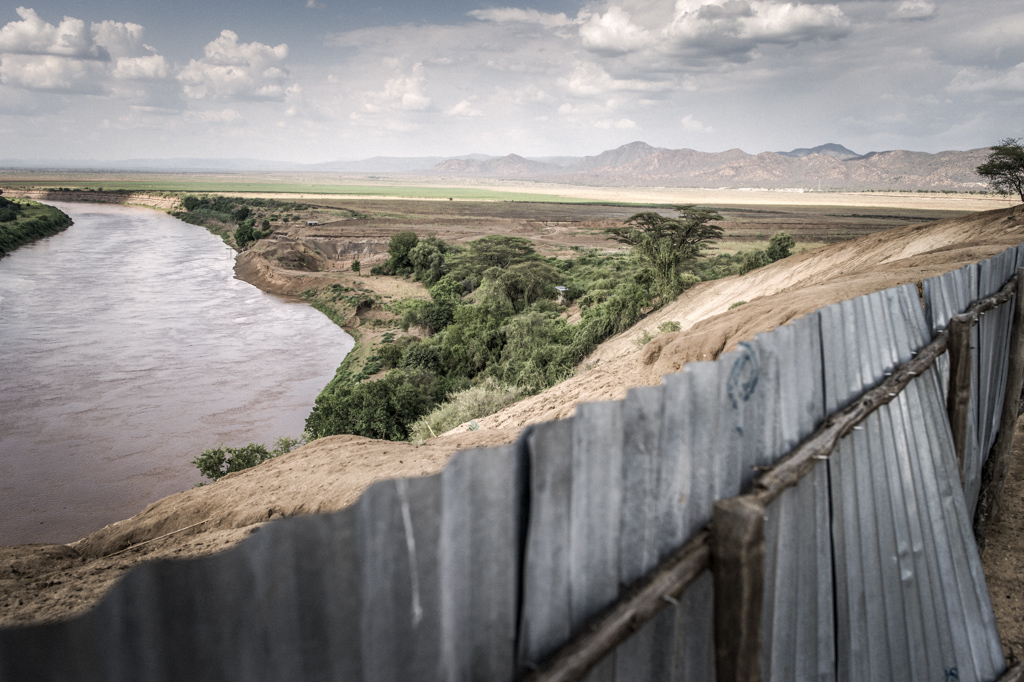 A Karo village is situated in a natural bight of the Omo River. The Karo are a small tribe with an estimated population between 1,000 and 3,000 people. Recently, a resort has been built next to the village. In the background, cotton plantations have replaced rainforest. Controlling the Omo River will make a huge government project possible: the Omo Kuraz Sugar Factories Project, which sees the cultivation of sugar cane on approximately 245,000 hectares (600,000 acres) to be used to produce both ethanol and sugar. Along the eastern shore of the Omo River, near a Karo village, South Ethiopia, 2016 Foto: Fausto Podavini