Massimo Berruti - The Dusty PathIt was just after the assassination of Benazir Bhutto that something clicked into my mind: Pakistan was the country I had to see.During the elections, on Feb 2008, people were excited, full of hope, trustfully looking at their future. A strong movement guided by lawyers was riding the wave  pushing the new elected government to restore the Chief of Justice Iftikhar Muhammad Chaudhry.Pakistan today  is the result of more than 30 years of "mistakes", 30 years of democracy failure. The military were in power for more than half of the country existence.  Some civil governments were corrupted, some others are corrupted. Corruption is vicious here.  This is a strategic land and to be in power can be a very lucrative opportunity. The Pakistani economy is left undeveloped so that dependence on foreign aid remains an indispensable requirement.  On one hand, if the US wanted a chair around the table against the economic aid and on the other hand, population in Pakistan has to face, in addition to terrorism, an inexorable impoverishment, caused by the tax increase, the energy crisis and the rising  prices  of the  indispensable  goods, a consequence of a new "Value Added Tax" (VAT) imposed by the International Monetary Fund  and the World Bank, both threatening to cut the distribution of funds if this new regulation is not applied. What was a colony before, looks like a province now. 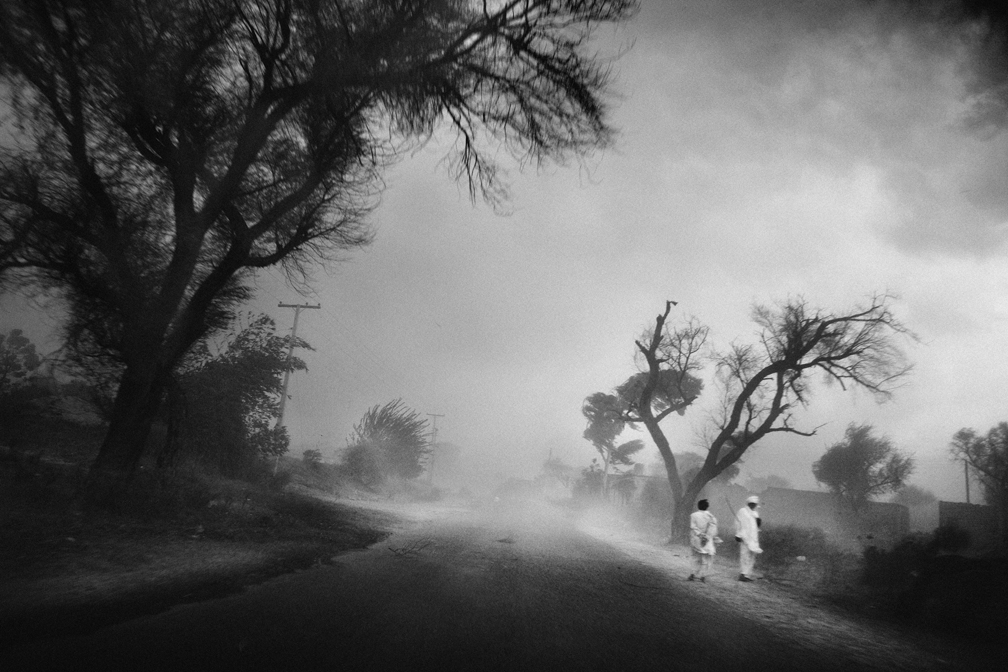 Rawalpindi, October 2008: A dust storm in the countryside just out the Rawalpindi District. 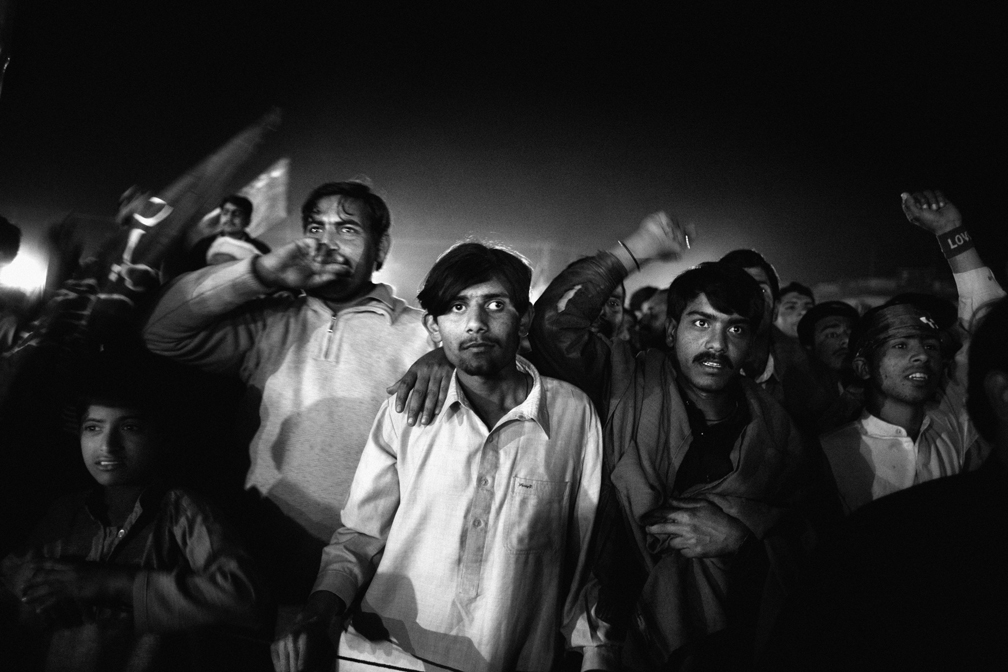 Rawalpindi, March, 2008:  Pakistan Muslim League Nawaz (PMLN) supporters came to hear the speech of one of their local leaders just a few days before the vote. 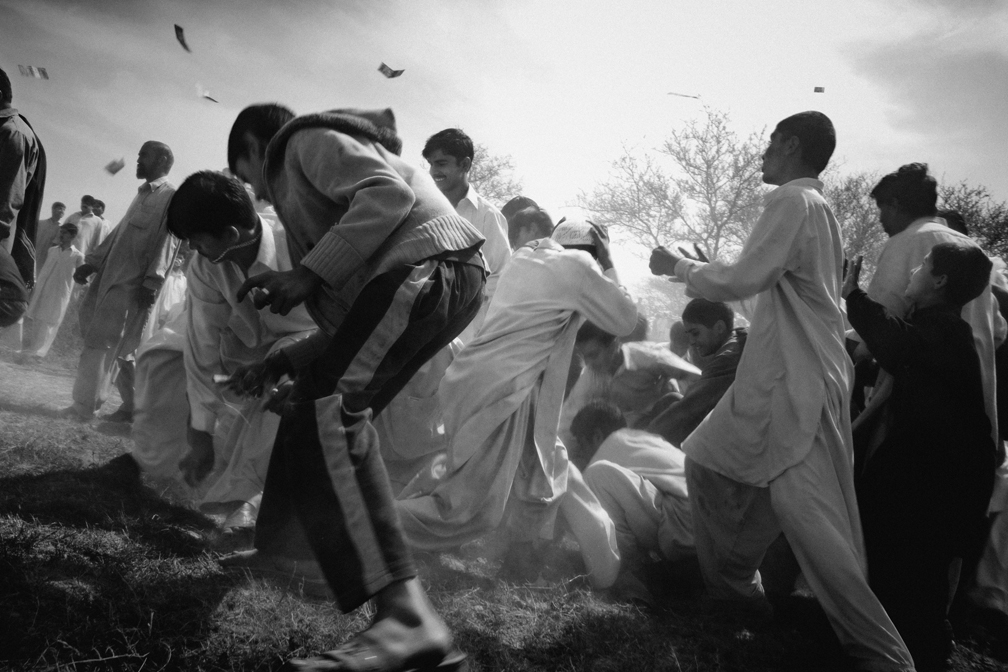 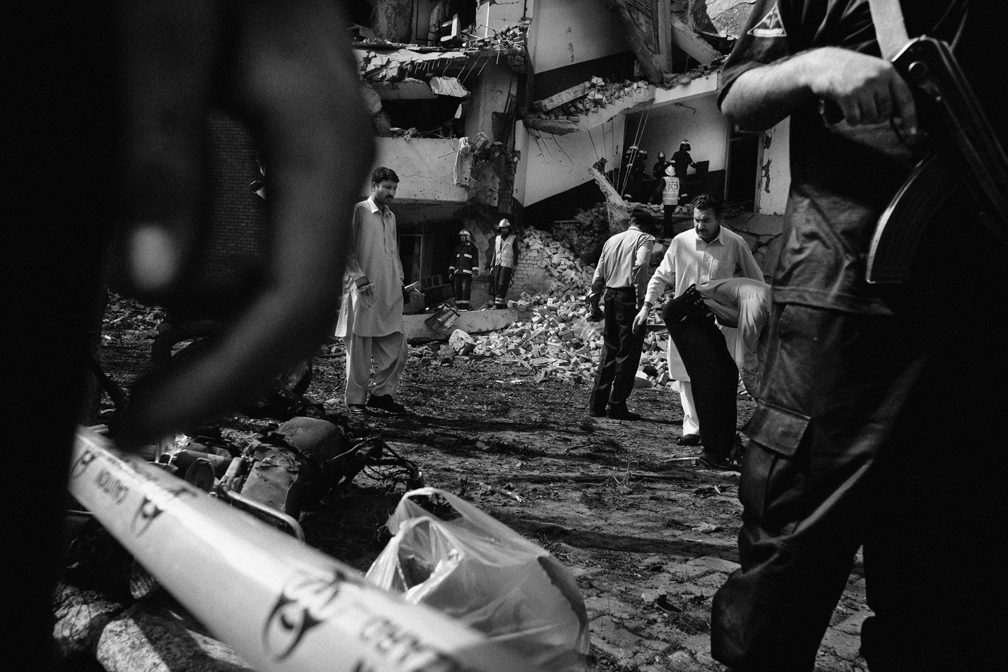 Islamabad, October 2008: Terrorist attack against the anti-terror department of the police. The terrorist was carrying the bomb on his motorbike. While he was stopped at the entrance gate he detonated it. 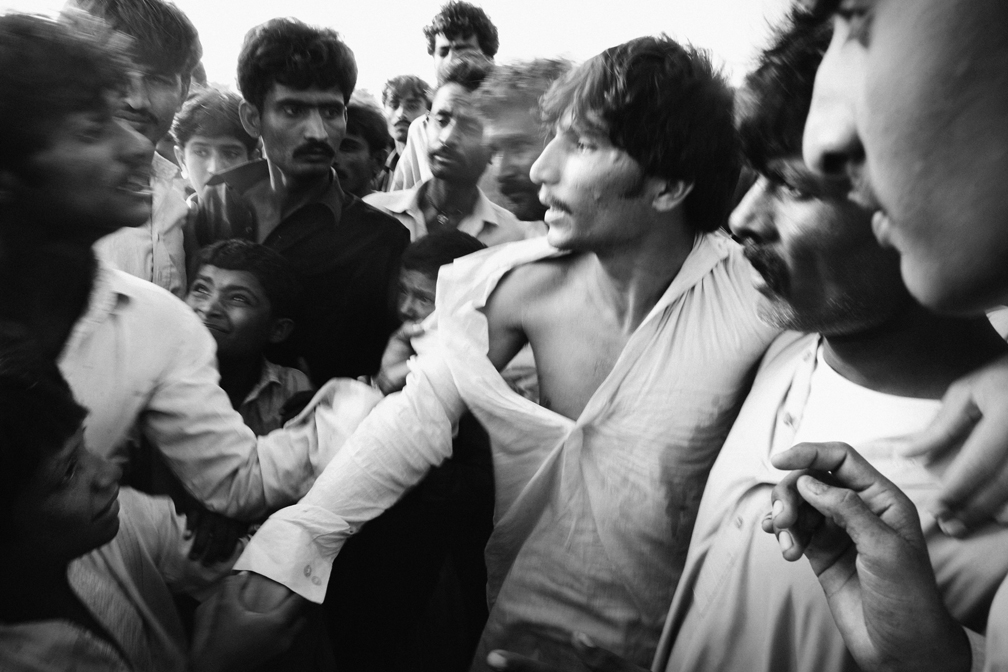 Thatta, June 2010: Thatta relief Camp, placed inside Makly graveyard, one of the most ancient and historical graveyards in the whole of Pakistan. Refugees from Thatta town discussing an incident that occurred between residents of the camp. Many people, even inside the camps, have not found available shelter for more then a month, since the beginning of the monsoon season. 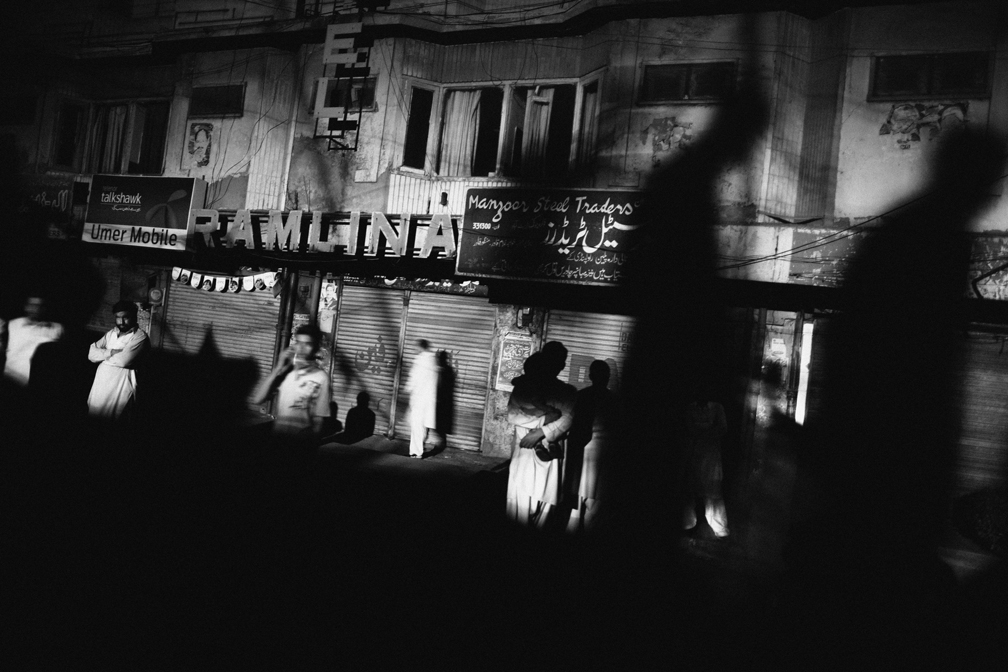 Abbottabad, June 2010: People gathering on the streets to protest a massive and unscheduled power cut that left the town without electricity for more than 24 hours, during one of the hottest summers remembered in Pakistan. 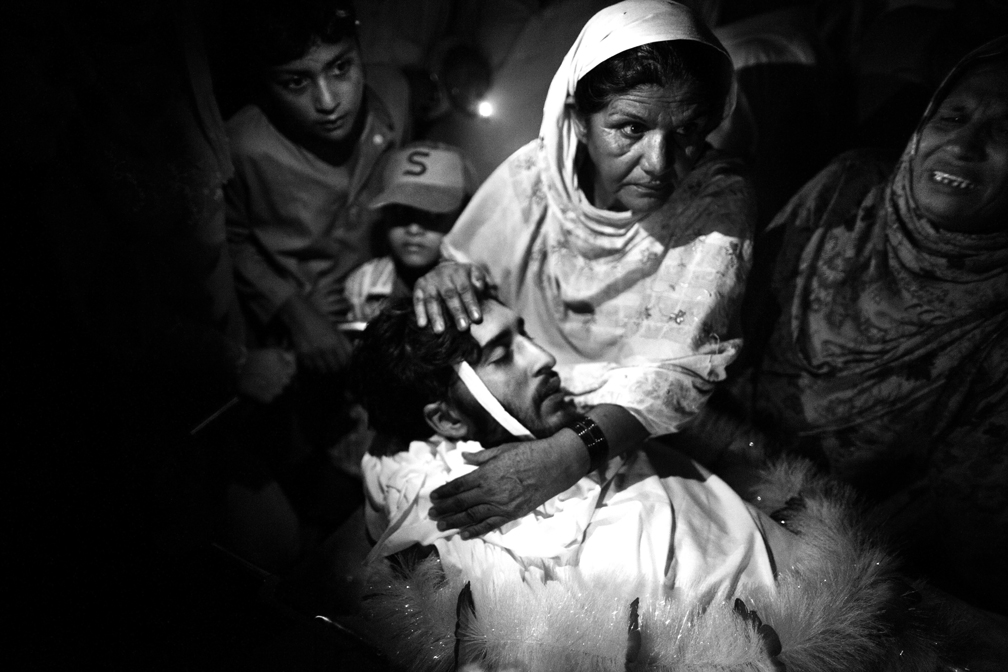 Karachi, July 2010: The dead body of a 20-year-old man assassinated at the open market by an unknown gunman. His mother and the rest of the family are gathering around his body at the Abbasi Hospital mortuary in order to carry it home for the funeral. 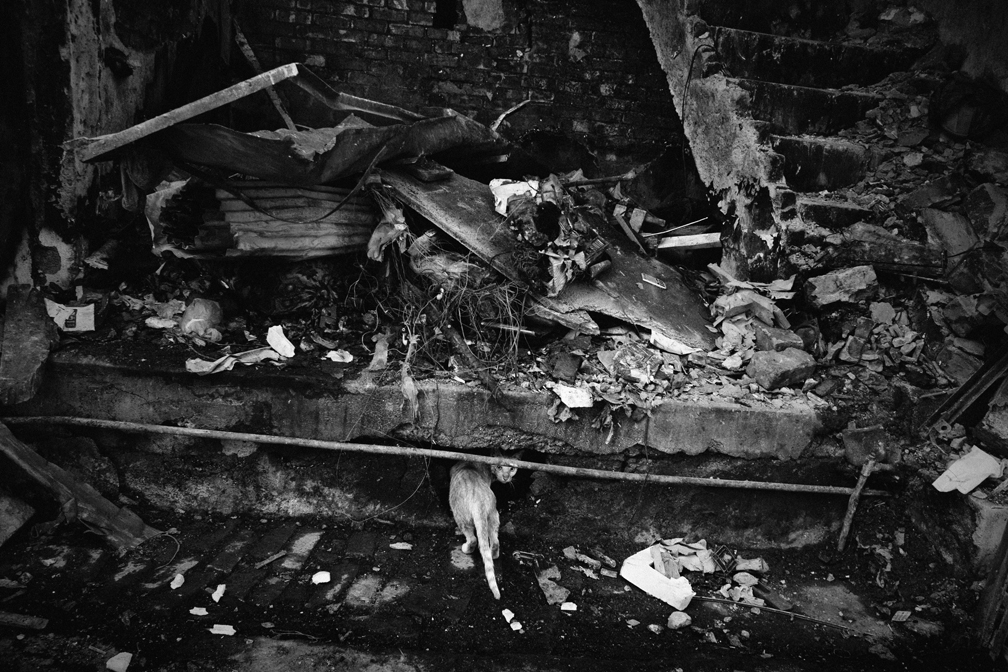 Peshawar, June 2009: A cat looking for food in a shop destroyed by a suicide blast. 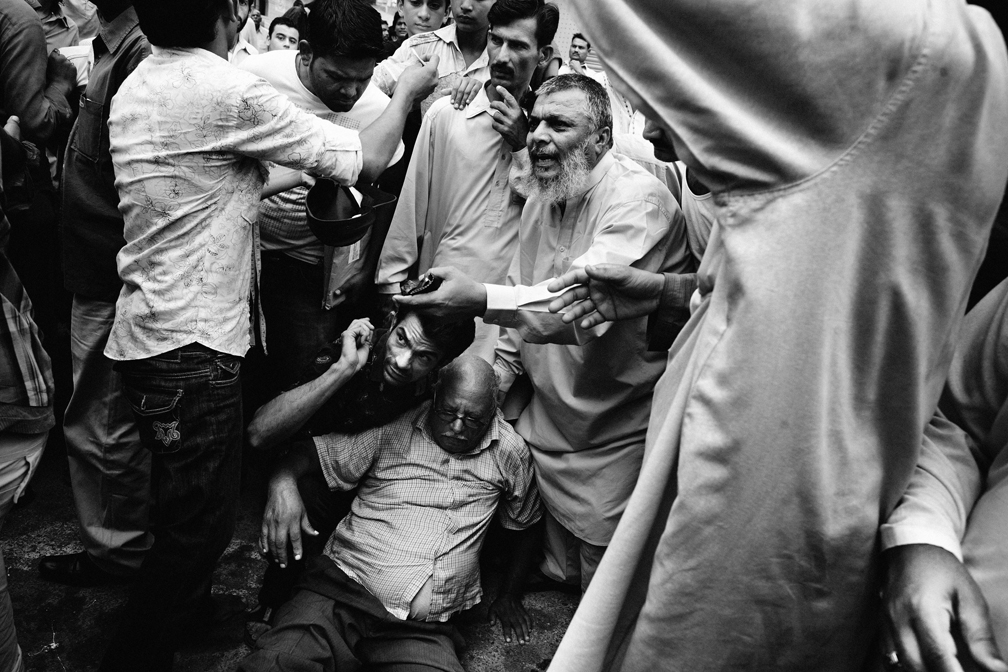 Karachi, September 2010: A man mistakenly injured by unknown gunmen as he was passing by during the targeted killing of two journalists in Saddar. 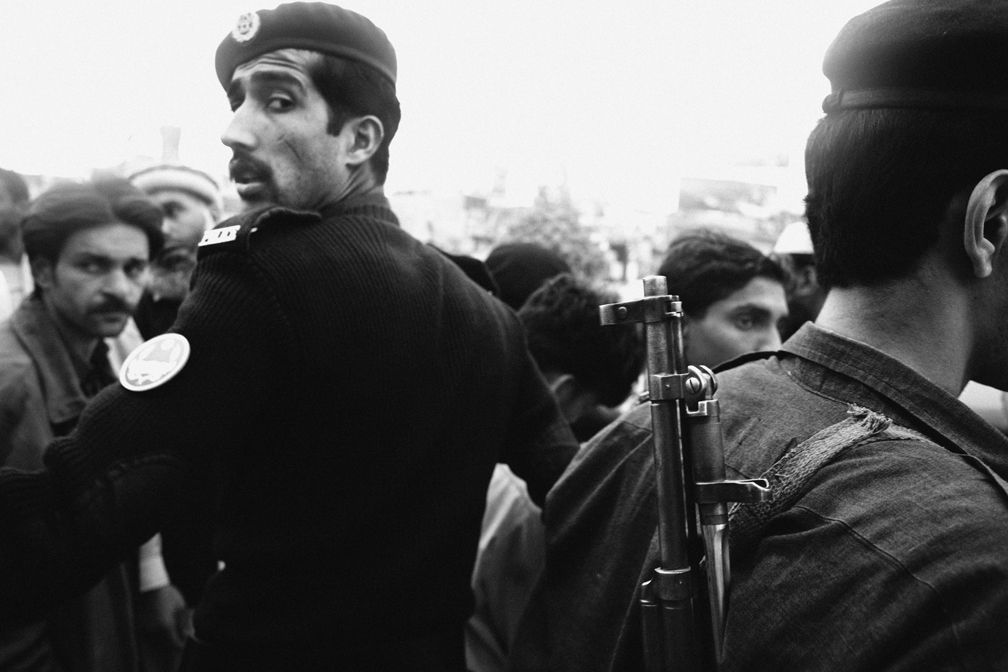 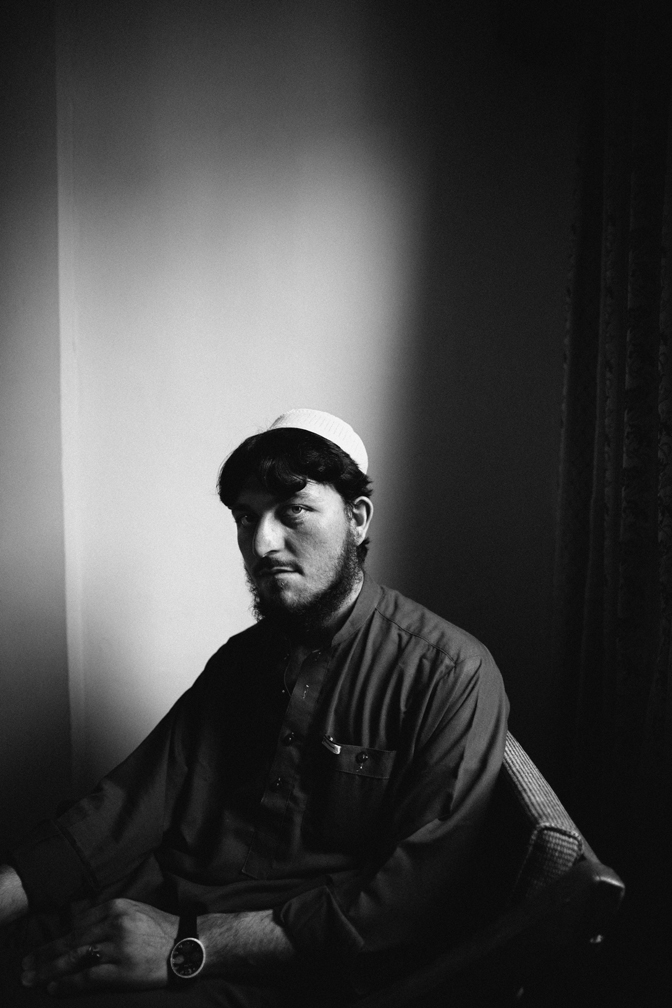 Islamabad, June 2011: Ijaz Ahmed, a 20-year-old college student. The 23/1/2009 his uncle (34 years old) was in Muhammad Faheem house when the house was targeted by a Drone. He was a shop keeper, he had 2 sons and 3 daughters. On the newspaper appeared that a secret agent declared that 5 Arabs were killed in the attack. 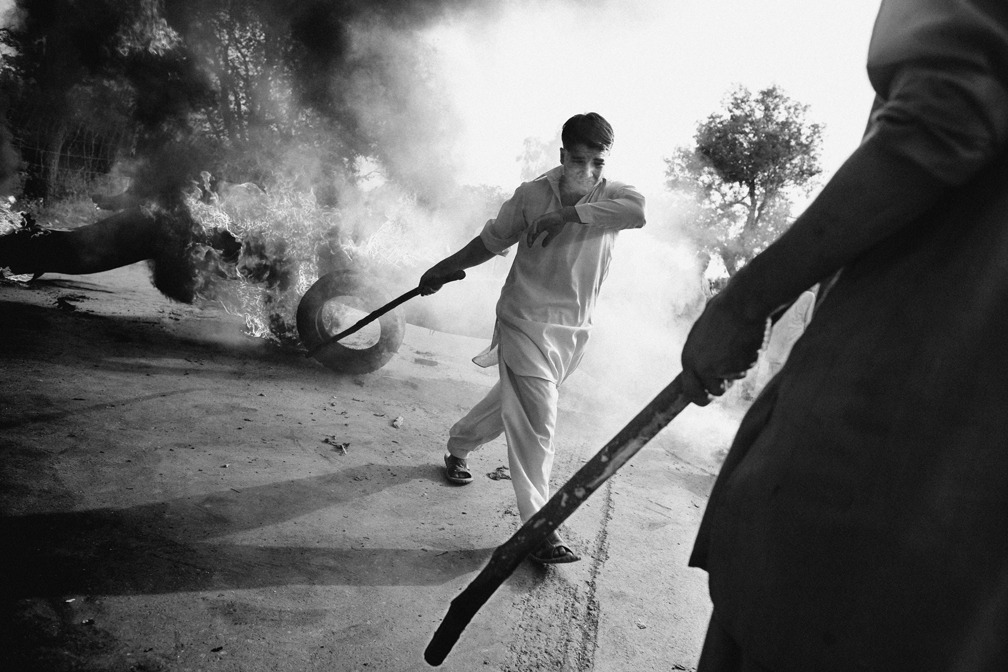 Abbottabad road, June 2010: Protesters burning tires on the street in response to a massive and unscheduled power cut that left the town without electricity for more than 24 hours, during one of the hottest summers remembered in Pakistan. 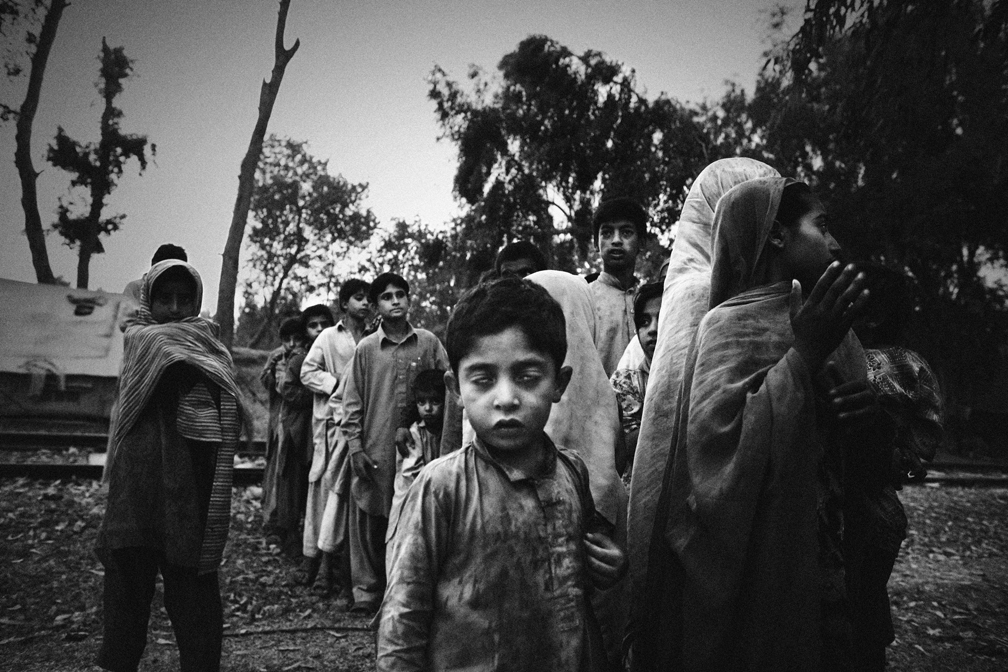 Mardan district, Malakan Road, June 2009: Displaced children waiting for a food distribution made by a local NGO. These people were not accepted in the official camps. They live without any government assistance. 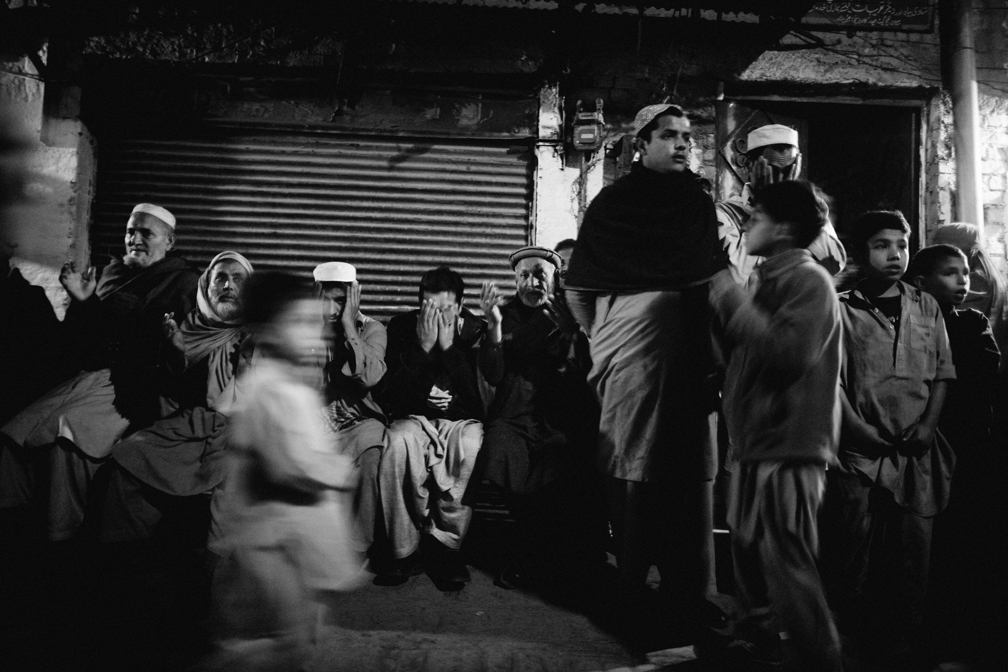 Peshawar, December 2009: The neighbors of a 28-year-old man, who lost his life in a suicide blast at a market near the district court, in front of his house waiting to attend the funeral. 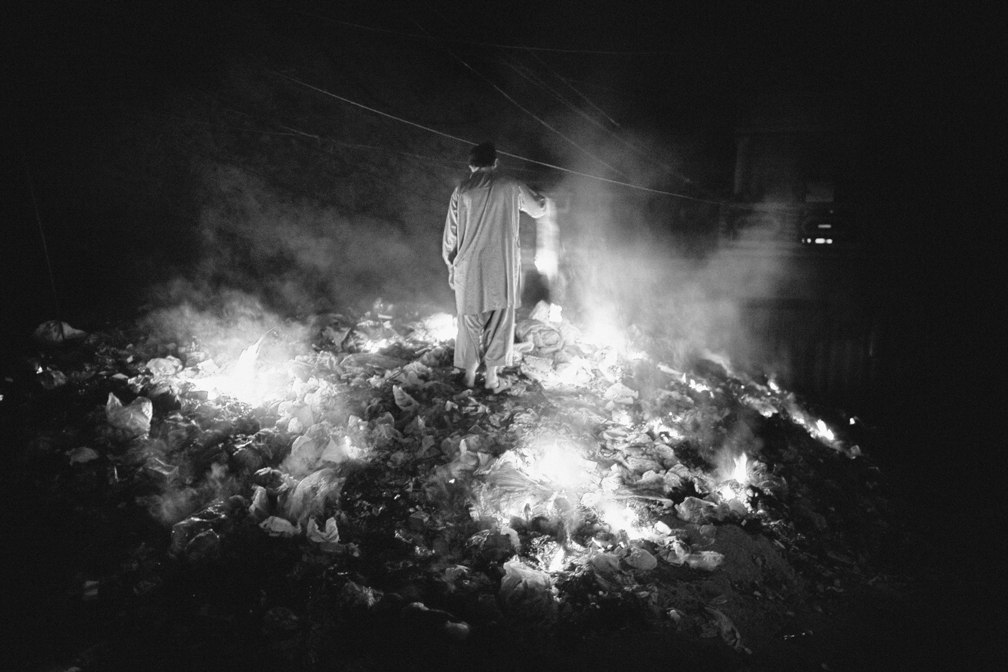 Rawalpindi, May 2009: A man standing on a burning pile of garbage.