Finalist of the 2018 FotoEvidence Book Award with World Press Photo

Tamara, the first trans woman I met in Lima, Peru, often told me she wasn’t going to live past 30. How could she, she’d ask, when society treats her as less than human? Like a self-fulfilling prophecy, Tamara's death this year came shortly after her 30th birthday.

Through years of documenting the hardships trans women face, I’ve realized that an early death is more common than a long life. In fact, most trans women in Latin America die or are murdered before they reach 35 and the region leads the world in homicides of transgender people. Latin America’s chauvinistic, conservative culture discriminates against trans women, seriously threatening their health, security, life expectancy, and employment prospects. With few options or economic support, the majority fall into prostitution where they are susceptible to disease, violence, and abuse.

Traditional media, focusing on sensationalistic aspects of their lives, contributes to a narrow perspective that further stigmatizes trans women. In addition to documenting injustice, I’ve aimed my camera on their daily lives to show that they seek happiness, fulfillment, and love just like everyone. 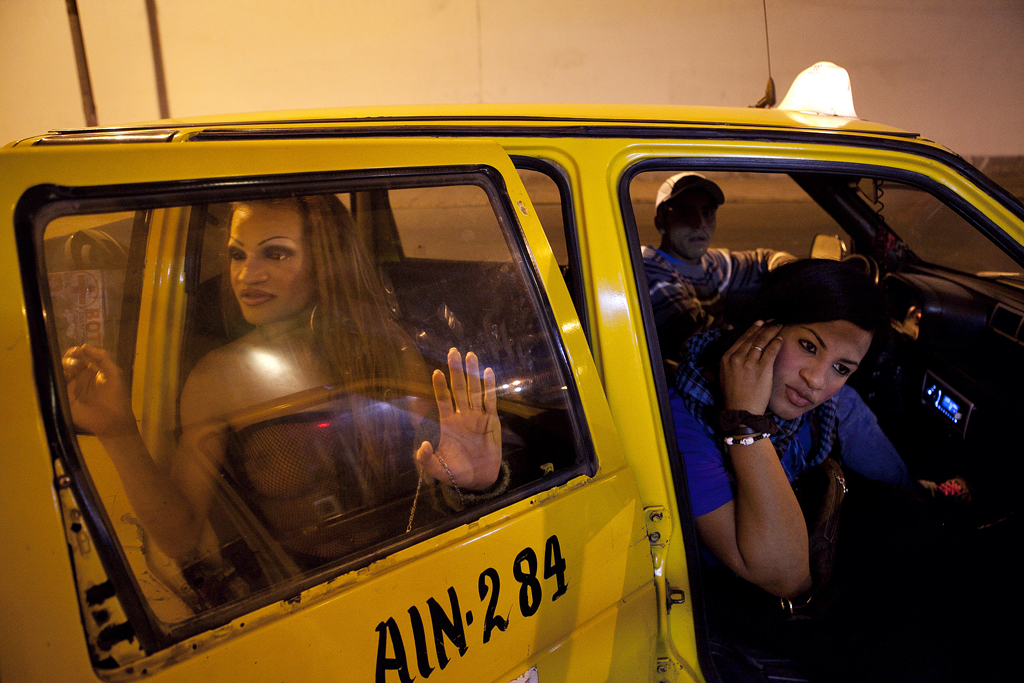 Like many other countries worldwide, there is a stereotype in Peru that trans women are only capable of working as hairdressers or sex workers. Because of high competition for salon work and the need to pay for studies, many trans women are relegated to prostitution. Here Camila, left, gets out of a taxi after a long night of dancing. 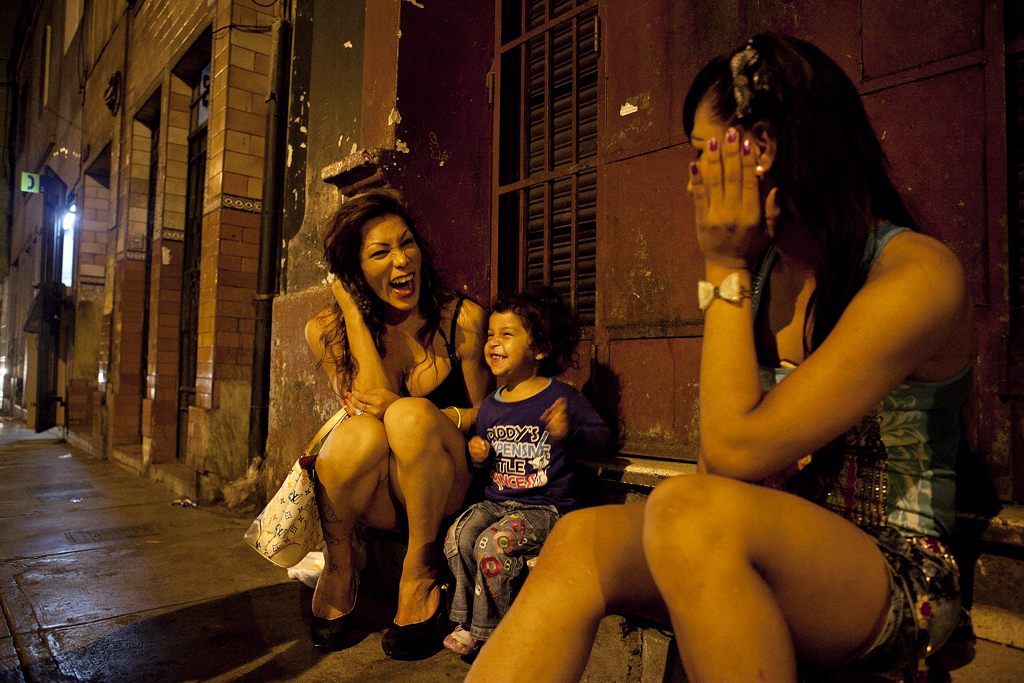 Danuska, left, and Oriana, right, talk with a young girl and her mother, not pictured, on the street while experiencing down time during work. 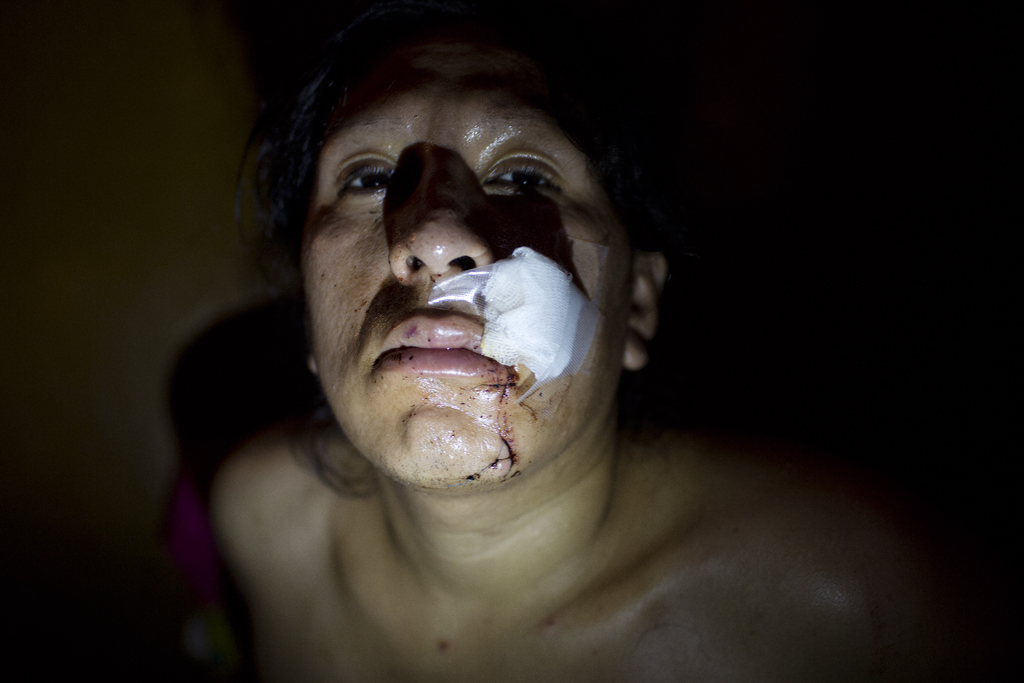 After resisting sexual relations with a client without a condom, Tamara was injured with a broken glass that he threw at her face. "You have to be careful with clients because they're not clients, they are bad men that can cheat you, that can take you somewhere. They treat you bad, they beat you, and they rob you. I have suffered through that a few times," said Tamara in an interview. 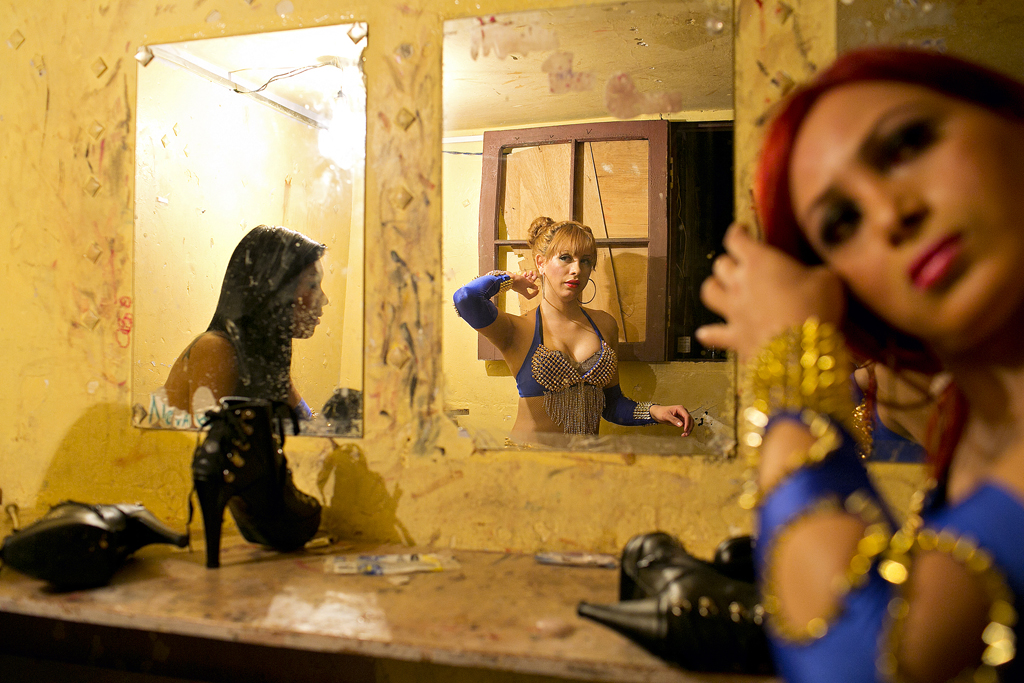 Along with other members of Peru's only transgender cumbia dance group, Briss, center, waits backstage before performing at a local LGBTQIA night club. Though Briss says it's hard to live as a trans person in Peruvian society because of the psychological abuse, she said dancing for the Tranxgresoras strengthens them and helps them to push forward. 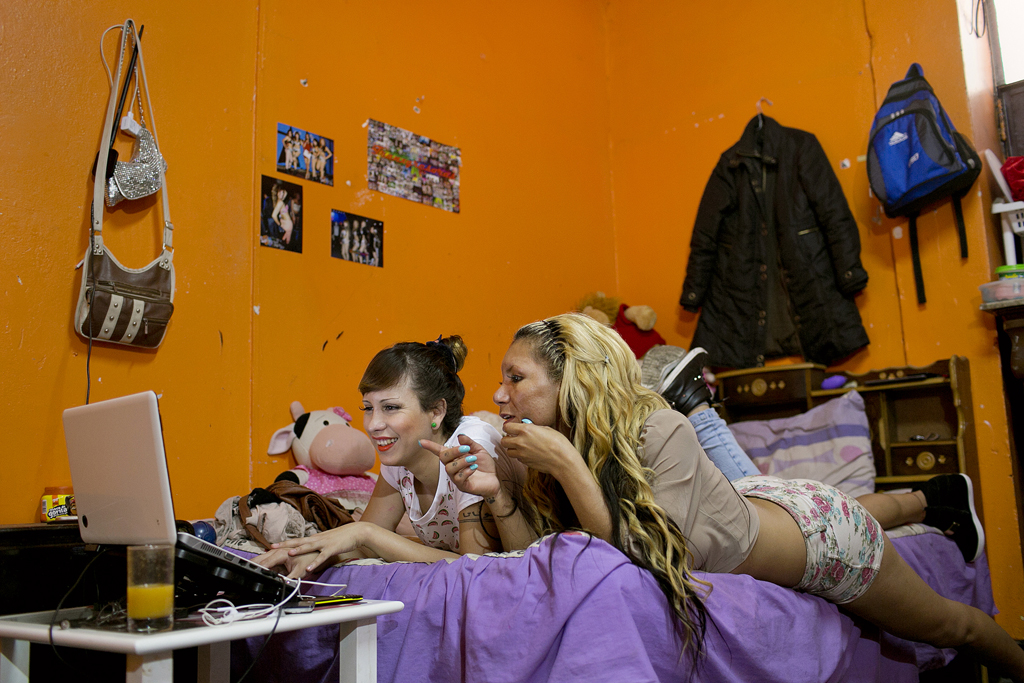 Briss, left, looks at her computer with her friend Erika, who has since passed away. 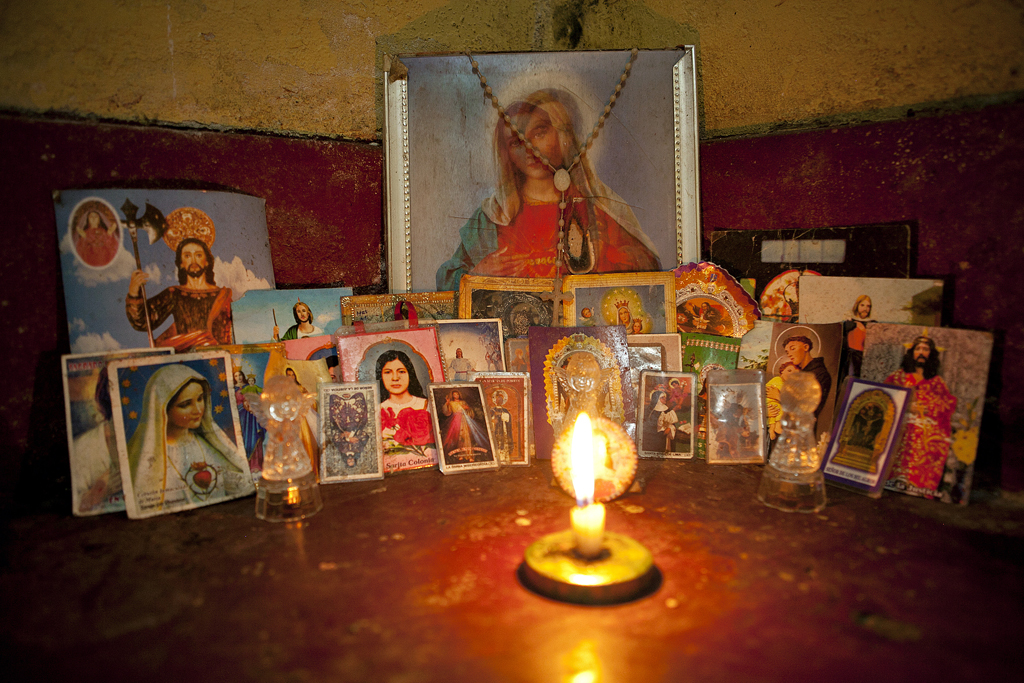 Tamara, who always keeps a collection of saints in the corner of her room with a lit candle, often talks about how she will not live past 30. 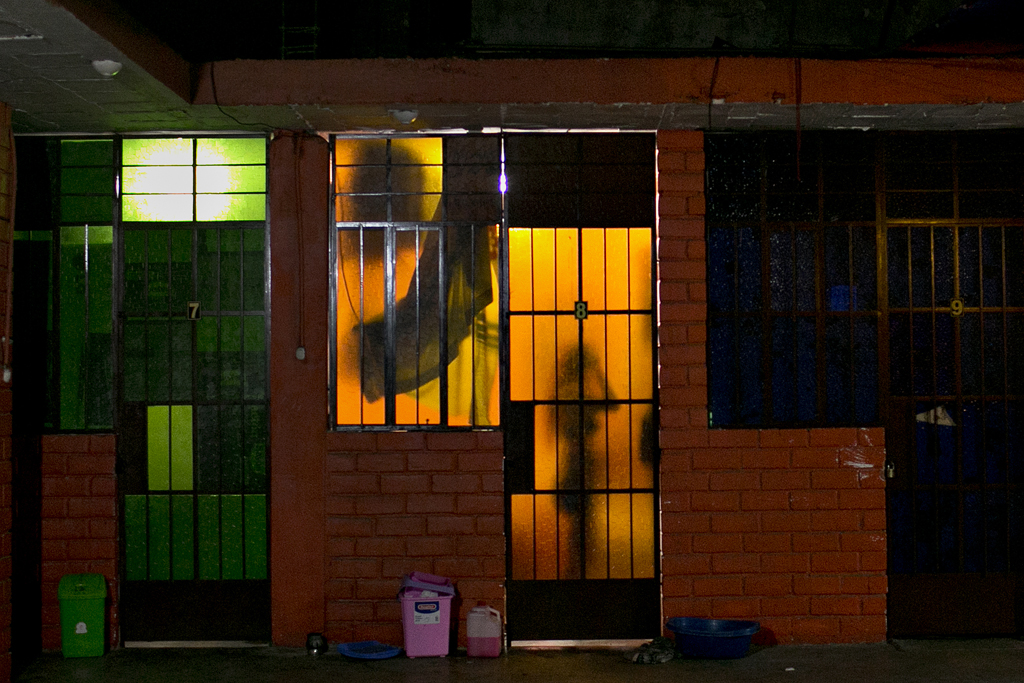 Trans women are extremely marginalized and discriminated against in Peruvian society. Persecution begins early, causing them to abandon their studies and families. With few options or support, many practice prostitution. As sex workers with no legal protections, they're at greater risk of violence and sexual and substance abuse, and are less able to protect their health. Here, a trans woman stands inside a room of a home where many rent rooms. 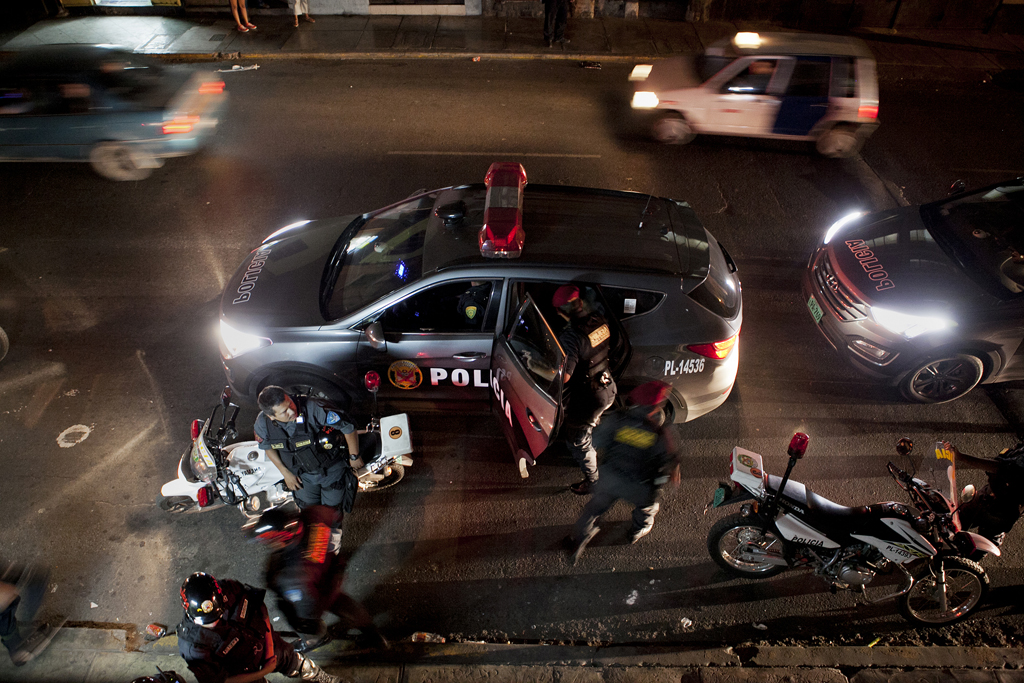 Police put a trans woman into their vehicle during a nightly patrol in downtown Lima. 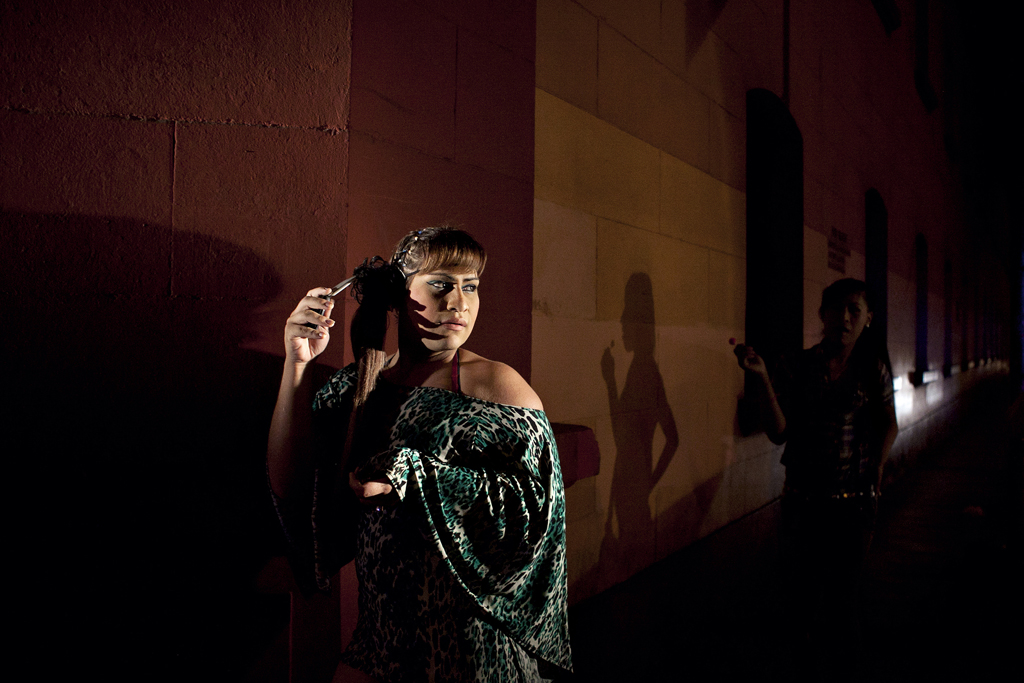 Asumi, a transgender sex worker, stands in the light of a police car during a nightly patrol along the streets of downtown Lima. 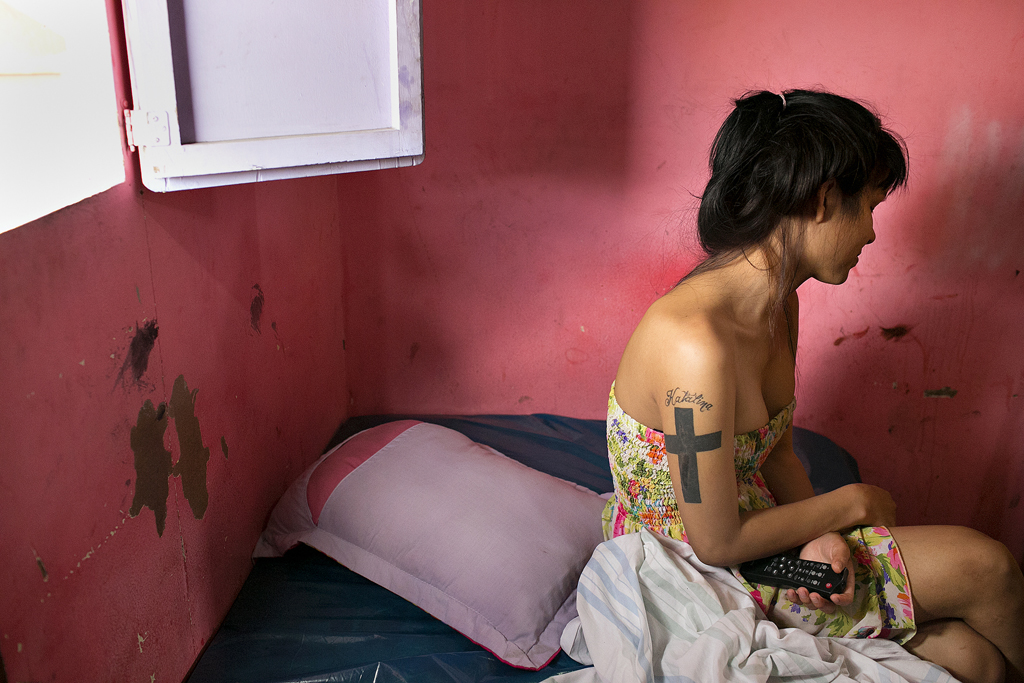 Katalina sits in Tamara's room after talking to her mom on the phone. She cried off and on that afternoon, saying that she missed her. 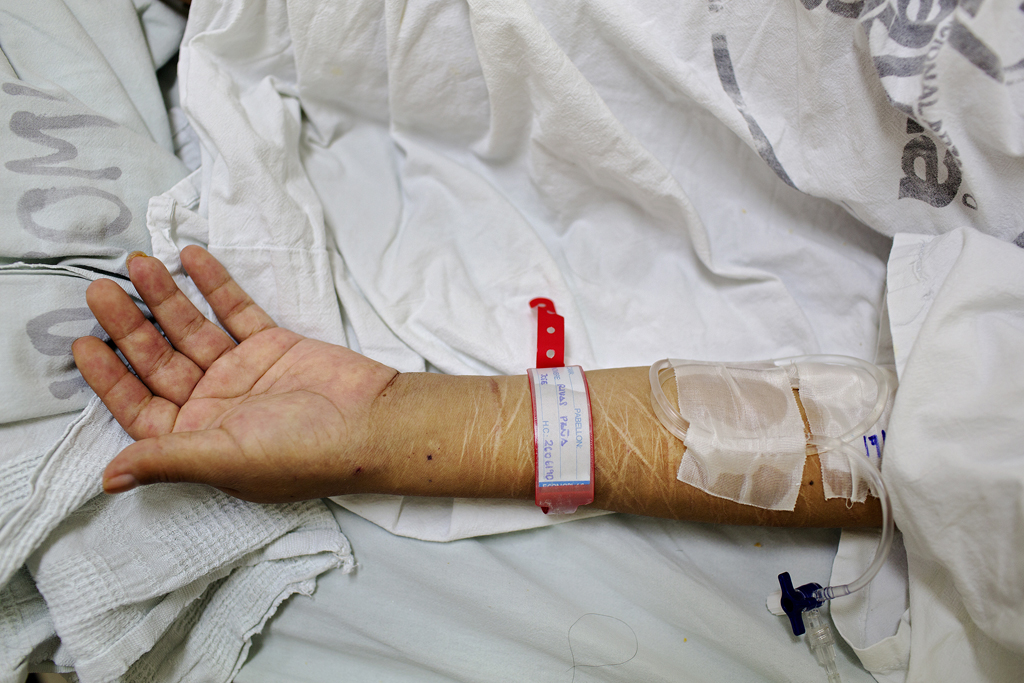 Remnants of enduring a long, hard life, Piojo's emaciated arms are covered from wrist to elbow in deep, razorblade-thin scars. Piojo passed away on March 29, 2015, due to complications with Tuberculosis and HIV/AIDS. 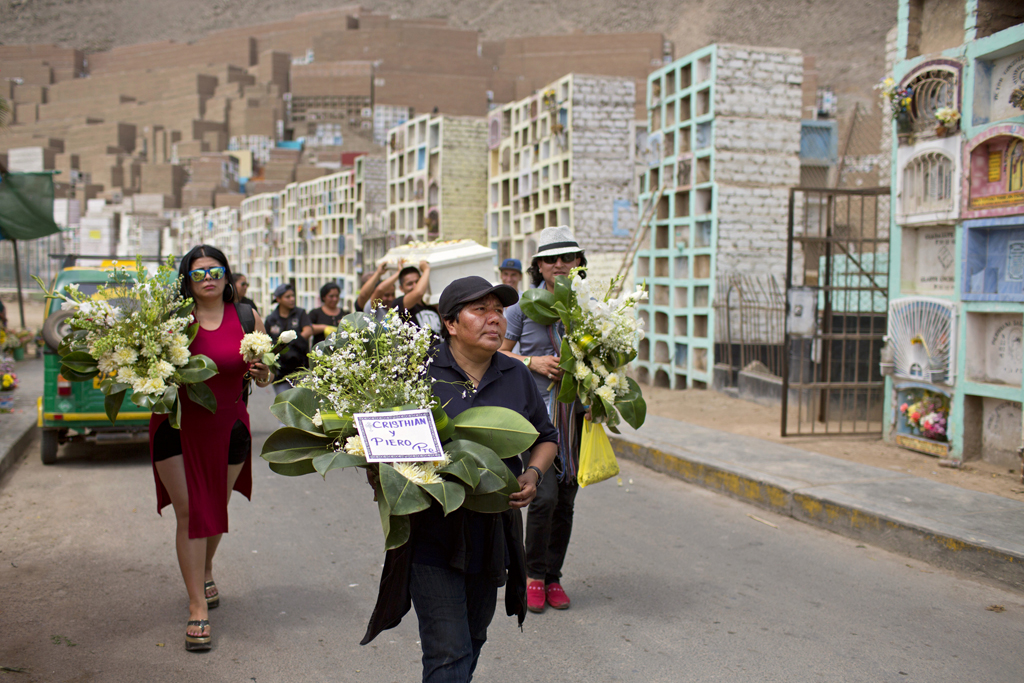 Evila, Tamara's mother, walks with friends who carry Tamara's coffin towards her burial place in Lima. Tamara's death at a young age is tragically common, as most trans women in Latin America die or are murdered before they reach 35. Latin America leads the world in homicides of transgender people (80% of global trans homicides occur in the region) and HIV prevalence among trans women is nearly 50 times higher than in the general population.