It’s Only the Beginning

Next March marks six years since the start of the Syrian uprising, a movement that, for a short period from March of 2011, called for peaceful change in an authoritarian state.

Today, after Aleppo, a city that became a symbol of the war, fell again under Bashar al Assad' control, the Syrian war is at a definitive turning point. Syrian war went from being a civil uprising to being a civil war.

Then it stopped being a civil war and, with the presence of many international actors, (Russia and Iran in particular) and the threat of Islamic fundamentalism, it has become definitely an international war.

What remains of the initial uprising now seems a faded memory.

For this reason, it is important, now more than ever, to retrace the initial stages of the war in a sort of, "Once upon a time the Syrian revolution."

Before the character of the revolt changed, before it was characterized by xtremist groups, the Syrian uprising was not fueled by sectarianism. It was rather united by political and social claims, caused in large part by the economic reforms of the regime Assad.

The purpose of this project is to retrace the steps of the dawn of the Syrian revolution using an almost exclusive coverage: images ranging from Al Qusayr to Zabadani, from Homs to Idlib, and culminating in Aleppo.

The first Syrian uprisings are not only told by the conflict, but the gaze covers also the daily lives of Syrian civilians: their lives hidden in the basements, the queues for bread, the organization of the weekly demonstrations in the squares and the unpublished images of the first camps for the internally displaced inside Syria.

All these aspects help to reveal a crucial moment of the Syrian war, to return to the core of the problem, to start from the beginning to understand what drives the fate of Syria. 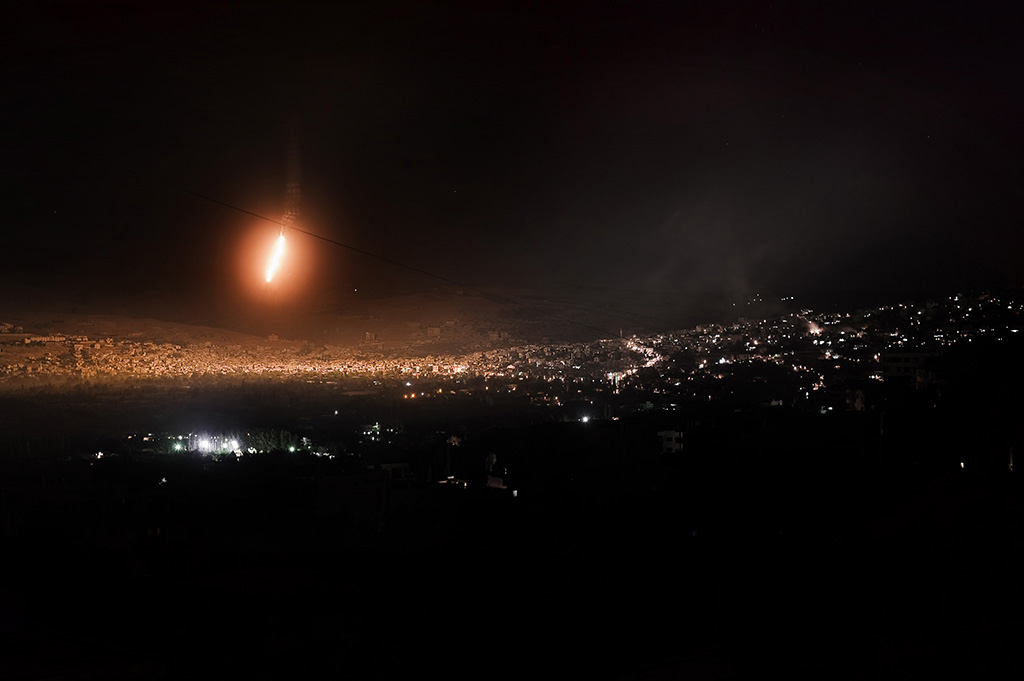 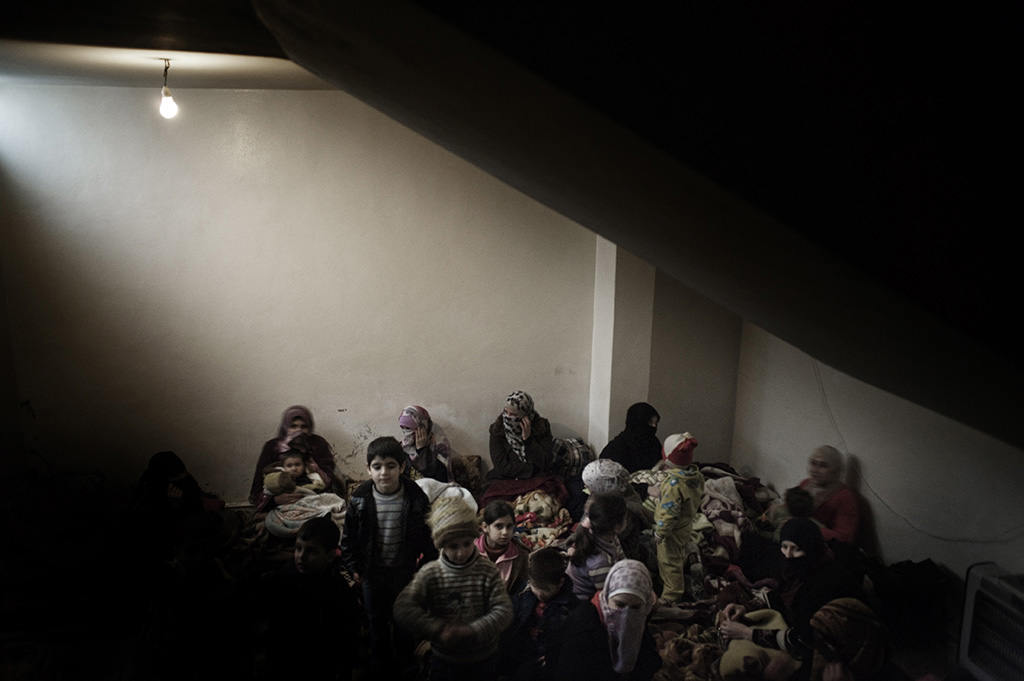 Syrian women and children inside a basement in Baba Amro, southern neighborhood of Homs, after their houses were bombed by Al Assad’s army. , February 07, 2012 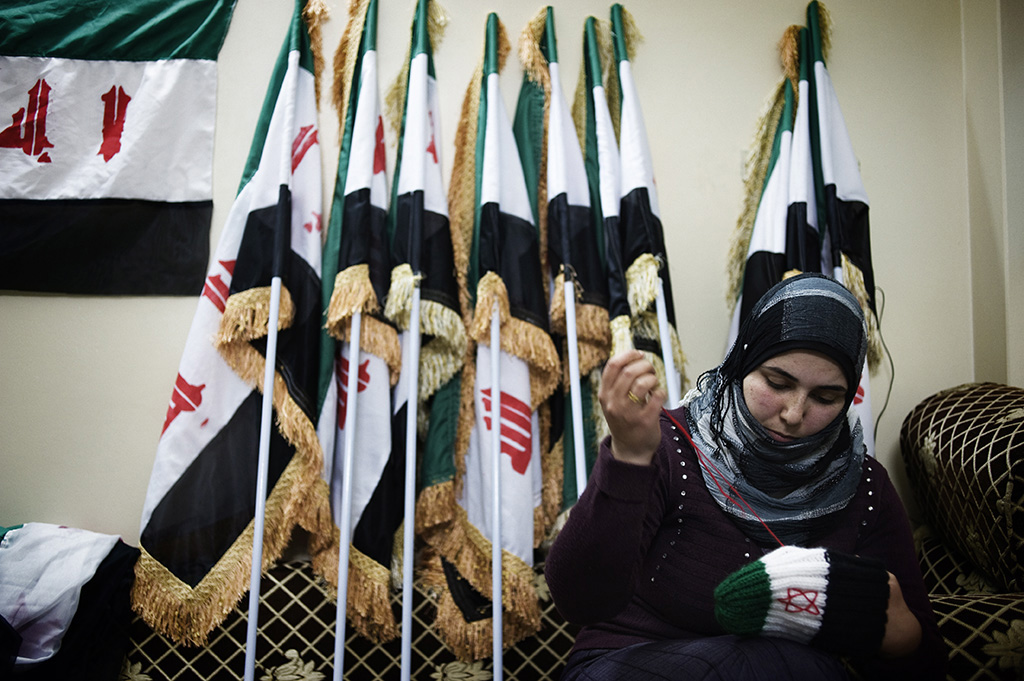 In many houses in Al Qsair, women help the revolution by sewing scarves, hats and flags or writing banners for anti-regime demonstrations with the colors of the old Syrian flag. The flag of the revolution uses green, black and white with three red stars in the middle instead of the national flag which is red, black and white with two green stars, January 25, 2012. Al Qsair is a small town of 40,000 inhabitants, located 25Km south-west of Homs. 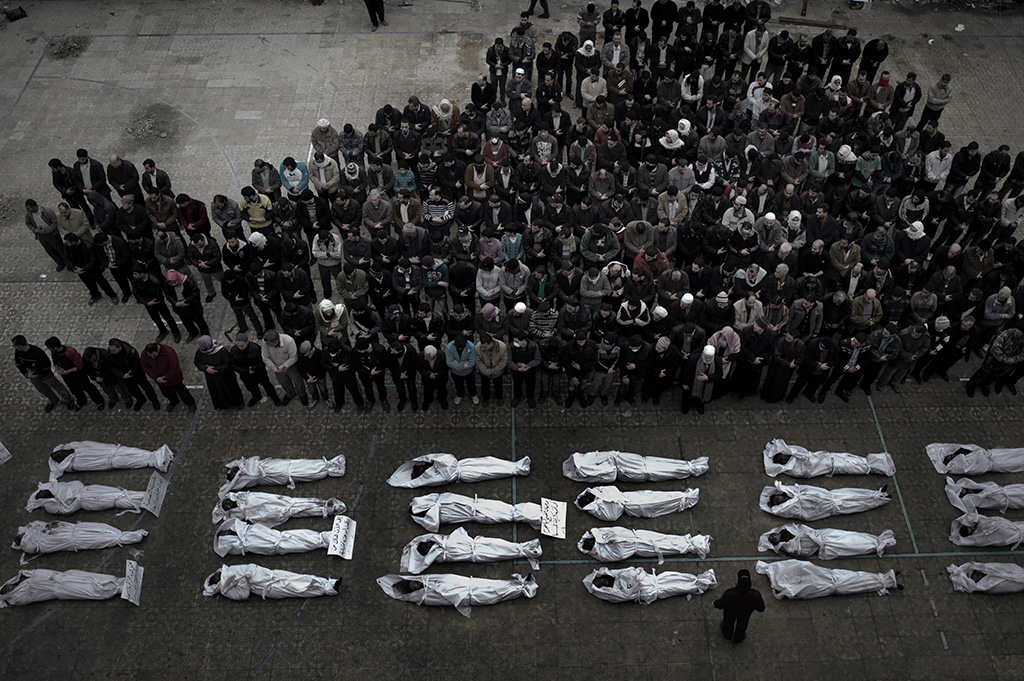 Bodies are lined up for the payer in a schoolyard in Bustan al-Qasr.  On the morning of January 29, 2013, 110 dead bodies were pulled out of Queiq River. All of the victims were shot in the head at close range with their hands tied. It is impossible to say who the perpetrators were. 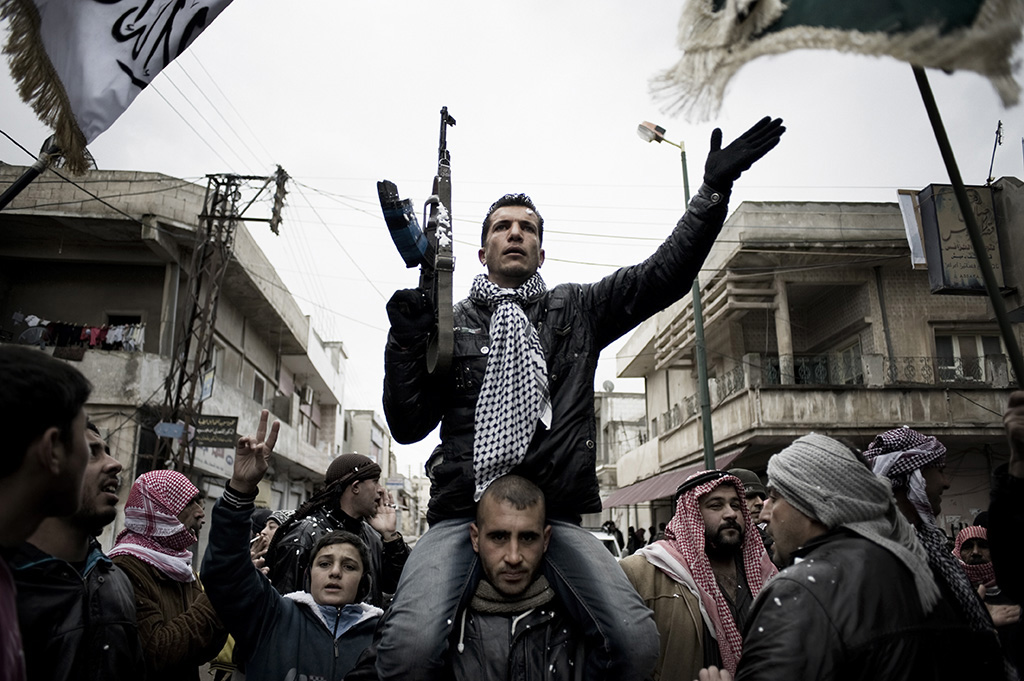 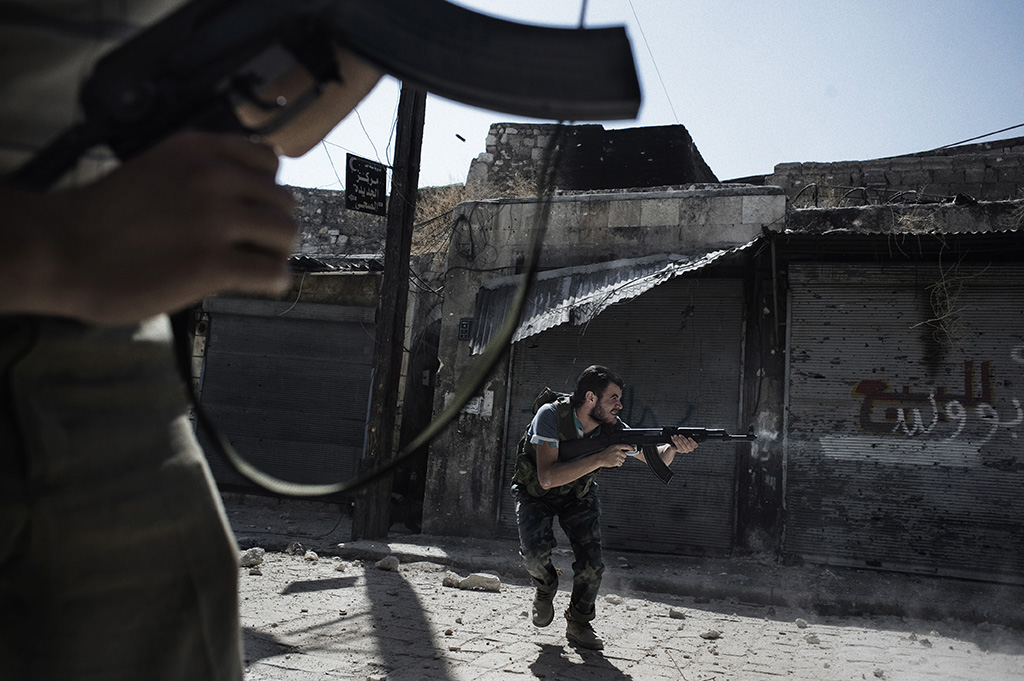 Syrian rebels clash with regime forces in the Old City of Aleppo, September 24, 2012. 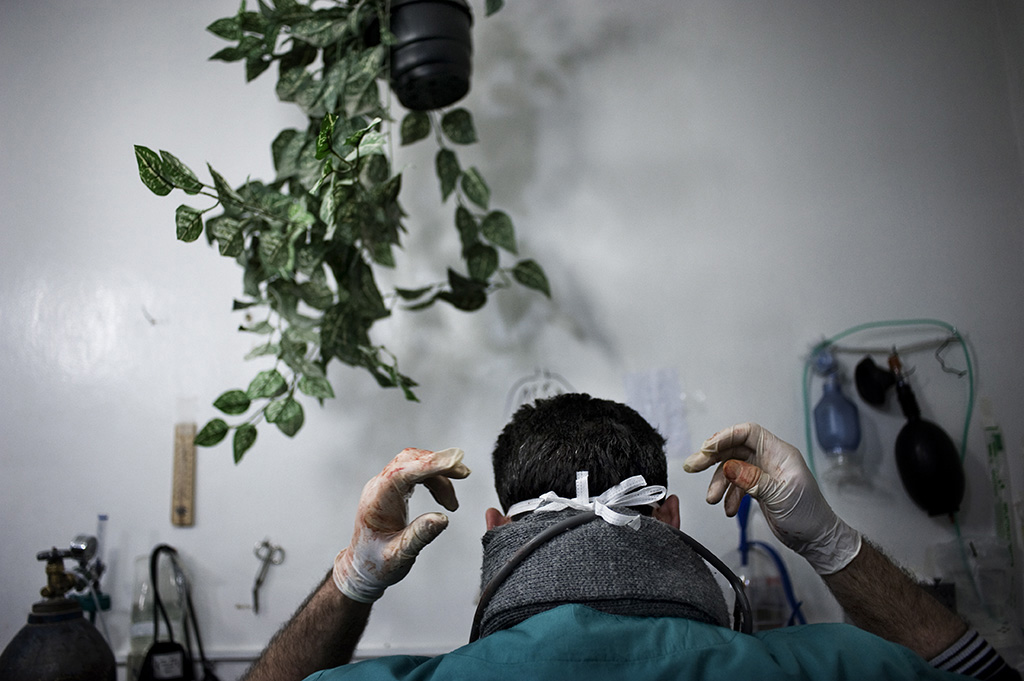 A Syrians doctor prepares for surgery on wounded men in the living room of a house turned into a makeshift hospital in Baba Amro, a southern neighborhood of Homs, February 06, 2012. 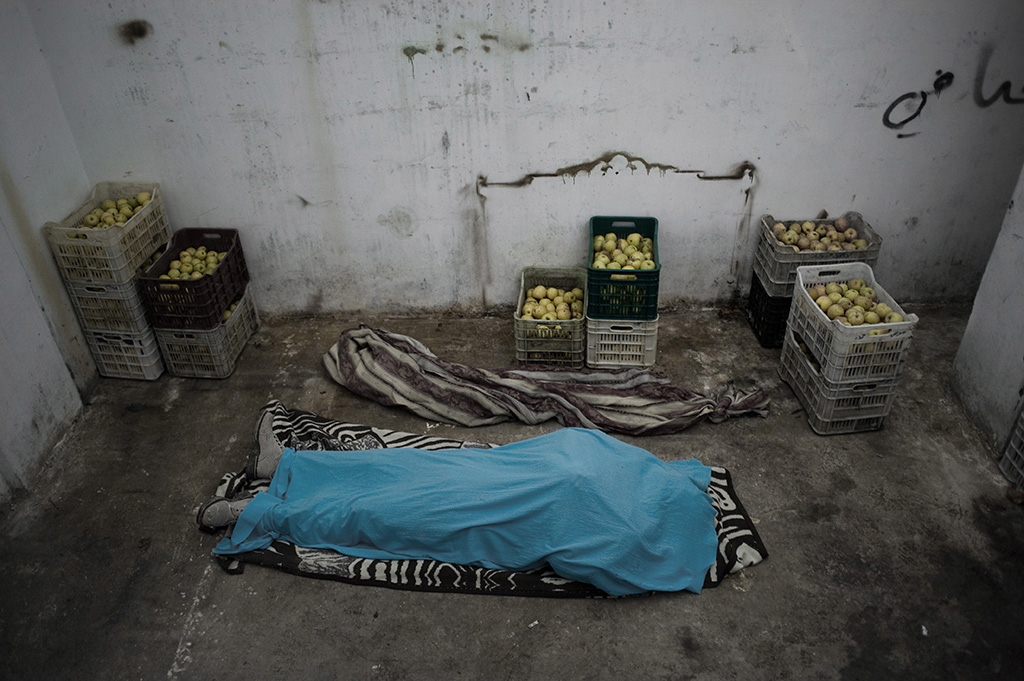 The body of a member of the Free Syrian Army, Mohammed Al Deiri, lies in an apple storage refrigerator used as a morgue in Al Qsair, February 9, 2012. 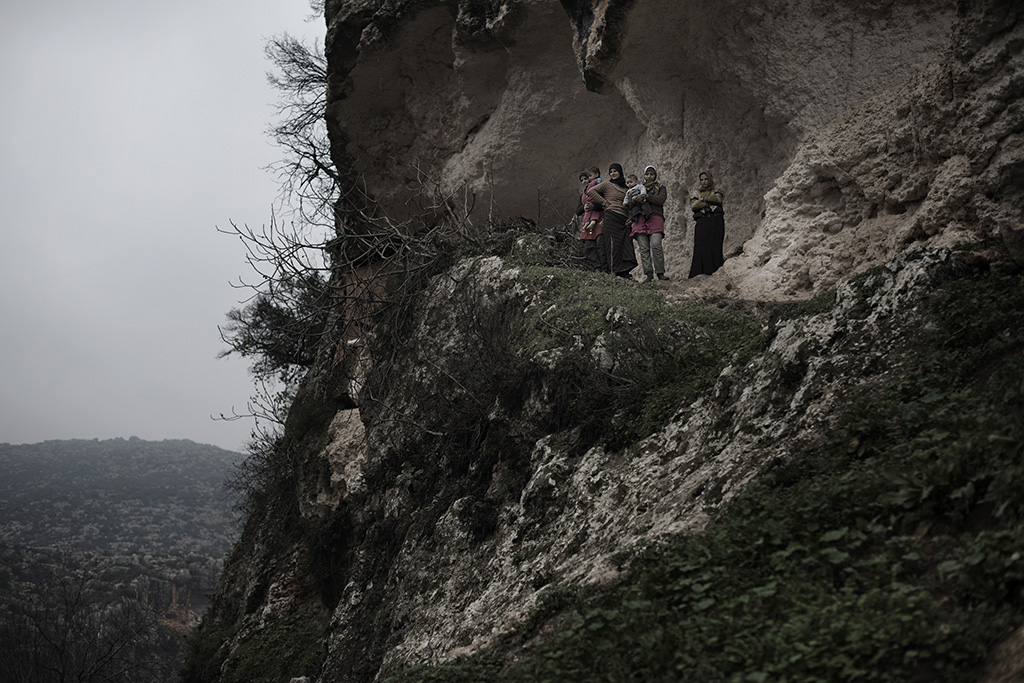 Some Syrian families fled their home in Al-Hamama due to regime shelling and took shelter in caves, in the surroundings of Ain al-Zarka village, January 24, 2013. 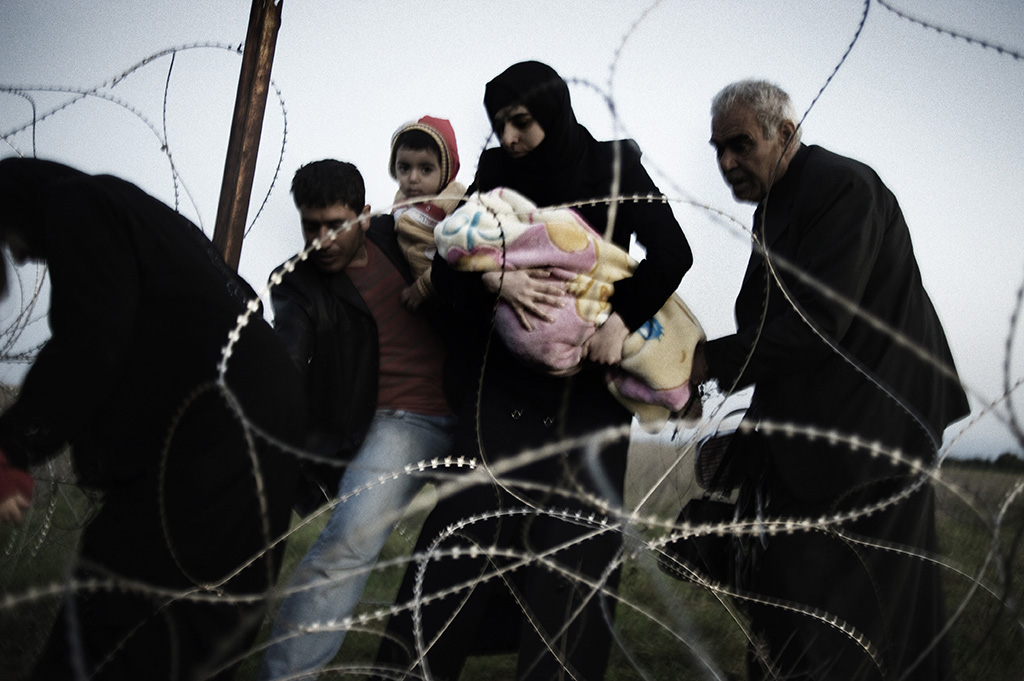 Syrian refugees make their way through barbwire as they attempt to cross the northwestern part of the Syrian border with neighboring Turkey, April 14, 2012, a year after a revolt against President Bashar al-Assad's regime erupted.