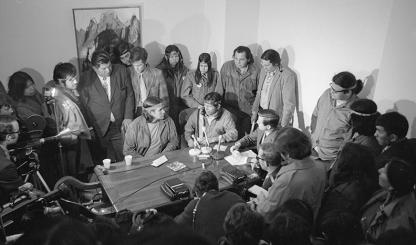 Men arrested in the takeover meeting with Senator Walter Mondale and attorney Larry Leventhal at the federal courthouse.

FE. And at this time you were not working as a photojournalist.DB. No, no I was not being paid. That was one of my advantages. I didn’t have a white editor leaning on me to photograph something for the society pages. No one was telling me where to go except Indians. I was tracking on Indian people wherever they were. First, in the 70’s, it was all localized, on the reservations and in the city. Then in ‘81, the Bellecort brothers said to me, with two weeks lead time, “We’re going to Nicaragua. We’ve been invited by the Sandinistas,” who had just pulled off their revolution in ’79. They invited AIM down. This is typical of the third world struggles. They want each other to know what they’re doing. And the Sandinistas looked at the American Indian Movement as a way to change what was going on in this country, as they were accomplishing in Nicaragua. I didn’t know, when I went to Nicaragua, even where it was on the map. I heard about the revolution only vaguely, in the papers. There was something about a revolution in Nicaragua. Who cares? All of a sudden I was exposed to the way the U.S. Government was operating in Latin America. When I got down there, they had defeated Samoza. Roosevelt had referred to the Samoza’s father saying, “He may be a dictator, but he’s ours.” Those were famous, famous lines of Roosevelt’s.It was fascinating to travel with Clyde and Vernon, two of them, very large, braided, bedecked with turquoise wristlets, going into Indian country in Nicaragua. The Miskito Indian were short and black and spoke some English. These were supposed to be Indians? And they had their own language that Clyde and Vernon did not know. I can remember the Miskito Indians in fits looking at Clyde and Vernon and laughing, because they’d never seen anybody with braids, and this big. Where’d these guys come from, Mars? I mean what are they?The Moskitos had their language and were Moravian Christians. They lived on the Atlantic coast, isolated from the Sandinistas because there was no roads connecting the east with the west. I suddenly got educated about Latin America, exposed to it on the ground. And againmy learning process was not to read about the revolution. I was part of it, in a sense, because I was riding around with a sub-comandante with an AK-47 in his lap. That is not St. Paul, Minnesota.My education just exploded. And again, my photographs, looking back at them, I’m amazed at what I experienced in that one visit, in two weeks time. Then I heard about El Salvador and Guatemala, and I went down with Vernon to Chiapas, Mexico, to photograph the refugees. They were coming across from Guatemala. Over 200,000 Guatemala Mayan Indians had been slaughtered by a government supported by the U.S. and Israel. Rios Montt is still around. He’s responsible for the slaughter of over 200,000 Maya Indians. What’s different, about here or there? Clyde used to say to South American Indians, “You know, we live in the belly of the monster. The monster is now feeding on you, the Central American Indian.”I become caught up by all of the hypocrisy that exists from the dominant power up here, vis a vis Latin America, exercising control by supporting a dictator. We did it in Chile. We did it in, uh, Ecuador. We did it in Guatemala. Uh, we did it in- We tried to do it in Mexico. We did it in Panama. The pattern is still there. It’s still United States foreign policy, with NAFTA economically and with military support for those in power. What happened to me is, I experienced this through the Indian experience. And I became radicalized and changed. 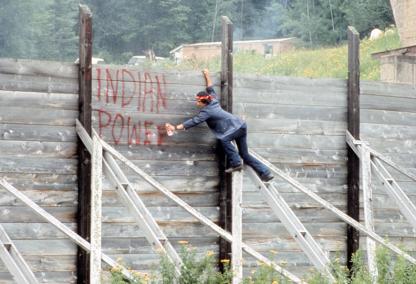 Rick St. Germaine sprays a message on the wall of the dam's spillway.

FE. Were you ever approached by somebody from Russia, from the Soviet Union?DB. No, I wasn’t. Russians were very interested. And they had a Peltier defense committee in Russia. I didn’t go to Russia because it was very short-lived. But I did go on the invitation of Khadafi to Lybia in ’87 and ’88. Khadafi called Native Americans “the red men of North America.” And he invited dissident groups to come to Libya to explain his revolution against the dominance of Italy over Libya. He was quite sympathetic in those years’87 and ’88 – quite different than what he was like later.FE. So you were something between a photographer and a social activist.DB. Well, I became a social activist because of what the Indians taught me directly and indirectly, how they revealed their struggles to me. It started with police brutality and went on in every area. And every time you turn around, they’re, as I said earlier, the last ones to be mentioned as a minority group in this country. And they should be the first. 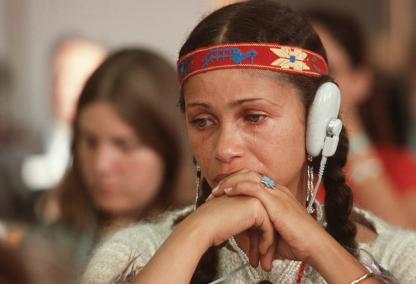 An unidentified women listening to translated testimony on the sterilization of Indian women.

FE. You never sold you photographs. You were just a social activist documentarian?DB. There were two reasons that I was always called by my Indian friends to document their actions. One of them was, I never sold pictures. I couldn’t be accused being in it for the gain or ripping off the Indian community. The second part was that I never approached an Indian woman in any way, shape or manner. I respected the Indian female community. I photographed them, but I never took advantage of the access I was granted. Also, I’m a documentary photographer. My photographs are not posed. I’m not setting up a picture. I go to events and use a telephoto lens and shoot what’s going on, who is there in the public arena. When a picture of mine is published, I ask for a copy of the publication in return for using the picture.FE. So, the book is the first time you put all the images together?DB. It’s the first time. I did a mock-up of the book and I went into the Minnesota Historical Society, in St. Paul, and laid the book out and asked if they’d be interested in publishing this group of photographs? There was no text at the time. And they jumped on it. I was amazed. I didn’t think it was that good, you know? I was also interested in having a text but I want the text to be the voices of those who were depicted in the book. Its not my text. I will just do a short introduction. For the text, I got Laura Waterman Wittstock, who’s a professional Indian journalist, a Seneca from Upstate New York. I got her to do the interviews and to put together the text. So it’s the voices of Indian people though the images were done by a non-Indian. That was very important to me. The History Society was also very eager to do this. Because they knew, and its true, they had neglected the Indian perspective on historical events from way back in the 1800s. They had always published and talked about and shown and done books from the dominant society’s, perspective. 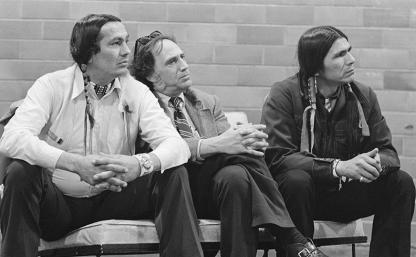 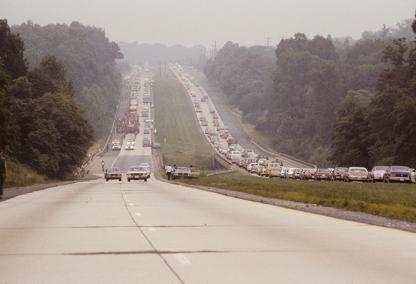 Gawkers slow traffic on the right as the Longest Walk approaches Washington, DC. 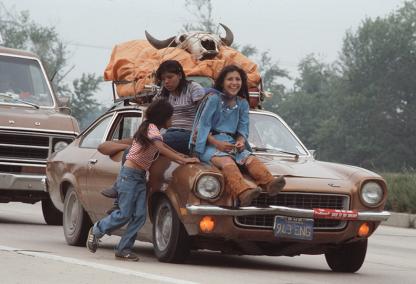 The buffalo skull approaching Washington, DC with help from the youth. 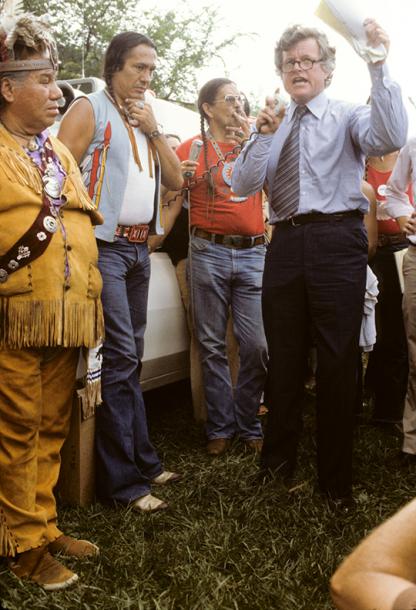 FE. What is going on now with the Indian people?

DB. The struggle is still going on. You’re going to see it this week in the degradation of Indian mascots and nicknames of sporting teams in this country. The use of the term “red skin” for a prominent football team that’s coming to town on Thursday is going to be protested. This is a current issue. And the media is beginning to finally focused on it, though this nickname, mascot issue has been going on for twenty years. But finally they’re talking about it. And they’re raising the awareness that no ethnic group in this country wants to have their slang term – nigger, red skin, savage – depicted with the reverence that we have for athletic teams as a culture.

I think that there has been tremendous improvement in the education of Indian people. There are PhDs and Masters and college graduates all over Indian country now. There are twenty-eight, I think it is, American Indian colleges on reservations producing enlightened, educated, keen minds to confront the environmental issues and the treaty issues that still exist.

FE. Are you a member of the American Indian Movement?

DB. Yep. But that doesn’t mean anything. You know, it’s a movement, it’s a direction. They don’t have formal membership. They don’t have dues. They don’t have a Board of Directors. I do serve on the board of a museum connected with it, where we’re trying to house and organize, books, a garage full of posters, a lot of large format books on Indian subjects. They will all go to this museum. Its called the American Indian Movement Interpretive Center, because some of them don’t like the word museum. We’re trying to build a facility to house the collection.