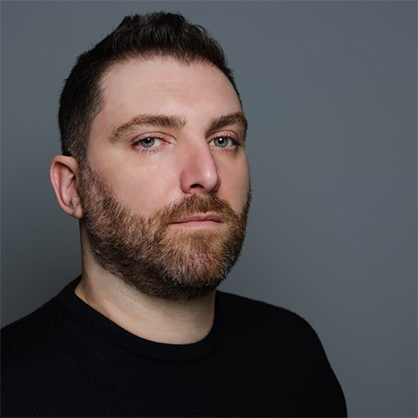 Antonio Faccilongo is an Italian documentary photographer based in Rome. After graduating in communication sciences, and then obtaining a masters in photojournalism, he focused his attention on Asia and the Middle East, principally in Israel and Palestine, covering social, political and cultural issues. Documenting the aftermath of Palestinian-Israeli conflict in West Bank and Gaza Strip, he sought to unveil and highlight the humanitarian issues hidden within one of the world’s most reported conflicts, because too often it is shown only as a place of war and conflict. His long-term projects about women and their families in Palestine, Habibi and (Single) Women, have received several awards and grants including FotoEvidence book award with World Press Photo, Getty editorial grant, 1st prize World Understanding Award at POYi Pictures of the year International, Best color documentary at Gomma Grant, 1st prize at LuganoPhotoDays, 1st prize at Umbria World Fest, 1st prize at Kuala Lumpur Photo Awards, 2nd Prize at PhMuseum and was finalist at Visa D'or feature and shortlisted at Alexia Foundation Grant and Lucas Dolega Grant. His work and assignments have been published in some of the most prominent international publications including National Geographic, Stern, Der Spiegel, Le Monde, Geo, Vice, The Guardian, Paris Match, L'Espresso, Internazionale and many others. Antonio Faccilongo is represented by Getty Reportage.

The title of your new book Habibi translates from Arabic “I love you”. The book is a chronicle of a love story during time of war. Tell us the details.

Palestinian political prisoners and their wives have turned to sperm smuggling and in vitro fertilization (IVF) to conceive children, despite serving long sentences in Israeli jails. The lives of these women are suspended in an eternal expectation of the return of their husbands. In fact, one of the main reasons that pushes these women to do IVF is the desire not to surrender to the condition of imprisonment of their loved ones and to bravely face the diﬃculties of daily life by raising their children alone in a war zone. Since 2014, according to the Razan fertility clinic in Nablus, about 90 babies have been born using IVF. In vitro fertilization is oﬀered free of charge to these women, as their husbands are considered by the community as living martyrs who have renounced their freedom for the homeland. Around 7,000 Palestinians are detained, with nearly 1,000 facing sentences of 20 years or more. Conjugal visits are totally denied and Palestinian prisoners can only see their closest family members through a glass window. Physical contact is forbidden, with one exception. Children under the age of six are allowed a 10-minute meeting with their father at the end of each visit, during which they can embrace their fathers. During these meetings, when oﬀering gifts to their children, the prisoners can insert their seminal ﬂuid into empty pen tubes and hide them inside chocolate bars. This is one of the most used methods by prisoners to be able to conceive new children and perhaps one of the few hopes of having a family for their wives. 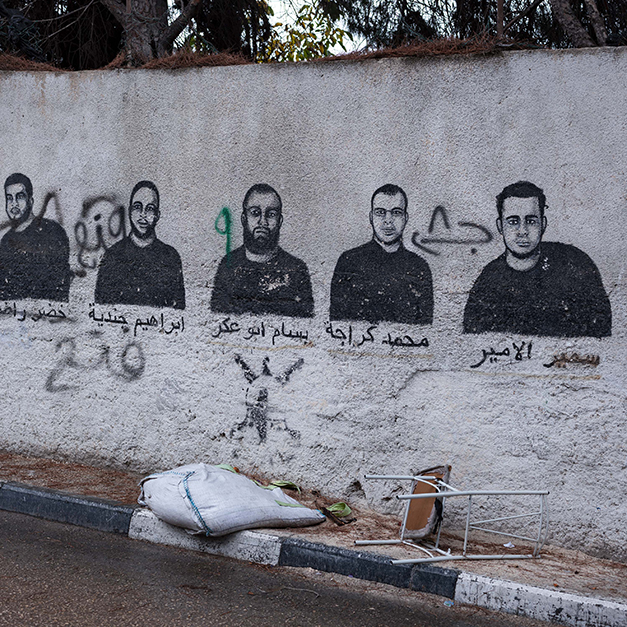 A memorial wall where Palestinian prisoners are depicted. For the Palestinians, the prisoners are not only supporters of the resistance but they are also martyrs in life, and through these commemorations the community tries to honor their memory and their names.

You followed the story of Habibi for five years. How did you hear about the sperm smuggling from Israeli prisons and how did you decide to approach the project?

In 2008, I went to Palestine for the ﬁrst time. As my plane landed at Tel Aviv airport, the bombing of the war began. This round of war would later be called "Operation Cast Lead,” the ﬁrst after the second Intifada. A bloody 22-day lightening war in which more than 1,300 people died. The violence I witnessed in those days deeply affected me. Once I got home, I continued to follow the developments of the conﬂict and found that a very large number of men in the Palestinian refugee camps had been arrested. I have asked myself several times what the absence of these men within this community meant and what consequences it could have on the balance of families who already live in a contested territory. So I went back to Palestine to meet them and tell some stories of their daily life, their experiences and their feelings. The story that most affected me emotionally is the one told in Habibi. A story that I discovered by being in contact with the families of prisoners and getting to know them over the years.

Photo: Antonio Faccilongo Ramallah, Palestine.
A boat handmade by the prisoner Ahed Abu Gholmeh for his son Qais. Ahed is serving a life sentence in prison. It is common among inmates to make handmade items to donate to their loved ones during family visits to prison.
Photo: Antonio Faccilongo 2015-07-30 Bethlehem, Palestine:
: A pen tube containing sperm of one of the prisoners hidden in a chocolate bar. While kept physically separated from visiting spouses and adults, inmates can play with their children for ten minutes at the end of each session. During these short visitations, some of the men pass the to their children, one of the methods used to smuggle their seminal fluid out of prison.
Photo: Antonio Faccilongo 2015-01-25 Tulkarem Palestine
Amma Elian (40) is the wife of Anwar (40). He was arrested in 2003 and sentenced for life imprisonment.
By Antonio Faccilongo
Habibi
Svetlana
Bachevanova

You have followed the life of Lydia, a Palestinian prisoner’s wife whose son Majd Rimawi was conceived by IVF, since he was an infant. Was it difﬁcult to be allowed to photograph such intimate moments in the Rimawi family? How did you gin their trust?

One of the most signiﬁcant experiences I have had in making this work was sharing the exhausting journeys to reach the prisons on the day the wives visit their husbands. Thanks to the Prisoner's club, an NGO that assists prisoners and their families, I got in touch with some of the prisoners' wives. In one of these trips I met Lydia Rimawi together with her son Majd. I will never forget Lydia's consoling embrace on the bus. A hug full of love but also of strength and protection, of a proud woman who faces life with pride. I was touched by that gesture, delicate and strong at the same time, and by everything it meant for her, as for all the other women, who ﬁnd themselves having to raise their children alone. At ﬁrst Lydia was afraid to speak to the press for two main reasons. First of all because it was not known how Israel would react to the birth of these children and what consequences there would be for them and the prisoners. And also because she needed time to trust me. The relationship of trust with the Rimawi family changed after meeting with Lydia's brother Mazen, with whom I established a friendship and esteem that allowed me to be accepted.

You have been in contact with some of the long term prisoners, the fathers. What is their motivation to participate in a IVF insemination? Some people see it more as a political act rather than an act of love. What is your opinion?

In my opinion, what prompted these families, prisoners and wives, to have new children is mainly the desire to carry on the family unit and not to surrender to the difﬁculties of the political and social context. A balance between a feeling of reaction to the political situation and the sweetness with which a man and a woman decide to carry out their feeling of love by giving birth to a child. Furthermore, the Palestinian people keep alive the hope of a resolution of the conﬂict with the positive prospect of reuniting with their family one day. Palestine is too often shown only as a place of war and conﬂict, full of contrast, soldiers, military actions and weapons. Habibi shows the impact of the conﬂict on Palestinian families. I felt the need to tell the realities hidden behind the conﬂict that best help us understand the meaning of living in that place, and at the same time restore dignity to the people who live there.

How has the political situation changed in Palestine since you started working on Habibi and do the changes effect the development of your project?

Unfortunately, in recent years, developments in international politics, such as the recognition by the United States of Jerusalem as the capital of Israel, have only exacerbated the situation, blocked dialogue and made both peoples more frightened. The wall that separates the two peoples every day becomes thicker and taller. In addition to being trapped, people can no longer hear the voices of those on the other side. This situation meant that many of the prisoners' families were afraid of being witnesses in my work. The conditions make people feel that they have to protect themselves from others and that exposing themselves could have negative consequences. Initially, I was disoriented and did not know how to handle the story but, over time, I understood that telling stories that show the normalcy of everyday life is especially important in trying to restore the interaction of people back to normal levels. 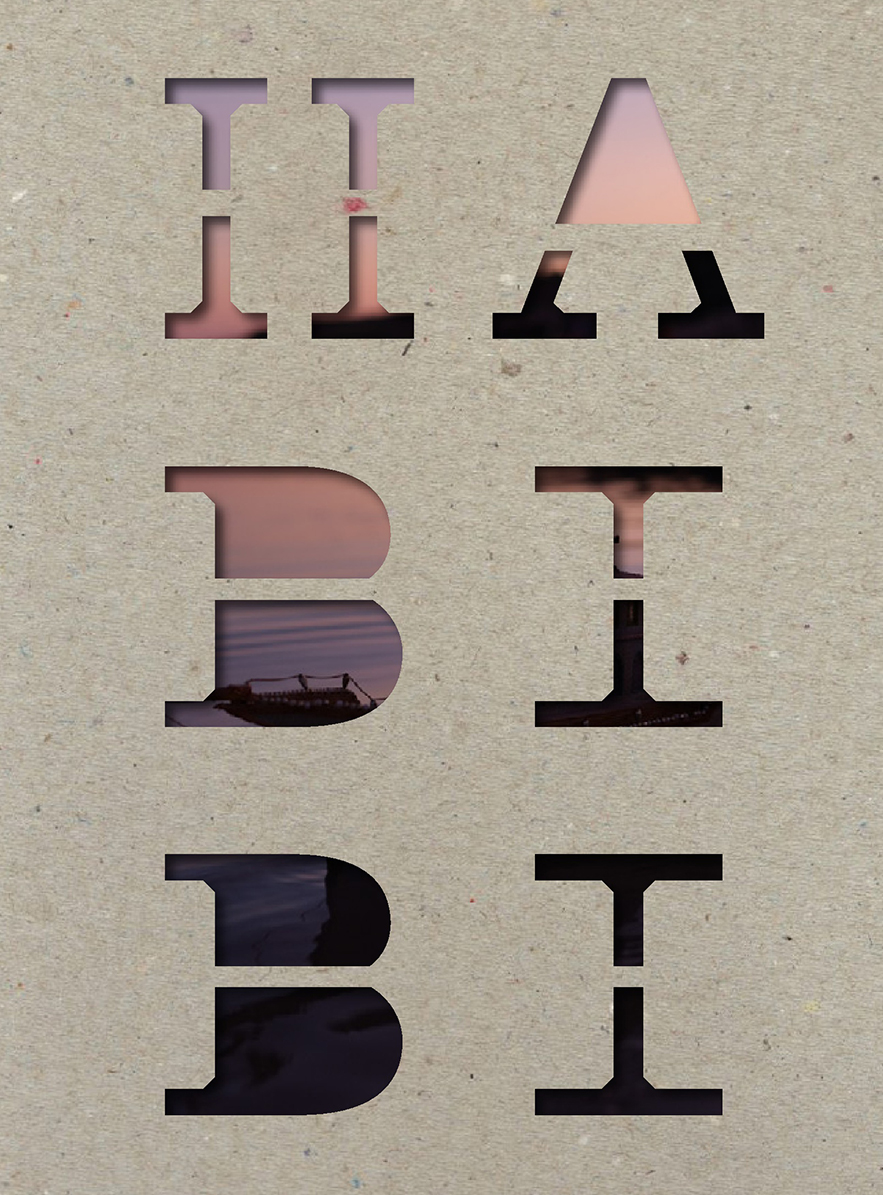 2020
by Antonio Faccilongo- Winner of the 2020 FotoEvidence Book Award

HABIBI is the winner of the 2020 FotoEvidence Book Award with World Press Photo. The Book Award is given each year to a photographer whose work demonstrates courage and commitment in the pursuit of human rights. The project was selected to be published as a book by an international jury. HABIBI, is a chronicle of a love story set in one of the longest and most complicated contemporary conflicts, the Israeli-Palestinian war. It follows families in Palestine with men serving long sentences in Israeli jails, who smuggle sperm and use in-vitro fertilization to have children....