Born in 1987 in Lisbon, Portugal Mario Cruz studied Photojournalism at Cenjor - Professional School of Journalism.In 2006 he started to cooperate with LUSA – Portuguese News Agency / EPA – European Pressphoto Agency. Since 2012 he’s been focused on his personal projects:- “Recent Blindness” - Winner of Estacao Imagem 2014 Award- “Roof” - Winner of Magnum 30 Under 30 Award- “Talibes, Modern Day Slaves” - Winner of World Press Photo 2016- Contemporary Issues - 1st Prize Stories; Winner of POYi 2016 - Picture of the Year Internacional - Issue Reporting Picture Story; Winner of Estacao Imagem 2016 Award and finalist for the 2016 FotoEvidence Book Award.His work has been published in Newsweek, LENS - New York Times Blog, International New York Times, CNN, Washington Post, El Pais, CTXT.es and Neue Zürcher Zeitung.His book Talibes Modern Day Slaves was published by FotoEvidence Press.Your book “Talibės Modern Day Slaves” tells the story of young boys subject to slave like conditions in some of Senegal’s Quranic schools.  How did you discover this story?In 2009, I was in Guinea Bissau when I first heard stories about children that were disappearing. Back then people thought that they were being taken to be slaves probably in Senegal.  Although these testimonies were full of doubts the stories stayed on my mind.  So I went back to explore what was happening with these young boys and the trail led to the Quranic schools in Senegal. 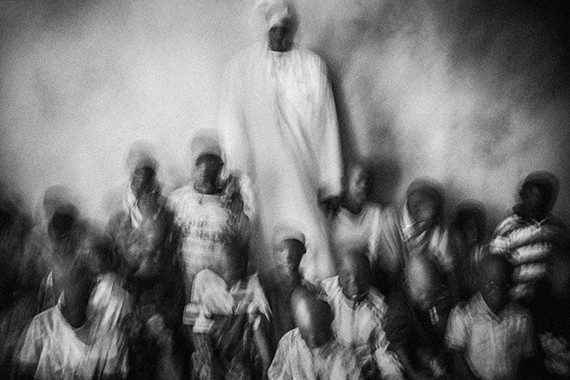 A marabout with his talibes in a Koranic school in Keur Massar, Senegal, May 25, 2015.How did you become a photographer and what motivated you to work on the talibė project?My father was and still is a photographer, so the camera was always near me. To be honest, I didn't feel immediately interested in photography. I got my first camera when I was 12 years old but it was only when I reached the age of 16 that I was truly overwhelmed by the depth of photography. Even more than that I was really interested in expressing what I felt and what I was seeing around me through photography.The “Talibés Modern Day Slaves” project came naturally after I did my first two personal projects. To get to a subject as the talibés a serious process was necessary as a photographer and the previous projects were essential to break down barriers that I had and realize that time is essential to create powerful and meaningful visual documents.My main purpose is always the same: bring attention to realities that are hidden or ignored. When I started investigating the talibé situation I realized the lack of proof allowed the continued subversion of a teaching tradition. At that moment, I was sure that photography could and should have an important role in revealing what was really happening in so many false Quranic schools. 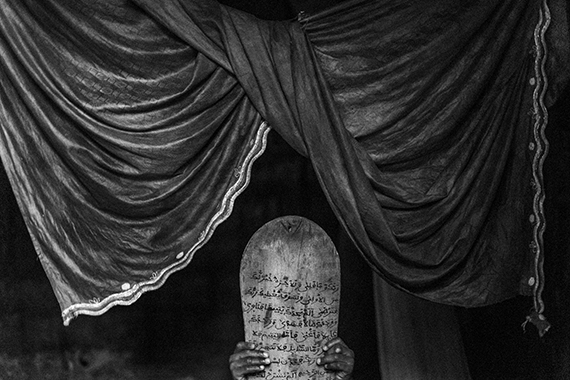 A talibe holds a Quran slate used for learning verses and practicing calligraphy inside an daara in Rufisque, Senegal.How did you gain the rare access to some of those daaras where talibės are subject to abuse?I did an intense research for six months. I contacted numerous NGOs both international and local. One of those Senegalese organizations was fundamental to gaining the access that I needed to have the evidence of the atrocities that thousands of children suffer every day.  This organization already had permission to enter in some of these forbidden places to provide some assistance to the children, so they were my ticket to get in. I wasn't allowed to photograph the children, only the "schools.”  Obviously, I ignored the restrictions and many of the photographs were captured under some serious risk, without the consent of the so-called guardians but there wasn't any other option. 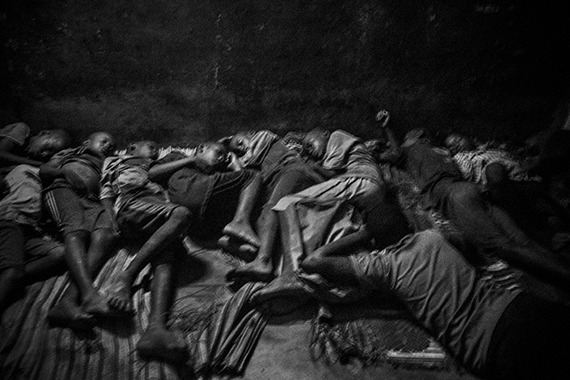 Talibes sleep together inside a daara in Saint Louis, north of Senegal, May 21, 2015. The daara with over 30 children has no clean water and barely no electricity. Children sleep on the concrete floor without any protection.What did you discover there?I saw boys between five and 15 years old being whipped and beaten by their teachers. The younger ones are shackled by their ankles to stop them from trying to run away.Many of them are crying, many of them are silent, but they all tremble with fear.They are forced to beg for an average of eight hours a day to collect three to four dollars for their guardians. It's impossible for all of them to meet this quota. They know that and they know what that means: punishment.A to Human Rights Watch there are more than 50,000 boys living under these conditions in Senegal.   After years of suffering, many talibės run away and end up living on the streets where they are susceptible to other abuse.Often, parents send their children to Quranic schools because they believe they are a good option.  Sometimes it is the only option for the poorest families. Nevertheless, child trafficking plays a crucial part in the large numbers or boys in the daaras.The exploitation crosses regional borders without little or no control. 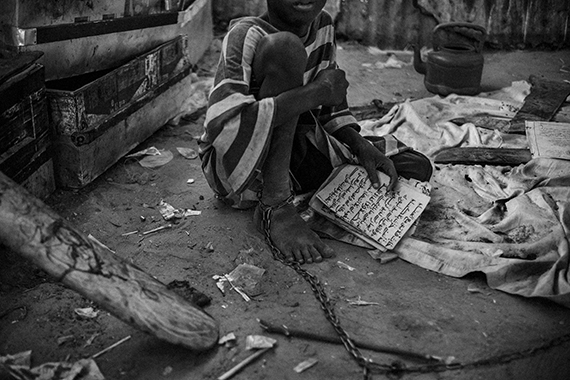 A young talibe bound by chains in an isolation area of a daara in the city of Touba, May 27, 2015. In this daara the youngest talibes are shackled by their ankles to stop them from trying to run away. The chains length only allows them to use an improvised bathroom in a separate area of the daara. These children can stay like that for days, weeks, even months until they gain the marabout's trust. Their guardian explains " When I release them, I give them the freedom to beg like the rest of the Talibes".Are there particular personal stories that you heard from the children that inform your story?Every time I talked with a talibė, I tried to incorporate his testimony into the narrative of the work not only of what was happening but, also, his feelings. I talked with many talibės who fled their daaras.  They told me about the abuses that they suffered, even when they brought back the money required by their teachers.I remember one particular testimony from Amadou, a 15 year old boy, who had been a talibė for a long time. I found him by the shore of Senegal River in Saint Louis. He was with a group of talibės who have chosen the streets instead of the daaras. He didn't know who his parents were or where he came from. I looked at him and I didn't see a teenager. His hands were roughened and his eyes were lost in despair. He told me that he wasn't afraid of death anymore. 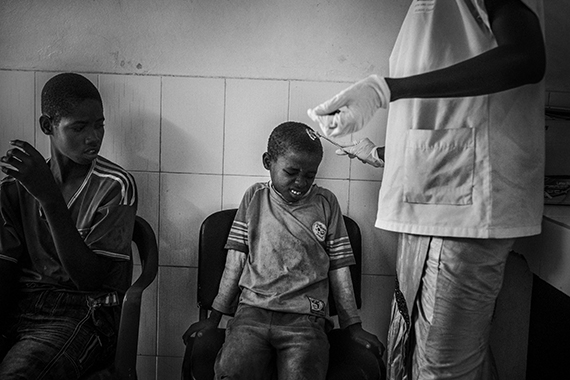 Amadou, 12, receives medical assistance at Mason de La Gare center, in Saint Louis, Senegal, May 21, 2015. He was beaten with a whip by his marabout. Amadou has been receiving treatment since 2014.Your photographs provided Your photographs provided visual evidence in the fight against the abusive daaras?  Who did you first show them to? Where were they first published?The photographs provided the evidence that was missing for many years. Many of the reports I read during the research pointed out some of the abuses that I ended up photographing but little appeared to have been done to stop them.The first person that saw my work was my girlfriend Patricia who's a stringer photographer for AFP. I was in Senegal by myself and she had a very important role during the entire process. I didn't want to share the images with anyone or any organization before they were published. For me it was really important to show the evidence step by step, in order to create a really strong revelation process. I am grateful to Newsweek for publishing the work, from where it spread to several different platforms. It was an extremely effective publication.What kind of reaction did you receive about the work when you won the World Press Photo award for social issues, this year?Actually the World Press Photo announcement came 24 hours after the Newsweek publication. The reaction was very positive and brought exactly what I was looking for: attention to the talibé reality.It was a surprise to most people because it was a subject, in a way, unknown. And I was really glad to feel  people’s desire to know more about it.  Naturally, the fact that the work earned recognition from World Press Photo helped the work to be shared globally and to spark discussions from one day to the next.Was there a response from the government of Senegal at that time?Yes. To be honest I never thought about such a strong and quick reaction. They asked me if they could use the photographs to show in public sessions and in flyers that are being distributed on the streets of Senegal.I truly believe the access to information is key towards change. The initiative from the Senegalese government and presidency is very important but I wanted to do more and so the idea of the book gain even more strength with the help of FotoEvidence.The book will be in schools, libraries and local associations both in Senegal and in Guinea-Bissau one of the countries that suffers most from child trafficking. 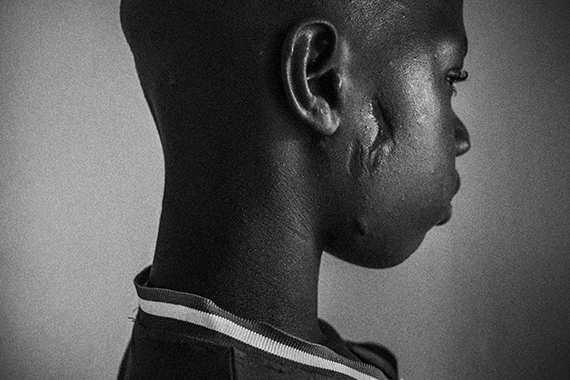 Demba Fati, 14, outside the medical support room of Mason de La Gare center in St. Louis, Senegal, May 20, 2015. His marabout beat him with an iron rod after he tried to escape. Since then he goes to the center whenever he needs medical care.Marcelo Rebelo de Sousa, the President of Portugal came to your book launch in Lisbon. How did that feel?  What did he say to you?It was an honor. The President Marcelo Rebelo de Sousa has a very unique way of communicating. Although, diplomatically it is hard for him to take a stand about this subject, he dedicated his words to the power of journalism and its importance in every society.  Finally he said that the “Talibės Modern Day Slaves” was the example of what photojournalism can achieve. It is without any doubt a day that I will never forget.The President of Senegal has now responded directly to your images by calling for the registration of all Quranic schools in the country. It appears that your work may help change the lives of many talibės. Have they also changed your life? The environment in which the talibė children live is completely different from the environment in which I grew up. I understood since the first day that I would be their voice and that gave me a responsibility that I still carry. That feeling changed me in a way difficult to describe but it also gave me the final push to believe that I should continue to do what I set out to do when I studied photojournalism: document realities that deserve our attention and that without photography could not be seen. 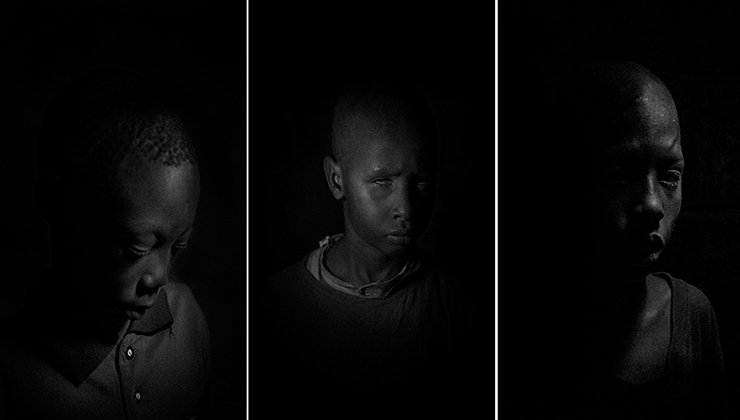