ONLY IN JUNE- OPEN DOORS FOR BOOK PROPOSALS

The Board of Directors of  FotoEvidence Association each undertakes a balance of responsibilities divided between strategic direction, governance and fundraising. 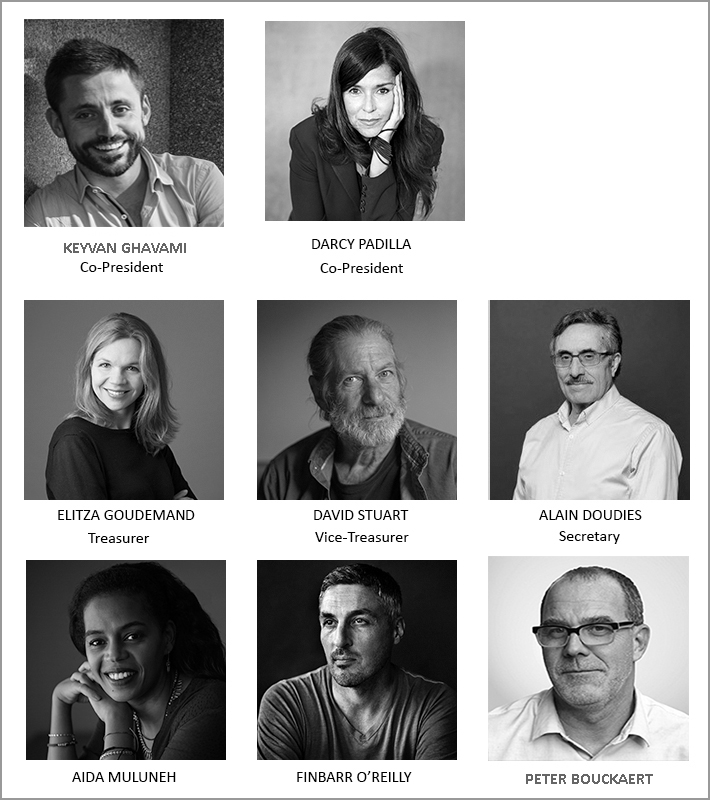 Keyvan Ghavami earned his BA in Political Science from the University of Lausanne and his MSc in Development Studies from SOAS in London. His former professional experience includes positions with Human Rights Watch and the impact investment fund Impact Finance Management. Keyvan currently serves as the Director & Cofounder of Act On Your Future, a non-profit foundation based in Geneva that works to strengthen and foster civic engagement among the next generation of socially active youth. He is also a specialist in financial innovation at UNICEF, helping the organization implement innovative financing mechanisms to unlock private capital for social good. Keyvan is a Geneva Committee Member of Human Rights Watch, NEXUS Switzerland Outreach Ambassador and a Global Shaper of the World Economic Forum.

Elitza Goudemand holds a BA in Business administration from the American University of Paris and an MBA from the INSEAD Business School.  Her professional experience includes different positions in the financial services sector: Back office manager at Access Capital Partners in Paris, Risk Officer at GE Capital in London and Investment director at ACG Capital in Paris. Since 2017 Elitza works for a language travel company La Route des Langues and advises her clients on different study abroad programs around the world.

David Stuart is a co-founder of FotoEvidence. He is a sociologist with a dedication to human rights that began as a teenager at the United Nations International School in New York. In a previous incarnation, he was a founder of the Freelance Players (now Rehearsal for Life) an educational theater organization in Boston. As the Executive Director of the Disarmament Action Network, he spent six years working with over 100 organizations to mobilize opposition to US military and foreign policy. He spent eight years with the Boston College Media Research and Action Project, designing and analyzing research on the mass media and political discourse and consulting to social movement groups. During this period he helped initiate United for a Fair Economy, an organization focused on income inequality.  He has managed political campaigns and worked as a consultant to business, social movement and non-profit organizations.

Born in Ethiopia in 1974, Aïda left the country at a young age and spent an itinerant childhood between Yemen and England. After several years in a boarding school in Cyprus, she finally settled in Canada in 1985. In 2000, she graduated with a degree from the Communication Department with a major in Film from Howard University in Washington D.C. Muluneh has won the European Union Prize at African Photography Encounters and the CRAF International Award of Photography. In 2020, Muluneh was given the Award for Photographic Curatorship of the Royal Photographic Society. Aida is the founder and director of the Addis Foto Fest (AFF), the first international photography festival in East Africa.

Finbarr O’Reilly is the 2020 Laureate of the Prix Carmignac and the 2019 Nobel Peace Prize exhibition photographer. He is a regular contributor to The New York Times. He won the First Place Portraits category at the 2019 World Press Photo Awards for his photograph of Senegalese fashion, and earned the premier World Press Photo of the Year in 2006 for his image of a mother and child in Niger. Finbarr O’Reilly is the co-author of Shooting Ghosts A U.S. Marine, a Combat Photographer, and Their Journey Back from War (2017, Penguin Random House), a unique joint memoir written with U.S. Marine Corps Sgt. Thomas Brennan and based on their experiences under fire together in Afghanistan.

Peter Bouckaert is a human rights activist, lawyer and philanthropist. He is currently the director of the Astra Foundation. After graduating from Stanford Law School, Bouckaert served for 20 years as Emergencies Director for Human Rights Watch, during which time he worked extensively with photojournalists to document war crimes and violations of human rights.  He also serves on the board of the New Humanitarian.

Since 2008, Dimitri Beck has been the director of photography at Polka magazine, gallery and factory in Paris. Prior to working at Polka, Dimitri was the Director of the Aina Photo Agency based in the Afghan capital Kabul, where he was also the Editor-in-chief for the Anglo-French feature magazine "Les Nouvelles de Kaboul – News of Afghanistan.” Before he was working as editor-in-chief of Reza Deghati’s photo agency “Webistan”. Dimitri also lectures on photojournalism at the journalism department of SciencesPo Paris and at the international photo school Speos. He participates in international photo juries and for many years hosted a weekly radio program on photography at France Info, one of the key French news stations.

With a background in fine arts, photojournalism and psychology, Maral Deghati has 20 years of practical working experience in photography, education and the media, spanning Europe, Asia and Africa. Deghati is a photo editor and educator in photojournalism with extensive field experience. In 2014, she was the founding editor-in-chief for Me-Mo magazine, a new media interactive magazine of documentary photography. Programmer for the WARM Festival in Sarajevo (2014-2018) and educator for various masterclasses and degrees in documentary photography. She speaks English, Farsi, French, Arabic, and Spanish. She is currently Managing Editor for Getty Images EMEA.

James Whitlow Delano is a Japan-based documentary storyteller. His work has been published and exhibited throughout the world and led to four award-winning monograph photo books, including, “Empire: Impressions from China” and “Black Tsunami: Japan 2011.” His work has received the Alfred Eisenstadt Award (from Columbia University and Life Magazine), Leica’s Oskar Barnack, Picture of the Year International, NPPA Best of Photojournalism, PDN and others for work from China, Japan, Afghanistan and Myanmar(Burma) and many other countries. In 2015, he founded the EverydayClimateChange (ECC) Instagram feed, where photographers from six continents document global climate change on seven continents. ECC documents how climate change is not happening “over there” but it is also happening right here and right now. Delano is a grantee of the Pulitzer Center on Crisis Reporting.

Alice Driver is the author of” More or Less Dead” and the translator of “Abecedario de Juárez” by Julián Cardona and Alice Leora Briggs. She is based in Mexico and writes for National Geographic,Time Magazine, and Oxford American where she has worked with photographers Tamara Merino, Luján Agusti, Jerome Sessini, and John Stanmeyer.
Driver has a Ph.D. and MA in Hispanic Studies from the University of Kentucky, and she studied Spanish and Portuguese at Middlebury College Language Schools. She is the recipient of grants, fellowships, and funding from National Geographic, the Economic Hardship Reporting Project, the Overseas Press Club, Foreign Policy Interrupted, and Images and Voices of Hope.

Tanya Habjouqa is a Jordanian-Texan visual artist, educator, and a member of NOOR Images. Habjouqa’s approach to visual storytelling fuses a mordant sense of irony with unstinting, forensic interrogations of the implications of geopolitical conflict on human lives. Trained in anthropology and journalism (MA: Global Media, SOAS, London), her work on Palestine-Israel has been cited as a powerful investigation of the cross-currents of politics, economics, religion, and cultural production. She is a mentor in the acclaimed Arab Photography Documentary Program. Her book “Occupied Pleasures” has received critical acclaim from TIME and Smithsonian magazines and she won a World Press Photo award for the project. Habjouqa is in the permanent collections of the MFA Boston, Institut du Monde Arabe, and Carnegie Museum of Art.

Michael Kamber is the founder and executive director of the Bronx Documentary Center. He has worked as a journalist for more than 25 years. Between 2002 and 2012, he worked for The New York Times, covering conflicts in Iraq, Afghanistan, Liberia, the Sudan, Somalia, the Congo, and other countries. His photographs have been published in nearly every major news magazine in the United States and Europe, as well as in many newspapers. In 2011, Kamber founded the Bronx Documentary Center, an educational space dedicated to positive social change through photography and film. Kamber is an adjunct professor at Columbia University. He is the winner of a World Press Photo award among many others.

Régina Monfort is a photography and book editor. Her own photographic work, focusing on issues pertaining to youth, cultural identity and social stigma, has been widely exhibited in the United States and in Europe. Her photographs are in the permanent collections of the Brooklyn Museum, the Library of Congress, the New York Public Library and the Yale Art Gallery among others. She is a member of the American Photography Archives Group.

Nadezhda Pavlova is a Bulgarian visual artist, curator and educator. She teaches Photography at the Bulgarian National Academy of Fine Arts with particular focus on the history of photo books in Bulgaria. Nadezhda is chief curator at Synthesis photography gallery in Sofia, exhibiting work from international photographers like Martin Parr and Fabio Bucciarelli. She is a member of the Association of Art Critics AICA.

Ramon Pez is a creative director and curator based in London and Mexico City. He focusses on experimental projects where stories and narrative structures across platforms. From 2011 to 2013 he was the artistic director of COLORS magazine (Art Directors Club Award 2012 & 2013, USA). He currently oversees art direction at Thames & Hudson in London (UK) and recently co-founded a publishing project in Mexico City called INFRAMUNDO. Alongside these jobs, he lectures, does workshops and curates exhibitions (Les Rencontres d’Arles 2016, 2018, France).