The Islamic State of Iraq and Syria or the Islamic State of Iraq and al-Sham (ISIS) is a Salafi jihadist militant group that follows a fundamentalist, Wahhabi doctrine of Sunni Islam. Derived from its Arabic name ad-Dawlah al-Islāmiyah fī 'l-ʿIrāq wa-sh-Shām, the group is also known under the acronym Daesh.While ISIS claims to be the real purveyor of Islami, many other Muslims blame them for diverging from Islamic practice and introducing a brutal Islam.ISIS attracted jihadis from all around the world even from non-Islamic countries.Since 2013 the group has controlled vast landlocked territories in Iraq and Syria where it enforces its form of Sharia law. Estimates of the population living under the ISIS regime range between 2.8 million and 8 million people. A UN report estimated a total of 15,000 fighters from over 80 countries in ISIS' ranks as of November 2014. US intelligence estimated an increase to around 20,000 foreign fighters in February 2015, including 3,400 from Western countries.The execution of captives, military use of children, sexual violence and slavery, beheadings and mass executions, destruction of cultural and religious heritage sites, and the use of chemical weapons are some of ISIS’ most brutal crimes during the war in Syria and Iraq. 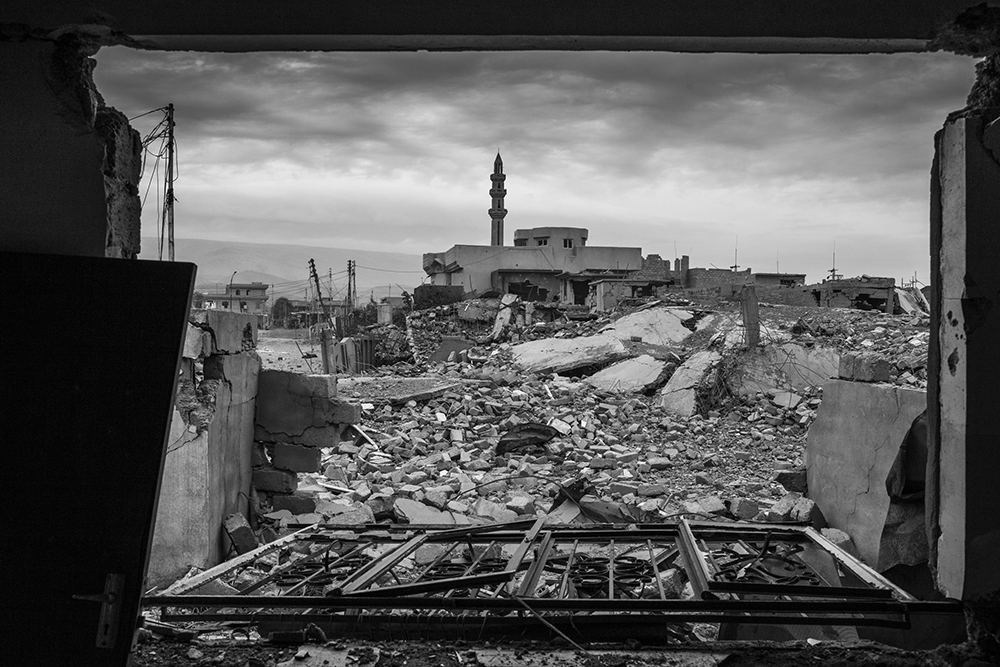 A mosque in Sinjar city after successful operation to retake the city by Peshmargah and coalition forces. 16 Nov 2015, Sinjar, Mosul, Iraq. From August, 2014 through November, 2015 Sinjar was occupied by ISIS.  This is a strategic city, situated on the main route between Mosul and Raqqa. A large number of tunnels and booby traps were discovered after freeing the city. Many people trapped in the city by ISIS during the occupation were tortured, raped or traded in a slave market. 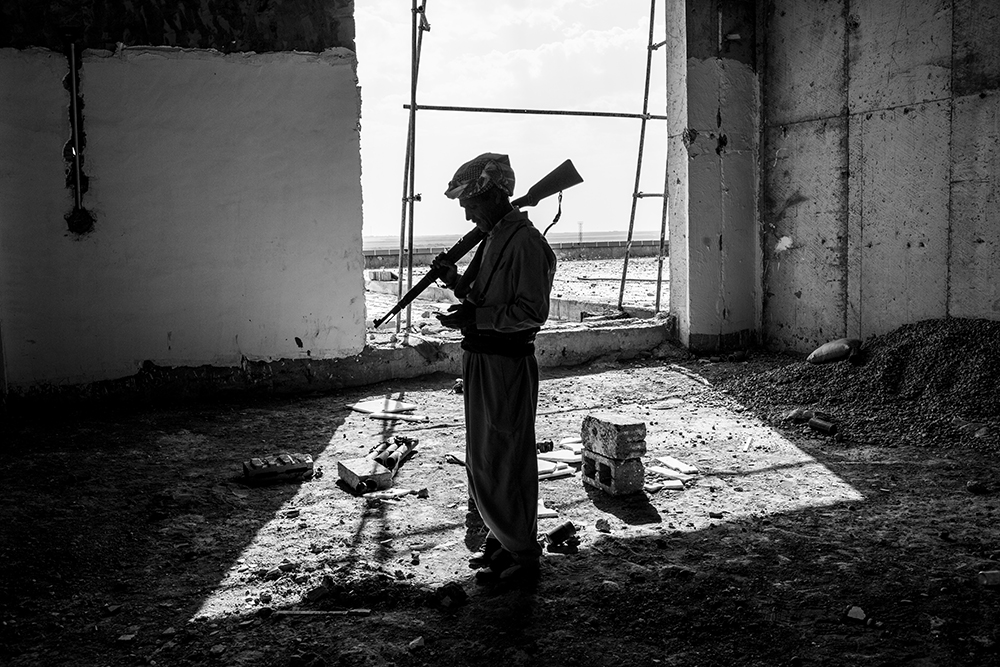 A volunteer Yezidi Peshmergah in an unfinished hospital building tries to call his family, after liberating Rabiaa. 5 Oct 2014, Rabiaa, Mosul, Iraq. Rabiaa is an official border crossing between Iraq and Syria. ISIS had control over this city for two months until the Peshmergah forces, with coalition support, liberated the city. Liberating of Rabiaa was the most important step before liberating Sinjar. 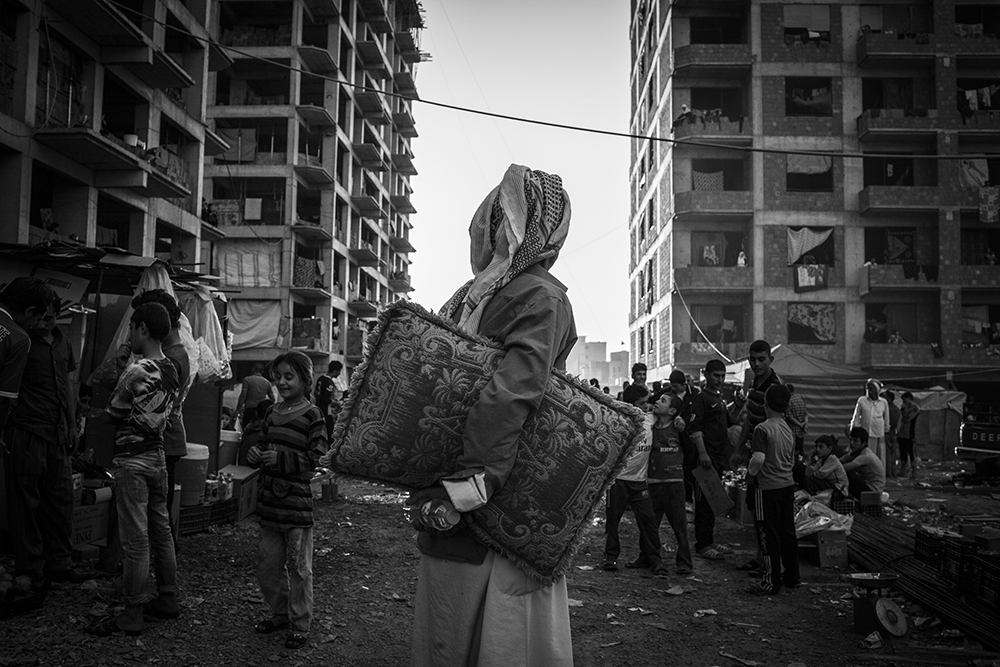 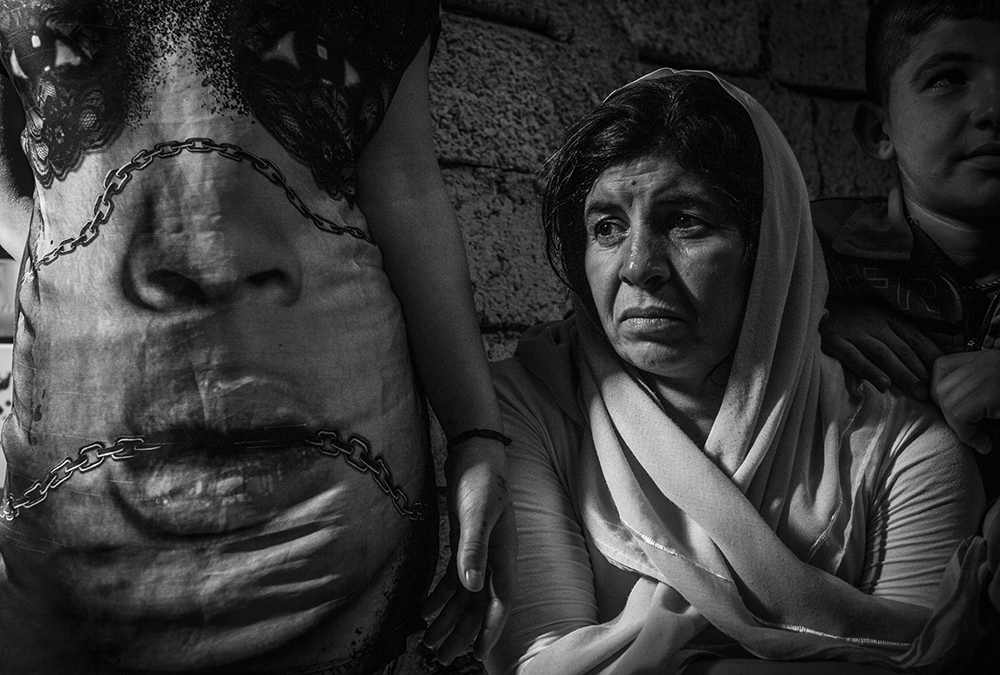 A Yezidi woman is living with her family in an unfinished building in Sharia city, Dohuk. She and her family survived ISIS and escaped to a Kurdistan Regional Government (KRG) area. 3 Oct 2014 Sharia, Dohuk, Iraq. During IS attacks on Sinjar and Yezidi minority villages around Sinjar in Aug 2014, they separated men and women and children, murdered the men, used women as sex slaves and used children under 12 years old as soldiers after indoctrinating them with ISIS ideology. 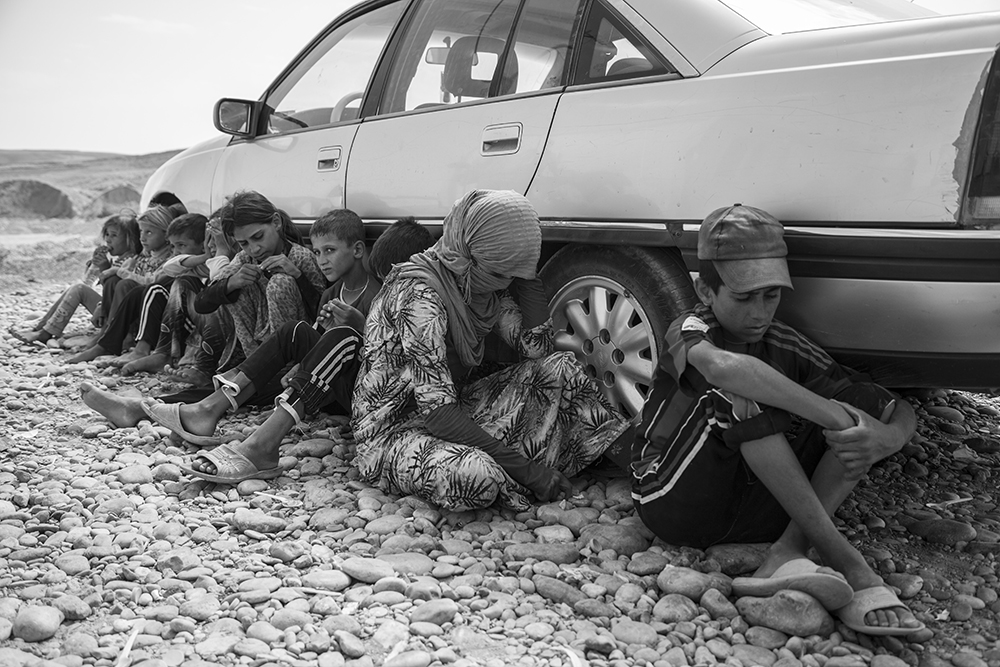 A Kurdish Yezidi family arrive at the Syria Iraq border, after surviving eight days surrounded by ISIS and walking more than 35 kilometers in Syrian territory.  They are waiting to find or hear information about other members of the family they haven’t been able to locate. 18 Aug 2014, Sohaila, Dohuk, Iraq 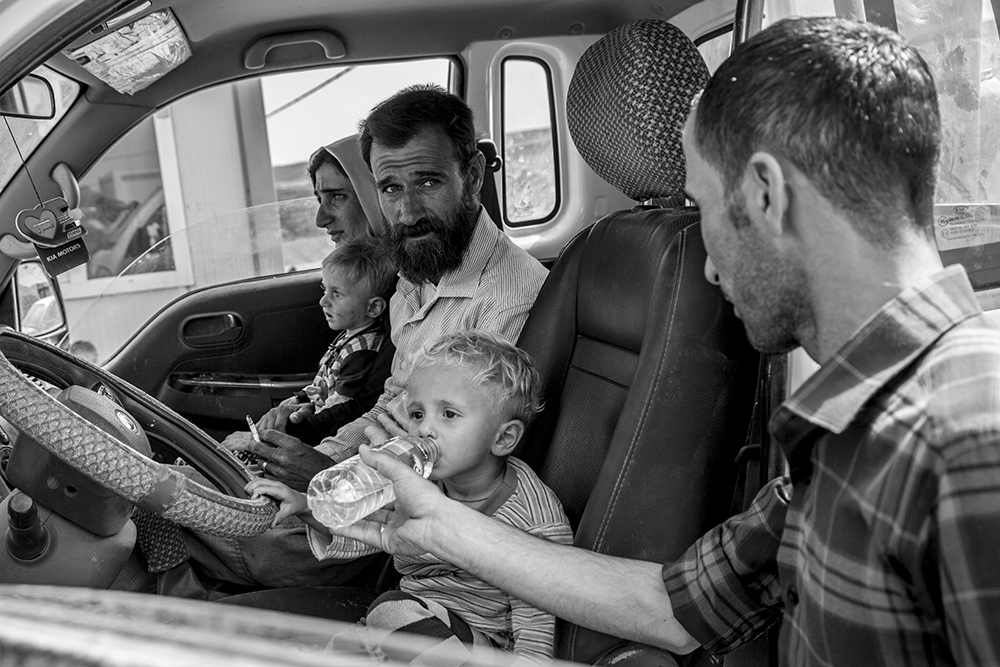 A Kurdish Yezidi family arrive at the Syria Iraq border, after surviving eight days surrounded by ISIS and walking more than 35 kilometers in Syrian territory. People were welcoming refugees by distributing food and water. 18 Aug 2014 Sohaila, Dohuk, Iraq. More than 40,000 Kurdish Yezidis were surrounded by ISIS for eight days without food and water, during the hottest days of summer. 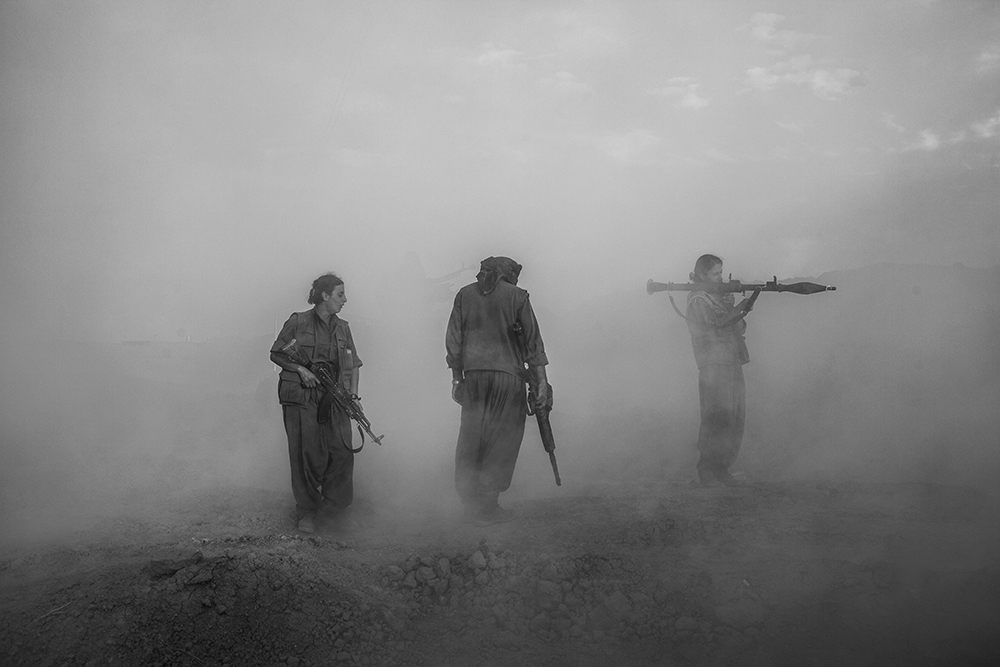 Some of PKK fighters are posing for foreigner photographers in the misty weather of winter. After ISIS attack in August, 2014 on the KRG forces of Iraq, all Kurdish fighters from Iran, Turkey and Syria gathered to fight against ISIS. They acted as support forces for Peshmargah in regions like Sinjar, Makhmour and Kirkuk. 23 Oct 2014, Daqoq, Kirkuk, Iraq 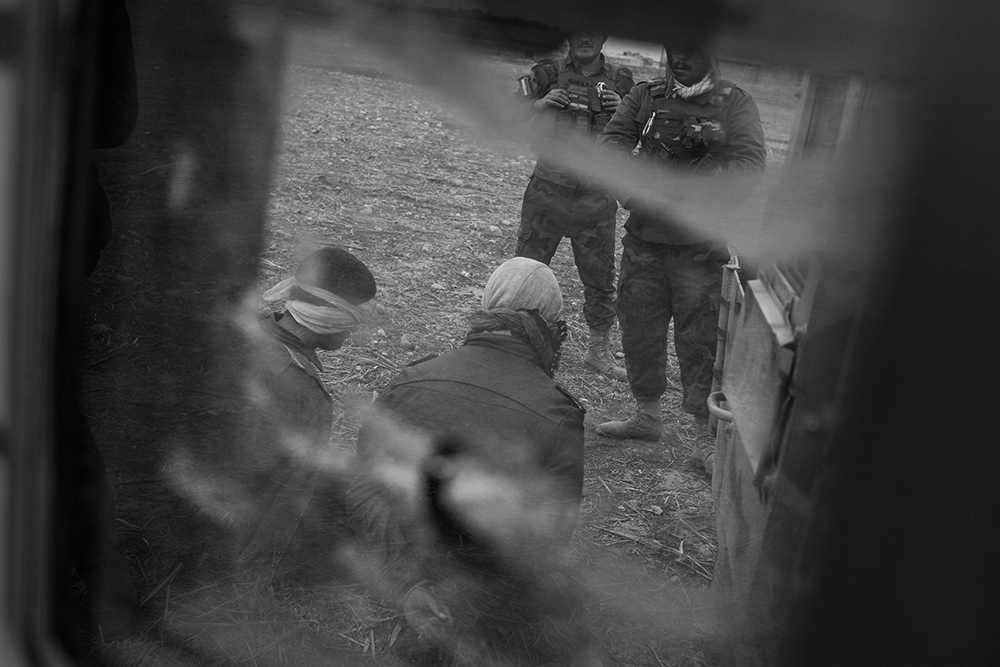 Two Tal-Afarian suspects arrested by Peshmerga forces will be held for further investigation over their identity and possible plans. 16 Nov 2015, Sinjar, Mosul, Iraq. There are rumors about Tel-Afarian youth having joined ISIS and being involved in the mass murder and other abuses of Yezidi people. 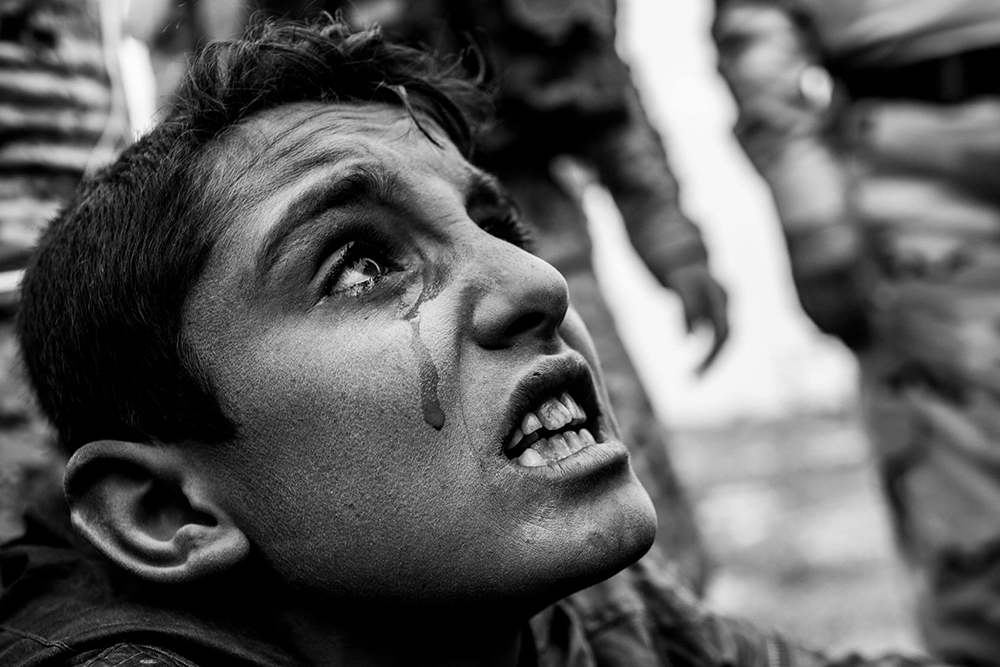 A boy crying  over his sister’s body, killed by an ISIS sniper as they tried to escape from their village (Mahana) to the Peshmargah frontline. 26 March 2016, Makhmour, Mosul, Iraq 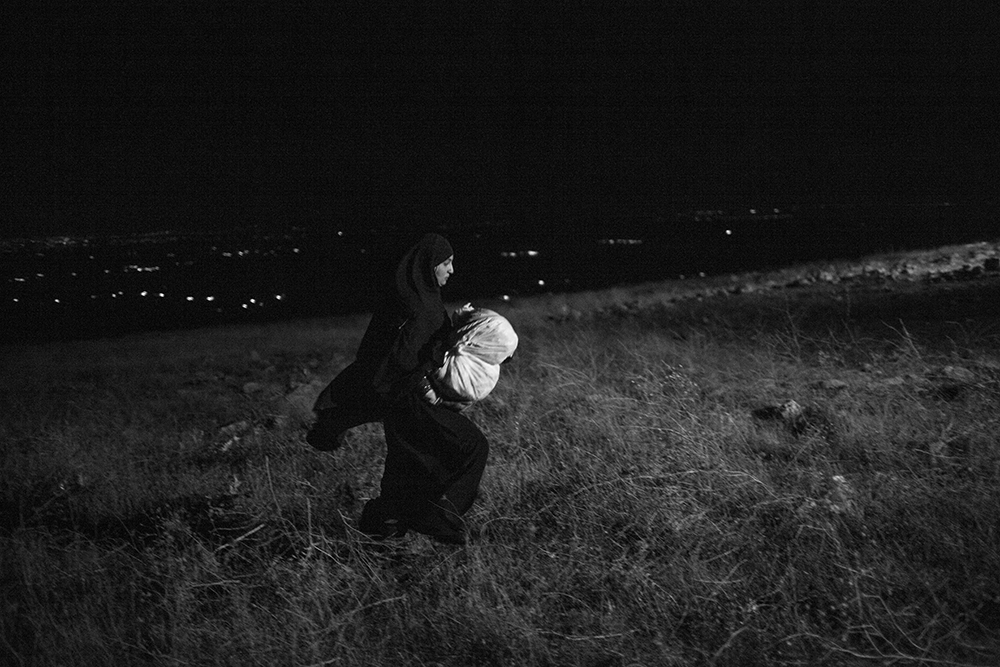 A young woman just arrived at the Peshmargah frontline at Bashiqa hills after running away from Mosul and walking for six hours through an ISIS controlled area there full of IED`s and other dangers. 8 August 2016, Bashiqa, Mosul, Iraq