Valerio Bispuri was born in Rome in 1971 and after graduating in Literature he decided to devote his attention to photography. A professional reporter since 2001, he collaborates with numerous Italian and international magazines, among them L’Espresso, Il Venerdì, Internazionale, Le Monde, Stern. He has carried out reportages in Africa, Asia, Middle East, but it is in Latin America that Valerio worked the longest and he has lived in Buenos Aires for more than a decade.He worked on “Encerrados” for 10 years, a long term photographic project on the life conditions in 74 prisons across all the countries in the South American continent, describing with an anthropological and journalistic approach, the inmates’ reality. This work has been exhibited at Visa pour l’Image in Perpignan, at the Palazzo delle Esposizioni in Rome, at the University of Geneva, at the Browse Festival in Berlin and, in October 2014, at the Bronx Documentary Center of New York. In November 2014 “Encerrados” became a book edited by Contrasto.In 2015, Valerio finished another important photographic project that lasted for over 10 years, denouncing the diffusion and the effects of a new low-cost drug called “Paco” that is killing an entire generation of youths in the suburbs of large South American cities. The work on “Paco” has been exhibited in Rome, Milan and Istanbul (catalogue published by International Green Cross).He has been awarded numerous international prizes: Latin American POY 2011, Sony World Photography Award 2013 (1st prize Contemporary Issues); Days Japan International Photojournalism Awards 2013, the 2014 POY (2nd prize, Feature Story Editing – Magazine) and a finalist of the 2014 FotoEvidence Book Award.You spent ten years and visited 74 prisons in South America for your first book Encerrados. Your second book, “Paco,” about the devastating social effect of a new drug Paco, known also as “the poor man’s drug” in Argentina is coming soon. For this investigation you spent another eight years. What attracts you to this very dark side of South America?Paco is a project that lasted 14 years, from the very beginning to the last photos taken this year. I believe that the job of a photo reporter is to investigate the dark sides of the world, the aspects that we know little or nothing about. It takes time to deep dive into a story. I have chosen Latin America because it is an area of the world that I feel closer to my strings and that I believe is still mostly unknown. The Arab world or Africa are fascinating places and cultures but too far away for me, I would always be only a spectator, even after years. 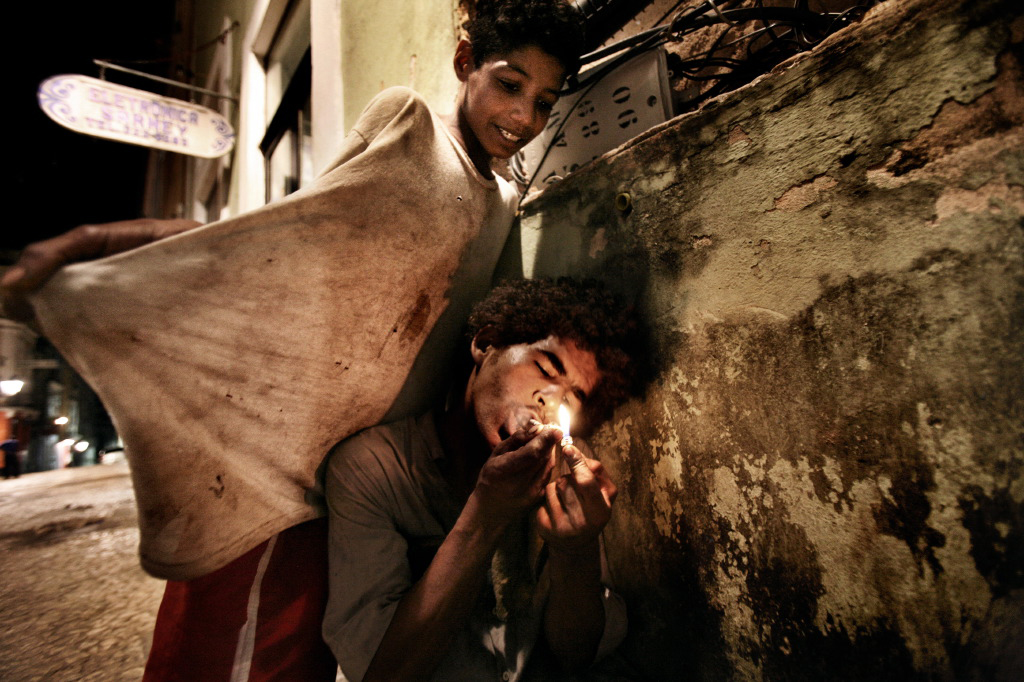 Salvador de Bahia, Brazil 2009. José and Kaio steal, live and smoke Paco every day in the Pelurinho alleys.What is Paco and how did you learn about it? Why did it become so important for you that you dedicated eight years to this project?Paco is the acronym of Pasta Base di Cocaina and it is the waste of cocaine, the part that was first thrown away by drug traffickers. In Argentina, after the economic crisis of 2001, traffickers decided to recycle and sell it at very low cost. I believe that through Paco one can tell the story of all the drugs in the world, but above all what it is possible to describe a part of the Latin American society. Paco is, similarly to Encerrados, an anthropological work on man and society. To fully understand what Paco really is and what's around it, to enter the world of Villa (favelas) it took a long time, 14 years.You had unprecedented access. In one of the images you are in an underground laboratory for Paco production. How did you do it? Did you have someone on the inside?Getting into the paco kitchens wasn't easy, it cost me two years of work. At first I tried to see if I could enter in "official" ways, asking the drug traffickers but they didn't even receive me. I was able to do this thanks to the contacts I had with a small NGO from Lomaz de Zamora with whom I worked for years. The day I was able to get into a Paco kitchen was a Sunday when Boca River football match was being played in Argentina. That match is followed by everyone, including drug traffickers. To get to the kitchens I was blindfolded. When I arrived, I found myself in front of a shack, in an unpaved street where a family lived, underneath there was a garage with two people who were preparing the Paco. I stayed for about 7 hours in that garage, after a while my throat and eyes were burning from acids and I was constantly scared that someone could hear me: I was alone and I didn't even know where I was. 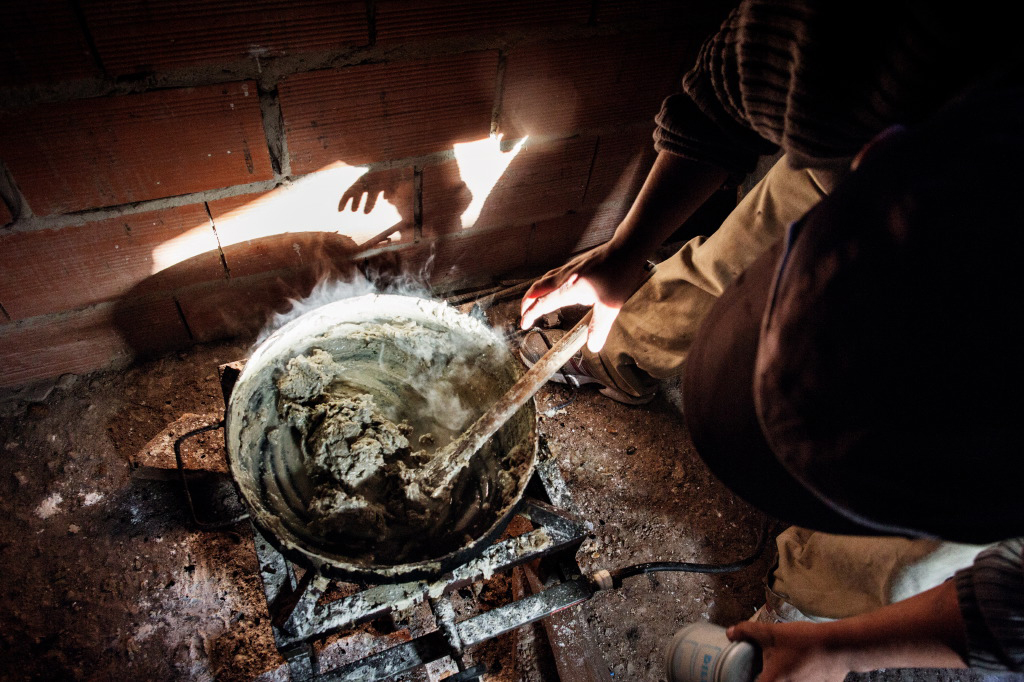 Buenos Aires, 2015, The "kitchen" where Paco is prepared.Did you develop a personal relationship with some of the subjects you followed through the years?Of course I have developed personal relationships, in 14 years I would say that it would be impossible not to do so. Relations with all the people who helped me to get to know and photograph Paco and with many of the children who consume it. Some of them unfortunately have died in the years. I remember Darìo, the brother of Ezekiel, son of Mary. I've known him for years. He was taking Paco for years. He died at age 23 under mysterious circumstances. It seems that somebody stabbed him. 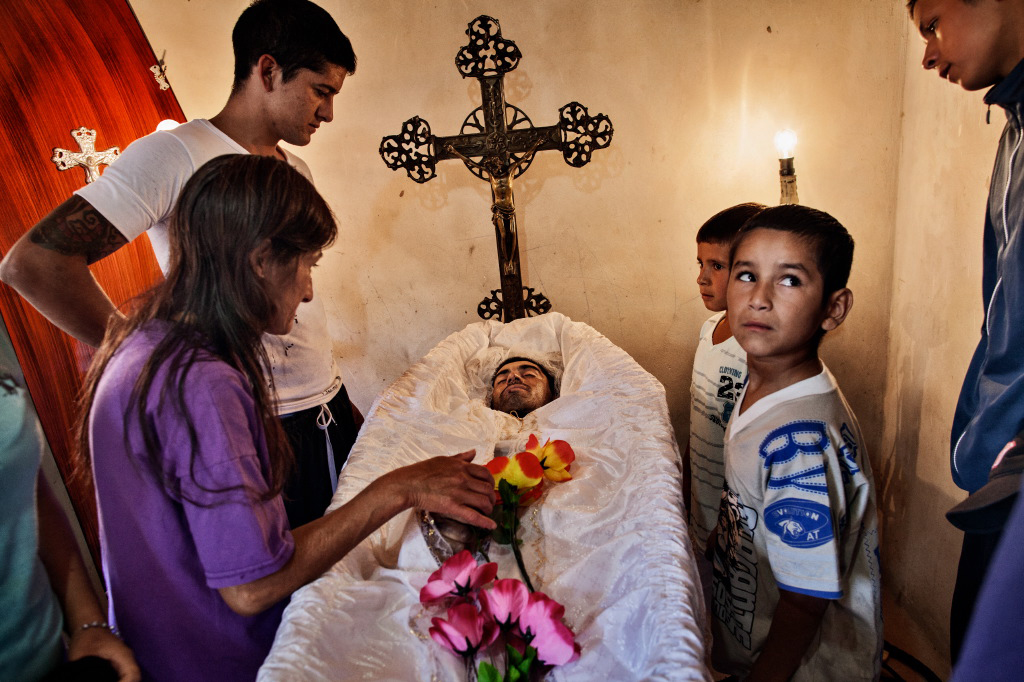 Buenos Aires, 2010, Maria cries over her 23-year-old son, Dario, who died of Paco one morning at Lomas de Zamora.Why did you decide to publish Paco in a book? Did this decision influence your work on the project? Tell me more about the process?I think that the work of a long reportage is really over when you publish a book. A book represents something that remains, something definitive that is not an exhibition or publication in a newspaper.In the book there are  a few images taken after the exhibit of Paco last year at Visa Pour L’Image. Why did you return to Argentina to shoot these few images for the book? What was missing? In the book there are 12 new photos that have not been exhibited in Perpignan. I came back to Argentina because I wanted to insert a last chapter of the story, the one about the guys who try to get out of the dependency of Paco, in most cases unfortunately without succeeding.After years of documenting Paco you developed signs of possible post-traumatic stress disorder. What did you witness there?No one has helped me, the only disorder I have had is chronic insomnia, which I do not know if it is due to Paco or Encerrados or other works. It is certainly not easy to live in a state of continuous emotional stress. 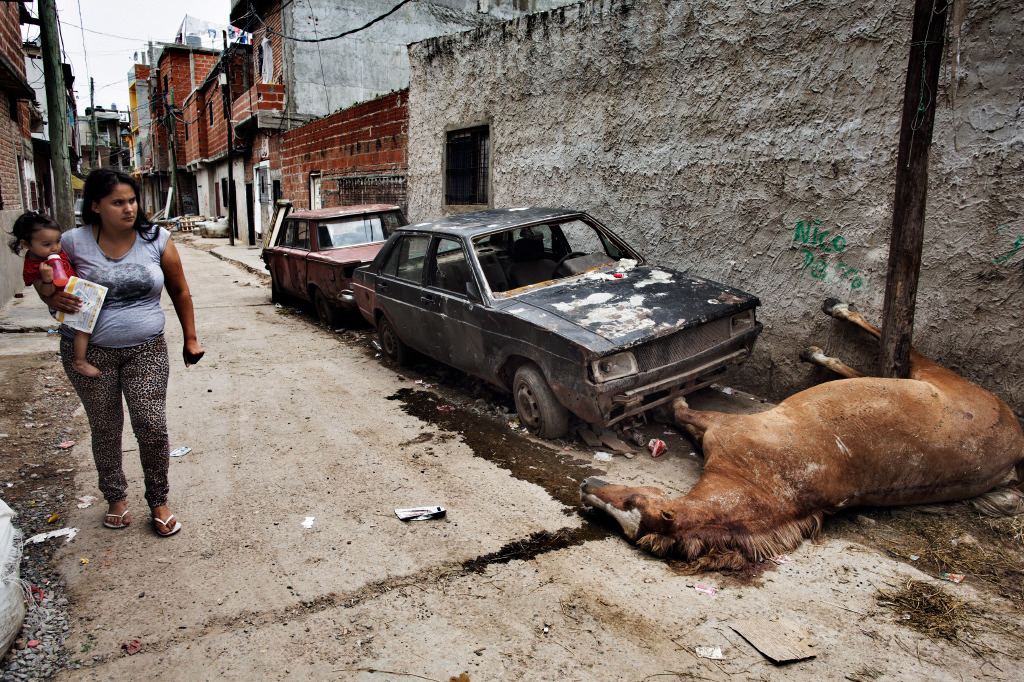 Buenos Aires, 2015. A villa in Lugano where a horse was killed during the night in a clash between drug traffickers.You are a self-taught photographer. Why did you choose this path? Who influenced you most?I'm almost self-taught, I did a brief photography course just after school when I was 18 years old. What fostered my growth were the curiosity, the desire to understand and, above all, to tell. The need to be able to explore and investigate the world. Then there are authors who have influenced me for their ability to describe the reality and their emotions, two above all: James Nachtwey and Josef Koudelka.You have a definite post-production color palette for this project, tell me about your choice and why?I personally take care of the post production of my works with the help of Claudio Palmisano who knows my work and style perfectly. I like to mark the colours and contrasts. I believe that the post-production constitutes the style and poetics of an author though it is key never to alter the reality that has been photographed. 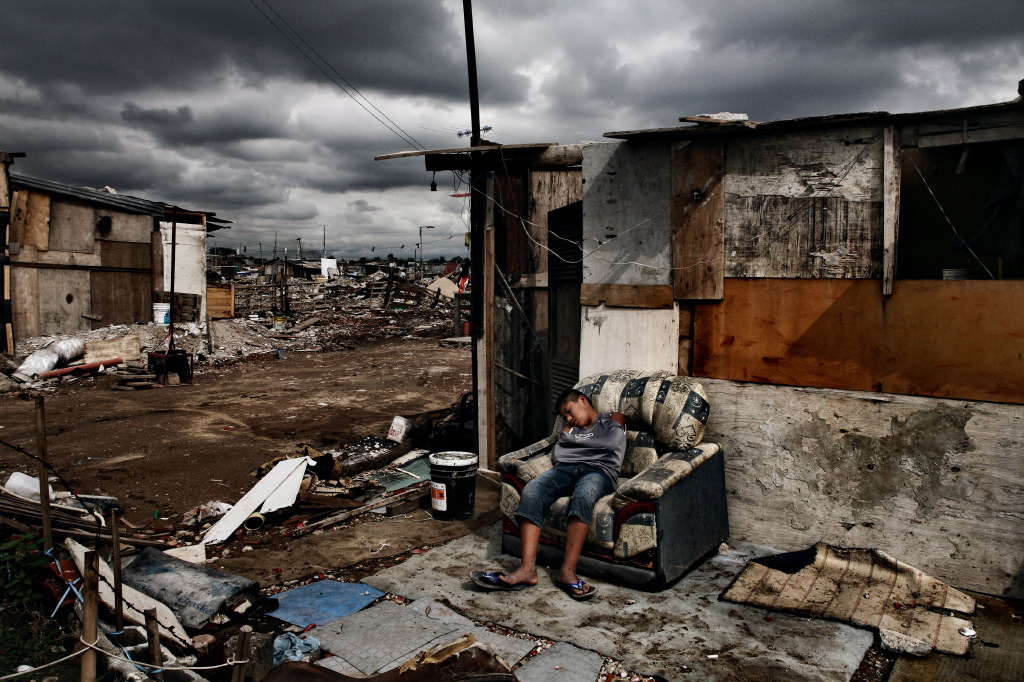 Buenos Aires, 2010, a boy sleeps on an armchair in November 17 camp, known as Campo Tonghi, on the periphery of the capital.

How can the book “Paco” influence some changes in Argentina to minimize the number of young victims from this devastating drug? Are changes possible?

When you start a new project there is always hope is that it will contribute to change something. With the pictures of Encerrados I was able, together with the help of Amnesty International and the Argentine government, to close a terrible pavilion in the Mendoza prison in Argentina. With Paco I hope to be able to shed light on this devastating reality that is destroying thousands of young people with the idea that something concrete can be done to help them.

The book is available for purchase here.