Stephen Ferry was born in Cambridge, Massachusetts, USA. His father, David Ferry, is a respected poet and translator, and his mother, Anne Ferry was a scholar of English literature. At the age of 12, Stephen began to hang around the Ferranti - Dege camera store and lab, where he learned to develop and print.Since the late 1980s, Stephen has traveled to dozens of countries, covering social and political change, human rights, and the environment. He has worked extensively in Eastern Europe, Northern Africa, and the Middle East, while always returning to the subjects that he finds important, whether or not they are in the headlines.A fluent Spanish speaker, Stephen has developed an understanding of Latin American culture, society and politics from over 20 years of covering the region. He currently is based in Bogotá and recently produced, Violentology: A Manual of the Colombian Conflict, published by Umbrage Editions. Available at: http://www.umbragegallery.com/blog/titles/newandforthcoming/violentologyStephen's work has received numerous prizes and honors in the World Press, Picture of the Year and Best of Photojournalism contests. He has received grants and fellowships from the National Geographic Expeditions Council, the Ambassador's Fund for Cultural Preservation, the Fund for Investigative Journalism, the Alicia Patterson Foundation, the Howard Chapnick Fund, the Knight International Press Fellowship, the Getty Images Grant for Good grant, the Open Society Institute and the Magnum Foundation Emergency Fund.Stephen teaches documentary practice at the Fundación para un Nuevo Periodism Iberoamericano (FNPI), in Cartagena, Colombia, and at the International Center of Photography in NYC.DS. You engaged with photography at an early age. When and how did you decide that your passion was for documentary photography?SF. Two things came together for me when I was quite young, around the age of twelve. I had the good luck to live near this photography story and lab called Ferranti-Dege, in Cambridge, Massachusetts, and the owners kindly put up with my curiosity and helped me learn how to develop film there.At the same time, Cambridge was a center of protest against the Vietnam War and all around me were protests and debates. The war was a matter of huge concern for my family also, and I learned about all that by looking at LIFE magazine which came to my family's house every week. The same iconic images in LIFE that moved the nation also affected me deeply at that age. Those two influences led me to seek a career in photojournalism.DS. What was the first project you worked on with a social purposeSF. When I moved to NYC, in 1984 after college, I had a day job but on the weekends I documented the life of a flamboyant figure called Adam Purple, who was squatting in a tenement on the Lower East Side of NYC. The city wanted to evict him to build low-income housing, so the issue pitted a group of hippies who supported Adam Purple against housing advocates and city planners. It was colorful and complicated.DS. I notice you call your work “non-fiction photography”. What do you intend with this label?SF. I think it is a way for me to bridge the terms 'photojournalism', which to me implies short-term work on assignment, with 'documentary photography" which implies much longer time spans. Since my work tries to combine the two, I sought a different name. Plus I work on subjects that sometimes seem stranger than fiction, so I want to be clear that they are real stories, not made up by me. 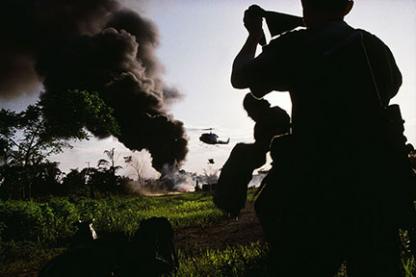 Soldiers guard the perimeter as Colombian Army helicopters ferry in equipment and technicians to repair a length of the Caño Limón-Coveñas pipeline destroyed by guerrilla sabotage. The Caño-Limón oil field is shared between the Colombian state oil company Ecopetrol and the Occidental Petroleum Corporation based in the United States. In 2002, the US Congress approved a special package of 98 million dollars in military aid directed to the XVIII Brigade in Arauca to defend the pipeline. DS. What drew you to live in Colombia, a society torn by conflict for years?SF. As a journalist I was naturally drawn to a situation which has severe effects on millions of people and which was barely known outside of the country. It seemed incredible to me that this war, which has produced almost 4 million displaced people, should be so little understood. And I work better in situations when I am not among many other journalists, that is, when the 'story' is not in the international headlines. 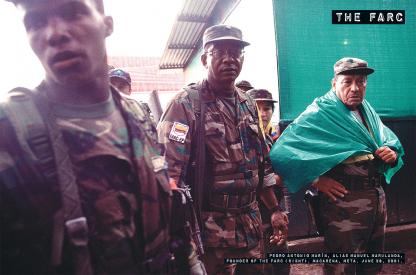 DS. How has being an expat contributed to your work and your career as a photojournalist?SF. Another motive for moving to Colombia in the year 2000 was the need I felt to really immerse myself. I had come from many years of traveling from country to country on assignment and I wanted to deepen my practice by looking at one situation over time. Colombia is also a fascinating country, with many facets beyond the war, an extremely rich country in cultural terms, with great music and literature. So, I feel I have learned so much from living here that I wouldn't have if I was just coming in and out on short trips.DS. Does you life and work in Colombia give you a particular perspective on the gun debate now raging in the United States?SF. The US and Colombia have a lot more in common that meets the eye, including a history of violence, that in the US case is manifested in the many wars we are involved in, some justified and others not. Both countries support and celebrate a warrior ethos, often with terrible consequences for civilian bystanders.DS. Your book "Violentology" poses the question, why does a culturally and resource rich country like Colombia suffer continual violent conflict? What has your camera revealed about this question?SF. The answers are complicated, but one thing that Colombia shows is the importance of the rule of law, of a justice system that works. There has been such a history of impunity for crimes committed in Colombia that most murders go completely unpunished. Also, the economy and society tend to repress poor people and maintain a stratified, exclusive system that engenders great resentment. I think Colombia may be an extreme case of a disturbing phenomenon seen around the world: that peasants, those who actually grow the food we eat, are looked down upon as lesser people. It is a contradiction because the very people who grow food we all need are despised by society, which is largely indifferent to their fate. Land is a central issue in Colombia, with large cattle farming and single crop agribusiness interests consistently displacing the small peasant from the land, often through violent means. Though they claim to fight for the peasants, the guerrillas too often displace peasants to consolidate control over certain zones. 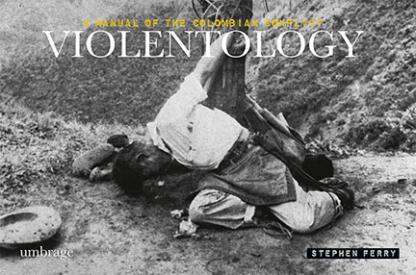 DS. What has been the response to "Violentology" in Colombia?SF. I am very gratified by the response. Thanks to a grant from the Open Society Foundation I have been able to take the work to numerous schools and universities, to hold conferences and exhibits. The level of interest and dialogue with the students and general public has been amazing. This is the first work of its nature here in Colombia and people express a great interest in the book as a resource.DS. You chose to print "Violentology" on newsprint, giving it both a feel of reliable reportage and ephemera (but perhaps no more ephemeral than the digital imagery coming to dominate photojournalism). What did you intend by this?SF. Violentology is printed on "Bulky" paper, which references newsprint but is heavier and has a beautiful texture. The book was printed on a newspaper rotary press. In part, the reasons were conceptual, a way to honor the central and courageous role that the Colombian press has played in investigating atrocities by all actors. I also wanted the work to have an enduring, substantial presence that the web does not allow for. For me, the experience of holding a work, engaging it with the hands, turning the pages slowly, is very different than the experience on a computer screen. It can't be turned off with a keystroke, and there are no menus or pop-ups to distract from the subject matter.DS. Several of your essays, developed on assignment, document a place and it’s culture or a culture and it’s place. What is your approach to a new place or a new culture as a photographerSF. I am very place-specific in my work. My first book, “I Am Rich Potosí: The Mountain that Eats Men,” was set on a single mountain in southern Bolivia. In the case of Violentology I cover the entire country but I went back to specific places there many times to get a sense not only of events but of the feeling or 'culture' of each place.DS. Writing about your project on the 2000 election in Florida, you express near certainty that the election was manipulated but you note that your photographs cannot provide any evidence of this. Is this recognition of the limits of photography in providing evidence of systemic abuses by established authorities?SF. Yes. I think that photographic documentation of crimes almost always has to be accompanied by some text, by investigations in words. The two should complement each other. Its like the work of forensic anthropologists who exhume the remains of murdered people to investigate the crime. Their work is always documented photographically but other disciplines are essential to finding out the truth. 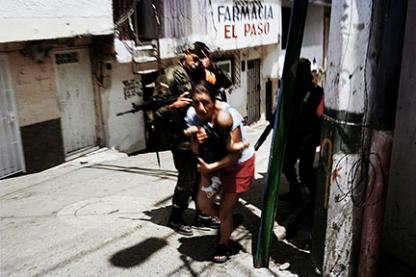 DS. How effective do you feel your work has been at raising awareness and mobilizing social change?SF. I do think the Violentology project has helped to present a much more nuanced view of Colombia and has raised awareness. I don't know to what degree the book itself has mobilized social change on its own. Much of this work was done in collaboration with Human Rights Watch, which is an extremely effective organization at defending the rights of victims and seeking justice for crimes committed by the state and other actors. So, I think that in the hands of allies who are expert human rights defenders this work can be a help.