Paula Bronstein is a senior staff photographer with Getty Images since 2002. She has been working as a photojournalist for over 25 years, covering a variety of news and features, natural disasters, wars, and conflict zones. After September 11, 2001, she was assigned to cover Pakistan and Afghanistan and continues to cover the issues closely in the region, especially Afghanistan. Paula earned a bachelor of Fine Arts, majoring in photojournalism at the Rochester Institute of Technology in New York. She started her career as a staff photographer in 1982, working for various newspapers covering both local and international news. Paula began at the Providence Journal Bulletin, moving on to The New Haven Register, and The Hartford Courant for 12 years. In 1996 she was hired staff at The Chicago Tribune and finally the Register Guard in Eugene, Oregon.Among many coveted awards, Paula just won “Photographer of the year 2010” awarded by the Foreign Correspondents Club (FCC) of Thailand. In 2009 she was runner-up “Photographer OfThe Year” in both Pictures of the Year-International (POY-I), and National Press Photographer’s Association (NPPA). She also was awarded prizes in Days Japan, China’s International Press Photo contest (CHIPP) and was recently named top ten in the Leica Oskar Barnack Award. Numerous awards from previous years also include World Press Photo, Overseas Press Club: the John Faber award. Exhibitions with her work from Afghanistan over the years include exhibits in Hong Kong, Bangkok, London, New York, and South Korea, Dubrovnik, and Perpignan, France. Her work from Afghanistan has also been part of group exhibition produced by Leslie Thomas, Artworks projects.In 1998, Paula chose to go freelance moving to Bangkok, Thailand. After four years, she joined Getty Images as a senior staff photographer in the News division basing herself out of Bangkok while covering the Asian region.SB. Is your work a photo evidence of something?PB. My work documents life in Afghanistan, starting in 2001 when I first traveled to the country, through acts of violence, the on-going war, and daily life. 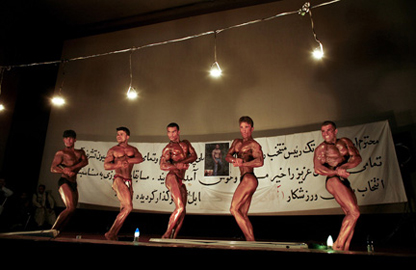 SB. What is the danger and what is the reward of being female photographer in a country at war?PB. Well, first of all, as a female working in this conservative Islamic country I try to intimately bring my camera into the lives and the important tough issues that Afghan women deal with, even the fact that they try to kill themselves by self- immolation because of forced marriages and years of abuse and beatings. The dangers are there, in Kabul less so, but there are many Taliban infested cities and towns that I can’t travel to now while years ago I could. I drove the newly built road between Kabul and Kandahar in 2005, now it's a Taliban toll road and unthinkable to even go very far south from Kabul on this road. Things have changed dramatically in Afghanistan since 2001 because of a lack of security. This means I face more dangers trying to get the photos unless I am embedded with the military.SB. You are famous with your capability to give war a human face. How does this face look in Afghanistan?PB. Not every part of the country is at war, Afghans have to go about their daily life in spite of what is going on around them. I try and document that, working on daily features around the news, trying to highlight various issues that I feel are compelling and tell stories about the Afghan people.SB. Has being un-embedded helped your work as a photojournalist?PB. Well I wouldn’t say it’s helped it as much as brought another point of view. When a photographer is embedded they can only work within the rules of engagement of the military and, due to the dangers of war, it is unsafe to work in areas like Helmand without being embedded. While the international media needs to document how our soldiers are winning or loosing the battle, it’s equally important to show how the Afghans are affected. I will embed when it gives me an advantage to photograph something that is impossible otherwise, where access is a key to getting the picture. Like getting to the front line after an IED explodes to document the civilian casualties, innocent men, women and children. 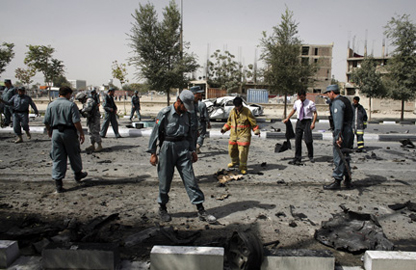 SB. Are your photographs a judgment on the war in Afghanistan?PB. Not at all. As a photojournalist I have to remain impartial, and unprejudiced. I try to remain fair-minded although war can be ugly and unforgiving, mistakes happen and there is a lot of collateral damage that I have witnessed over the years. Somehow it’s always the poor Afghans who are caught in the crossfire.SB. You had incredible access to private spaces and homes in Afghanistan, photographing women's struggles, self immolation, and many victims of domestic violence. Are these stories women tell better to women than to men photographers?PB. Yes of course... in this conservative Islamic country women have to trust women more. They live in a man’s world, totally lacking equal rights. Many are wearing burqas to cover their faces in front of males. Trust isn’t there. It’s cultural. 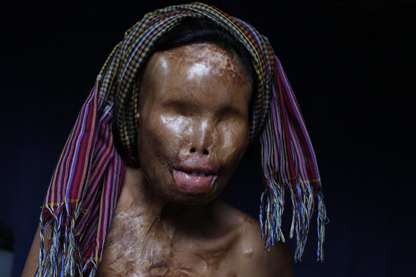 SB. You have seen allot during this 10 years. What don't you want to remember and what don't you want to forget?PB. This is a tough one! I don’t want to remember the carnage after a suicide bombing, the dysfunctional Afghan government and its widespread corruption and the way I have been treated by abusive Afghan police in Kabul who would happily abuse me as I try to get access to some news situations, Afghanistan has hardened me in some ways, I am tougher. I don’t let anyone get in my way, not even Afghan police.SB. Some photographers think that the American public is tired of the images of the war and has lost interest. How do you draw them back to pay attention to what is going on in Afghanistan with your photography?PB. There is definitely war fatigue, visually and mentally. It’s negative, soldiers are dying and many at home are not in favor of this endless war that is costing the US billions of dollars. Especially since the war is not exactly going well theses days, winning “the hearts and minds” of Afghan people isn’t easy. Photographs from embeds where photographers are risking their lives are just as important but it’s harder to get them on the front pages.SB. Kim Barker, in her essay about you, describes you as a not impassive journalist, continually adopting Afghans you met while on the job. Tell us some of these stories.PB. There are too many to tell!SB. Afghanistan became your mission for the last 10 years. Is this mission accomplished?PB. As the war continues I will also want to be covering the ongoing news but I don’t live there so I am always able to come back with fresh eyes and discover more stories to cover. For ten years it has been my mission to get this book published. It's a milestone, a retrospective. 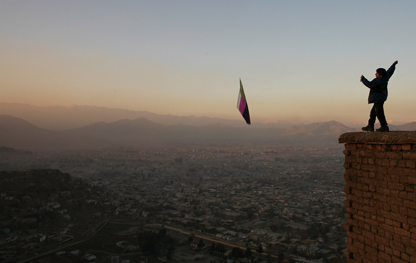 A boy flies a kite along a hill overlooking the city of Kabul at sunset. Kite flying was banned under Taliban rules for years.