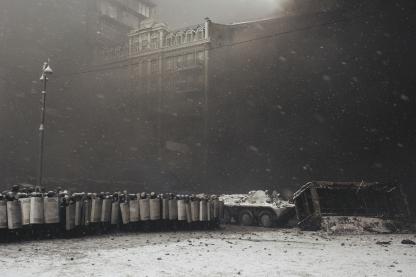 After the clashes with the protesters, riot police protects the armored personnel carrier removing burned buses from the center of Kiev.

SB. When and how you became a photographer?MD. I got acquainted with photography three times. The first two were unsuccessful. My first meeting was when I was a child, when my mother and I were sitting in a red room. She was an amateur photographer and constantly took pictures of our whole family on a ZENIT camera. I remember I was given a camera SMENA, but my enthusiasm didn’t last long. I took up the camera again when I was 12 years old. I joined a photography club. I went there for a couple of months, shot several dozen rolls of film, developed them and than threw the whole thing away.When I was 24, I worked in a totally unrelated field. I returned to photography as a hobby. I read a lot of material about visual arts and photography. I tried to read everything I could find in Russian. At that time, there were neither tablets nor the ability to buy books about photography, so I just printed texts from the Internet on A4 and read it on the subway and between work. On the weekends I would confirm in practice all I had read. At first, I worked at night in a secure job and as a photojournalist in the afternoon, for free, just for the experience. But after half a year I left my main job and became a photojournalist in a daily newspaper. 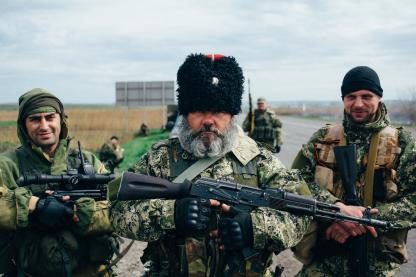 Militias of Donbas blocks the road near the checkpoint on the road to Kharkiv.

SB. Who is the photographer that influenced you most and why?MD. Mostly I’m influenced not by photographers but by writers. In photography I prefer the classical school and such photographers as Eugene Smith and Sebastião Salgado. Of the photographers who shoot color photos, I’m interested in Alex Webb and Gueorgui Pinkhassov. At the beginning of my professional journey, I was a great ! fan of James Nachtwey. At some moment, I realized that I was interested in a social themes. Perhaps, it was due to my passion for James Nachtwey and Sebastião Salgado. At that period of my life, I read a lot of their interviews and saw their photographs, trying to understand what moves them.I realized that I didn’t need to go anywhere out of my country, as there are so many social problems in Ukraine that I just needed to decide what topic I wanted to uncover. I chose the problem of tuberculosis, as at that time I also believed in all the stereotypes of the disease and didn’t suspect that the epidemic of tuberculosis has a status of a national problem here. The more I got into this topic, the more it drew me in. I devoted more and more of my free time to it and, four months after I started shooting the project, I lost my job and my girlfriend left me. I had nowhere to live and didn’t have money. But compared to all the problems that I documented, my problems seemed not so terrible. I left Kiev, because I couldn’t afford to rent an apartment. I lived in regions where was shooting and sometimes lived in TB hospitals, visited TB prisons. This project became a part of me. I tried to plunge into the life of people suffering from tuberculosis as much as possible. At that time, I was interested in the novels of Hunter Thompson and they had a great influence on my approach to the project. After two years of such a life, I understood that I needed to stop, as the borders were lost and I was plunging too deeply into all this. I want to thank my friends who helped me during this difficult period.My values in life have changed. Such close contact with death, especially the slow death of tuberculosis, taught me to appreciate every day of life and to get used to death.SB. You were on the streets of Kiev during the revolution this year. What was important for you to capture?MD. It was my first shooting in such extreme conditions. I was even wounded in the leg by a grenade, and couldn’t walk for some time. It was a really great and important experience for me, as I wanted to work in a conflict situation. We used to say, “be careful of your wishes”. Although I think that our revolution was the most beautiful revolution in the world. It was an unbelievable vision, like a Hollywood film.I tried to show passion and power of the people in my photos. But first of all, it’s my country’s history and I couldn’t sit by without documenting it. I spent almost all my time on Maydan Square. I live within 20 minutes of it but the risk of missing something made me not go home. When nothing important happened on Maydan, I went home but as soon as activity began there, I returned. I lived on Maydan, ate revolutionary products, listened to the music there and took part in all critical moments that happened there. When Russians began to occupy the Crimea, I went there and spent some time. And I recently returned from the Eastern Ukraine, where I spent a couple of weeks. This story isn’t over for my country.I am against the position when the photographer or journalist becomes an activist. Of course I had my position and point of view, but it was seen only in my photos. I saw when journalists smashed windows with protesters, occupied government buildings or crushed the monument of Lenin with a sledgehammer. I think this is unacceptable. If we talk about the photographer-activist who opposes something and his activity doesn’t go beyond journalism and photography, I’m for such activity. 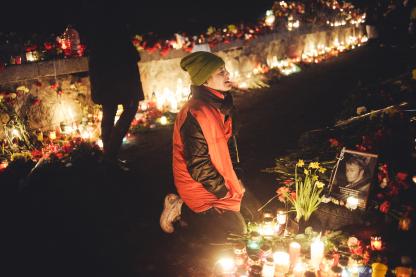 SB. Is your photography a social statement?MD. If to talk about photos from the TB project, they had a great resonance in the society, attracted the public’s attention and focused some charities on this problem. But if you talk about shooting during protests in Kiev, and now in other regions - I’m documenting the history of my country, I do not even realize what social value my photos will have. I don’t have time to think about this. 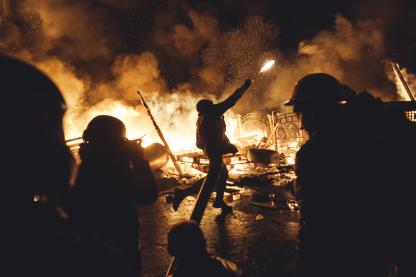 SB. Recently you were selected among the 30 under 30 photographers to watch. How do you see your future as a photojournalist?MD. True to say, I don’t see much future in photojournalism. I want to believe that working as a photojournalist, you can subsist but I am not sure. Now I stay up due to two magazines, Der Spiegel and Russian Reporter. I am very grateful to Matthias Krug and Andrei Polikanov who are directors of the photo service. Of course I collaborate with others editions, but they are not systematic.When I am interested, I choose a theme and work on it for a long time. After that I suggest it to magazines. Not news, where hundreds of reporters and photographers are. But the way I work you need alternative sources of funding. I have an idea to make every shoot into multimedia for the iPad, using photos, text and videos. In such way, I want to show the story in the form I see it, directly to viewers, bypassing the mass media. But you need to find a team, because it is impossible to realize oneself. Also, after my country passes through this difficult period, I plan to leave Ukraine and to expand my geography. 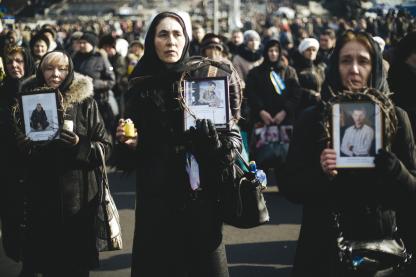 SB. I always ask devoted to social cause photographers the same question: do you believe your photography can change the injustice?MD. I believe in the power of photography and the fact that it can change the world. Even if not as quickly as we would like, but a little goes a long way. Just as war destroys the world, social photo resists this destruction. It evokes compassion for people in a time when war is hatred.