Marcus Bleasdale is the winner of the 2015 FotoEvidence Book Award with his long term work The Unravelling: Central African Republic. He is dedicated to covering issues under reported and forgotten by today’s media. He uses his work to influence policy makers around the world. His work covering human rights abuses and conflict have been shown at the U.S. Senate, The U.S. House of Representatives, The United Nations and the Houses of Parliament in the UK.Marcus has been awarded with the The UNICEF Photographer of the Year Award (2004), The OPC Olivier Rebbot Award for Best Foreign Reporting (2005), Magazine Photographer of the Year award POYi (2005), The Alexia Foundation Award for World Peace (2005), The World Press Awards (2006), The Freedom of Expression Foundation Norway (2007), Days Japan (2009), The Anthropographia Award for Photography and Human Rights (2010), The Hansel Meith Award (2010) and the Photo Book of the Year Award POYi (2010), Freedom of Expression Foundation Norway (2011), Webby Award (2011) News and Politics for his multimedia piece Dear Obama. In 2012 Marcus’ film for MSF was nominated for an Emmy together with other VII photographers. In 2014 Marcus’ work for National Geographic Magazine won a World Press Photo Award and the Photography award at the Overseas Press Club of America. He was also awarded the Society of Environmental Journalists award for his work in DRC on Conflict minerals.SB. Often your lens is focused on Africa. Why is this?MB. Over the years I have mostly focused on those issues forgotten or overlooked by the world’s media. Trying to give a voice to those who are not being heard. Often those issues were on the African Continent, where I focus on more long form narratives, issues which require months or years of coverage in order to get deep enough into the lives of the people I cover and to do them justice. 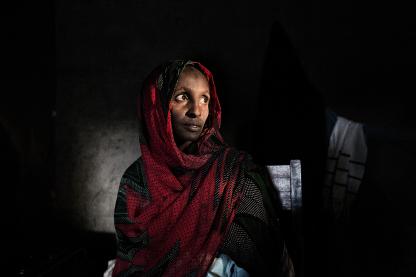 Khadidja Alhadji Adbou, a 30-year-old Mboro woman, witnessed anti-balaka forces shooting and killing her husband and three children. In the same attack, she was shot in the neck but survived. October 31, 2013.

SB. You returned to the Central African Republic (CAR) in 2013 because ongoing conflict there was intensifying. What did you witness?MB. The conflict in CAR was the most hateful and brutal I have witnessed in fifteen years as a photographer. People were being killed with machete and knives on the streets in front of us, every day. Those doing the killing did not care that there was a witness. These attacks often led to immediate retaliation and, so, the perpetual killing continued. I have now covered CAR for over 18 months and, while the killing has calmed down in recent months, there is still high tension in many areas and the Muslim population has largely disappeared from the country, preferring to flee to Chad or Cameroon.The economy has been devastated and the future is very uncertain 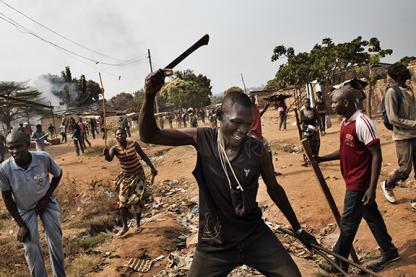 Christian Anti Balaka attack muslim property in PK 13 on the outskirts of Bangui after the Muslim Seleka government fell and the Muslims in the area have fled. The Christian community is taking revenge for the months of harsh Muslim Seleka rule, trying to destroy and loot everything in the Muslim districts. There are very few Muslims left in Bangui and even fewer in the outlying towns northwest of Bangui as the Christian population target all muslim communities, killing, burning and looting.

SB. How do you prepare yourself psychologically to work in this type of environment?MB. I don’t have too many problems going into that environment but I do have some issues when I return. Readjustment takes time and it is important that we, as journalists, recognize that we need help with that readjustment. The organizations I work with have been very open and helpful providing the right advice and psychological support for us to help deal with the things we see. I think it is essential we open up to the fact that both the people who cover these issues and the people who live through them need more psychological support than we realize.SB. When people are killing each other in front of your camera how do you know when to take a picture and when it is a time to leave?MB. I took these images in CAR as evidence. They are not particularly well composed images. Photography was not really on my mind when I was recording these moments. I do it so there is a record for some form of justice in the future. I take one or two images then leave immediately as I do not want to encourage a particular behavior “for the camera” which was happening in some cases during that conflict. We saw some of the killers posing for selfies in front of the burning corpses, it was very disturbing.SB. This conflict seems to be forgotten by the media. From your experience, when a conflict loses media interest what can be done? How will society be alerted to what is going on?MB. These conflicts do not occur in a vacuum. They compete for the attention from the world’s media and the CAR conflict occurred at the same time Nelson Mandela passed away, Ukraine blew up, airliners fell out of the sky and South Sudan (another dreadfully forgotten conflict) was falling apart. The world’s media has such limited resources that very few organizations covered CAR in the way the other ‘more accessible issues’ were covered.SB. Telling stories is important but is it enough to tell the story? How did you go beyond this in your work with Human Rights Watch?MB. For me the photograph is the beginning of a process of advocacy and education. I want to partner with organizations that can use the work I create and make it more effective. Working with Human Rights Watch (HRW) allows me to do just that. Also working with extremely resourceful researchers and human rights lawyers opens doors to policy makers and decision makers. The work of HRW and others in CAR led to the intervention of the French forces and the later introduction of the UN security resolution to send a peacekeeping mission to the region. That is the power of photography and great partnerships. We continue to raise awareness together in the region and we have just returned from assignment in CAR covering the forgotten enclaves in the interior of the country, where thousands of Muslims are trapped in the most appealing of conditions. We were also covering the issue of conflict and disability and what it is like to be disabled and flee from conflict.SB. You received the 2015 FotoEvidence Book Award and your work, "Inferno: Central African Republic," will be published in a book. What are your expectations after the release of the book?MB. We must work out solutions for many different ethnic groups to live together peacefully and justice is a part of that solution. I hope the work is an integral part of that education and advocacy process. 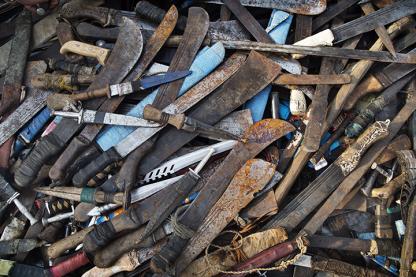 Machete collected by FOMAC troops in the disarmament process.