Manu Brabo (Spain, 1981) is a Pulitzer Prize winning photojournalist whose work is mainly focused on social conflicts around the world. Since 2007 he has worked on political upheavals, uprisings and wars in Haiti, Honduras, Kosovo, Libya, Egypt, Syria and Ukraine, among others. During the last four years, Manu has contributed to several news agencies such as EPA and AP. His stories have been published in the most important magazines & newspapers. In addition to the 2013 Pulitzer Prize for his work covering the Syrian civil war for The Associated Press, he received POYi 2013 and the Bayeux-Calvados for War Correspondents 2012.Manu Brabo is a co founder of MeMo magazine.SB. When and why did you decide to put yourself on the front lines? Did you always want to be a photojournalist?MB. The first time I decide to be in a real front line was Libya. Before that, I did a few other “low intensity” conflicts, like the West Bank, Kosovo and Haiti... mostly stories that helped me to improve my skills as a photojournalist and helped me to grow up as a human being. And yes, I have wanted to be a photojournalist since I was a teenager. I have written and shot in some other areas of journalism and photography and, trust me, there's no other reason for me to be a photographer if I’m not working on social matters. War is one that matters but not the only one.SB. What do you remember from the first conflict you photographed?MB. I have plenty of memories from my first conflict: The first days under fire, running back and forth with the Libyan rebels, the fight in Benghazi the day the Gaddafi troops arrive at the outskirts of the city, a day before the first NATO bombing on the loyalist troops. I remember the good friends and mates I found helping me in any imaginable way, my capture alongside my friends Clare Gilles and James Foley, also Anton, who was shot to death during our capture. I remember the time I came back to Libya during the battle for Tripoli to cover the rest of the war, my first day shooting for the AP (A presser for UK and France prime ministers on that time: Sarkozy and Cameron), the boring extremely hot days near Bani Walid, then the last rebel offensive against the loyalist stronghold of Sirte. I remember we arrived13 minutes late to the capture of Gaddafi.Well, I think I can remember almost every single day I've spent in that war I was captured in early April that year and freed on May 19 after 45 days in jail. 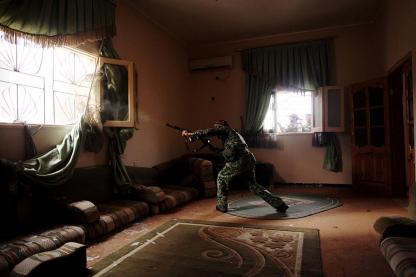 SB. Describe a routine day of a conflict photographer. Was it different in Syria than Libya or Ukraine, the conflicts you recently covered?MB. I think a normal day for us it's like normal day for most of humans: I wake up, I go to work, I go "home", I prepare next day's work and I go to sleep. Of course there are some peculiarities in the environment we work in, but this is a matter of our job we have to accept, like a coal miner accepts a possible gas blast or being trapped for ages underground. We (I have a very nice band of amazing freelancers I normally team up with) have been even cooking Spanish tortilla and Italian pasta in Aleppo… even going to the market. Obviously, now the situation has change a lot there.Anyway, we try our best to make a comfortable place always, somewhere to feel better among all that shit. We're just normal people trying to work and survive in a weird painful environment, more or less like any other human being is doing around us when we're in the field.Of course, there are many differences between the different conflicts. And those particularities change our behaviour, but in essence, I repeat, we try to develop some kind of normal life in any case.A rebel fighter running during a combat against loyalist at 700 houses district, outskirts of Sirte, Libya. 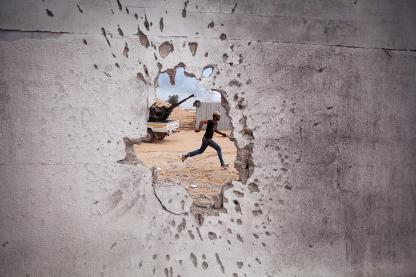 A rebel fighter running during a combat against loyalist at 700 houses district, outskirts of Sirte, Libya.

SB. You were kidnapped by forces loyal to Kaddafi in 2011. How did this happen?MB. That happened because war is tricky. We were caught in an ambush while riding with a rebel group exploring near the port city of Brega. We were trapped and our escape route was cut off. They started to shoot at us because the surviving rebels managed to flee the area. We were lying on the ground with bullets flying over our heads until James Foley (God bless him) stood up bravely and start to shout "sahafi, sahafi,,," (journalist in Arabic). Then they stopped shooting at us. They jumped down from their trucks and they started to beat us hard. Next thing I remember was seeing Anton's body near the road. The rest of the story: 45 days held in different regime jails and finally ( I still wonder how) released. 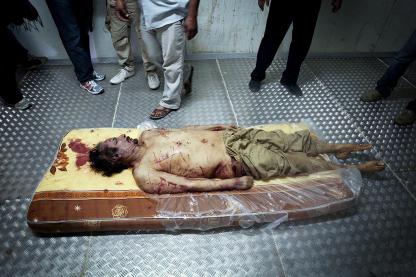 SB. What was it like in the prison? Did you fear for your life? Did you have doubts about whether your job as a photojournalist was worth the suffering?MB. Prison was boring, basically. The most boring was my first 19 days in isolation. Talking to my self, making exercise and trying not to loose my head (somehow I managed and somehow I did not).I feared for my life every single second. First, because my life did not belong to me any more. Second, because at that time NATO was seriously attacking the regime. I feared I would be punished as retaliation for the attacks on the regime. Finally, nothing happened and here I am, still alive, healthy and working.I never thought it was not worth it for my job. The thought that kept me strong was that I was there because I was doing my job the best I could.

Mourners gather around the coffin bearing Artiam, 4, during his funeral. According to different sources, he was killed during a Ukrainian army shelling. Kuivisevsky district in Donetsk, Ukraine, January 20, 2015. SB. What was it like returning to your life after you were released from prison?MB. The most difficult thing was to find a balance between that guy I was before and the guy I became in jail. I also remember that the Spanish media, always delighted with a sensationalist story, were bothering me a lot asking for stupid interviews I was not ready to face, simply because I was not ready yet to understand the many situations, reactions, feelings and thoughts I had just passed through. Sometimes I still need to work on that.SB. Does your experience in Libya changed the way you see and photograph war?MB. In many ways it does. I think this experience has helped me to grow up probably in all the areas a human being needs to grow: spiritually, emotionally, as well as intellectually. I really believe this experience has made me richer and it helps me to empathize with the people I photograph. I am not going to say my experience is similar or close to all my subjects’ experiences but, for sure, I can share with them fears, emotions and ideas which most people do not recognise as their own. Many I do. 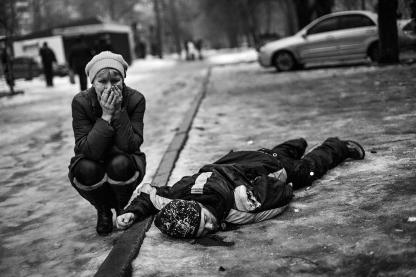 A woman cries next to the body of her relative, killed during an alleged Ukrainian Army shelling Semashko area, Kirovsky, district in Donetsk, Ukraine. Tuesday, January 23, 2015.SB. Why did you go back to Libya to photograph the prisons?MB. Honestly, I don’t know what the goal behind the idea was. A some kind of therapy, I suppose. I had to face that place again, as simple as that. Then I thought about using my camera, not like a camera but like a shield. A shield against emotions that finally became useless. So, I ended up doing a three-year project about the situation in prisons there.Anyhow, I had a previous idea once came to me during my first day in Jdeida prison in Tripoli. My "room" mates were praying and i was there lying in a mattress and freaking out with the power of the scene. I remember I was thinking a lot about my cameras during the whole stretch in prison.In time, everything came by itself. Tripoli fell into rebel hands and I went to pay a visit to my old prison. After a few hours dealing with the guards, I managed to go in for a fast visit. What i found there was weird. It was kind of shocking to see the two sides of the coin in such a clear and solid way.SB. Do you consider it important to study the culture of a county before you go to photograph there? How do you prepare yourself for going to another conflict zone?MB. It’s important but most of the time we have no time to prepare ourselves in such a way. What I think is really important is to make several trips to the same area in order to get a better understanding of what's going on there. The better the understanding, the better the pictures get. And I'm not only talking about the aesthetics, but also about the narratives and the emotions we, as photographers, are able to put in a shot. 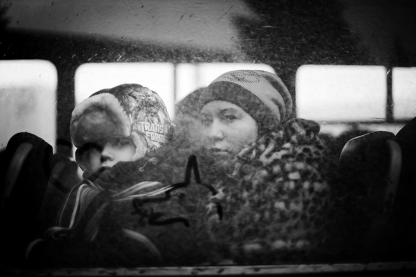 A woman and her son on a bus during an operation to evacuate Debaltseve, in the Donetsk region, on February 1, 2015

SB. Most of your work is black and white. Why not color?MB. The reason why I shoot B/W is, precisely, that most of my work is in colour. I've spent the last four years of my life freelancing for wires, so it's like tons of colour images floating somewhere in the wire universe. In the B/W i feel my self released and I feel i can bring the reader into the story easily, avoiding the color "tricks" (and yeah, there are also B/W tricks, that's not the point) The point is, I feel it closer to me at this stage, maybe in some months I'll be shooting color again...Who knows?SB. What is the story behind your Pulitzer Prize winning image of a Syrian man mourning the death of his son?MB. It was Oct. 3. Some mates and I came down from our apartment in Saif al Dawla district to Dar El Shifa hospital. I was talking to some doctors and volunteers I knew from before and then I saw this man walking into the hospital carrying the body of this kid, around 13, severely wounded. I followed the man into the surgery room and I started to shoot. I left the room fast and I waited in the hall of the hospital while the doctors were trying to safe the kid's life. After some minutes, the man came out carrying the dead body of the kid. He fell down a couple of times before starting to mourn the body in the middle of the street, right there in front of the hospital. I had to wait there for at least 45 minutes until a relative came to pick him and the body of his son up... I've never asked the name... I tried in following trips to find any clue about this man. I have never succeeded at this task. Anyhow, to me he represents every single father in the world: I’ve never seen in my life such an enormous and sad gesture of love. I try not to look at it. 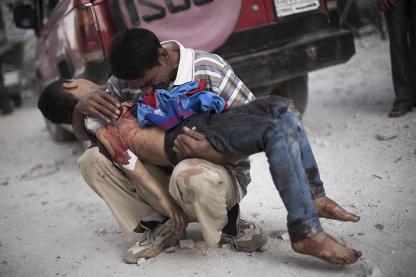 SB. How do you see yourself in 30 years? Do you think you will have the same passion for covering conflicts?

MB. In 30 years I'll be 64 so I hope not to be covering conflicts by then. Anyhow I would like to still be involved somehow in war photography. Maybe as an editor... who knows...