Lucian Perkins is a two-time Pulitzer Prize winner (1995 and 2000) who worked as a staff photographer for The Washington Post for 27 years. In 1996, his photograph of a boy in war-torn Chechnya was awarded World Press Photo of the Year, and in 1994 he was named Newspaper Photographer of the Year by National Press Photographers Association. Most of his work has been in the United States, but he has also covered wars in the former Yugoslavia, Russia, Israel, Iraq and Afghanistan. Currently, Perkins is an independent photographer living in Washington, DC.SB. How and why did you learn photography?LP. While majoring in biochemistry at the University of Texas in Austin, I was a Resident Assistant (RA) at one of the dorms. One of my residents sold me his camera, an old Pentax Spotmatic. That initiated my interest in photography and soon after I took a photography class as an elective. There, one of the class’s teaching assistant suggested that I apply for a job opening on the university’s newspaper, The Daily Texan. That job, along with a photography class I took by Garry Winogrand, then teaching in the university’s art department, inspired me to change directions and become a photographer. While working on The Daily Texan, I applied to nearly thirty newspapers for a summer internship.The Washington Post hired me. My goal during that internship was to persuade them to hire me full time. I was convinced that the advice I had read in an interview with Robert Gilka, then the Chief of Photography for National Geographic, would help me do that. He said, “We're up to our armpits in great photographers, but up to our ankles in good ideas." I took that to heart and decided to come up with my own stories while an intern at the Post, even if that meant shooting them on my own time after work. One of those story ideas not only ran on the front page of the Post but was also picked up by nearly every news organization around the world. The Post extended my internship for six months, and then hired me full time. I ended up working there for 27 years.SB. How did you develop an interest in human rights projects?LP. As a photographer for The Washington Post, I photographed every aspect of life and culture. One day I would find myself at a glitzy political party. The next I would cover a soup kitchen; an event at the White House; or the funeral of an innocent bystander killed in the crossfire of a drug gang shootout.Many of these stories provided me an opportunity to understand the disparities that people often live under in our country. For example, Leon Dash, a reporter for The Washington Post, and I followed a mother and three generations of her family in urban D.C. in an effort to better understand how poverty, illiteracy, drug abuse, recidivism, and racism moved from generation to generation. One of her grandchildren, Reco, whom I first met when he was eleven years old, was a sweet and loving kid like any other child you might encounter in this country. Four years later he was involved in a gang shoot-out and killed. I often thought that in another environment that child might have had an opportunity to blossom and become a valuable member of our society.Overseas I was confronted with more overt examples of human rights violations as I covered wars in Chechnya, the former Yugoslavia, Iraq, and Afghanistan. For example, in Kosovo I listened to and photographed a 14-year-old girl who was lined up with her parents and siblings and then witnessed her family being executed. She survived because the bullet meant for her, hit her cheek and allowed her to feign being dead.The realty is that once you have experienced first hand the innocent victims who never had the chance that many of us take for granted to pursue our dreams, the concepts of “social justice” and “human rights” become very important. 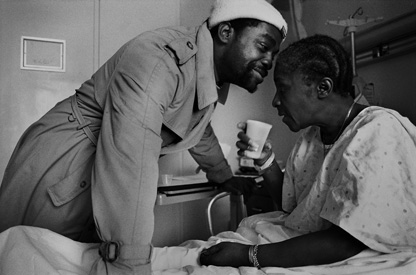 SB. How do you understand the mission of photojournalism?LP. I remember as a child being deeply affected by photographs taken during the civil rights era of, for example, police setting dogs on black demonstrators in Alabama, or later, by war images from Vietnam that made me wonder if I were going to be drafted. Photojournalism can move us to reflect on what is happening in the world around us and even take action. More recently, a Washington, D.C. art curator told me that when she was in high school she was so inspired by photographs I had taken in Bosnia that ran in The Washington Post. Years later she spearheaded a joint exhibition of work by emerging artists from Slovenia, Croatia, Bosnia and Herzegovina, Serbia and helped bring them to the U.S.What makes photojournalism stand out is the ability to freeze a moment in time and capture a revealing emotion that affects us. That emotion transcends race, religion, gender, and politics. And it is because of that that we can take the place of the person in the image and imagine that it is us being chased by police dogs; us consoling a dying comrade; or us being that Bosnian child confronted with war. That connection can begin to strip away the prejudice or lack of understanding any of us may have once had toward people outside our immediate lived experience and provide a gateway to better empathizing and appreciate the world around us.That is my ideal of what photojournalism can do and it is certainly what I strive for as a photographer. 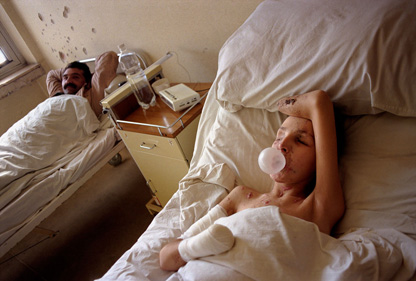 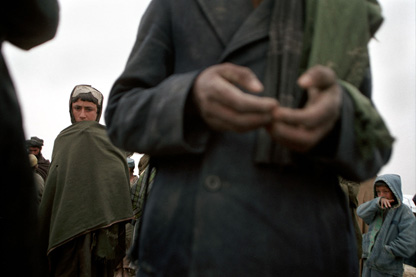 Seven months before 9/11 Afghanistan stood isolated and in ruins after 22 years of war and the worst drought in memory. By 2001 700,000 Afghans streamed toward the borders. Many had watched their crops and animals die. Many were caught in the middle of the long-standing civil war.

Mohammed Essa holds out his hands. They are encased in thick dirt. "Isn't the cold killing me? Isn't the hunger killing me?" He points to his wife, who looks back at him with a frightened expression. He points to his sons, one 8, the other 6. "I want to leave this place," he says.