Javier Arcenillas is an award winning photographer with more than 100 international awards, among them, Premio Ejército, The Arts Press Award, KODAK Young Photographer, Caminos de Hierro, (young author), Scholarship of the European Social Fund, Euro Press by Fujifilm, INJUVE, Third Award FotoPress ‘05 Prize, Médicos del Mundo ‘06, One Vision’06, ENS ‘08, Finalist of OJO DE PEZ’09 and UNION LATINA PRIZE 2009; Sony World Photography Award‘10 and Finalist at the 2011 FotoEvidence Book Award among others. SB. Your project, "Sicarios" takes the viewer right into the lives of these young assassins? How were you able to gain access?JA. I have very good friends at the newspaper "Periódico de Guatemala" and they´ve been very helpful. I started working with their fixers that could move easily in the areas where the sicarios are based. Then, once the first contact was made, the doors start opening slowly and progressively. It is a question of trusting me or not and being introduced by someone they already trust is fundamental.SB. Much of you work seems to focus on the disadvantaged. Do you see the sicarios as perpetrators or victims of injustice?JA. Sicarios are assassins but at the same time they are the result of a very violent society. In a way they are the victims of what they represent. Most of them come from very poor background; have no education and very weak family support if any. They have chosen the easy way to get along, which is the first thing to blame. It is not that I am justifying their activity but maybe now I can understand better how they end out murdering and being killed. Not too many sicarios make it to 25 years old.SB. Were there times during this project that you felt at risk?JA. Definitely! Even if at the same time I felt very protected. The thing is that talking to a 16 year old boy handling a 9mm gun and showing off his fearless courage is something potentially dangerous. 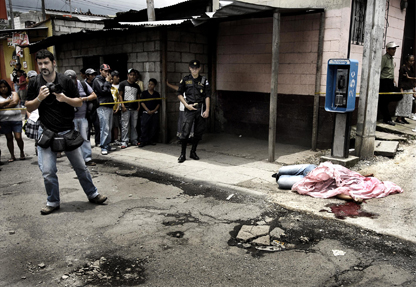 SB. How do you protect yourself on the streets while working on this project? Do you carry a gun?JA. Oh no! Absolutely not! My protection during all these days has been my friends and fellows from El Periódico de Guatemala. In one occasion, when covering a "nota roja", which is a gunshot alarm, the firemen asked me to wear one of their coats so that people could not identify me as a foreign photographer.SB. Did you have the chance to speak with some of those young assassins in order to understand better their motivations to become killers?JA. With this project I´ve had the chance to get close to their reality and understand in a way how their mind works. When you ask them why, most justify themselves saying they haven´t killed a man that would not deserve it. It´s their excuse but just a coward murderer´s excuse.I guess in the end the motivation is not different from most of ours: money. 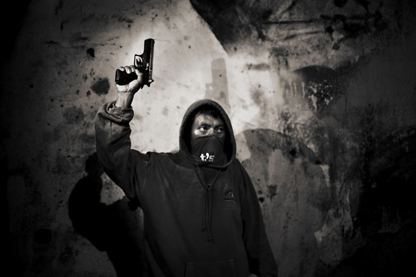 SB. I am curious; did you learn more about those kids, the sicarios, how they spent their life when they are not on assignment? Do they play, or go to school, what their relations are with their families?JA. The truth is that, these kids lose all the familiar links when they start their tragic career. Most of them belong to gangs that play the role of the family that support them. When they hang their first gun, their childhood disappears and their games become adult games and their playground the street. 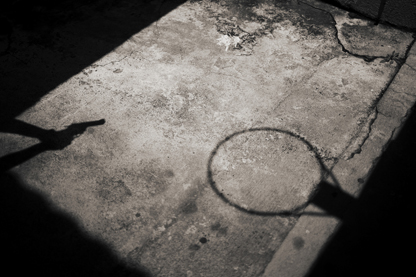 Shooting gallery at the headquarters of Starman, Security Company.

SB. Are you planning to continue working on this project, revealing more about the private life of sicarios?

JA. I hope I´ll be able to keep on working on this subject. Maybe from a wider angle but always focused around the main subject of violence in Latin America.

SB. Assassinations remain a problem in Latin America. Do you think your presence as a photographer touched the lives of any of your subjects? Do you think alerting the public to these circumstances can help bring the change needed to stop this violence?

JA. Honestly, I don´t believe so. This is not a problem that can be solved with a camera and I am not one of these photojournalists that save the world with images. In some cases we can aspire to heal it, but never to save it. My role in there has just been to tell a story in images, a real story, one of the most real stories I´ve ever told.

On the other hand, violence in Latin America is being used in many media as a product to be sold in vivid color front pages. There is an actual abuse of these images whose priority is no longer to inform, but to feed the morbid curiosity of an audience that is almost used to them.

Anyway if I had to draw a conclusion about what I´ve seen and what´s to do I could just point to the fact that getting rid of this violence is, at least in Guatemala, the priority for most of the people.