Hannah Kozak was born to a Polish father and a Guatemalan mother in Los Angeles, California.
At the age of ten, she was given a Kodak Brownie camera by her father, Sol, a survivor of eight Nazi forced labor camps and began instinctively capturing images of dogs, flowers, family and friends that felt honest and real. As a teenager growing up in Los Angeles, Hannah would sneak onto movie lots and snap photos on the sets of Charlie’s Angels, Starsky and Hutch and Family, selling star images to movie magazines and discovering a world that was far from reality.
While working in a camera store at the age of twenty, Hannah’s life changed when she met a successful stuntwoman who became her mentor and helped her start a career in stunts. For over twenty-five years, Hannah’s work provided the opportunity to work with notable directors such as Michael Cimino, David Lynch, Mike Nichols, Tim Burton and Michael Bay. She worked as a stunt double for celebrated stars like Cher, Angelina Jolie, Lara Flynn Boyle and Isabella Rossellini. On every set, Hannah took her camera to work, capturing candid, behind-the-scene pictures that penetrated the illusion of Hollywood magic.
Her wanderlust and career in the film business afforded Hannah the opportunity to travel from Japan, Korea, Taiwan, Mexico, Guatemala and Peru to Egypt, Italy, Israel and India, capturing images of far away lands and exploring the innocence and truth found in the faces of children from around the world.
Hannah has turned the camera on herself, her life and her world. She continues to look for those things that feel honest and real, using her camera as a means of exploring feelings and emotions. After decades of standing in for someone else, she now is in control of her destiny and vision.
Hannah is an autobiographical photographer. Her subjects are the people and places that touch her emotionally. She has been photographing people and places for four decades. Photography has the power to heal and to help us through difficult periods, something Hannah Kozak knows first hand from personal experience.Hannah is a finalist of the inagural FotoEvidence W Award.

Your new book He Threw The Last Punch Too Hard has a very disturbing title. What is the story behind it?From the age of 9 until 14, on the weekends I spent with my mother and her second husband, I watched him abuse her.  From being smothered with a pillow to slapping and hitting her. One night, he went too far, after yet another one of his drunken episodes, because my father had brought her a leather jacket, after I asked him to. My mother liked pretty clothes and I thought she would like a nice jacket. That night, a fight ensued because of her husband’s jealousy and he hit her on the head, left her on their bedroom floor and left the house. His sister called in the morning, my mother had reverted to her first language, Spanish, and she was rushed to UCLA emergency hospital with what would turn out to be a subarachnoid hemorrhage – a life threatening type of stroke caused by bleeding into the space surrounding the brain, caused by the blow to her brain. As a result, she had a right hemiparesis, meaning paralysis on her right side. Her life, my life, my siblings and my father’s life, all changed from that moment on. 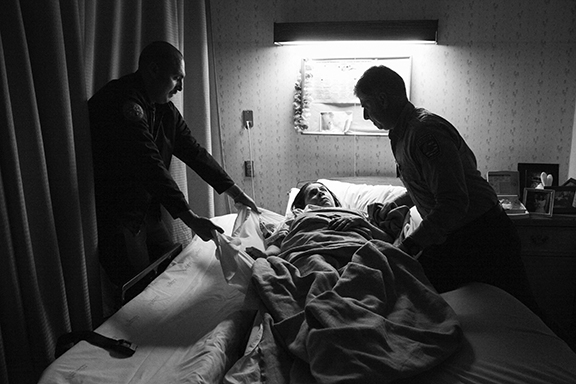 How did the absence of your mother impact you as a child and a young woman? What helped you close the wounds left by her absence?
I think the absence of my mother impacted me on every level. I’ve never known things that many daughters take for granted like lunch with their mother or someone to celebrate their wins with but she gave me advice that I listened to. “Hannah, get an education.” She was telling me, between the lines, to not make the same mistakes she made and be dependent on someone. I decided I would go to college, I would be a stunt woman, because I didn’t like fear owning me, that I would travel the world, handle my own finances and stand on my own two feet.
What helped me close the wound was my studies at the University of Santa Monica’s Spiritual Psychology  program where I learned to stop judging myself for judging my mother.  We can’t love someone when we are judging them.
Also, they say “time heals all wounds.” No, it does not. You just get used to the loss.  Now, no matter what happens, I can handle it because of what happened to my mother. You are a documentary photographer and a Hollywood stunt woman. How did these two work together for you?
I have always been a photographer since I was 10 years old. There was always a need to be documenting everyone and everything around me.  My career as a stuntwoman ended the day Michael Jackson died and I was hurt on a stunt job, Iron Man II.  I think both overlap as I don’t like to be controlled by fear and documentary photography is about showing the truth. By turning my lens on the world, I believe I can provoke thought and truth.
How long have you worked on this project about the life of your mother after she was permanently disabled as a result of domestic violence?
I began photographing my mother 1 year after graduating with an M.A, master’s degree in spiritual psychology. I completed the work after 10 years. 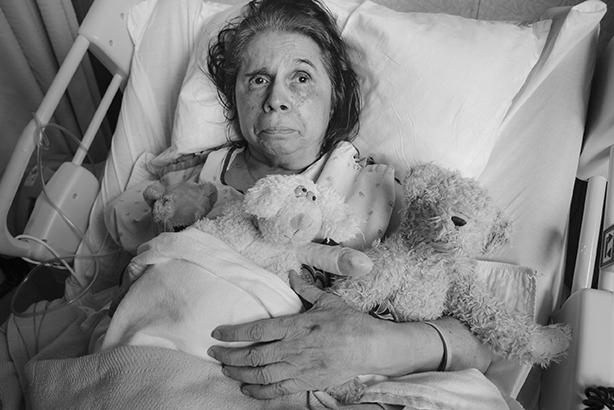 In the beginning of your project you did not plan to show your powerful intimate images to the public? What changed your mind and brought you to publish this book?
No, I did not plan to show my images initially. The images were created for my healing. In order for me to visit my mother, my camera allowed me both connection and separation. Keep in mind that my mother was like a stranger to me when I started to photograph her. It was so disturbing to see her in the nursing facility where she lived for thirty-five years. I vacillated between depression if I went to see her or guilt if I did not so then I came up with the brilliant plan to just stop going, which of course, didn’t work either.
What changed my mind was multiple reasons.  I can’t do anything about what happened to my mother but by sharing her story I can help inspire others to leave an abusive relationship. Once you put the monster in the spotlight, you demystify it. There is no honor by keeping secrets in your family or for your family. I resonate with this sentiment from the Talmud: You are not obligated to complete the work but neither are you free to abandon it.
The last words in the book are “LET GO” written by your mother with great difficulty. What do you believe is her message to us?
The art of walking away. My mother has taught me this. Don’t beg for love. When it’s over, it’s over. 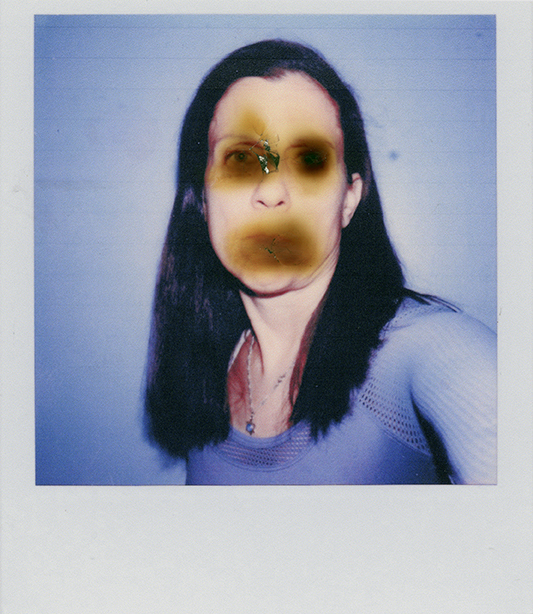 Self-Portrait: Hannah Kozak from the book He Threw The Last Punch Too Hard
Does He Threw The Last Punch Too Hard, which will be released next month, provide any advice to those who still fear leaving abusive relationships?
The message is that we think we can handle anything, in the name of love. Love isn’t abuse. Love isn’t ownership. Love isn’t control. Love isn’t the silent treatment.  I’ve had women who are actively being abused write to me saying “I love him so much, I can’t leave him.” That means they aren’t ready to leave yet. The message in the book is it may be too late one day so leave now. There will never be a better time than now.  I’ve learned I don’t have to be perfect to inspire others. My imperfections show that I’m human. I’m not embarrassed anymore about what happened in our family and instead, have become an advocate about domestic violence. We are here to reach out and touch others, not hide family secrets. It serves no one to lie about the white elephant in the living room.

The book He Threw The Last Punch Too Hard is available at the FotoEvidence bookstore online and Amazon.