Fabio Bucciarelli is a documentary photographer whose work focuses on conflicts and the humanitarian consequences of war. Fabio spent the last few years covering major, world changing events in Africa and Middle East. He reported from Libya from the earlier stage of the conflict to the death of Gheddafi, from Syria during the civil war and from forgotten countries in Africa as South Sudan and Mali. He feels the urgency to tell the story of people who are rendered powerless and to provide unbiased information focused on human rights.Fabio’s images won several international awards such as Robert Capa Gold Medal, World Press Photo, Pictures of The Year, SONY award and FotoEvidence Book Awards.His work has been published by The New York Time, TIME, The Washington Post, Newsweek, The Guardian and Observer, The Wall Street Journal, Los Angeles Times, Foreign Policy, Die Zeit, Paris Match, Internazionale, La Repubblica among others.He wrote the book ‘The Smell of the War’ on the Libyan conflict.SB. Robert Capa Gold Medal, World Press Photo, Picture of the Year International,FotoEvidence Book Award finalist, just to name few of the awards you were granted in 2012 for your photographs from Syria. Your images from there have such a quiet feeling, something that differentiates them from many others from the same zone. How did you to create such strong body of work?FB. What I try to document with my pictures are the difficult human conditions in which people live in. I try to establish an empathic relationship between myself and the people I meet. Once on the field my attempt is to become part of the situation itself, trying to be almost invisible to achieve better images.Being able to understand sudden situations, in which you’re thrown in, when in a conflict zone, is very important. Understand at a glance the thoughts and moods of others are an innate ability that grows with human experience, and, it’s essential to perform this job well. 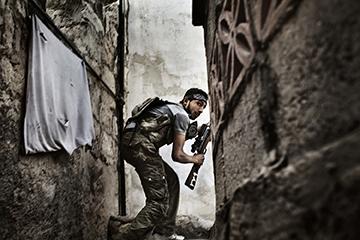 A Free Syrian Army fighter takes up a position during clashes against government forces in the Sulemain Halabi district.

SB. Was this a personal project or were you on assignment?FB. I went to Syria under assignment for Italian newspapers. After completing the commissioned works I stopped further to continue my job as a freelance and, after a while, I started to collaborate with AFP.SB. How did you become photojournalist?FB. Before becoming a photojournalist, I received an MS in Engineering in 2006 from Politecnico of Turin. I also attended the Universidad of Valencia where I specialized in digital imaging. From 2009 I dedicated myself entirely to photography and began working as staff photographer for the agency La Presse/Ap. A couple of years after I leaved the agency to start devoting myself completely to documentary photography.SB. What's the one big goal that drives your work?FB. Tell the stories of the people who are rendered powerless and provide an unbiased information focused on human rights 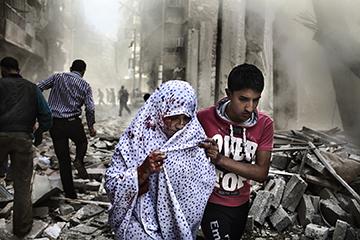 A Syrian woman is evacuated after being wounded in shelling by President Bashar al-Assad forces in the Shaar neighborhood of the northern city of Aleppo.

SB. How does witnessing so much injustice and death in conflict zones affect you emotionally?FB. Working in conflict zones is very stressful for human psyche. Speaking daily with colleagues, with people who’re experiencing the same situation is very useful for human mind. At the same time, is very important to intersperse periods of work with periods of rest.SB. Did you think about the possibility of being killed or seriously injured?FB. Dying or being injured is part of the possible consequences of covering conflicts. When someone chooses to do this job, he has to be aware of the risks involved. 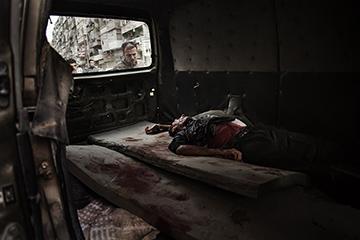 A man watching a slain man’s body laying in a truck outside a hospital.

SB. You are constantly on the road. How does this affect your personal life, your relationships?FB. The people who are close to me understand the importance of my work and inspire me to do so. Being constantly on the road hasn’t had a negative impact on my personal life, but rather. It helped me to create strong and stable relationships in which I can firmly believe and find unique support.SB. Is the work you do worth the sacrifice?FB. Absolutely 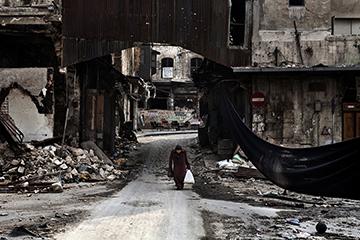 An elderly woman carrying grocery bags crosses a street next to a long black cloth used to separate the area from Syrian government forces' sniper fire, in the Bab el-Adid district in Aleppo.

SB. Do you expect to continue working in conflict zones? How do you see your life as a photographer in 30 years?

FB. I hope so. This would mean that I would be still able, physically and emotionally, to cover conflicts. Currently I focus on present without thinking about the far future.