Donna Ferrato is famous for achieving the seemingly impossible, establishing her career by visually capturing the horrors of family violence. Donna's unique ability to get behind closed doors has allowed her to capture the most complex moments in human interactions and relationships. Her commitment to society's darkest problems, from domestic violence to child sexual assault, have become landmark essays in the field of documentary photography. Her photographs have changed laws and consistently challenged ignorant attitudes promoted by society about violence against women and children. Her iconic book, "Living with the Enemy", has been reprinted three times and sold 40,000 copies worldwide.Donna has received numerous awards, including: W. Eugene Smith Grant,  Robert F. Kennedy Award for Humanistic Photography,  Kodak Crystal Eagle for Courage in Journalism, Missouri Honor Medal for Distinguished Service in Journalism from the School of Journalism at University of Missouri-Columbia, WebMD Grant. NYC proclamation announcing Donna Ferrato Appreciation Day (10/30/08) "for her service as an example of advocacy and activism and for being a citizen that the city is proud to call one of its own"In October 2009, the New York State Supreme Court Judges will honor Donna for her influential encouragement of gender fairness through her talent as both an artist and activist photographer.SB. Is "Living with the Enemy" photo evidence of something?DF. Living with the Enemy is definitely photo evidence of a crime being perpetrated against women. I was the first to document it in 1982 and with these images it became impossible to negate the fact that it was a huge problem. I don’t want anyone to forget what’s been done to them…not the women or the children nor the men…I want everyone to believe in their experiences and learn from them. I want the police, the judges, the doctors and the neighbors to remember. Most importantly, I wanted the media to be a reliable full fledged member of the learning process.SB. Why did you choose to witness and document assault on women, not something else?DF. I didn’t choose to document that crime, it chose me. At the time, I was photographing the freewheeling lifestyles of married couples. It took a while to decipher the manipulations going on behind the façade. Behind the implied sexual freedom there was the man’s ultimate control and threats of violence.SB. Why you are so passionate about this? Do you remember the first picture you took for this project?DF. I am passionate about what I do as a woman because I come from another era. It was a time when girls were vocal and were marking their territory and burning houses down with bras and garter belts still in the drawers. I was raised to value the rights of women; to live an independent life free from harm. When I witnessed a man use a woman like a punching bag, I became dedicated to educating, documenting and advocating against domestic violence. The first picture I took was in the “master” bathroom. At that moment I began to realize how he manipulated her into doing crazy things for his entertainment. She was standing naked looking at herself in the mirror. Her husband patted her bare skin and told her she could feel confident walking around naked while her daughter’s friends were partying for Halloween. He told her that her body was better than any of the girls there. When she left the bathroom she was wearing a slim chain around her waist and high heels. She was the only naked woman at the party in a house of teenagers. Five months later I heard a scream from the bathroom. I ran to see what was going on. He was beating her: I thought that my presence would make him stop, but it didn’t, and so I took the pictures. At the very least I knew it was evidence of his abusiveness and her helplessness. 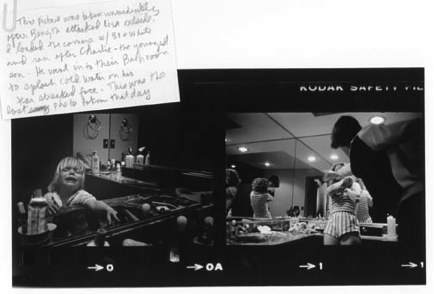 SB. Did the work on this project leave scars on you?DF. No, it is all part of life and part of the real world.SB. What changed after "Living With the Enemy" was published?DF. Despite not belonging to an agency, after the publication of “Living With the Enemy” there was now a body of work to be exploited, to make it available for women to relate to and to illustrate their own stories of abuse and police negligence. Battered women suddenly were given a voice. They realized they didn’t have to hide behind closed doors. Domestic violence became real in the court rooms, in the jails and in the emergency rooms. Living With the Enemy is evidence of the patriarchal system that condoned violence against women.SB. Your contribution against abuse and ignorance?DF. Elizabeth Hess, author and actress, said on the back of my book that my contribution was “to completely transform assumptions about battered women and the men who abuse them”. After the publication of Living With the Enemy, I felt there was much more to do. So I founded a non-profit organization known as Domestic Abuse Awareness Inc.For ten years we raised money for shelters, batterers program, children who witness violence, and for families in need. Our mission was “to end violence against women and children through awareness, education, and action.” The organization was highly successful until Bush and Cheney took power. In the blink of an eye they turned the world’s focus on making war against Iraq. Suddenly violence in the home was small potatoes. The call to stop violence against women and children diminished and went off the radar screen.SB. When you witnessed a man beating a woman were you divided between taking the picture or defending the victim?DF. First of all I am a photographer, not a social worker, policeman, family member, etc. I am there as an independent photographer. What I do, is take pictures. In many of these situations I went in with the police. They had their job. I had mine. The first time I saw a man beat a woman, I stopped him from hitting her more than once but I got the picture first. Yes, I am divided between whether to take picture or defend the victim, but my instinct is to document the moment. If I chose to put down my camera and stop one man from hitting one woman I’ll be helping just one woman. However, if I get the picture I can help countless more. By taking the picture I am defending the truth.SB. What do you keep in your photographer's black box?DF. My black box is like Pandora’s box: thirty years of crimes against women, and the good stuff too, like love, lust, decadence and enlightened changes. It is made up of the emotions and actions I have encountered, felt, and have been motivated by to take a stand one way or another.SB. Do you remember pictures that you did not take and now you wish you did?DF. It is too painful to think about the ones that got away.SB. Is it true you photographed Philip Jones Griffiths on his death bed? Is this a photojournalist reaction or act of love and grief?DF. In the throes of my bloody labor Phillip photographed our daughter Fanny coming into this world. This is what we did. We documented the whole spectrum of our lives. Taking any picture of anybody is an act of love. Taking Phillips picture was natural. I was documenting our journey, and trying to preserve his strength, dignity and wisdom. 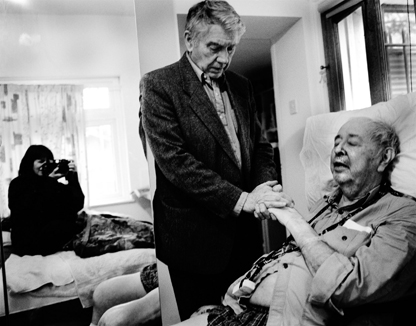 SB. What is the most important lesson you have learned as a photographer?

DF. I have learned to develop animal instincts. I can smell danger, anger, and destructive reactions coming out of a very ordinary moment. Being a photographer requires much more than just looking through the view finder and pressing your finger on a cold metal button. It takes psychological acuity.

DF. In the past thirteen years I have fallen in love with the quotidian life rather than the big dramatic photojournalistic moments. I have found myself appreciating the sweet details of the people, places, and detail of light and shadows where people are not doing anything extraordinary but, when I take the picture, it highlights the moment and reminds us all to not take our lives for granted.

When I was a young photographer, I loved photographing Parisians and their baguettes. As an American I was obsessed with how naturally the Parisians treated their baguettes as oppose to the sterile American style of codifying and wrapping things to death. Now I am doing that again in Syria and in Tribeca. For me it’s all about the staff of life.

My dream was to stop domestic violence and I failed. Now I dream of beautiful moments without any walls of fear.