Daniele Volpe (Italy, 1981) is an award-winning documentary photographer based in Guatemala. His images are chiefly aimed at exploring issues related to human rights and social justice in Latin America. He is also interested in narrating the “human stories” that define Guatemalan society in the aftermath of genocide.His works have also been published in numerous outlets, including TIME LightBox, The Wall Street Journal, Al Jazeera America, Univision Noticias, The British Journal of Photography, The Guardian, el Periodico, il Reportage, Makeshift, 6mois, among others.Daniele was selected as a finalist for the 2015 FotoEvidence Book Award for his work "Guatemala – Ixil Genocide".SB. How did you become documentary photographer? What took you to Guatemala?DV. Exactly when I started to live in Guatemala, in 2007, after I graduated. I worked for a year as an engineer. I saved some money and I decided to change my life, including the job. I became a volunteer in a humanitarian program. It was in a rural area of the Guatemalan highlands, near the Mexican border. It was a deep and fast immersion into the big social problems of the country, starting to understand the situations of Mayan people. There I started my first documentary project. I followed the events unfolding around extractive activity of a gold mine in the western highlands of Guatemala, paying attention to community opposition to the mining project.SB. How did you become interested in the story about the genocide of the Ixil population in Guatemala?DV. I have been living almost eight years in Guatemala and it is easy to understand that many social problems in this country are strongly related to the past, what was happened during the Civil War (1960-1996). It's the main topic. I'm working deeply in this in the last three years because the Genocide Trial turned a media spotlight on the issue. I took this opportunity to look back, to speak about the current pain of the indigenous Maya Ixil, that day after day, for 30 years, have been looking for the remains of their love ones to give them a dignified burial. It's my contribution to fortify the historical memory in the country. 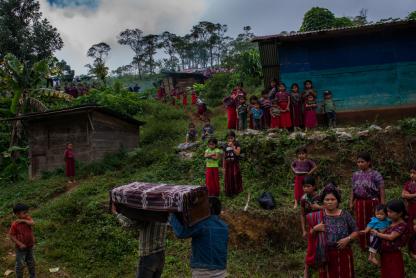 The entire community of Xecol, Chajul, receives the remains of one of the victims murdered by the Army in 1986.

SB. How did you gain access to photograph the forensic evidence of this crime?DV. The State still denies that the national army is guilty of genocide. In this context non-governmental institutions do the work of finding the remains of the victims. The forensic anthropologists work for foundations who collaborate with international organizations to find the limited resources available. They have to respect the legal protocol, working in coordination with governmental institutions (public prosecutor, police). So, in my case, I was in touch directly with the anthropologist's team. All of them are good guys, committed to what they do and with an understanding of their role in this process. In the field, they let me know the limits of the protocol in photographing remains. 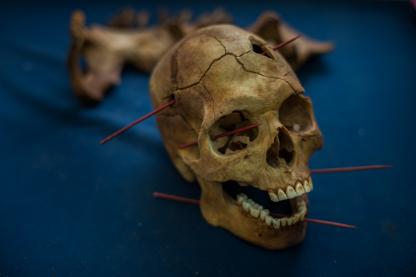 Forensic experts study the craneum and other remains found in a clandestine grave. The needles indicate that the cause of death were four bullet wounds. They presume the victim was executed.

SB. What kind of obstacles did you face documenting this story?DV. Generally I had no problems. But last year, one of the pictures of the project was awarded in POYi. So, a local media called me for an interview. I explained them that I covered the exhumation during the week that the Rios Montt trial was in suspension for the first time. For me this was an important parallelism between these events. A lot of media were covering the trial and the loneliness of the victims’ relatives in the Ixil region. From there I started to receive intimidation and threats by a group who defend the Guatemalan Army. For a couple of weeks I received a lot of message in my Facebook account, first inbox and after publics, using a lexicon typical of the "Cold War". From the trial, Guatemalan society began to polarize much more than before and the extremist right groups grew quickly. This worsened the situation in one of the worst places to work as journalist. 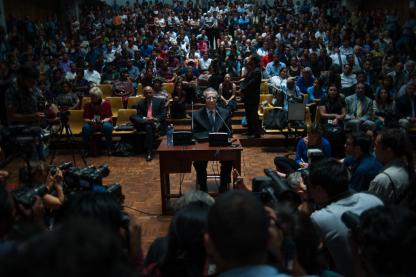 Ex-dictator Efraín Ríos Montt, declares in front of judge Yassmin Barrios during the genocide trial where he is the main defendant.

SB. How long did you work on the story?DV. Conceptually, I started to work on this story before I arrived in Guatemala. I took the first pictures about the issue in 2011. But in 2012, I focused in the Ixil region, I thought to strengthen the story with work from the region, especially when, in 2013, the genocide trial against Rios Montt started.SB. What was it like to travel to the remote areas where the ixil live?DV. The majority of the Mayan people live in the Guatemalan highland, a special place, a tropical forest in the clouds, rich of Mayan ancestral culture. Ixil is just one of over twenty Mayan ethnic groups in the country, with their own language, their own social organization, mores and spirituality. Traveling there is to travel through time, through 500 years of dignified resistance, first against the Spanish colonialism and, in the modern era, against militarism and exploitation. These people live, generation after generation, in a constant aftermath or conflict. All of this is possible to feel where they live.SB. How did it feel to be with families as they searched for the remains of their loved ones?DV. It's a really surreal situation and, of course, really sad to share those moments with the victims relatives. Just try to think what they feel finding their relatives’ bodies, after so long a time. It is not easy to describe. Personally, I felt worse when I began the editing of the pictures each day, when I have more time to reflect on the situation I had lived.Many in the new generation, who didn't live those bloody years directly, know almost nothing about what happened and deny that the government was involved, as a way to deal with the genocide.I became close with many of them. I returned and shared some print pictures with them. I felt that pictures, in general, and these pictures in particular could help to make a link between them and their memories. Perhaps my pictures will be useful in the future to tell that story to their sons and daughters. 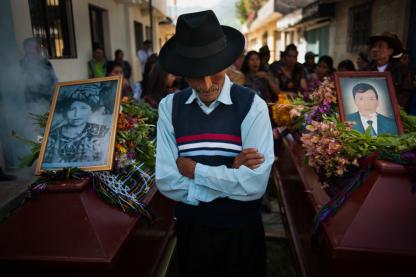 Pedro Rivera participates in the funeral of the 31 victims of the Xecax massacre, perpetrated by the Army in February 1982. Among them is his aunt, Magdalena Rivera (left). Nebaj.