Brenda Ann Kenneally is a mother, documentarian and interdisciplinary artist living in Brooklyn. Kenneally’s obsession with capturing a core truth of the people she photographs earned her The W. Eugene Smith Award in 2000 for photographers who work in the tradition of the legendary Life Magazine photographer.Her long-term projects are intimate portraits of social issues that intersect where the personal is political.Her book and web publication MONEY, POWER, RESPECT; Pictures of My Neighborhood received numerous awards: The W. Eugene Smith Award for Humanistic Photography, a Soros Criminal Justice Fellowship and The Mother Jones Award. In 2006 the multimedia project won the Best of Photojournalism award for overall Best Use of the Web by the National Press Photographers Association.The multi media work that she was commissioned by The New York Times Magazine to do for the first Anniversary of Hurricane Katrina, was nominated for a Pulitzer and the feature production by Media Storm won a Webb Award.SB. How did you become interested in photography? Do you remember the first picture you took?BAK. I came to photography out of desperation. I was floundering as a young person after I left home in my very early teens. I tried many things to give myself a sense of purpose and identity. With the help of alcohol and other mood altering substances I came to a spiritual bottom. I slowly found my way to a self that never did really form until I stopped using chemical enhancements. I used various support groups to help me and I found what you call a spiritual mother in one of these groups. This woman changed my life. I had taken a photo class at a local junior college and had a picture of a squirrel on a garbage can that I developed in black and white film and printed myself. My new “mother” suggested that this seemed like something that I had a talent for and for once I listened to someone and so I became a photographer. This was a miracle, as I never listen to anyone and there was no reason to this time, except that I realized I had run out of answers. Had I not been so vulnerable at the time – I might not have become a photojournalist.SB. Are your images a photo evidence of something?BAK. In the most human sense I fell that they are evidence that I, and everybody in the photos, were here -- we lived. And they say you live as long as the last person who can remember you. Maybe this is the only reason to take picturesSB. Why did your turn your lens towards the underprivileged?BAK. I do not like this phrase underprivileged. I feel that if you look at the distribution ofwealth in this country – the vast majority are comparatively underprivileged. We are finally beginning to talk about it – though it has taken the voices of those who have been trained in a certain kind of entitlement to get the conversation going. I thank them for that; however there are bona fide cultures that exist in the US that have been formed in relationship to their economic and social status – and that is on both ends of the spectrum. I am documenting some of those cultures and looking at the context in which they are shaped.SB. Your images write a history of the American family. What are your expectations for them in the present time: to provoke conversations, to alert or to help?BAK. I do believe that the personal condition is an accurate indication of political and social attitudes of the times in which people live. I believe now that the best I can hope for in my work is that it represents a good memory. A good memory for all of us who were involved in making it and that it is included as part of American history, rather than apart from it. If you look at the work as a family album it makes it approachable and a way to begin a conversation on common ground. After all, isn’t America built on family values and what we all want to preserve. 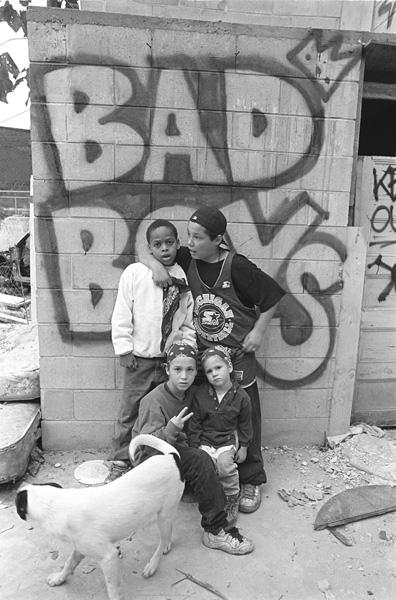 SB. What attracts you to do open ended projects? How many projects are you following now?BAK. I have three projects now in various stages of production: The Upstate Project, I am editing a film and book that I shot about my dad during the last six years of his life. He died 2 years ago and we agreed that I would not look at the stuff till after he was gone. It is so powerful hearing his words to me now and there are hundreds of hours of footage to look through. I edit with my dearest friend Laura Loforti every Friday. We call them fast Eddie Fridays. I feel like my dad is parenting me from the grave and I will be sad when the editing is finished, as I can never have that intense interaction with him again. This is a common feeling about all my projects. The Brooklyn work as well, which is my 3rd project. I keep going back to Andy – the main boy in the “Money Power Respect” book – as I see how his life is developing and each moment is more or less important than the last. When I stop it is as if my life with these people ends. In the case of my dad’s work it really will. I sort of never want that to happen. 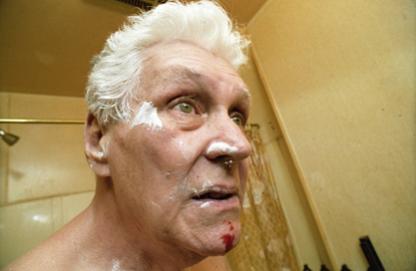 SB. Is it difficult to established trust with your subjects? Why do they accept you so close in their intimate life?BAK. I establish trust in photography the way anyone starts and maintains a relationship. I show up. I am interested. I hope the other party is interested in me. I reveal as much or more about myself as I would want them to do of themselves. I am myself at all times, or I try to be. I am honest about what I do. I notice after years of doing what I do that people see that I am passionate and I work hard. I think the hard part for some to understand is why I do this really for no monetary reward. In fact many who have visited me and see the way I juggle money to keep going wonder why I would do this at all. Only perhaps an artist or an obsessive person might understand this. This kind of documentary work requires a kind of obsessive pathology and stamina. Also one must have a big empty space that allows for complete integration of life and work. Luckily for me I was born with this empty space. Some call it loneliness. I say it is a gift.SB. Do you worry about being emotionally bound up with your subjects'?BAK. I only worry about not being emotionally bound with my subjectsSB. Often photography is described as objective coverage of reality. Do you agree with this or do you think it is more a personal reflection of who you are?BAK. I absolutely always say that the pictures that I make are about me. And, of course, I do not know anyone who can truly leave themselves behind in all situations. Even the most altruistic acts have personal motivations. This is why it is so important that we hear all voices in the news media, etc., as there is a danger that folks with less power resources and a less healthy senses of entitlement won’t get their work in places where it needs to be seen. It can be intimidating. Luckily, I have met some amazing people who helped me negotiate the world of my work and the editorial world that it needed to live in. My first assignment was “Drugs in the Blood”, part of my Brooklyn work, for the New York Times Magazine. It was a real life changing experience. It was like speaking two languages at once. Luckily Kathy Ryan was an astute interpreter and it gave me the confidence to go on. 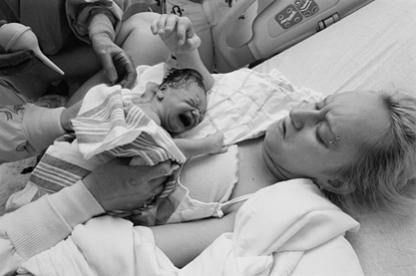 Anthony being born, 2004. This birth marked the beginning of my “Upstate Girls” project.

SB. Where are you in the stories you photograph?

BAK. I am in the story. My voice is being heard. I write from my personal experience. If I am a reporter I report what I see and I use words. A lot of great print journalist, like john Anderson from The New Yorker, write from a personal prospective so I don’t see any difference when doing visual reporting.

SB. You are one of the Facing Change photographers. What are America's most urgent issues to be photographed and preserved for the history and why?

BAK. The growing economical and social desperation in US is something I have been looking at for the past seven years in my work from Upstate NY and connecting this income gap back to the Victorian era when it was the time of haves and have nots. The most damaging thing in the US is the illusion of a classless society. These are the myths that Facing Change, and in fact documentary photography historically, have tried to dispel.

SB. In your opinion is documentary photography facing a change?

BAK. For sure, I feel that photography itself is becoming more youth oriented. I believe that is because of the link to technology. So the double-edged sword of change has more demarcating space as the old way to disseminate work is negated by the need for the younger, newer, more cutting edge methods, and that translates to youth. I used to be quite cocky in my thinking that the choice to be an artist or independent maker of content would give me a kind of immunity from the inherent disposability that workers experience under capitalism. the logic is, that since I do not have a "real job" then I can remain useful as long as i live - only my physical state can determine my retreat from the photo world. Now it feels as if this kind of practice is akin to working on an assembly line that is speeding up and soon will be obsolete. I am not saying that the content will not be necessary. In fact the media world is a growing beast that constantly needs to be fed content, but sadly it is the content makers that seem devalued. This dance with technology is of course one of the biggest challenges that the entire world faces when thinking about how it's population will earn a sustainable living as we move into a more automated future.

SB. Do you believe in the power of photojournalism for social change?

BAK. Yes. However the paths to get there are changing.