Amber's interest is in the intersection of photography, journalism and public service with a special focus on issues affecting Indigenous people. With the rise of movements like Idle No More, communities are increasingly empowered to fight for a more just relationship with the government and non-native people. She is looking for ways to represent and foster that strength while documenting issues around culture, environment and the effects of inter-generational trauma from colonialism.Her work "Standing Rock" won the 2017 World Press Photo first prize for contemporary issues. She is a member of the Rogue Collective. You have a special interest in documenting social issues affecting first nation people. Why is this?For a long time I've had this feeling like I have unfinished business in Alberta and I am finally starting to     be able to articulate what it is. On the surface, I'm motivated by the inequality facing Indigenous people. I want to do work that has the potential to help people, and here in Canada there is no other group as consistently marginalized. I've also been inspired by the amount of grass roots organizing going on in many Indigenous communities, it's created a dynamic where I can document their good work and ideally draw more support for their initiatives. More deeply, there is also a lot of personal connection to their stories because the ongoing story of colonization is mine too. I'm a descendent of settlers here, I still know where my family's homestead is and which people were displaced so I could grow up here with relative privilege. I can't change the past but I can look for ways to contribute to a more just system and healing the damage we have done. How did you find yourself in North Dakota covering the Standing Rock protest against the construction of the Dakota Access Pipeline?I had been watching the camps develop over the spring and summer but it was clear by September that the scale of the movement was really something new. It is not at all the first time that Indigenous people have camped or tried to physically blockade a development after an insincere or rushed consultation process on their territory. There are ongoing camps in Northern BC at Unist'ot'en and on the coast at Lelu Island. But often these confrontations are localized, poorly funded and very rarely make international headlines. At Standing Rock, they had reached such a critical momentum they could not be ignored and I needed to see it up close. 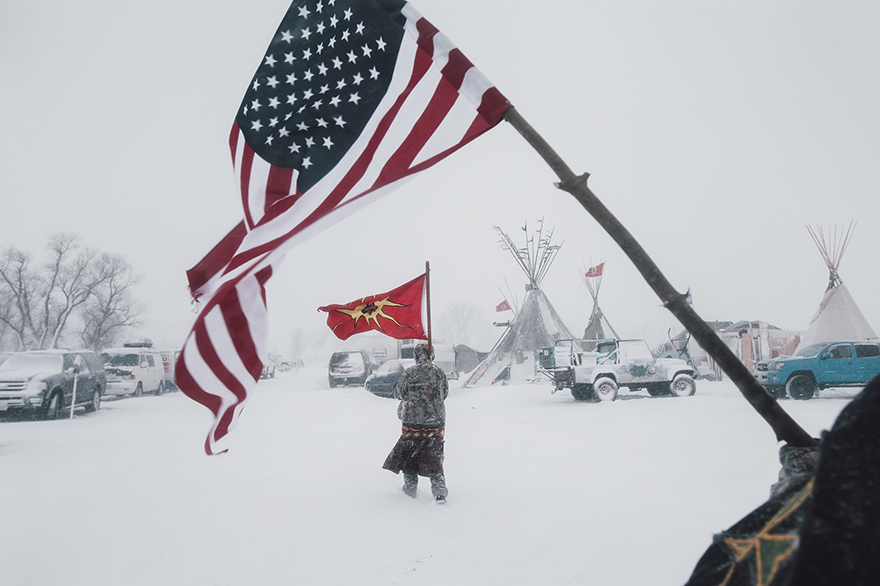 Two nations - Veterans carry an American and a Mohawk Warrior Society flag through the storm. The Mohawk flag came to prominence during the 1990 Canadian Oka Crisis, when the military confronted indigenous people in a major armed conflict for the first time in modern history. Camp is dedicated to stopping the Dakota Access Pipeline (DAPL) "in a good way" but there is some fear history will repeat itself, again.How many times did you visit the Dakota Access pipeline protest? Did you stay with the protestors?I made four trips, for a total of around 6 weeks. When I was there I mainly stayed in the water protectors’ camps, either in a tent or camping in my car. It helped me to be closer to what was going on and cut down on travel time. When it got colder, I had friends who let me stay in their hotel rooms and that was a lifesaver.What was the atmosphere in the camp with almost 8000 people representing 220 tribes?The atmosphere was fluid and changed over the course of the year but it was founded and led with prayer and I think that did so much to preserve a common purpose and sense of community. When I first arrived in September, when populations were at their peak, everyone was really positive and buoyed by the momentum. People were so open, and enjoying meeting and talking and planning. Lot's of people commented to me about how nice it was to interact with white people without fearing a racist response. By December there was a lot more uncertainty and there was some fracturing in the leadership between some factions in the camp and the tribal administration. People were still kind and peaceful but there was just a whole lot more tension as people tried to decide what to do next. February was a kind of an ending and there was a bit of sadness mixed with determination and an edginess around a fear of how the evacuation would be administered. 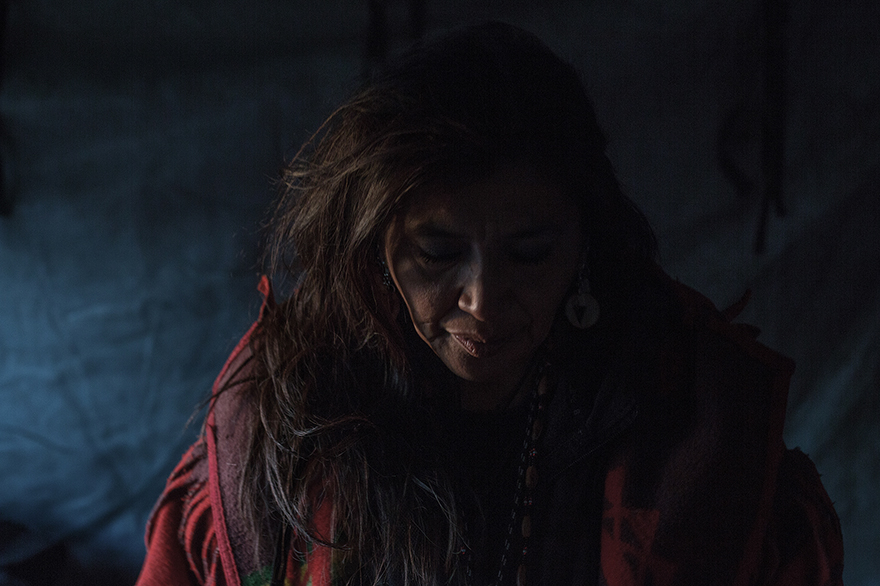 Since Wounded Knee - "I don't want to be killed here. I came here to live with my children and my children's children,"  says Vonda Long, descendent of High Hawk, who was killed in the 1890 Wounded Knee Massacre. She says she carries trauma from colonization but has been fighting for justice her whole life as a member of the American Indian Movement. "That's what you do. You sacrifice for your brother."What was your daily routines while covering Standing Rock?Usually I would get up very early, between 5 and 7 am depending on the day and photograph until the sun got high. Mid day I would process photos, find out about what might be going on, write, make contacts and set up meetings, or nap. I'd always be out shooting again by late afternoon and work until the sun was gone, sometimes into the night. I'd head to bed and repeat.What fascinated you most? What drew your eye?I'm not sure I can exactly define it, but I do always look for light. I did my research but after that I was trying not to overthink and let the moments guide me to something that felt authentic. I knew I couldn't do a definitive timeline of what happened there, so I was looking to interpret the spirit of the place and frame it all in a larger context. The imposed pipeline is not an isolated event and is fully part of the ongoing history of colonization.Where there things that were difficult to witness?Yes, definitely. Most of the public demonstrations went peacefully but when they didn't, it was really difficult to see people being attacked with “less-lethal” weapons. Even though the guns were loaded with rubber bullets, it was uniformed officers shooting weapons at unarmed citizens. 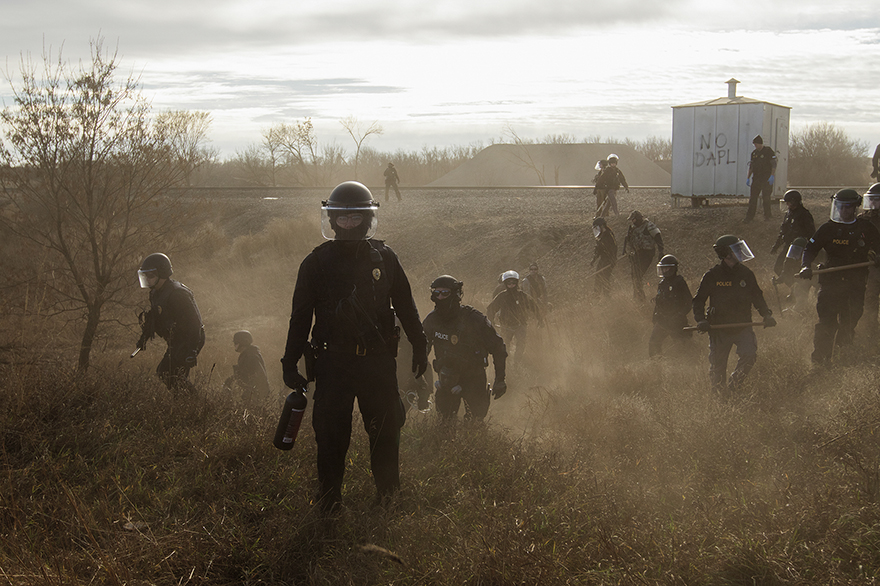 Morton County Sheriffs - Riot police clear marchers from a secondary road outside a Dakota Access Pipeline (DAPL) worker camp using rubber bullets, pepper spray, tasers and arrests. In other incidents they've employed militarized vehicles, water canons, tear gas and have been accused of using percussion grenades.The Lakota like to say that they are the only nation to defeat the US Army twice. Some compare the Standing Rock protest with the battle at Little Big Horn on June 25th, 1876, also known as General Custer’s Last Stand? This time the battle was the spirit against the grid. Who do you think won it?Well, that pipeline is completed and flowing with oil so it looks like industry won this battle. But in the larger fight for treaty rights and human rights the Standing Rock Sioux are still at war. The connections made in those camps are strong and I think we will see more organizing in the near future. 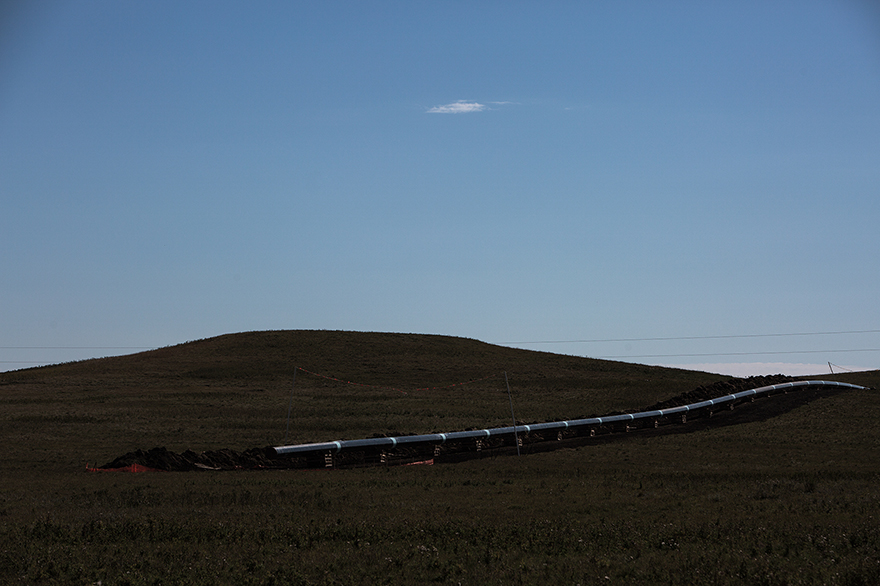 Black Snake - DAPL, if completed, will be approximately 1,172 miles, and pass under the Missouri River. The project is at a standstill since the Army Corp of Engineers denied the permits for Energy Transfer Partners, the company behind the project, to drill under the Missouri.Were you surprised to receive the most prestigious World Press Photography Award in the Contemporary Issues category for this work? Has the award changed your professional life?The award was utterly unexpected and it took a little while for it to really sink in. It's the first time for my work on a stage like that. When I was making the work, I just wanted to make something good, something true that I could feel good about but didn't expect it to be awarded at all. I don't know yet if it's changed my professional life but I think there are more doors open to me and I'll be so grateful if it makes it a little easier to keep doing the work I want to do. Right now I'm just refocusing on other ongoing projects, all I'm really in control of is whether or not I do the work, and I'm really digging into that the best I can.The World Press Photo exhibit travels to around 100 cities around the world. Do you feel that you contributed to social change by exposing the events at Standing Rock?I don't think that anything I did exposed Standing Rock: it was probably the most heavily covered Indigenous movement since Canada's Idle No More and drew so many incredible storytellers from inside and outside the community. There was also a lot of first person reporting on social media that helped to propel the message in a really direct way so I'm pretty humble about my role. But, if some people connected with my photographs then I'm glad and I did my job. I think it's a lot to expect to always be     able to measure the impact of one set of photos but to me this work is not about an individual but about reaching a critical mass. The platform of the World Press exhibit is pretty incredible and takes the story so much further than I could on my own. I hope it triggers conversations about the machinery of the system, rather than just the battle over one piece of infrastructure. 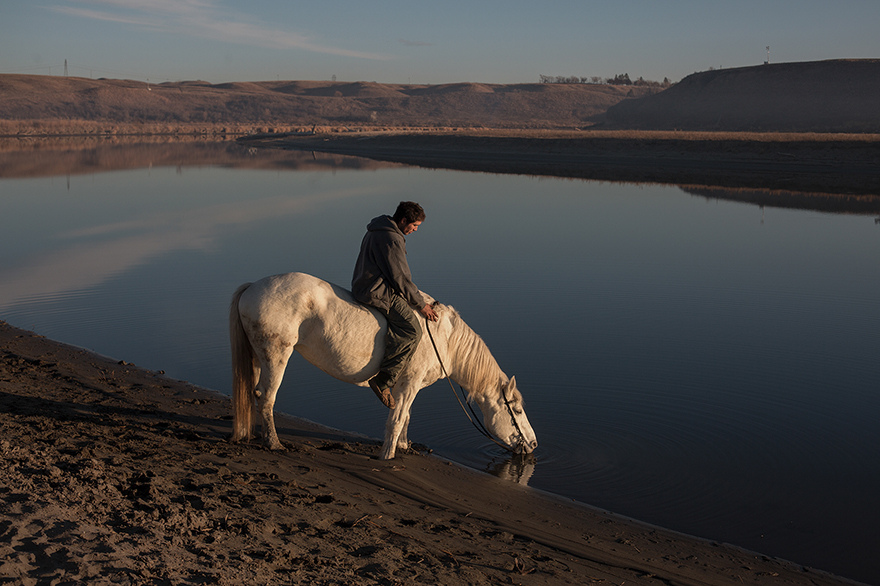 Land, water, horse - Horses are central in Sioux culture, described "like my brothers," by one youth. To have traditional governance and lifestyles, including horses, on the land is deeply healing and is fundamental to the pipeline resistance.