The Longing of the Stranger Whose Path Has Been Broken

A Chance to Breathe

WE CRY IN SILENCE 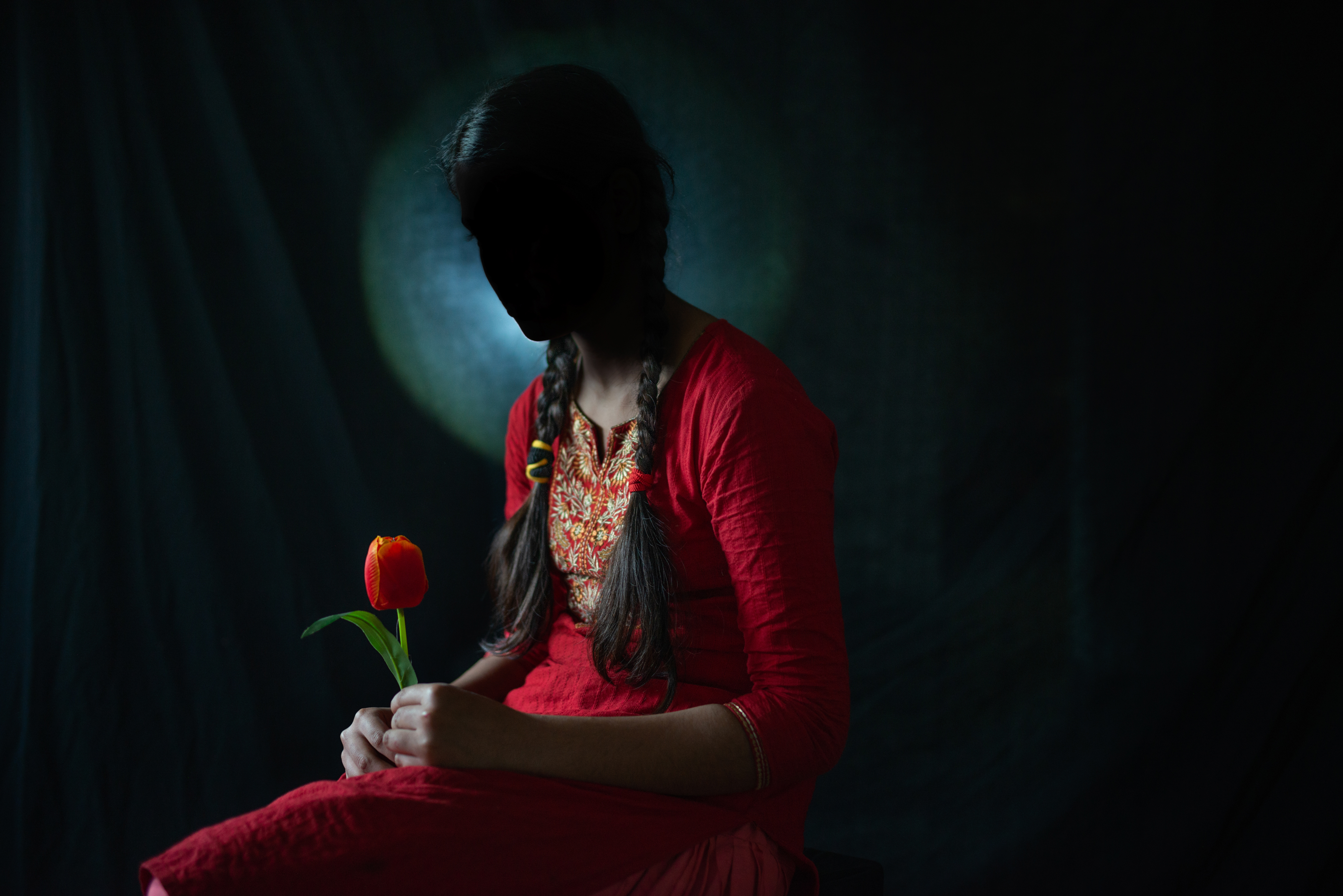 The We Cry in Silence initiative by Indian photojournalist Smita Sharma, in partnership with the FotoEvidence Association, is designed to expose evidence of sex and domestic trafficking. The project aims to educate young women and the general public about the methods traffickers use to lure and abduct girls from Bangladesh, Nepal and India. Organized around Sharma’s images and research the We Cry in Silence initiative will include the publication of a photo book, a newspaper quality Zine for free distribution, traveling exhibits and community events.

Meena finished her daily morning chores and was on her way to school in rural West Bengal, India, when she met a man who professed his love for her. At the next meeting, he convinced her to elope with him to Delhi with the promise of marriage. A week later, Meena found herself locked in a brothel in Agra.

Smita met Meena in 2015, after she was rescued from the brothel by the Anti-Human Trafficking Unit of the police. After speaking to her, she was astonished to learn how Meena was trapped so easily by a man she hardly knew. Smita has been investigating child sex trafficking since she met this young girl. India is home to more than 400 million children below the age of 18 years and thousands of children go missing every year. The situation is similar in Bangladesh which shares a long, porous border with India. The government estimates 50,000 girls are trafficked to India every year.

In her research, Smita also discovered “employment” agencies that traffic girls into domestic servitude. Charging employers for a year and pocketing the money, while leaving the girls to live like slaves.

WE CRY IN SILENCE investigates the widespread but underreported issue of trafficking minors for sex and domestic servitude between Bangladesh, Nepal and India. The project unveils the vulnerability of girls and highlights what leads them into the traps of traffickers. The goal is to understand this complex, global issue at the local level, open a dialogue, and move people to work towards a solution. 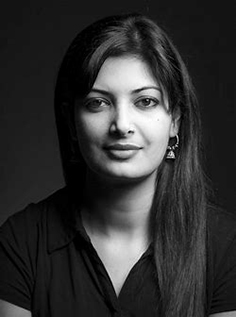 SMITA SHARMA is an award-winning photojournalist and visual storyteller based in Delhi, reporting on critical human rights, gender, and social issues in her

own community as well as in the Global South on assignments for Human Rights Watch, National Geographic Magazine, TIME magazine and other publications.

From documenting the effect of pregnancy on girl’s education in Kenya to child marriage in Nepal, and sex-trafficking across India and Bangladesh, Sharma is committed to representing people with dignity and telling underrepresented stories with impact.

Sharma is a TED Fellow and an IWMF Reporting Fellow. Her work on sex trafficking published as Stolen Lives in National Geographic Magazine in 2020 received the Amnesty International Media award for Photojournalism in 2021. Recently, she won the prestigious Fetisov Journalism Awards in the Outstanding Investigative Category for Stolen Lives. Her work has been exhibited and shown globally including at the UN Headquarters in New York.

THE FOTOEVIDENCE ASSOCIATION plays a unique role in the photojournalism ecosystem, as the only publisher of long-form visual stories dedicated solely to human rights and social and ecological justice. FotoEvidence views the photojournalists it supports as change agents and works with a network of presentation and exhibition partners to provide exposure for the photographers and the issues they address, reaching both decision makers and the public with visual stories that move people to action.

FOTOEVIDENCE VIRTUAL GALLERY: The virtual launch of the We Cry in Silence initiative is scheduled for the 15th of March, 2022 and will be organized in the 3D virtual gallery with an exhibit of the work of Smita Sharma, short movies and stories. This will be a first of its kind interactive gallery where up to 30 people at a time can interact while visiting the gallery. The gallery will be accessible from anywhere in the world and we are planning several presentations and walk-throughs with Smita Sharma.

Whant to join us at the opening? Drop us a line: info@fotoevidence.com 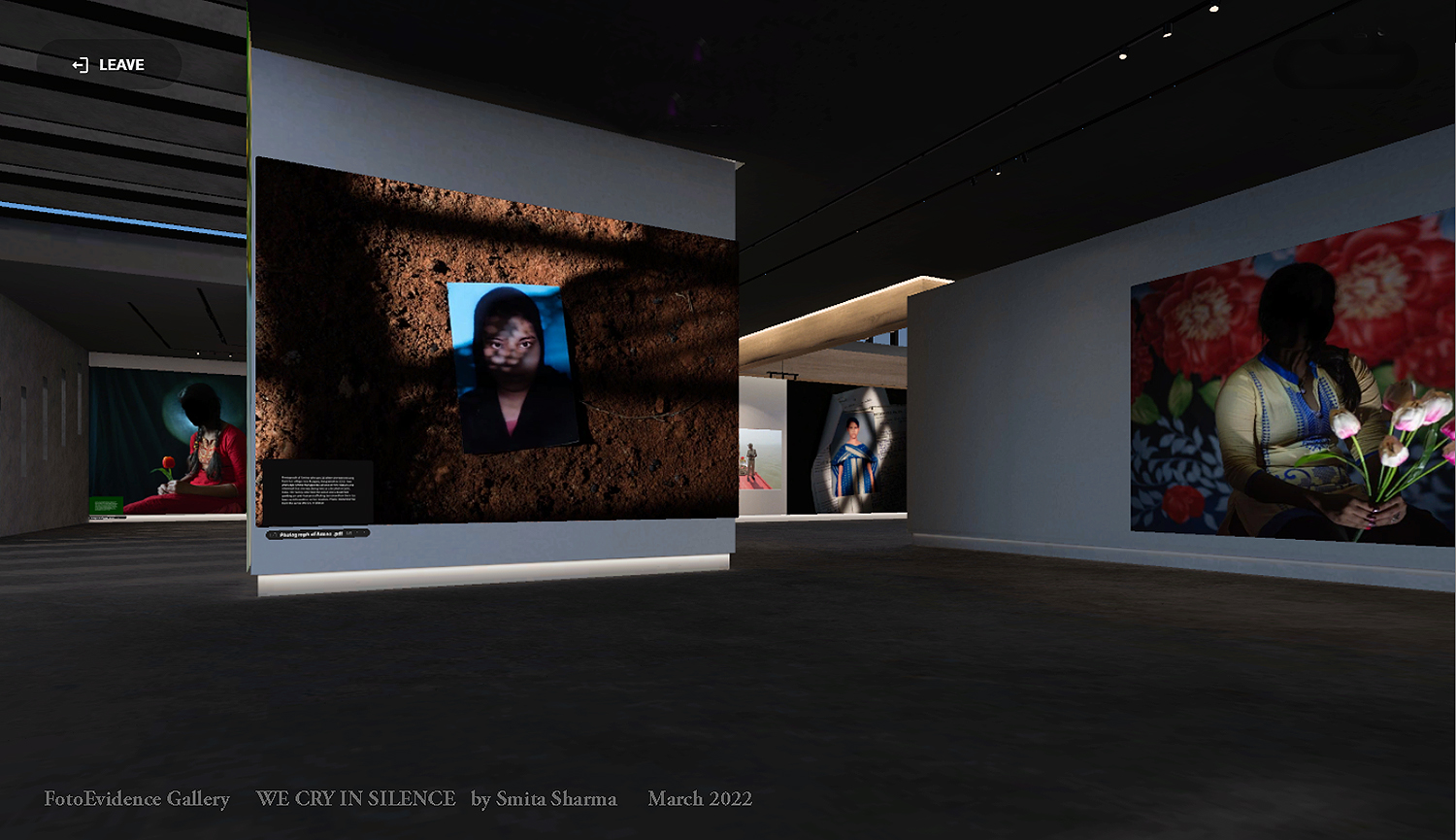 FOR MORE INFORMATION ON THE INITIATIVE Director of the We Cry in Silence initiative Smita Sharma- smitasharma3@gmail.com or Artistic Director: Svetlana Bachevanova, svetlanat@fotoevidence.com

Smita Sharma has photographed and interviewed more than 35 young survivors of sex trafficking in India and Bangladesh. She has also interviewed traffickers to understand the methods they use to psychologically manipulate vulnerable girls. Her direct intervention also led to the rescue of a 17-year-old girl from the red-light districts of Pune in India.

WE CRY IN SILENCE with the testimonies of these victims will be published as a photo book by FotoEvidence and distributed to schools and college libraries in India to create permanent evidence and raise awareness. The book and Zine will also be made available to local law enforcement agencies, with the goal of sensitizing them to the dangers young women face and the methods of traffickers.

The book will be tri-lingual in Bengali, Hindi and English. 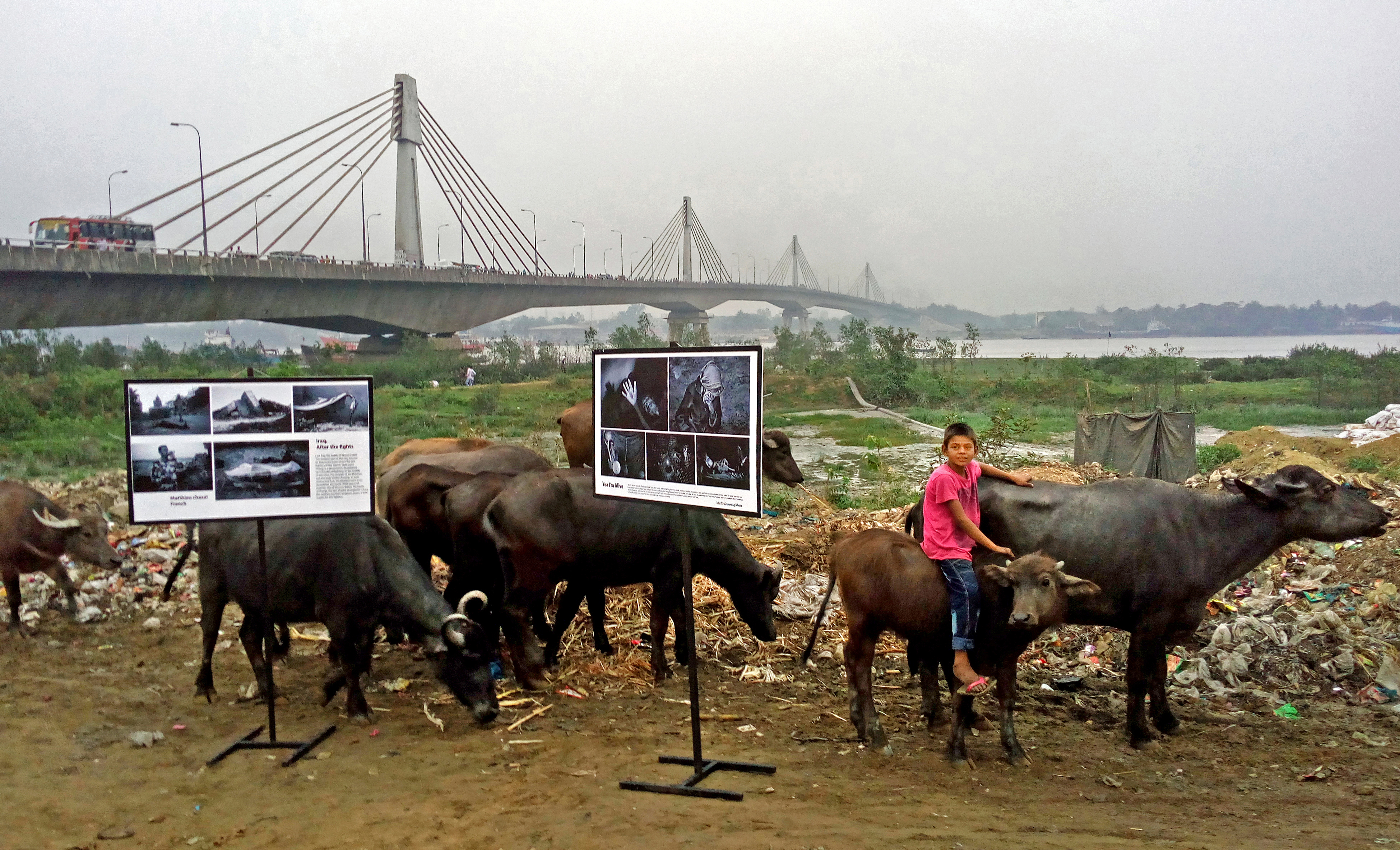 To bring the project into communities, the We Cry in Silence initiative will mount a traveling exhibit that will visit some of the cities where human trafficking is concentrated and several rural areas of Bangladesh and Nepal. The traveling exhibit and associated Zine will use the images and stories, that are part of Sharma’s seven-year investigation, to raise awareness and inspire communities to respond.

The 12-page We Cry in Silence Zine will include testimonials of survivors with their images,  and educational material like  general safety measures and contact information for local anti-trafficking organizations. The Zine will be distributed for free during the traveling exhibit and community events.

The traveling exhibit, distribution of the Zine and the organization of community events will be undertaken in collaboration with several local partners.  These include: Shakti Vahini is an Indian advocacy organization for human rights and democratic institutions with a focus on strengthening women and children’s rights in India. Samlaap India is an anti-trafficking organization founded in 1987 that works to educate, prevent trafficking, and assist in recovery of victims. VOHH Institute of Photography (Voice of Humanity and Hope) is a media, educational and advocacy organization in Bangladesh with experience mounting movable exhibits in the region. 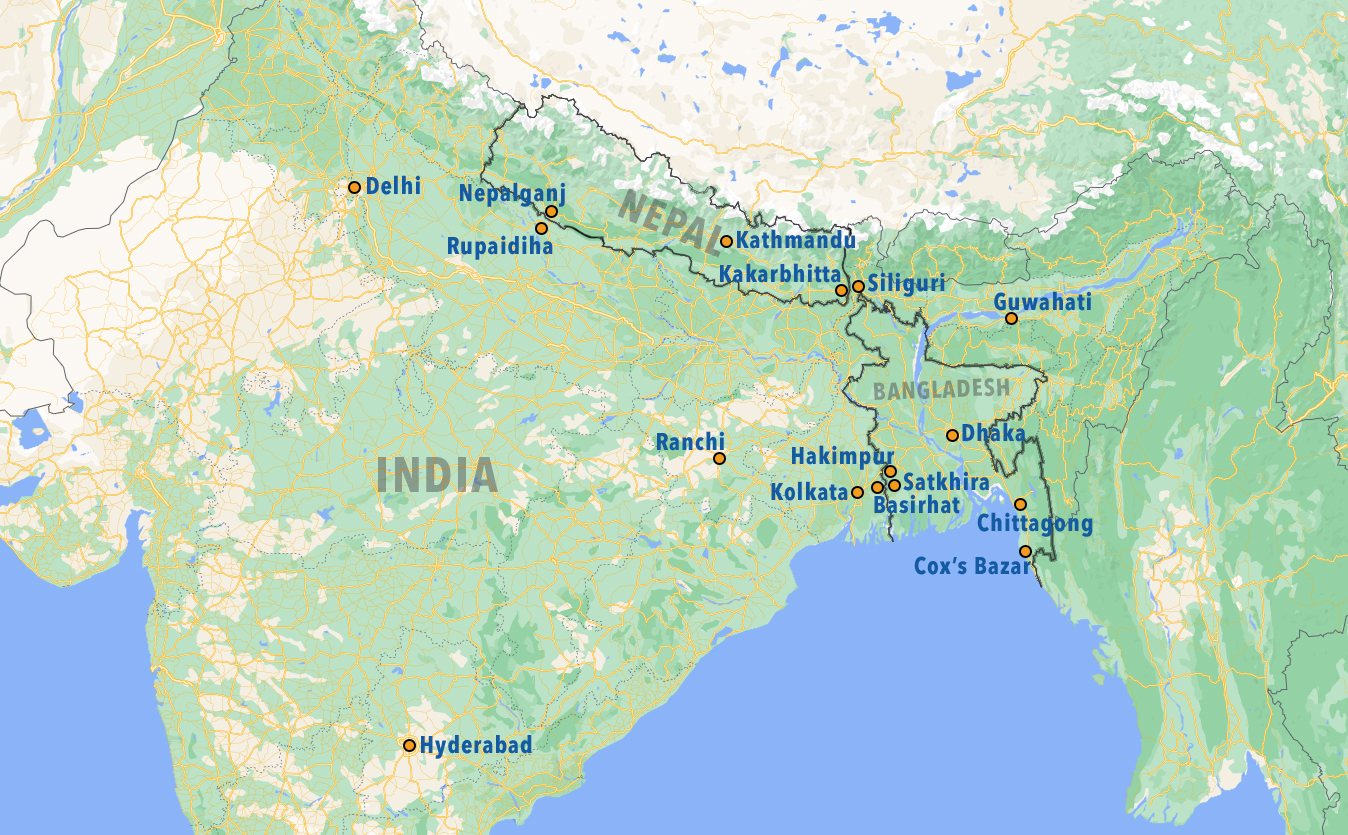 Cities along the border of India with Nepal and Bangladesh with established  paths for trafficking young grils. Every red dote represents  a location where We Cry in Silence educational events will take place.

In collaboration with Sanlaap India Smita Sharma will organize community presentations throughout the region. These two organizations have staff or established relationships in each of the locations indicated on the map. The presentations are designed to educate young women about the methods used by human traffickers and about their rights in the face of trafficking.

More to be confirmed.

Join the We Cry in Silence team by becoming a supporter

For information on the initiative or to provide support contact:

Director of the We Cry in Silence initiative Smita Sharma- smitasharma3@gmail.com