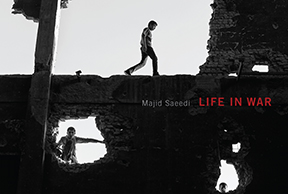 Life in War by Majid Saeedi- AVAILABLE ONLY IN THE USA

Life in War by Iranian photographer Majid Saeedi is probably the only book about Afghanistan that doesn’t show images of war. For ten years his camera photographed daily life in the context of war.  Speaking the language, Majid embedded with the Afghan people rather than with an alien army. His photographs reveal the humanity of a people living through decades of war.

"His sensitive eye, artistic vision, journalist’s skills and intimate access combine to create this illuminating portrait of a country we in the west only see through the eyes of military intervention, the deaths of our soldiers, the failure of our policies and the abject vision of this country’s people, culture and way of life."

From Ed Kashi’s introduction to Life in War.