Each year, during the dry season, family members of the ethnic group Huicholes, from the Sierra Madre in Nayarit and Jalisco, leave their communities to look for jobs as day laborers; growing, cutting and harvesting tobacco on the northern coast of Nayarit state, in México. Most of the workers travel with their entire families: pregnant women, kids and new born infants included. Working at the tobacco fields means that they are in permanent contact with chemical pesticides and fertilizers, a risk that affects all the workers but specially the native Mexican people because as itinerants they end up living in the tobacco fields. They don't have a proper place to wash their clothes and themselves, so they stay in contact with the chemicals during the whole season. At the same time, they don't have clean drinking water, so they drink from one of the most contaminated rivers in México, the irrigation canal that comes from the Santiago River.Most of the tobacco production in Nayarit goes to companies like British American Tobacco and Philip Morris International. Despite their billions of dollars in earnings, the companies haven’t taken responsibility for their workers, even when they work 20 to 22 hours a day. The tobacco workers are payed so poorly that, very often, they don't have enough money to buy food for an entire week. Philip Morris International says that it, “has developed a comprehensive agricultural labor practice program to progressively eliminate child labor” and that, “includes the following provisions: No person below 18 is involved in any kind of hazardous work.” Despite this program for eliminating child labor, the tobacco producers that sell tobacco to Philip Morris International and British American Tobacco still use child labor.Around three million children between five and 17 years of age are working in a hazardous environment in Mexico. This is 12.5% of the population of this age. One million of them are under 14 years.According to the UN, in Mexico about 45% of child laborers have some degree of malnutrition. In Nayarit, 7% of the children have malnutrition in grade 3.This is the real cost of cigarettes. 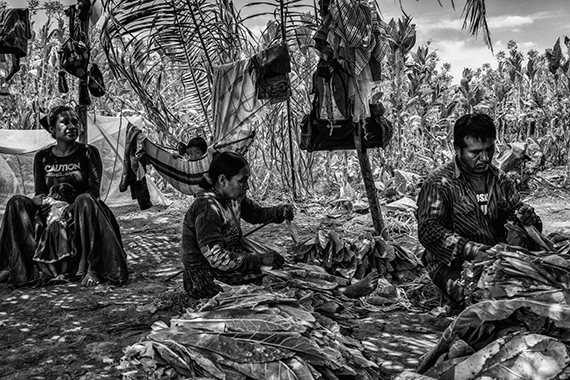 A family of tobacco laborers working at their makeshift tent in Amapa, Santiago, Mexico. 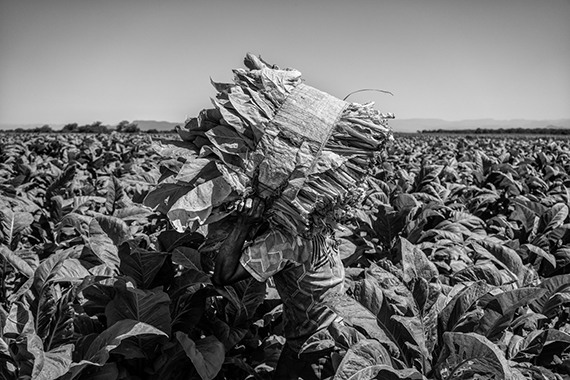 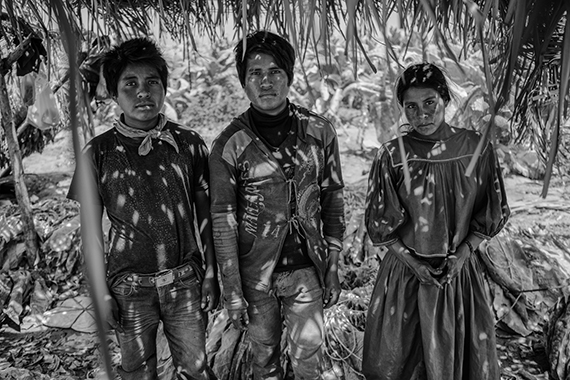 From left, the siblings Agustin, Felix and Maria, who worked as tobacco laborers in Santiago, Nayarit. On a good day,they would earn 200 pesos,equal to $11,working 16- to 18 hour shift. 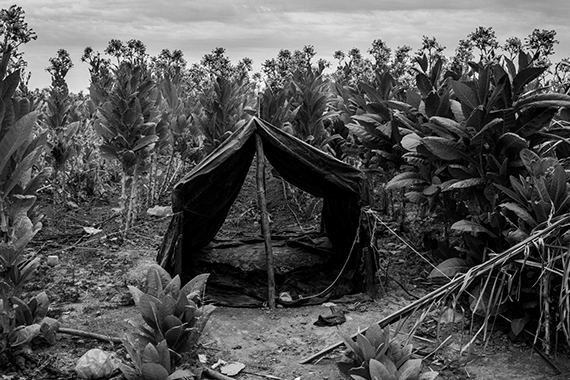 The home of Antonio Escobedo, a tobacco laborer, for the tobacco season. He would sleep, eat and work there for five months. 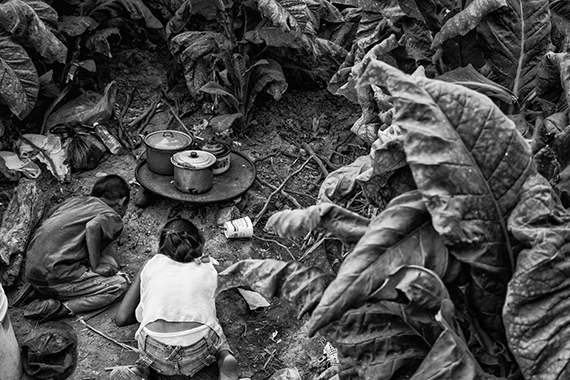 Two siblings checking the fire of their makeshift stove in the middle of the tobacco fields. 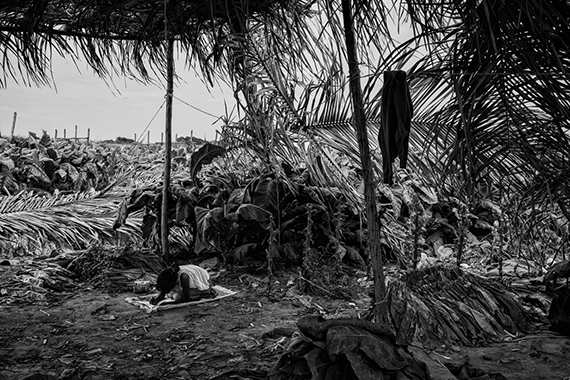 Maria takes a break from the work in the tobacco fields to color a book. 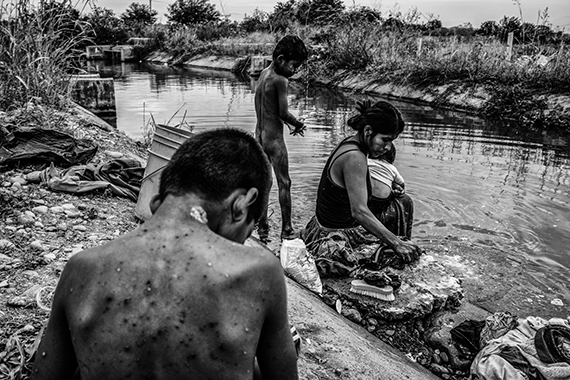 Yolanda and her children lived on the same tobacco plantations that they worked on. Yolanda’s sons,Ernesto and Abelardo, had severe skin infections and large welts from chemicals. 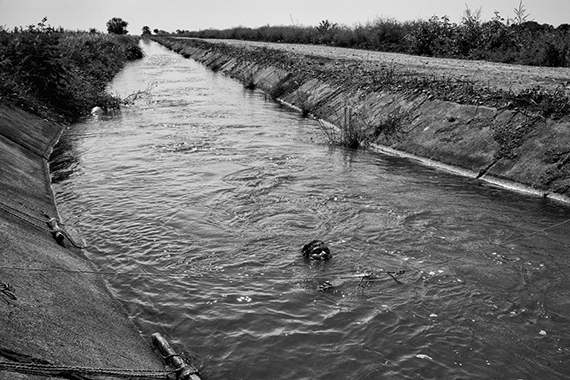 Arturo, 12, taking a bath in the irrigation canal, where he sometimes ingests the polluted water. 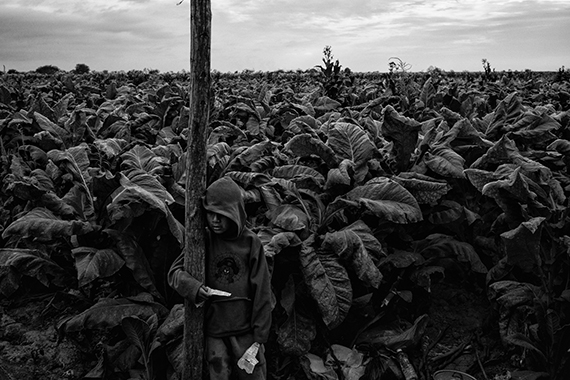 Andres, 9, taking a break from the work. 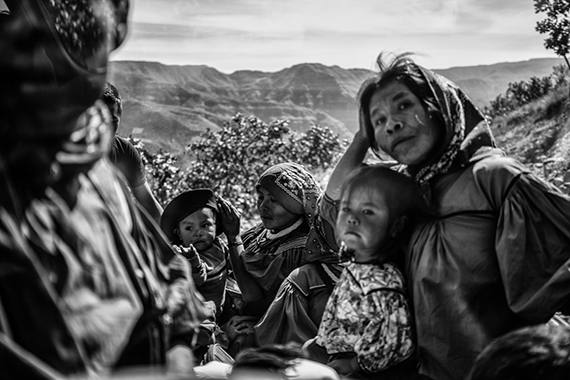 Pedro Hernandez and his family, from Cajones, Jalisco, riding in the back of a van. They were going to the community of Huejuquilla to take his son, Carlos, to the doctor. 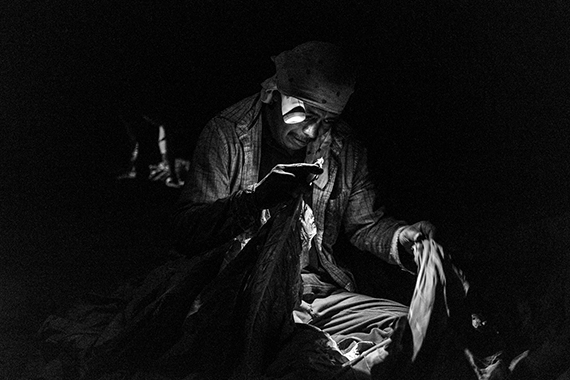 Juan Chavez has a little lamp that he fastened to his head with a scarf so he could continue working until 3 or 4 in the morning. He would wake up again at 6 a.m. to go to work. 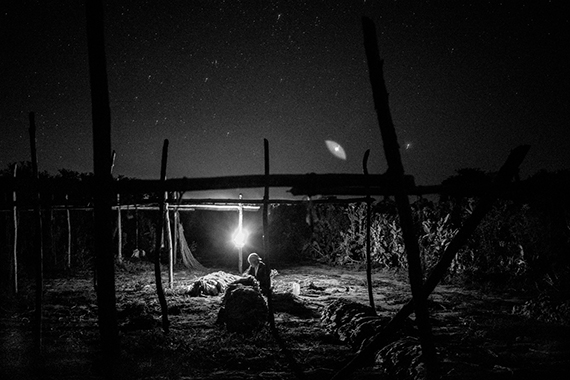 Carlos Vazquez, 32, comes from Mesa del Caiman, a community in the mountains of Nayarit, Mexico.

tobacco we can cut and the faster the better.”