For a long time, I have returned off and on to the same topic - abuse and violence against women. Working for years in Armenia on the same topic, I have shared a lot with viewers and you may already be listening to stories like this more or less with a cold heart. But it is not possible to listen to such stories without tears. Karimova Saida in her village. She got married when she was 22 years old. She didn’t want to marry that man but, as she didn’t have a father,  her uncle was making decisions and he said that it was easier to marry not educated. They lived together seven years and they were good with each other. Then, her husband went to work in Russia. When she called him, she heard a woman’s voice. Her husband denied there was another woman in his life. But, one day, after another phone call, he said that the woman was his wife. When he came back, Saida was sent to her parents’ house and never went back. Years ago, one of my friends told me that in Tajikistan women can be divorced even through a sms. How is this possible? I jumped on my feet. Years passed after that, and those women never left my mind. Our problems are the same. There too, as in Armenia, men go to work abroad, marry and stay in Russia, and very often divorce their wives through a sms, if these are just religious marriages. Lately, the law prohibits these kind of divorces but they nevertheless persist. I spent almost a month in Tajikistan. I have known the country since my childhood. I have known the people, so that I was feeling like a fish in water there. But the stories of the women were not easily found. I didn’t wait, though. I went and started shooting but If not for the help of an acquaintance, the veil wouldn’t have been lifted. This is the first story of mine made in Tajikistan but the next will follow. The rights of women in Tajikistan are not protected at all. Men are allowed to have several wives, to divorce easily, and not carry responsibility for the wife and children. We found one woman following her announcement in a newspaper. Her husband had left for a job abroad, leaving behind his wife and children. The wife had tried to find him without any result. Later, her announcement in a newspaper had helped her find her husband and  she demanded he pay alimony for his children. He had stopped helping his family after paying them for a year. Divorced women are given just a room from the husband’s house without kitchen and bathroom of course. Women live a very difficult life and sometimes end it with suicide, killing their own children with them. It is awfully hard to listen to these stories of women my own age. I don’t know if I will have the heart to listen to the stories of girls of my daughter's age, or will something change on this planet and women will begin to lead a dignified life. FotoEvidence has published Anahit Hayrapetyan fisrt book "Princess to Slave". It is available in our bookstore online. 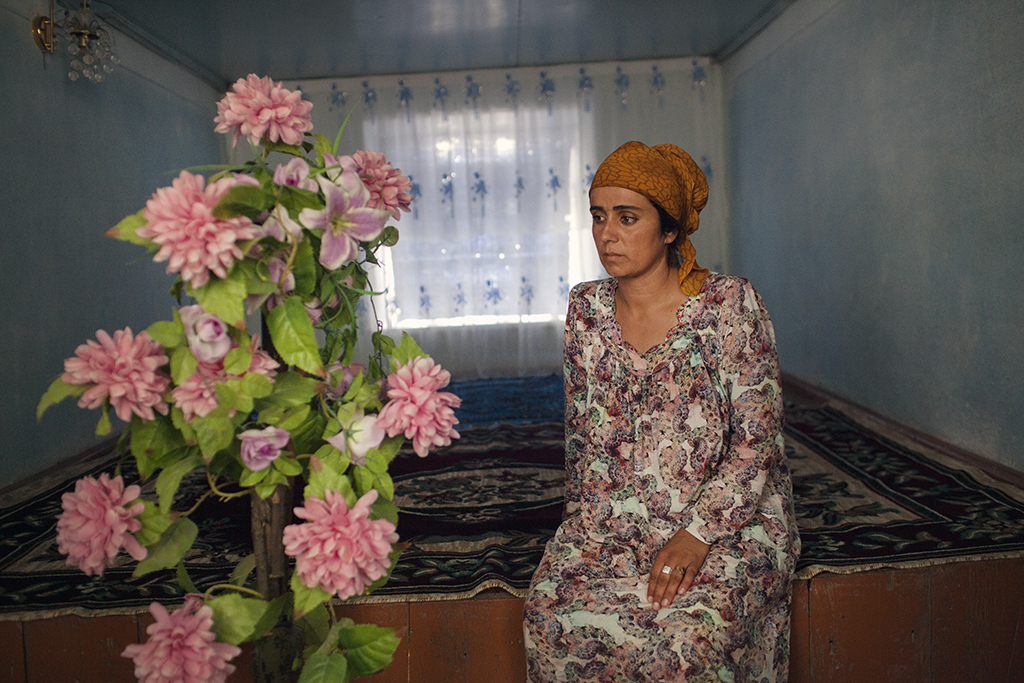 After Dogarzonova Sanovbar got married everything was going well, until her husband went to Russia to earn money. One day Sanovbar’s husband called her and divorced her by phone. After the first marriage, Sanovbar remarried to a man who had two ex-wives, making her the third wife of her second husband. They lived together for a while before she got pregnant. After giving a birth to her son, her husband divorced her. Sanovbar is now raising her son by herself. 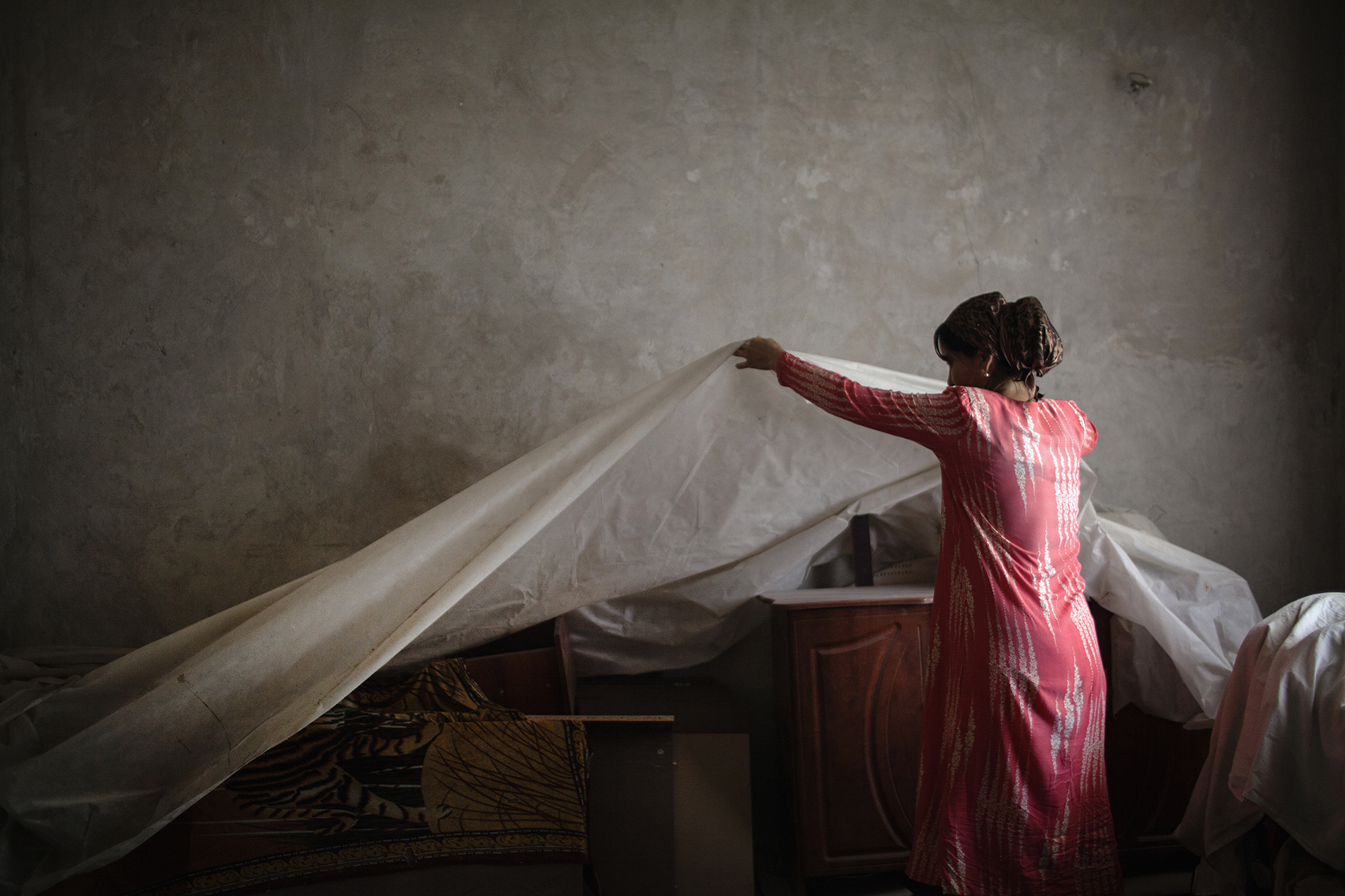 After getting divorced by phone, Shahnoza brought her dowry back to her parents’ house. In Tajik families it’s very important to give dowry to their daughters when they get married. 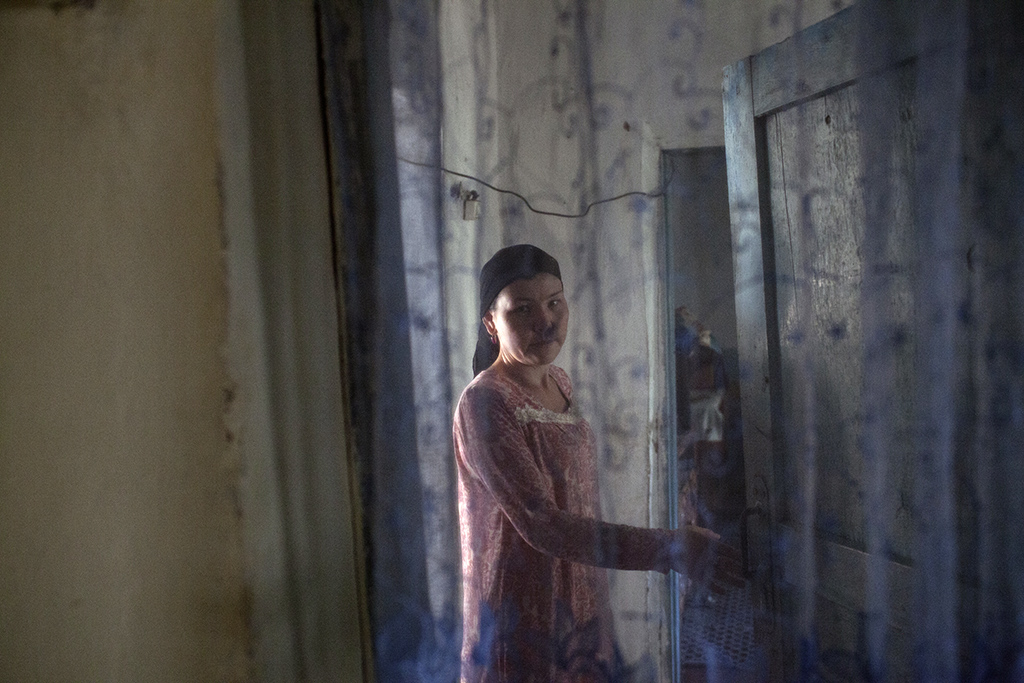 Toshmurodova Kibriyo is a 31 years old Uzbek woman, mother of two, works as a tailor. After living seven years in marriage, her mother-in-law passed away. Her husband started to bring other women to their house and also started to beat her. After some time, she became diabetic and with two childeren left her husband’s house. It’s been nine years that she has supported herself and her children alone. 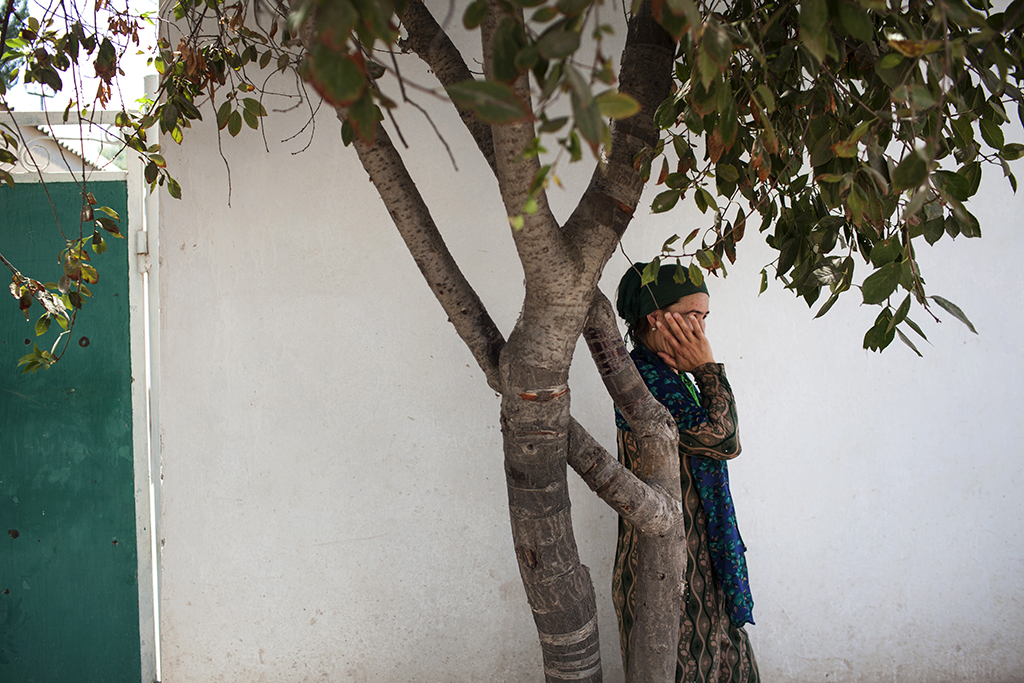 Karimova Saida in her village. She got married when she was 22 years old. She didn’t want to marry that man but, as she didn’t have a father,  her uncle was making decisions and he said that it was easier to marry not educated. They lived together seven years and they were good with each other. Then, her husband went to work in Russia. When she called him, she heard a woman’s voice. Her husband denied there was another woman in his life. But, one day, after another phone call, he said that the woman was his wife. When he came back, Saida was sent to her parents’ house and never went back. 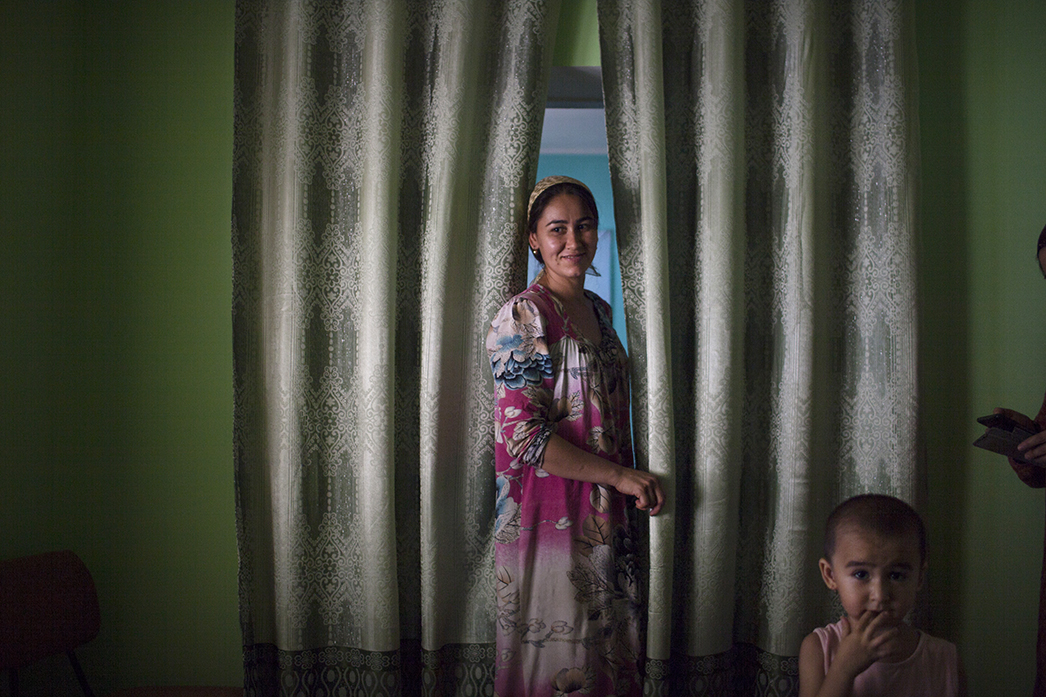 Kholnazarova Shahnoza, 30 years old, with her daughter.Shahnoza is one of the sisters in Khonazarov’s family with the same destiny. Two sisters divorced and moved back to their parents’ house. There was always violence in Shahnoza’s family. She was beaten several times. She was six months pregnant when she started bleeding. Only her mother went with her to the hospital, the child was born alive, but couldn’t survive. As he was born alive, the family gave him a name and buried him. Nobody from the husbands family came to the funeral. After that, Shahnoza gave birth to a daughter but the husband’s family insisted that it was not his child, that it was from another man. Shahnoza even agreed to make a DNA test. But they didn’t. Instead, her husband called her divorced her with a phone call. 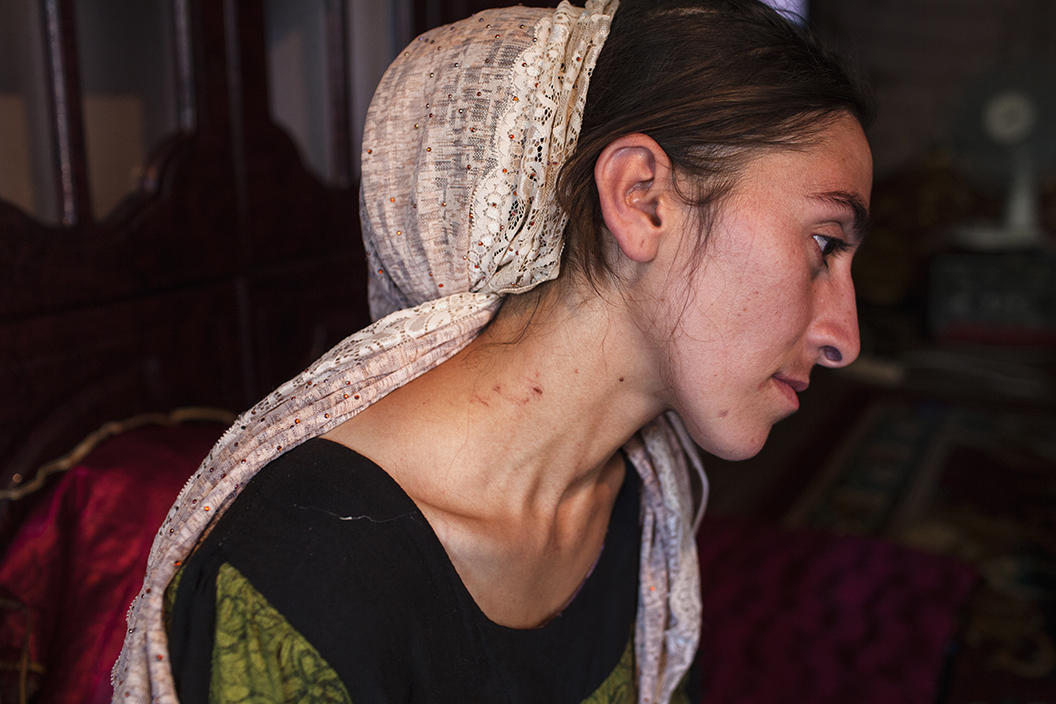 Nazira Barotovo, 25 years old, shows the traces of violence on her neck. After getting divorced, the court gave her and her two children a room in her ex-husband’s house. The room is simply separated by a temporary wall from her ex-husband’s house. Only a room without toilette and kitchen. Nazira tried to move back in with her parents, where the house is in a better condition, but she was beaten and kicked out by her cousin. Nazira’s husband used to work in Russia. She didn’t have any information about where he was and she decided to make an announcement in the local newspaper to see if people knew where her husband was, so she could get alimony  for her children. Nazira is working hard to take care of her two small children. 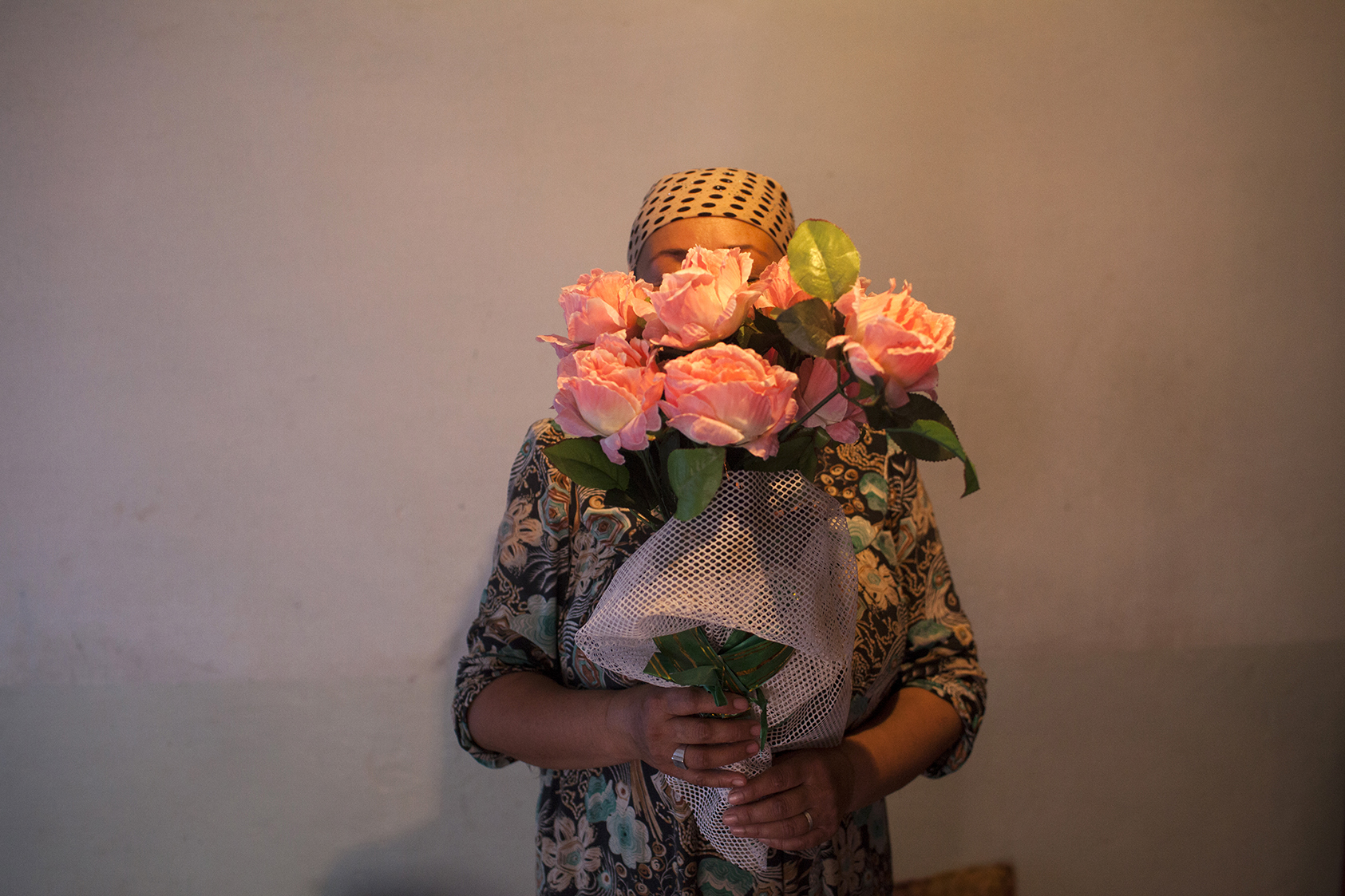 She was married for 20 years. Her husband was drinking and beating her all 20 years. “If you ask my neighbors, they will tell you that I am a hero, that lived through all that,” she said. Her husband is the son of her uncle. They have now three children, two girls and a boy. The elder daughter is 18 years old. She didn’t attend school after her fourth class, as it’s easier for a woman to get married if she is not well educated. Nine men came to them wanting to marry their daughter, but they will marry her once they gather some money for that.