The Longing of The Stranger Whose Path Has Been Broken 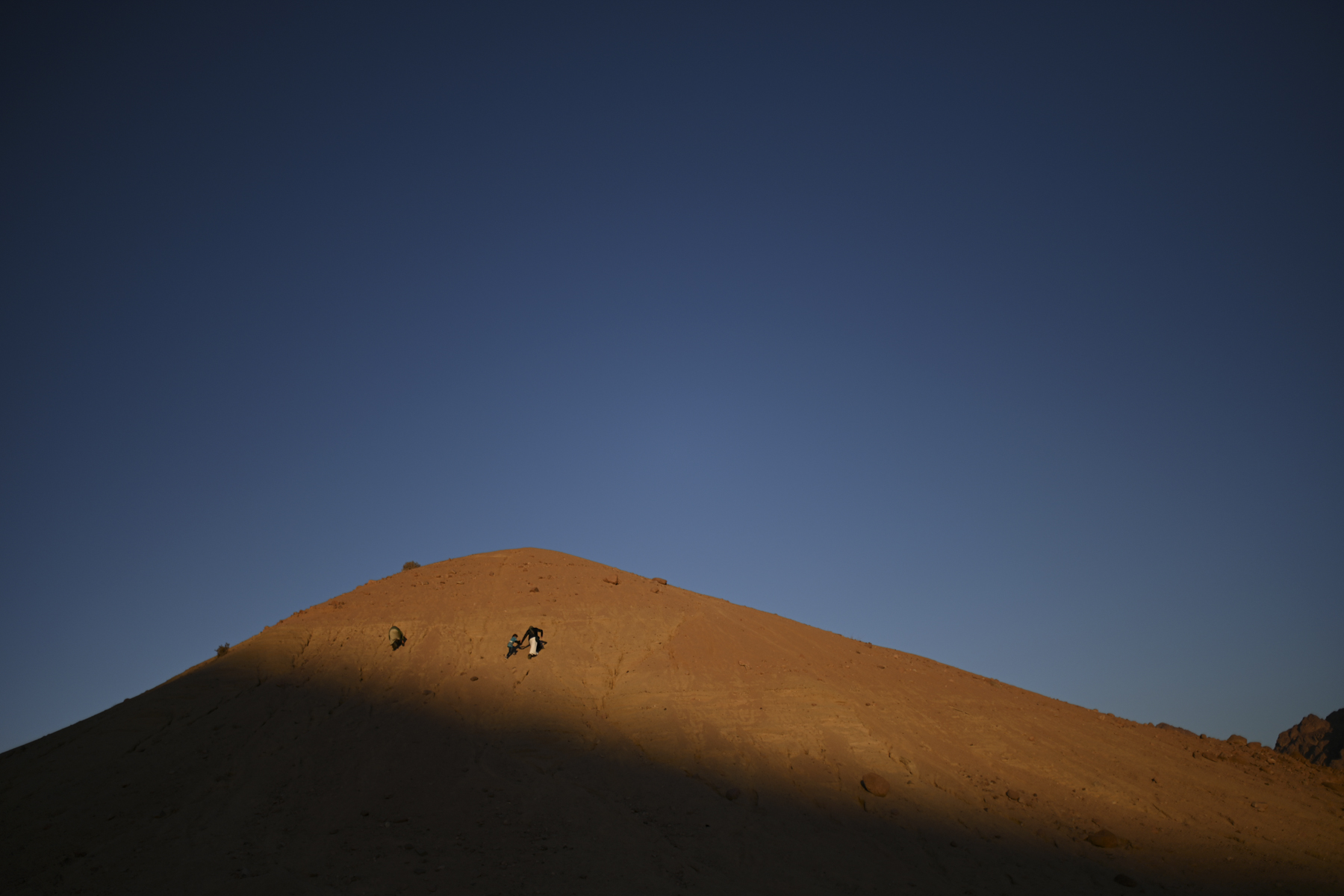 Thank you! Well, the stranger started off to be me but then as the project unraveled the stranger became a much bigger reference.  I started working on the project because I wanted to understand what it means to belong and re-root myself to my estranged Bedouin ancestry. My family history has been a mystery to me for a long time. But having a peculiar last name The Guide gave me a piece of the puzzle that led me to learn about my Bedouin and Palestinian roots. Although throughout the years I have built a profound connection with the Sinai Bedouin community who’ve participated in the project, I struggled to understand my position within the community. The project helped me make peace with the fact that I’ll always be a stranger in a way. And that’s okay. This was the inspiration to invite the community to be participants in the creative process and to have control over their representation. Turning the work into a community project. As we worked together to explore the process of seeking belonging, I’ve found that the notion itself is defined by the interconnectedness of people and land. How much we depend on the land to survive, to find food, to find home and to find our identity while protecting and nurturing it in return. Yet, many of us have lost connection to the land, leading us wandering in the world looking for where we belong. As the project carried on, I realised that the stranger is not just me. The stranger is all of us, spending the majority of our life finding our path that has been broken. The title of the project is translated Bedouin poetry by Mamoud Abu Hussein شوق الغريب للي تقطع سبيله. 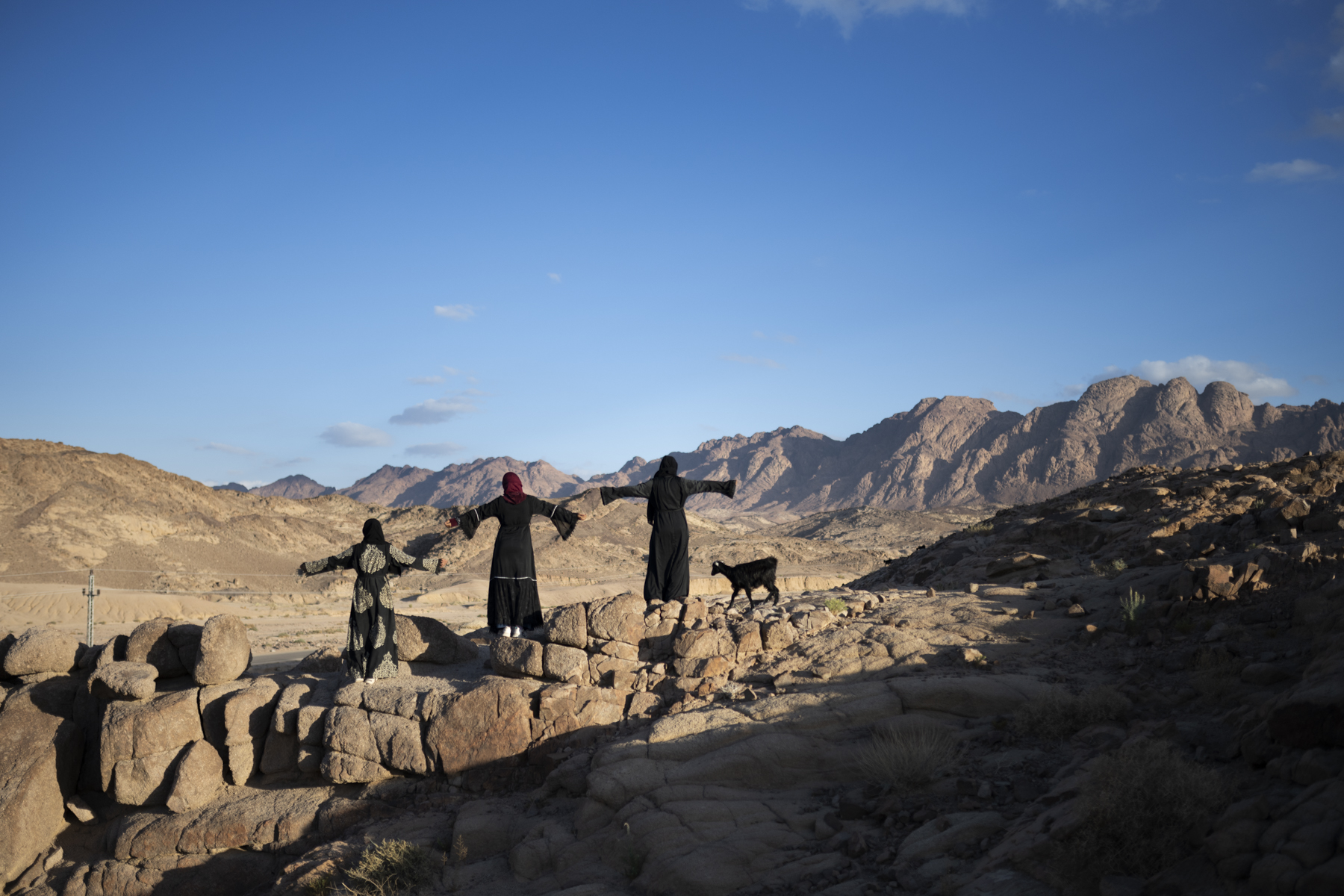 What led you to the Bedouin Community of South Sinai, Egypt for your work. “Blood calls”?

Since I was little I was connected to Sinai. My father would tell me stories about how he was stationed there during the war and we would spend many holidays there as well. As I became a teenager I started traveling to Sinai more frequently and establishing connections with the Bedouin community eventually becoming partially based there. By 2009 I became a civil activist for Bedouin community rights. And in 2018 in collaboration with tribe elders we opened a volunteer-led community clinic in the heart of the mountains, providing free medical services. For more than half of this time I was not aware of my Bedouin roots yet I felt a deep spiritual connection to the community and the land. I had this unexplainable feeling of acceptance, of forceless belonging.

What was the initial idea for this work and how the project evolved during the last seven years? How the community participated in the storytelling?

The initial idea for the project was for me to try to make sense of my estranged Bedouin ancestry. I wanted to learn from the community what it meant to be Bedou’. I felt a longing towards this sense of security knowing where you are from where you belong, that the community had. And I was unable to obtain it given the lack of archives on my family history. Along the way I realized that in order to move forward I had to involve the community in a much greater level. Their voices needed to be seen visually. I could not move forward with the project speaking on the community’s behalf. It felt wrong, forced and fake. It took me years to understand this and understand the importance of representation and agency.

The community first participated in discussions about belonging, telling their stories of the land and the community. I struggled to include visually many of the female participants given how their images have previously been misused and mis-contextualised by photographers in the past. I was sitting with Hajja Rabia one day and I asked if I could take a picture of her. She smiled and asked if I could draw her instead. Inspiring me to think outside the camera for answers. Female participants started taking part in the project visually by adding embroidering onto photographs I take of them. Using the traditional medium of embroidery, female Bedouin members had the freedom to reveal and hide their images. Taking full control over their representation. Older members wanted to create an archive about the Sinai flora by foraging plants and handwriting its medicinal use.  Together, we created a Field Guide including images of the plants and information about its use.  Male participants also took part by sharing their poetry. Poetry is in the Bedou blood, it is a daily practice for self-expression. Many of the poems collected were about the land, how much it gives back as the community, the keepers of that land, protect it. An interconnectedness forged over the centuries. 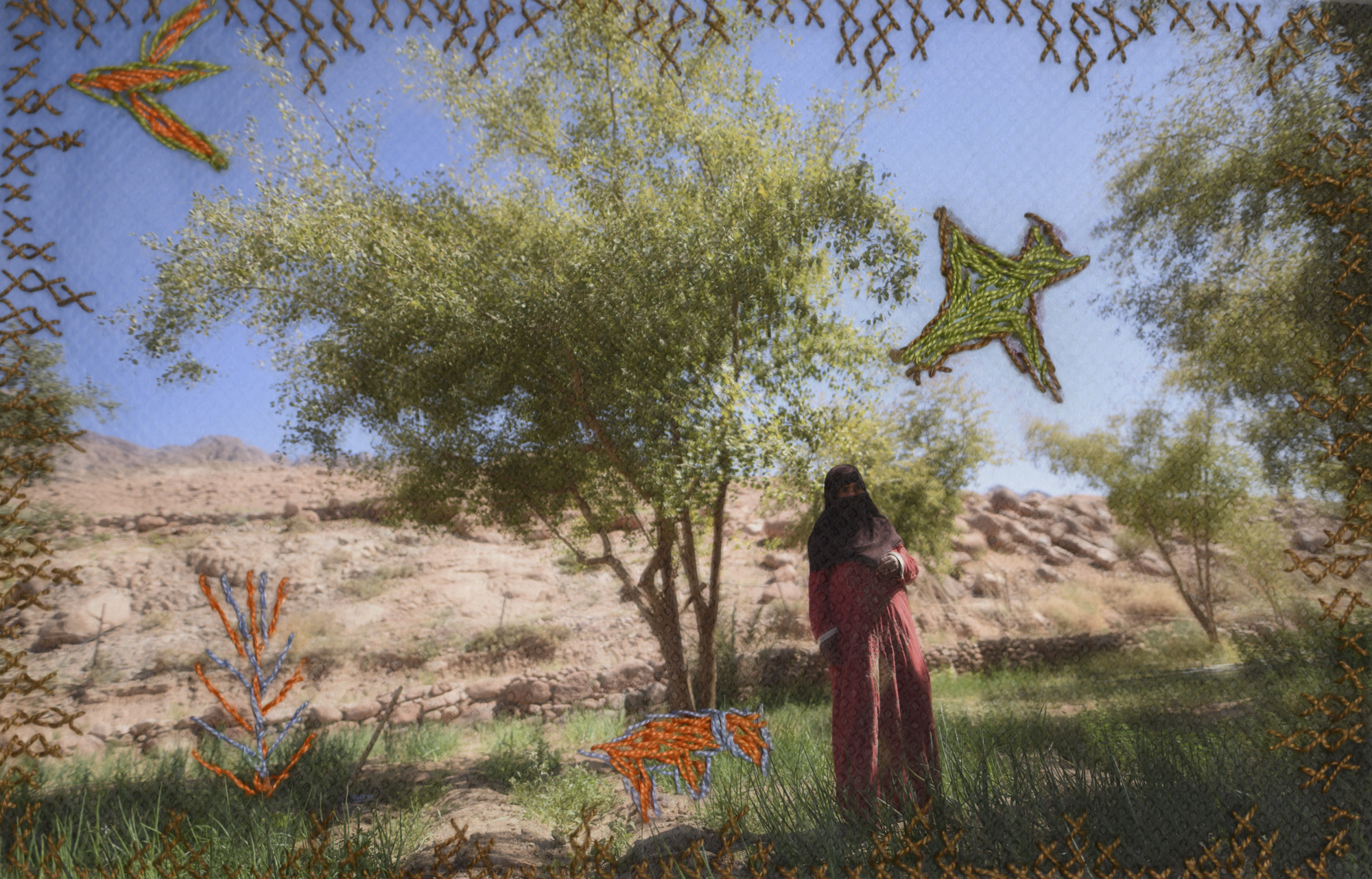 You collected seeds and plants, poetry, and embroidery along with the photographs of people and places. What story do you want to tell us in this book?

Although it seems like many, maybe too many elements to be included in one book, I want to create an experience. Where the audience would immerse themselves into these elements transitioning them to a space for self-reflection. I also consider this book as an alternative archive woven by the Bedouin community themselves. These elements are the visual voices. The book serves as a bridge between the Bedouin community and the western audience who’ve long seen Bedouins and other ingenious communities through a romanticized gaze. 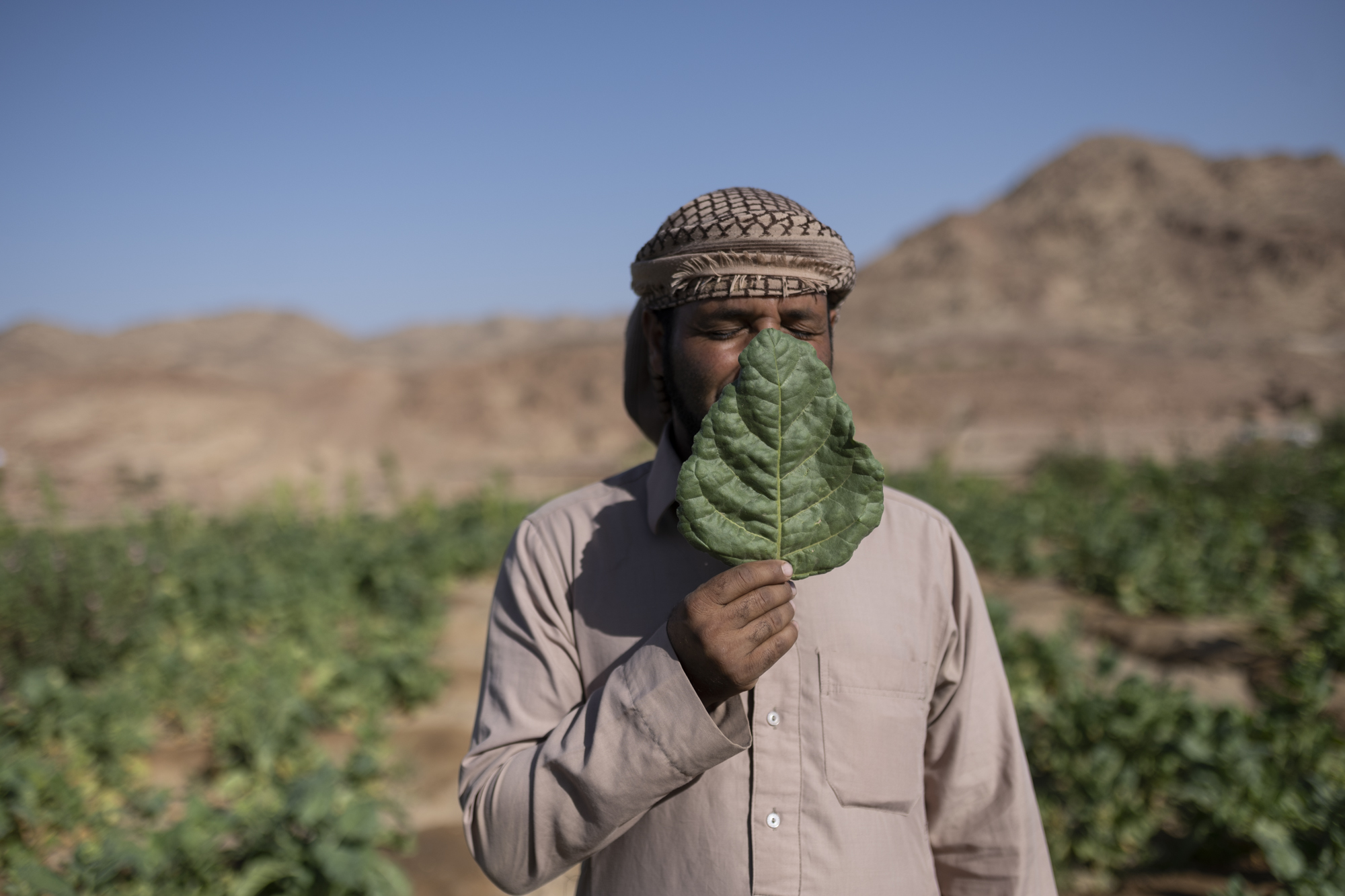 Is it true that your book will be the first physical book in the Bedouin community and about them because their entire archive has been stolen?

There are books about the Bedouin community. There are also many books on the nature of Sinai with a simplistic description of the community inhabiting it. But this book will be about the Bedouins by the community themselves. Challenging many stereotypes and traditional documentary approaches. During the israel occupation many archives and documentation on the community were corrupted or stolen, manifest of families is now unreachable which possibly had information on my family as well. I hope with this book a new archive would be created and used to reconnect younger generations, who are seeking acceptance and opportunity elsewhere due to the lack of support and resources, to their identity. I hope with this book I’d honor the stories of the community who’ve given me so much and helped me find where I belong.

You have been working with renowned photojournalist and mentor Tanya Habjouqa from the beginning of this work. How she helped you shape the story and now the book?

Tanya has been a crucial part of the development of this project. Before meeting her I was struggling to make sense of what I was doing and I was very insecure about whether I had the right to narrate this story or not. Tanya encouraged me to step out of the traditional documentary form, to be true to myself and to be aware of the community’s agency in the project. Without her guidance this project wouldn’t have been possible. I’m extremely grateful and honored that Svetlana selected her to be the book editor. She knows this project inside out, there is no one else I’d rather work with to finally bring this project to life. I hope with her help and the designer’s Bayan Dahdah, we’d create a book that elevates traditional photobooks and creates a space for dialogue, self-awareness and understanding.

The publication of the book completes your long years work. There is an empty bookshelf in the St. Caterina center awaiting the book. What is your plan after the book is published?

Exhibitions! I want to exhibit the project everywhere and bring the community with me through their stories. The more the project reaches people, the more impact it could create. I also hope my experience with collaboration would encourage more visual storytellers to consider collaborating with their protagonists. That’s why I also plan to conduct talks to the public and practitioners and invite community members to speak as well. Bringing this back to Sinai, I plan to use part of the book renue to support the community clinic and of course donate the book to the community. I hope the book will keep developing through the years as it lives among the community and inspire more insider narratives. In a way, the book is a beginning of a new chapter for this project rather than completing it. 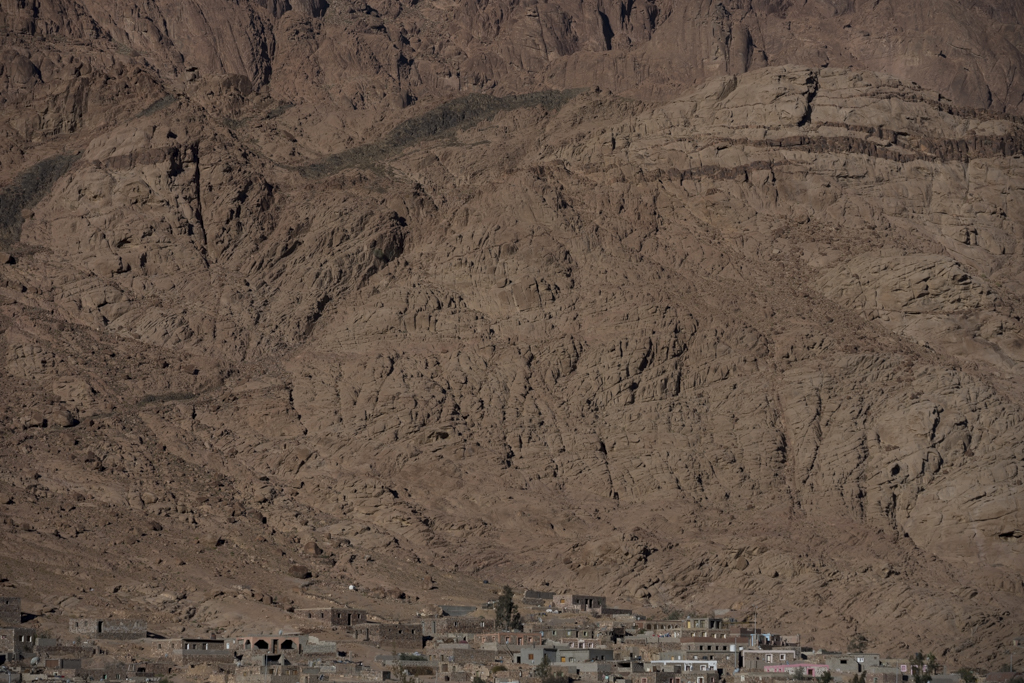