Sara Anjargolian is a documentary photographer and attorney focused on visual storytelling projects that seek to participate in the process of social change. Her work has been recognized and supported by the United Nations, Open Society Foundations, Fulbright, UCLA School of Art & Architecture (Make Art / Stop AIDS), Photophilanthropy, the Tufenkian Foundation, and the Yerevan Press Association. Her body of work has been exhibited widely and most recently includes stories illuminating topics such as: non-combat deaths within Armenia's military, life on the front lines in Nagorno-Karabakh, refugee life along the Azerbaijani border, AIDS and drug-resistant tuberculosis among the Zulu people in South Africa, “How We Live” a photography installation, book and film documenting poverty in Armenia, “Not Here” a project focusing on labor migration from Armenia to Los Angeles, and, “Zenne Dancer” a feature film in Turkey about the honor killing of a gay man by his father (for which she served as the still photographer). Anjargolian graduated summa cum laude from the University of California Los Angeles with a degree in Political Science/Public Policy, and then went on to law school, receiving her law degree from the University of California Berkeley.SB. In your recent work, "An Absent Presence," you have been witnessing and documenting the challenges of non-combat fatalities in the Armenian military today. What did you discover?SA. I have been documenting social justice issues in the former Soviet republic of Armenia for years, and the topic of human rights abuses in the military was one of the most difficult I have tackled. Not only are the activities of the military shrouded in secrecy under the guise of “national security,” but I discovered that the entire system in all sectors and at all levels - including the investigators, the medical examiners, and the courts - is set up to conspire against the truth. 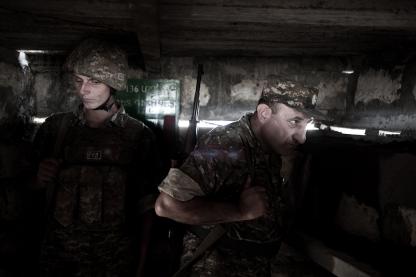 SB. Human rights groups believe that many reported suicides in the Armenian army are really homicides involving complicit army officers tampering with evidence and covering up these crimes. Is this the case?SA. Yes, human rights organizations estimate the number of non-combat deaths since Armenia’s armed forces were established to be between 1500 and 3000 - although the facts of each case are deliberately convoluted. Most of the time, we don’t actually know what happened. Usually “something” triggers a situation where a soldier ends up dead - sometimes the situation is triggered by a commander who loses control, sometimes it involves a group of soldiers hazing one soldier, and sometimes a soldier witnesses illegal activity (like a narcotics trade as in the case of Valery Muradyan or the stealing of fuel as in the case of Arthur Ghazaryan) - and it seems that their witnessing of these crimes leads to their death, and a fake suicide is staged to cover up the murder.SB. How did you learn about these issues in the Armenian military and why did you decide to start working on this project?SA. I photographed a series of protests two years ago in Armenia’s capital Yerevan involving families of soldiers who had died in non-combat situations and who were demanding that the military and government uncover what had happened to their sons. I wanted to know more about this situation and began working on the project.SB. Was it difficult to enter and photograph inside one of the most secretive institution in Armenia?SA. Photographing on the frontlines and military bases was not the most difficult part - what is difficult is finding out the truth of what happened in these cases. The military and legal system is set up such that facts in these cases are buried in years of incompetent investigations, layers of corruption, and a complete lack of motivation in uncovering the truth. 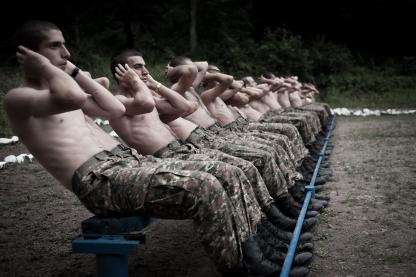 SB. The story you showed for first time in the "mOther Armenia" exhibit has two sides: the military that wants to present itself as a strong, disciplined defender of the nation and the families who lost sons to suspicious, non-combat deaths and question the discipline and integrity of the military: Where does the truth lie?SA. That is precisely the question I am asking through this work - how can these two realities exist next to one another? I would like for the viewers of this work to answer that question for themselves. The work is being shown at the Center for Contemporary Experimental Art (NPAK) in Yerevan through August 17. 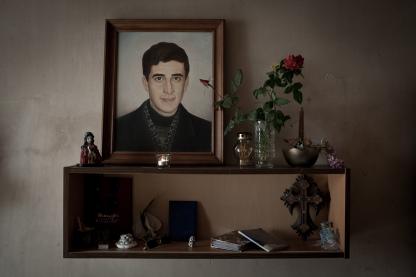 SB. How did the parents of the lost soldiers respond to your interest in telling their sons' stories?SA. Generally very responsive. Since the military and legal system has not provided a credible forum through which these families can seek redress, they are more than willing to seek alternative channels, such as the court of public opinion, to tell their sons’ stories. 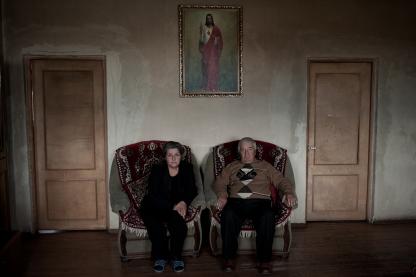 SB. Is there a story you heard that still haunts you?SA. What haunts me are the photographs the families shared with me of the way their sons were found at the scene of the incident - one hanging from a metal pipe, the other with a Kalashnikov in his mouth, the other with a bruised body - I looked at these images for only a day - these families live with these photographs, study them in detail day-after-day, trying to figure out what happened to their children. But what haunts me even more is the feeling in my stomach when I leave the families homes, or when I leave the frontlines - that sinking feeling of not being able to “change” anything. 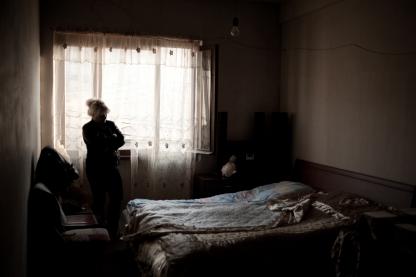 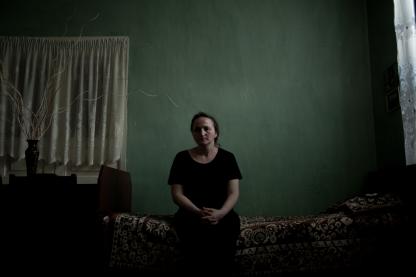 SB. It is an act of bravery to try to uncover what lies behind the deaths of soldiers that happened under mysterious and violent circumstances, sometimes even involving drug trafficking. Do you worry about your own security?SA. There are moments when I think about whether or not I should be afraid, but mostly I am so focused on the story and making sure the work is true to the essence of the situation that I don’t have much time to worry about it. Not telling this story is not an option.SB. How has the public in Armenia responded to your work?SA. Very positive and supportive so far. In conjunction with the Open Society Foundation office in Yerevan (which also funded the project) we are planning a panel discussion on the topic.SB. Do you think your work will prod the Armenian military to be more open about non-combatant deaths and help the families of lost soldiers find answers to their questions?SA. It is always difficult to define if and how social justice reportage will influence the situation it seeks to portray and illuminate. I define success as being involved in the process of change even if I personally do not see the final result. 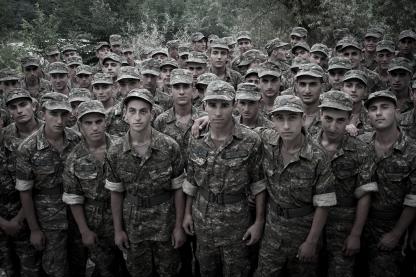 Conscripts at the Yeghnikner military base in Nagorno-Karabakh