Paula Lerner's passion for photographing people has taken her from the Amazon to Afghanistan. Since 1985 she has been commissioned by a wide variety of national and international clients in addition to pursuing her own projects. Her editorial roster includes Smithsonian, People, Time, Newsweek, and Business Week among others, plus a host of European and Asian magazines. Among her corporate and advertising clients are Agfa, Bright Horizons, Harvard, MIT, Boston University, Children's Hospital Boston, The Annie E. Casey Foundation and The Commonwealth Fund. Her personal work has been shown in venues throughout the northeast and has been part of national traveling exhibits.During 2005 and 2006, Paula traveled to Afghanistan three times to document the programs of the Business Council for Peace (a.k.a. Bpeace), an organization that helps women in post-conflict countries set up self-sustaining businesses. Her work earned her a VERA (Volunteer Excellence Recognition Award) from Bpeace in 2006. A multimedia feature of this body of work titled The Women of Kabul was published on The Washington Post web site in November of 2006, and was a Webby Award honoree. In 2007 and 2009 she traveled to Kandahar, the capital of southern Afghanistan, to work on a long-term project on women there. Her feature The Life and Death of Sitara Achakzai, about a prominent female Kandahari politician, was a Webby Award Honoree in 2010. Later that year she collaborated with the Toronto Globe and Mail to produce Behind The Veil, an Emmy-award winning multimedia feature about women in Kandahar, which was also a Webby Award Nominee and winner of a prestigious EPPY Award. In 2010 Paula, won EMMY Award for her work “Behind the veil” in collaboration with Toronto- based Globe and Mail.SB. How did you become interested in the story, that later led you to the Emmy Award for your work "Behind the Veil"?PL. Women's issues have been a theme in my work throughout my 25-year career. I began doing work in Afghanistan as a volunteer for a group called the Business Council for Peace, also known as Bpeace (www.bpeace.org), in 2005. My job was to document their programs, which help women establish and grow businesses in Afghanistan. The women's stories were very poignant, and I wanted to help bring them to a wider audience. Through Bpeace I met Rangina Hamidi, an Afghan-American woman who lives and works in Kandahar, capital of southern Afghanistan, and the Taliban homeland. She approached me to collaborate on a book about women in that city, and I was eager to agree. After making two trips to Kandahar in 2007 and 2009 to document women's lives there, I was approached by the Toronto Globe and Mail to collaborate on their multimedia feature about women in Kandahar titled, "Behind the Veil," which later won the Emmy Award for News and Documentary Programming. 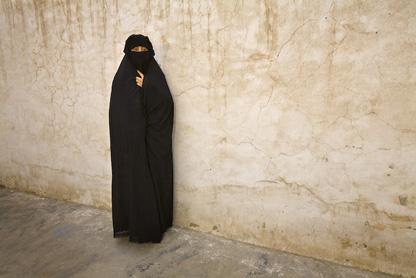 SB. You went to Kandahar from a western culture. Did you find it difficult as a woman professional in Afghanistan?PL. Afghanistan is a challenging place to work for many reasons. Since my topic was women's issues there, being a woman was an advantage, and allowed me access to places and people my male colleagues did not have. Men and women do not socialize together in Afghanistan, so being an outsider and a foreign woman put me in a unique position. A foreign woman in Afghanistan is something like being a third gender: as a woman, its okay for me to talk with Afghan men. As I am "outside" their culture the rules that apply to Afghan women don't apply to me in the same way. And, that I am middle-aged, married and the mother of two children gave me a place of respect and honor, which also helped. In addition, as a woman I am also free to talk to and spend time with women in Afghanistan in a way that foreign men are not. So being female per se was not difficult, but traveling there was certainly a different situation than traveling in other parts of the world.SB. How did you relate to the Afghan woman? How were you able to get as close as you did to their private lives?PL. It may not be obvious, but as women we had a lot in common. The first question out of their mouths when they met me was, "Are you married?" And the second question was "do you have children?" Marrying and being part of a family is a crucial way your status as a person is expressed in Afghanistan. Since I am both a wife and mother, we could relate to each other via this shared experience.As for getting close to these women, one thing I've found in all my work documenting women's issues, whether it was with welfare mothers, breast cancer patients, or Afghan women, is that having someone come from far away sit down with you and attentively listen to your life story, is in and of itself a very validating experience for the one telling her story. The women in Afghanistan couldn't believe that I would travel halfway around the planet to sit on their living room floors to patiently and attentively listen to them talk about their lives. They suddenly realized that their story was *worth* listening to, and they themselves had more value than perhaps they realized. If I did nothing else by doing this work, just being able to give these women that sense of validation was valuable and made it all worthwhile. 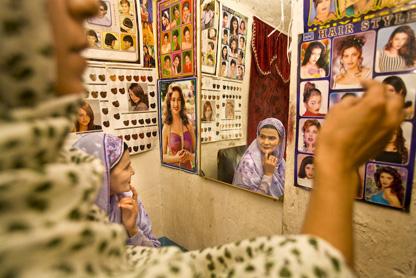 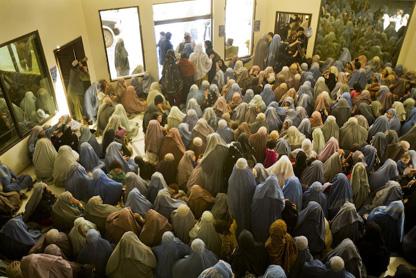