Diego Ibarra Sánchez, Co-founder of MeMo, is an awarded documentary photographer based in Lebanon.Diego assumes a very critical stance regarding the use of images in our own society, defining this historical moment as «lobotomized era of “tourism” on the other’s pain»: in his work he endeavors to ensure that photography is no longer merely a window allowing a view on what happens in the world, but becomes a means to raise questions and generate reflections. Diego Ibarra Sánchez’ gaze goes beyond the frontline, documenting and showing us all that is left behind after the bombings, the killings and the battles: a humanity that has nothing left beyond its life. He strongly believes in documentary photography as a catalyst, shaking consciences and showing the resilience and courage found in forgotten stories, always demonstrating a deep respect toward the story’s protagonist.In 2006 several grants made it possible for Diego to spend a year in South America to improve his storytelling process. Upon returning to Spain he worked for two years for the Catalan newspaper Avui, while still continuing his own photography projects. In 2009 Diego decided to move to Pakistan where he developed a strong visual body of work focused on Pakistan. At the same time he continued travelling to several other countries including Afghanistan, Bahrain, Libya, Nigeria, and Tanzania. He left Pakistan in 2014 and he is currently based in Lebanon while he keeps traveling and working on his projects around Middle East.He has been awarded with the Humanitarian award of AECID “Juan Bartolomé”, FINI´s Mexican University Photo Award, Aragón Journalism Association Award, First place at International Photographic Awards (IPA),  2 honorable mentions at National Press Photographers Association ( NPPA) and the Spanish Human Right Award with MeMo coop… His work has been exhibited in all around the world and his works has been highlighted during the screening nights of Visa pour L´image several times… among others mentions.How did the idea for the project "Hijacked Education" come to you and what is the project about? “Hijacked Education” aims to generate a personal statement to show how violence, extremism, intolerance and fear are wiping out the future of an entire generation of thousands of children. I started in Pakistan, in 2010, when I saw some schools destroyed a few months after the army operation against Mula FM terror´s regimen in Swat valley.  Kids were attending lessons under the schools’ wall decorated with the scars of war. Due to my cultural and personal baggage as the son of a teacher, I started trying to embrace this reality with my own aesthetic sense.  I was asking myself why Pakistan had so many attacks on education in the previously years. Then suddenly the Malala incident gripped the world’s attention. An advocate for education, she was shot in the head.  She survived and became a symbol and international figure. But she was able to leave while millions of students were still struggling to get education in the country. 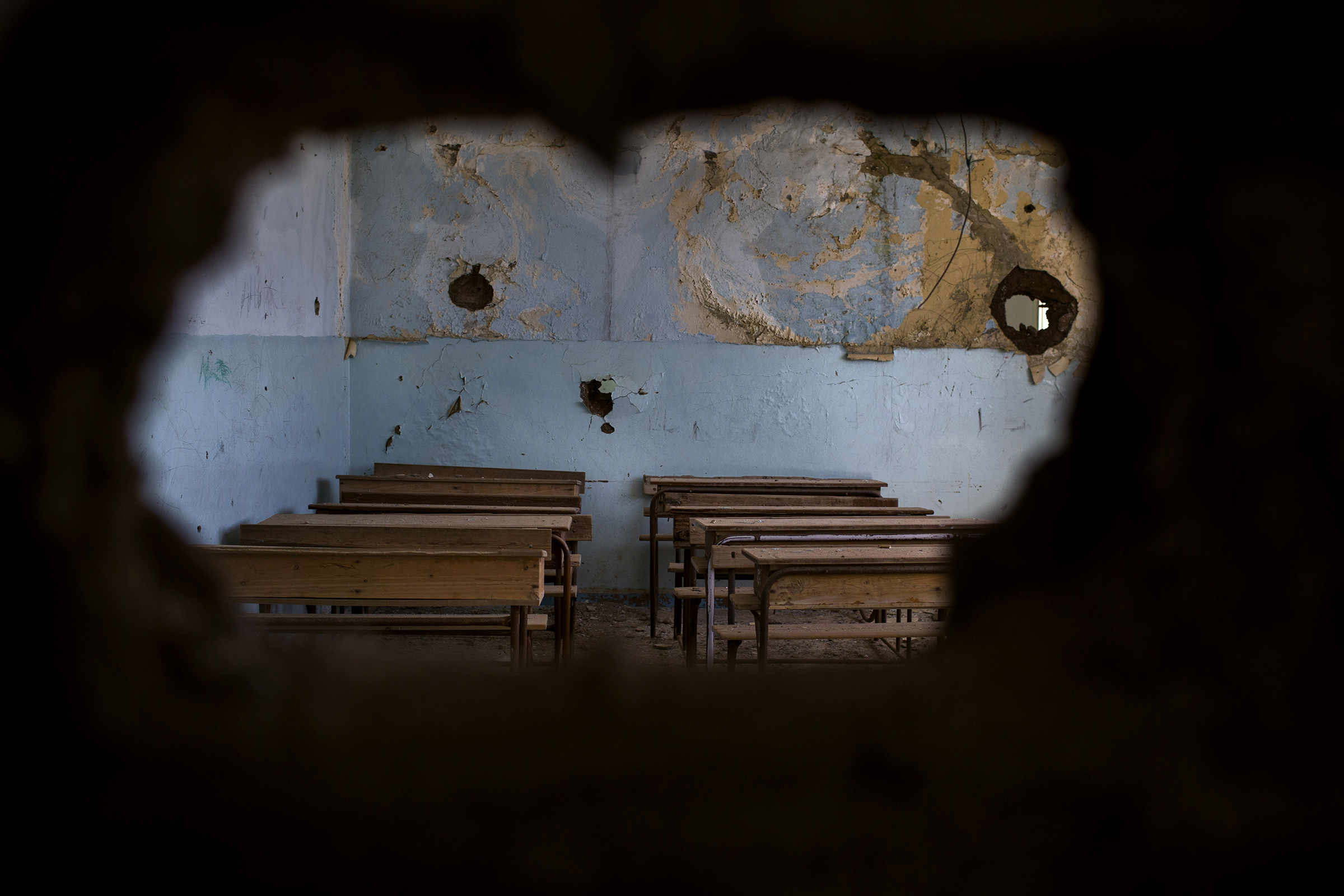 A view of a destroyed classroom, through a hole in a wall, shows the scars of the war inside the school of Tel Ruman. April 13th, 2016. Hasakah. Syria. The school remains closed after ISIS attacked it in July 2015. How many countries are included in the work? The fact that “Hijacked Education” does not have a territorial boundary is meaningful. The countries immortalized in my prints are indeed several, from several continents, to testify that wars and violence are all the same for these students. What is left after the nightmare is an incurable fracture in the survivors’ timelineThe project has taken me into countries such as Pakistan, Afghanistan, Iraq, Syria, Nigeria, Lebanon, Colombia, and Ukraine. Each country is like a tattoo for me. It has become part of me. War has many consequences. Why did you focused on the destruction of education?War is not finished with the last bullet, or empty bullet shell, or when the flag is raised. The open wounds of the war write with blood the future of millions of children.  Violence seeps into bordering countries that chaotically absorb a generation destined to grow up in exile.There are schools destroyed and abandoned. These are altars without shape of  lost learning. Teachers and students are in exile, and children as soldiers.  There are books burned, photographs on the ground, identities lost and stolen. There are empty classrooms, desks stacked, piled up, covered with the void of ignorance. It’s as if education has been kidnapped and raped.Time, a time bomb, stagnates in exile and blots the sheets of school calendars that will never return. 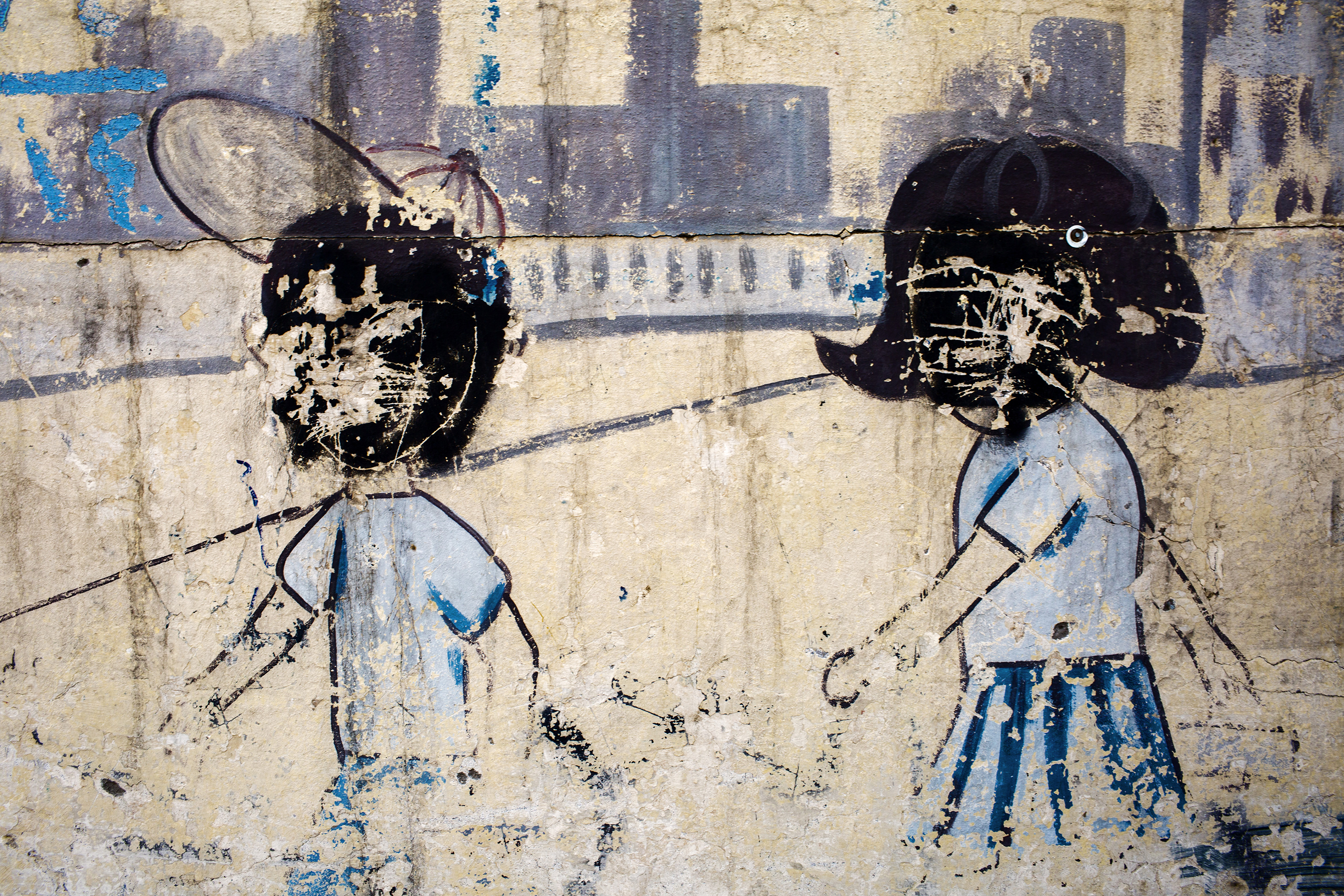 A draw in a wall defaced by ISIL in a wall´s school of Eastern Mosul. Islamic State fighters defaced anything they deem to be religious or western idolatry.  East Mosul, Iraq. April 12th, 2017. Diego Ibarra Sánchez / MeMoYou are planning a book. What do you expect will be the impact of such publications? Who do you hope will see the book?I´m still working on it. Indeed, I worked a lot this year in Ukraine. I want to make something unique, to raise questions, using a particular aesthetic sensibility, instead of giving stereotyped answers to bring the viewer’s attention to the focal point of this tragedy.  Photography is not anymore just only a tiny window to show this tumultuous world. It’s a personal statement that is coming as a part of years of personal experience, so I’m trying to bring more elements into my storytelling process; not only my pictures. It has become a polymorphic project The impact? To reach as large an audience as possible; to create legacy and to draw attantion to attacks on education not only to a high level and political spheres but also to students.  Why are armed actors using schools as military bases? Why are more than 75 million children and young people (aged 3-18) out of school in 35 crisis-affected countries. Why does less than 2% of global humanitarian aid go toward education? Why are some countries nuclear world powers with the lowest rates of education? War and violence is not only an endemic disease in war torn countries.  Arms sales are led from first world. Spain has beaten its own record with €4.3 billion in weapons exports this year. We need to raise questions about the role of first world arms exports in destroying education for millions of children. 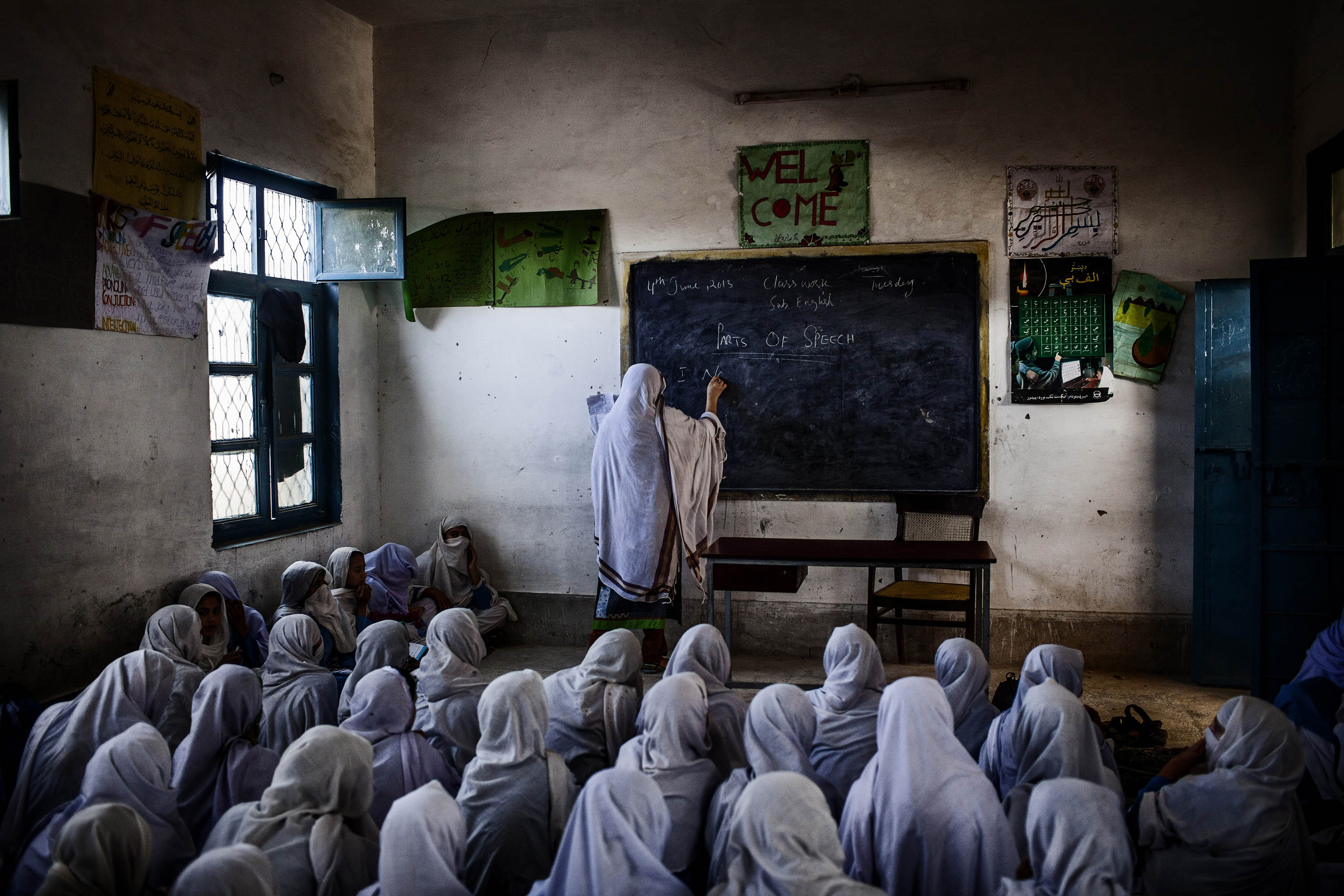 A young female student group attends lessons at her school attacked on December 21, 2012, at the night in Nowshera, Khyber Pakhtunkhwa, Pakistan. June 4, 2013. (Diego Ibarra Sanchez/MeMo)Destroyed schools, murdered teachers, threats, intolerance and hate are crippling the education system in Pakistan as schools are increasingly targeted by violence. The Taliban's violent campaign to stop girls from getting an education was put back in the spotlight when gunmen attacked Malala Yousafzai, a schoolgirl education activist. The attack was just one small piece of a long campaign against the country's education system. How did you become photographer? I was 13 years old when I had my first approach to a film camera. My father taught me photography with his old YAHSICA Electro.  He was an amateur but he injected photography into my veins.  Then in 1996, on a rainy summer day, a flash flood turned our campsite in the Pyrenees into `Dante's version of hell.' I was 14 years old. I was not allowed to be taking pictures at the campsite, as the death toll rose to 62, so I went to the sport complex to help with the distribution of blankets and water with one idea all the time in my head… to be witness through my camera. This was my first attempt to document. Now, after more than 22 years, I´m using digital cameras but my old Yashica always travels with me in my skin and heart.Who are your mentors?Life inspires my work.  Life is personal. Photography is personal. Love, pain, hope, family, friends, music, painting, photography or films: everything drives me into an unique experience and invites me to push myself to keep learning. A list of people who inspired me would be almost impossible to complete even with thousands of pages. But some remarkable ones are  the MeMo crew (Manu Brabo, Fabio Bucciarelli, José Colón, Guillem Valle) Alfonso Moral, Gervasio Sánchez, Francesc Melción, David Furst, Sandra M. Stevenson, James Estrin, Joan Roig and my noor.  Life makes me a humble and an eternal apprentice looking always to keep learning, breathing and sharing. 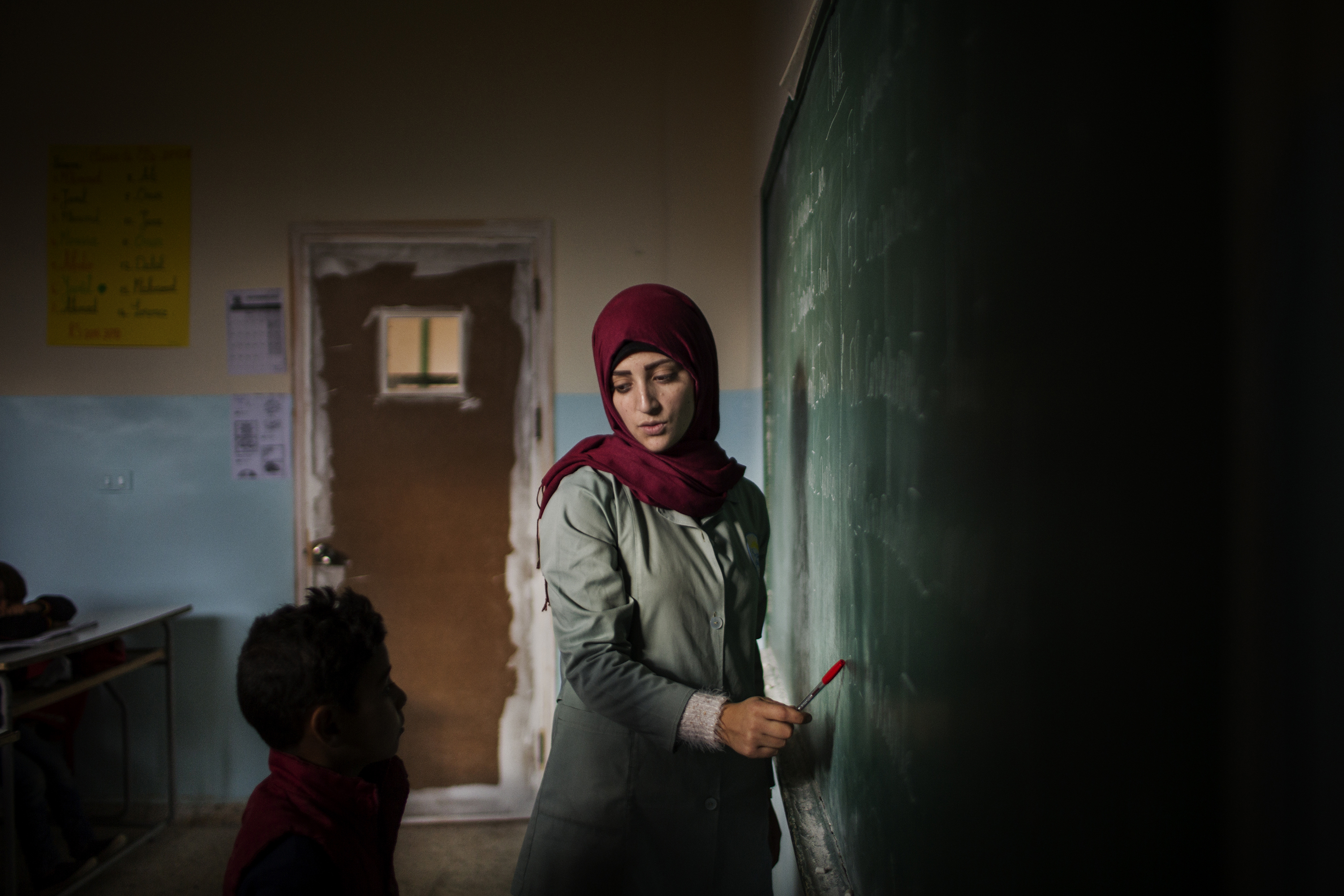 Outskirts Arsal, Lebanon. November 2017. A young Syrian refugee attends lesson outskirts Arsal. Limited resources and residency issues as well as work restrictions on their parents, are keeping the kids away from education. The open wounds of the war write with blood the future of millions of kids.  Violence seeps into bordering countries that chaotically absorb a generation destined to grow up in exile.